Controversial Fellowship Church in Grapevine outdoes itself with latest stunt

BY TERESA GUBBINS
QUOTE FROM: http://dallas.culturemap.com/news/city-life/09-06-18-fellowship-church-ed-young-wrestling/:
"A Grapevine megachurch known for outrageous stunts is outdoing itself with a new venture that involves wrestlers.
Fellowship Church, whose prior exploits have included such questionable bookings as caged lions and Oliver North, is launching a new series called "Wrastlin'." What a fun name for what is undoubtedly a deeply spiritual enterprise.
Fellowship Church pastor Ed Young says he grew up watching wrestling — which, not unlike some megachurches, is an entirely fake thing.
"Why wrestling? Because wrestling is all about entertainment!" Young says in a release that brims over with enthusiastic exclamation points. "I grew up loving it, and enjoying the entertainment of it. The church is in the entertainment business! People think that's bad, but it's good. We should entertain like no one else!"
Jesus himself was an entertainer, says Young. Forget that whole savior schtick.
"The word 'entertainment' simply means 'to capture and hold someone's attention for an extended period of time,'" he says. "That's what Jesus did, and that's what we're doing. Wrestling is one of the most used metaphors in the Christian life."" 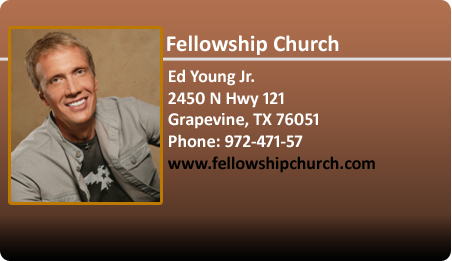 Wrastlin: Part 1 - The Battle of the Brothers
Ed Young & SPECIAL GUEST Sting
ED YOUNG: "Every day, whether we realize it or not, we are all facing a fight. We’re thrust into the ring and forced to engage in a wrestling match we cannot avoid. The great news is that we do not have to fight alone. In this message, Pastor Ed Young begins to look at the life of one of the most prominent fighters in all of Scripture, the Old Testament patriarch Jacob. And as we unpack Jacob’s battles with his own brother, we discover that victory in our lives has more to do with our trust in God
than it does our ability to fight."
SEE: https://fellowshipchurch.com/wrastlin
ED YOUNG TO PREACH PRO-WRESTLING SERMON SERIES FEATURING
"WWE'S" THE "UNDERTAKER", RIC FLAIR
BY Michael Gryboski
SEE: https://www.christianpost.com/news/ed-young-preach-pro-wrestling-sermon-series-wwe-undertaker-ric-flair-sting-ted-dibiase-227111/; republished below in full unedited for informational, educational and research purposes:

(PHOTO: COURTESY ED YOUNG)Ed Young, senior pastor of Fellowship Church of Grapevine, Texas (Left) and Mark Calaway, a World Wrestling Entertainment superstar commonly known by his stage name The Undertaker (Right).
Texas megachurch pastor Ed Young is going to have a professional wrestling themed sermon series in which he will interview notable wrestlers like The Undertaker, Ric Flair, Sting, and "The Million Dollar Man" Ted Dibiase.
The senior pastor of Fellowship Church, a multi-site congregation based in Grapevine, Texas, recently announced that the four-week series will begin on Sunday, Sept. 9.
In a Thursday interview with The Christian Post, Young explained that he had considered centering a sermon series on wrestling for years given how often it appears in the Bible.
"One of the most used metaphors in scripture regarding the Christian life is that of a wrestler," said Young, citing as examples Ephesians 6:12 and Jacob wrestling with an angel, as described in Genesis 32:22-32.
"It's a staple in our culture so I thought wouldn't it be cool to interview some of the most popular wrestlers in the world, to have them at Fellowship, and then to speak out of the scripture regarding wrestling?" Young said.
Each of the four pro-wrestlers will be interviewed, with three of the interviews being live and a fourth being prerecorded. Young declined to comment which wrestler would have the taped interview.
Fellowship Church's main worship stage will also have a wrestling ring constructed on it, with one section opened up for the congregation to better see him and his interviewee.
Young explained that this was his way of using "word pictures" and enforcing the metaphor of wrestling with God, which he said would be the key theme of his sermon series.
"The whole series is wrestling with God and it's a match that everyone needs to lose," said Young, noting that he did not consider the series to be "Christianity 101."
"It's really probably Christianity 401. But we're using 101 techniques, a big overarching picture everyone can connect with."
The Big Four
The four pro-wrestlers Young will interview for his sermon series are notable names in the professional wrestling industry, both in World Wrestling Entertainment and other companies.
Flair, Sting, and DiBiase are all in the WWE Hall of Fame and many speculate that the Undertaker will eventually be inducted in the near future.
Young told CP that his church was able to get such famous pro-wrestlers for the series because they "just worked our rears off to do it."
"We called and called and called," said Young, "we're friends with one of the wrestlers who knows all these guys and he was able to put us in contact with these wrestlers."
What also helped, explained Young, was that another professional wrestler he declined to name was friends with a pastor friend of his, which helped Fellowship connect to the notable wrestlers.
Trading the Gospel for Entertainment?
Some have criticized Young for the focus on pro-wrestling. When the senior pastor announced the sermon series on Twitter, some were quick to denounce the idea.
"Trading the Gospel for entertainment. This is a true picture of the seeker sensitive garbage that's infiltrating our communities. Foolishness to the max," tweeted one critic.
For his part, Young told CP that he seeks to "teach the way Jesus taught," pointing out that with his parables Jesus "used word pictures," as "most of what He said were stories, things that the culture could connect with."
"We're a Bible-teaching church, but we try to teach, to communicate the way Jesus communicated, which would be using word pictures and illustrations that our culture can identify with and then obviously explaining from scripture the deeper meanings behind these metaphors," replied Young.
________________________________________________________

Every Man Has His Price: Fellowship Church and Wrasslin’

BY SETH DUNN
SEE: https://pulpitandpen.org/2018/09/03/every-man-has-his-price-fellowship-church-and-wrasslin/; republished below in full unedited for informational, educational and research purposes:
Over at his blog, Tim Challies has an interesting piece about the folly of the attractional church model mega-pastor Ed Young consistently uses to fill Fellowship Church in Grapevine, Texas.  This month, Young’s attractional strategy is manifesting in the form of WWE Superstars Rick Flair, Sting, the Undertaker, and Million Dollar Man Ted DiBiase.  His “Wrastlin” series is previewed in the video below:
Three of these men are WWE hall-of-famers and all have proven for decades that they can draw a crowd (or “draw money” to use a wrestling term).  Two of them have been outspoken about their Christian faith.  This is a fact not mentioned by Challies, whom I doubt knows much about pro wrestling and its celebrities.  I, however, came of age during the Monday Night Wars, so I thought I’d make mention of some important details that Challies left out.
First, pro wrestling is a great metaphor for the Christian religion.  In pro wrestling, the action feels spontaneous but in reality, the outcome is predetermined by the owner of the promotion; the winners and losers are picked out long before the wrestlers ever face off in the squared circle.  If that doesn’t scream Divine election, reprobation, and predestination then I don’t know what does.  I doubt Ed Young and his headliners will make mention of such a theological concern, however. Young’s event is clearly a money grab.  Why else would anyone bring in main event talent like the iconic Sting and Flair?
Second, Ted Dibiase should be held in contempt by the Christian community along with Ed Young.  Unlike the other wrestlers Young is bringing in, Dibiase is actually an active evangelist who regularly preaches through the organization he founded, Heart of David Ministry.  Sting (real name Steve Borden) is also a professed Christian, and it should be noted that he did not perform in WWE until the McMahons (its owners) cleaned up their Attitude Era act.  Not much is known about the personal life of the Undertaker (real name Mark Calaway), he rarely breaks character and did not even do so for Young’s preview video.  Ric Flair would bust Hell wide open if he died.  Flair has basically lived the life of his “Nature Boy” wrestling character, a profligate free-spending playboy.  Flair is famously hard-up for cash and would likely appear anywhere for a payday.  That a purported Christian minister like Dibiase would headline a church with a man who is so clearly lost is inexcusable.  The words of Dibiase’s “Million Dollar Man” alter ego ring true: “Every Man has his price.”  It could very well be the case that Dibiase and the many other wrestlers who have found paydays as preachers after their wrestling careers ended are kayfabe Christians who are no more genuine than their in-ring personas.  They are still in the business of making an appearance for a payday.
Finally, I want to say a word about what Challies seems to be missing: an appeal to Ed Young’s Texas Redneck target audience.  Challies refers his readers to the work of John MacArthur and Jared Wilson and the wisdom of James Montgomery Boice.  While these references may be helpful to the regular readers of Challies’ blog, I imagine people who come to church to see the Undertaker don’t have much concern for reformed thinkers.  Challies addresses the situation at Fellowship Church in an almost academic fashion, giving a critique of the “attractional model.”  This gives far too much charity to Ed Young.  Maybe he’s just a promoter looking for a payday and church has nothing to do with it.  If the Freebirds and Von Erich’s were still alive, I wouldn’t put it past Ed Young to have them wrestle in the church building.  He’s literally turned his church into a circus in the past so doing so wouldn’t be a stretch.
Listen wrestling fans, the lady who edits this blog was friends with Curt Henning and Rick Rude.  I was there when Goldberg beat Hogan for the belt.  I like Sting (I have a nWo Wolfpac shirt somewhere at my parents’ house) and I like the circus, too, but why in the world are you okay with Shotgun Saturday Night bleeding over into Sunday morning?  If you go to Ed Young’s church, Vince McMahon might as well be your pastor.  You are being a sold a show.  You are not being discipled and grown in Christ. You are Ed Young’s mark. Wise up and get into a genuine church that’s not just another show.  If you want help doing so, contact us at talkback@pulpitandpen.org.
And that’s the bottom line because Seth Dunn said so…

Posted by John at 5:54 PM Links to this post