THE WAR ON CHRISTMAS CHALLENGED BY ONE IN CONGRESS

THE WAR ON CHRISTMAS

Published on Dec 16, 2015
Rep. Doug Lamborn (R-Colo.) has introduced a resolution expressing the sense of the House that “the symbols and traditions of Christmas should be protected for use by those who celebrate Christmas” amid warnings from the right that religion is being pushed out of the holiday. http://www.infowars.com/house-republi...

At least 3 million foreign nationals were granted work permits, work visas, and green cards in 2013, with most being granted to individuals from Mexico, China, and India, according to the most recent data issued by the Congressional Research Service.
While the 2014 numbers have not been disclosed, recent statistics provided to Congress reveal that work permits continued to be issued at record numbers, according to congressional sources and statistics provided to the Washington Free Beacon.
This includes about 1 million green cards with work authorization, 1 million employment-based nonimmigrant visas for foreign workers, and 1.2 million work-permit authorizations for foreign nationals.
The disclosure of the ongoing uptick in visas and green cards comes amid a larger debate on Capitol Hill about tightening immigration restrictions in light of recent terror attacks and concerns about the U.S. workforce.
The total number of foreign workers in the United States stands at 26 million as of 2014, according to numbers issued by the Bureau of Labor Statistics.
“All foreign nationals who gain lawful permanent resident status in the United States are eligible to work, regardless of what preference category or class they entered through,” according to a congressional research memo obtained by the Free Beacon.
These numbers are likely to increase in the next year as Congress prepares to approve a sprawling funding bill that critics say will do little to alter Obama administration plans to boost work permits and visas, as well as permit some 10,000 Syrian refugees to relocate to America.
“The omnibus will fund 100 percent of the continued issuance of work permits, work visas, green cards and refugee admits, continuing to accelerate the U.S. beyond all known historical immigration precedent,” said a congressional source familiar with the yearly spending bill. “The U.S. presently has four times more migrant residents than any other country in the world, regardless of population.”
The U.S. immigrant population—both legal and illegal—hit a “record” 42.4 million in 2014, according to the Center for Immigration Studies.
Congressional critics, among them Sen. Jeff Sessions (R., Ala.), have criticized the funding bill for giving the Obama administration a “blank check” on the immigration front.
“As currently written, this year’s appropriations bills … amount to a blank check for the president to carry out his refugee resettlement plans,” Sessions said in a recent statement.
“Not only will the president be allowed to bring in the 85,000 refugees he has announced on top of current record immigration levels, but this will include at least 10,000 refugees from Syria who will subsequently be able to bring in their foreign relatives,” Sessions said, noting that all of the refugees “are eligible for lifetime government assistance and can draw funds from Social Security and Medicare at Americans’ expense.”
More than 90 percent of recent Middle Eastern refugees who have come to America are on welfare, according to Sessions.
The U.S. Census Bureau “projects that, on our current immigration policy baseline, every single year the total number of immigrants in the United States will increase, the annual rate of immigrant admissions will increase, and the foreign-born share of the population will increase,” according to information published by Sessions’ office.
Additional polling data collected by Pew shows that 83 percent of the public would like the level of immigration frozen or reduced, including at least 92 percent of Republicans polled.
Sessions has further warned that the costs associated with resettling refugees and providing them welfare benefits have not been offset.
“The net cost of resettling 10,000 refugees averages out to $6.5 billion over the lifespan of those refugees,” Sessions wrote in a recent letter to congressional appropriators. “The president’s proposal to resettle 85,000 refugees this fiscal year alone will result in a net cost of approximately $55.25 billion.
On the work permit front, non-Middle Eastern immigrants account for the largest percentage of foreign nationals in the workforce, according to labor statistics.
“Hispanics accounted for 48.3 percent of the foreign-born labor force in 2014 and Asians accounted for 24.1 percent,” according to the most recent numbers.
Lawmakers are further seeking to boost background screenings for new immigrants. One such measure being considered by the Senate would mandate that the Department of Homeland Security and the FBI, among others, review an individual’s social media accounts to see if there are links to terrorists.
The State Department was recently sued for withholding information from the public about the administration’s refugee resettlement plan.
Homeland Security has had difficulty providing Congress with concrete statistics on the number of Syrians currently in the United States and of those how many are in the country on expired visas.
______________________________________________________________


Sen. Sessions says this hurts wages and reduces job prospects for native-born workers
BY ALI MEYER
SEE: http://freebeacon.com/issues/omnibus-would-quadruple-number-of-low-wage-visas-for-foreign-workers/; republished below in full unedited for informational, educational, and research purposes:
The upcoming appropriations legislation would massively expand the foreign worker program, quadrupling the issuance of low-wage visas, according to an analysis from Sen. Jeff Sessions’ (R., Ala.) office.
The H-2B visa program allows employers to hire foreign workers to come temporarily into the United States to work either in non agricultural labor or a temporary service job. For example, some workers who use the H-2B visa program could be employed as a housekeeper, an amusement park worker, or a landscape laborer.
According to the senator’s office, the language in the omnibus would as much as quadruple the issuance of these low-wage visas, which would replace Americans in blue-collar jobs such as truck driving, restaurant work, and construction. This is happening at a time when record numbers of Americas are not working at all.
“Our immigration system must serve the national interest,” Sessions says. “Flooding this loose labor market with additional low-skill labor hurts the wages and reduces the job prospects of those who are recent immigrants and native-born who are struggling the most.”
Sen. Sessions wrote a letter to his colleagues in Congress in November requesting that language that would increase the number of H-2B workers in the United States not be included in the Omnibus legislation.
“At a time when the civilian labor force participation rate in the United States is approximately 62.4%, now is not the time to advance legislation further depressing wages and employment for U.S. workers,” Sessions said. “Pew polling data shows that 83% of the voting public wishes to see the level of immigration frozen or reduced; it is high time Congress respected the will of the American people.”
______________________________________________________________

Senator Jeff Sessions Rebuts Senator Leahy's Argument That Muslim Immigration Is A Civil Right
Published on Dec 11, 2015
Of all the things candidate Donald Trump has said since announcing his bid for the White House, the one that has truly caught fire with the public, the press, and politicians was his suggestion that there be a temporary ban on Muslim immigration until the federal government can figure out how to properly vet immigrants. Conservative Review reports today that discussion of a nuclear security bill was hijacked in a Senate Judiciary Committee meeting by Sen. Pat Leahy (D-Vt.), who insisted on a “Right to Migrate” amendment that would bar the United States from banning an potential immigrant based on religion.

Sen. Jeff Sessions (R-Ala.) then delivered a rebuttal to Leahy that Conservative Review called “the mature conversation on immigration the rest of the ‘conservative’ establishment is unwilling to have,” adding that Sessions “not only destroyed his entire premise and false sense of morality, but expressed a set of important principles regarding the philosophical and moral underpinnings of a just and ideal immigration policy.” “Fundamentally,” Sessions declared, “foreign nationals living in foreign countries have no constitutional right to enter the United States. If they did, any alien denied entry could file suit to demand entry and claim damages for lost employment, lost welfare benefits, lost income.”

“Choosing who can immigrate into the United States is, by definition, an exclusionary process,” Sessions added. “The goal is to select immigrants for admission based on the benefits they provide to society based on skills, ages, values, philosophy, incomes, etc. Our goal is to choose for admission those likeliest to succeed and flourish and, crucially, to support our Constitutional system of government and our values of pluralism and Republican governance.” Only four Republicans opposed the Leahy amendment: Sens. Sessions, Cruz, Vitter, and Tillis.

Schumer, Gang of Eight Refuse To Say How Many Will Be Admitted Under Their Plan
June 2013

AMNESTY PUSHED BY TRAITORS
IN ANY OTHER COUNTRY THEY WOULD BE HANGED & DRAGGED THROUGH THE STREETS
SEE:
http://www.breitbart.com/big-government/2015/07/29/schumer-admits-i-recruited-marco-rubio-to-be-part-of-our-group-of-eight/ 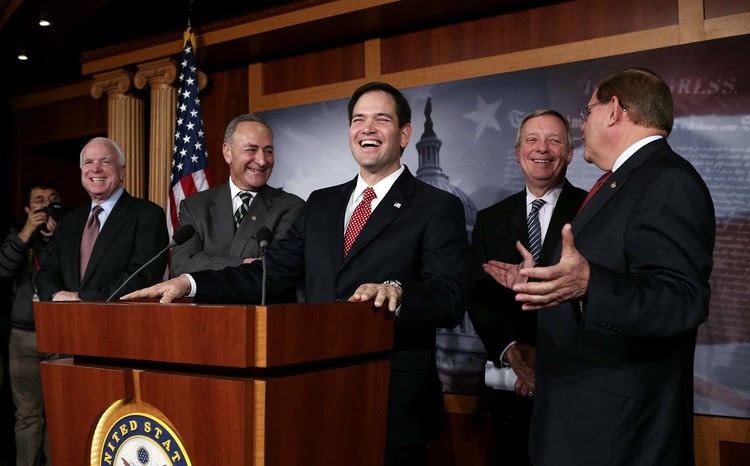 Published on Nov 17, 2015
When Marco Rubio teamed up with John McCain, Chuck Schumer, Lindsey Graham and Bob Menendez to push his Gang of Eight Amnesty scheme, he said he wanted to secure the border. But then Rubio voted against every border security amendment Ted Cruz and Jeff Sessions proposed. Every one! It was part of the deal Rubio made with Obama -- no amendments, even on border security. Ted Cruz was only in the Senate a few weeks, but it was his leadership that stopped the Obama-Rubio Gang of Eight Amnesty Bill. Ted Cruz: Secure the border. No welfare for illegal aliens. No path to citizenship. Enforce, improve and strengthen current laws. Marco Rubio betrayed our trust, failed us and he’s done nothing since coming to Washington but push for amnesty. Ted Cruz for President. Now. Before it’s too late.

Insider: Obama Rolls Out Red Carpet for Migrants
Published on Dec 15, 2015
Alex Jones speaks with immigration lawyer Michael Springman about how people who try to legally immigrate are stonewalled but illegal immigrants are treated like kings.