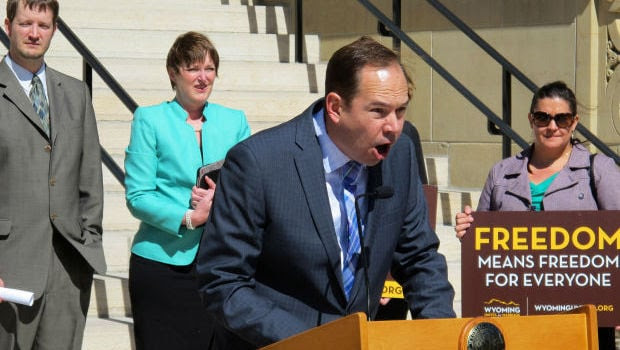 JERAN ARTERY, WYOMING EQUALITY
"Churches that lobby to have freedoms and rights taken away from ANYONE should absolutely have
their 501(c)3 status revoked!!"
JOHN 15:18-"If the world hate you, ye know that it hated me before it hated you."
CAN YOU SEE THE HATE?:

EASTER 2015: GAY GROUP DEMANDS
CHRISTIAN CHURCHES BE SHUT DOWN~
BUT ONLY THOSE WHO DON'T SUPPORT
SAME SEX MARRIAGE
by Warner Todd Huston, April 2, 2015
SEE: http://the-trumpet-online.com/breaking-gay-group-demands-christian-churches-shut/;
republished below in full unedited for informational, educational, and research purposes:

This is the only logical end for militant gay activism. Now a gay/LGBT group in Wyoming is demanding that the government shut down any church that has the temerity to believe that homosexuality is wrong.
Jeran Artery, the chairman of the gay group Wyoming Equality posted the stunning statement to his Facebook page… but like all liberals quickly removed it hoping that it would go down the Internet memory hole.
But the folks at Conservative Colorado got a screen shot of the post before Artery deleted it.

Today, in a stunning statement, Jeran Artery, Chairman of Wyoming Equality argued that churches who do not support same sex marriage should lose their tax exempt status.
“Churches that lobby to have freedoms and rights taken away from ANYONE should absolutely have their 501(c)3 status revoked!!”
Talk about tolerance, freedom of speech, and religious freedom. Disagree with Artery’s views of same sex marriage and your church will be shut down.
Gone are the days of pluralism. This is what tyranny looks like.
Well, let’s face it: With the hate that militant gays have whipped themselves up into, demanding that government shut down churches is a logical end argument.
http://rightwingnews.com/democrats/breaking-gay-group-demands-christian-churches-be-shut-down/
Wake-up, Pastors! Wake-up, Christians!
___________________________________________________________________