Exposing Jesuit Pope Francis
and the False Roman Church,
Actively Destroying True Christianity
& America From Within
Published on Nov 15, 2015
Not only does the Roman system conceal its own wickedness, it exalts the glory that the world gives to Pope Francis. That man that claims to be the Holy Father and Head of the Lord’s Church mocks our Lord and our Heavenly Father. The exposing of current documented facts about the Roman Church and its Pope, make this video valuable to protect people across the world for its perilous influence. Please make this video known to your friends and church members. And kindly let us know if you are speaking or writing to reveal the subtle guile of the system called the Roman Catholic Church. And as we pray for a display of the Lord God’s truth and grace, as this video is viewed, we praise Him. We also thank you for helping us make known this information to others.

Posted by John at 5:40 PM Links to this post

IT'S NOT ILLEGAL IMMIGRATION~IT'S AN INVASION~AND WE ARE UNDER ATTACK!

Alex Jones Interviews Steve Quayle:
We are Under Attack

Posted by John at 4:31 PM Links to this post

OBAMA LETS TERROR MIGRATE TO AMERICA, MOST OF ALL REPUBLICAN MAJORITY STATES & SMALL TOWNS FOR NOW

OBAMA LETS TERROR MIGRATE TO AMERICA, MOST OF ALL REPUBLICAN MAJORITY STATES
AND INTO SMALL TOWNS, NOT THE BIG CITIES;
KEEP QUIET, AND YOU'LL GET USED TO THE TYRANNY!
Published on Nov 17, 2015
In the wake of the terror in Paris. President Obama is blatantly disregarding the very real concerns of the American people. Rather than review the policy to bring in 10,000 Syrian refugees after the horror the world witnessed just 5 days ago. Obama, clutches like a madman to his power. And stays the course on the Bilderberg fueled globalist demand that he oust President Bashir Al Assad from Syria. Rather than do whatever it takes to protect the United States, Obama is leaving the gates wide open as he shuns the overwhelming concerns of Americans and aids an invading force to quietly enter the United States.

People are flooding social media to encourage Americans to call their congressional representatives to stop the resettlement of Middle Eastern migrants after government officials and contractors admitted the migrants cannot be tracked or vetted properly. The White House announced it was still accepting at least 10,000 migrants over the next year despite the Paris attacks.

Similar to what happened in France prior to the attacks in Paris. An armory in Massachusetts was mysteriously broken into on Saturday night, thieves made off with 16 guns, 6 rifles, and 10 pistols. Cartel gunmen pursued by Mexican Police walked right across the U.S. border and disappeared. While Isis calls for attacks on Washington D.C. and ramps up the possibility of terror on one of the many cities found on the ISIS kill list.
VIDEO:

MARXIST FROM INDIA INTENDS TO DAMAGE CAPITALISM IN AMERICA; THEN GO GLOBAL, JUST LIKE BERNIE SANDERS 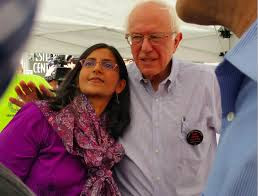 FROM: http://weknowwhatsup.blogspot.com/2015/10/sanders-socialist-alternative-and-green.html
ABOVE: They say a picture is worth a thousand words. Kshama Sawant, the leading member of  Socialist Alternative embraces Sanders the nominee for the Capitalist Democratic Party. On the other hand a scowling Sanders holds his hand up from Savant's shoulder. He does not want to be seen to be too enthusiastic about being too close to the socialist.
BUT: LEFT COAST IMPORT & NEW YORK JEWISH LIBERAL SOCIALIST
ARE CLOSE IN MANY WAYS,
BESIDES PRESSING THE FLESH
JUST OVERLOOK THE AGE DIFFERENCE 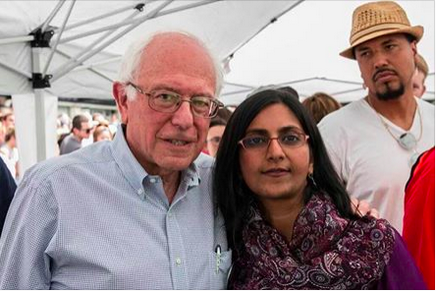 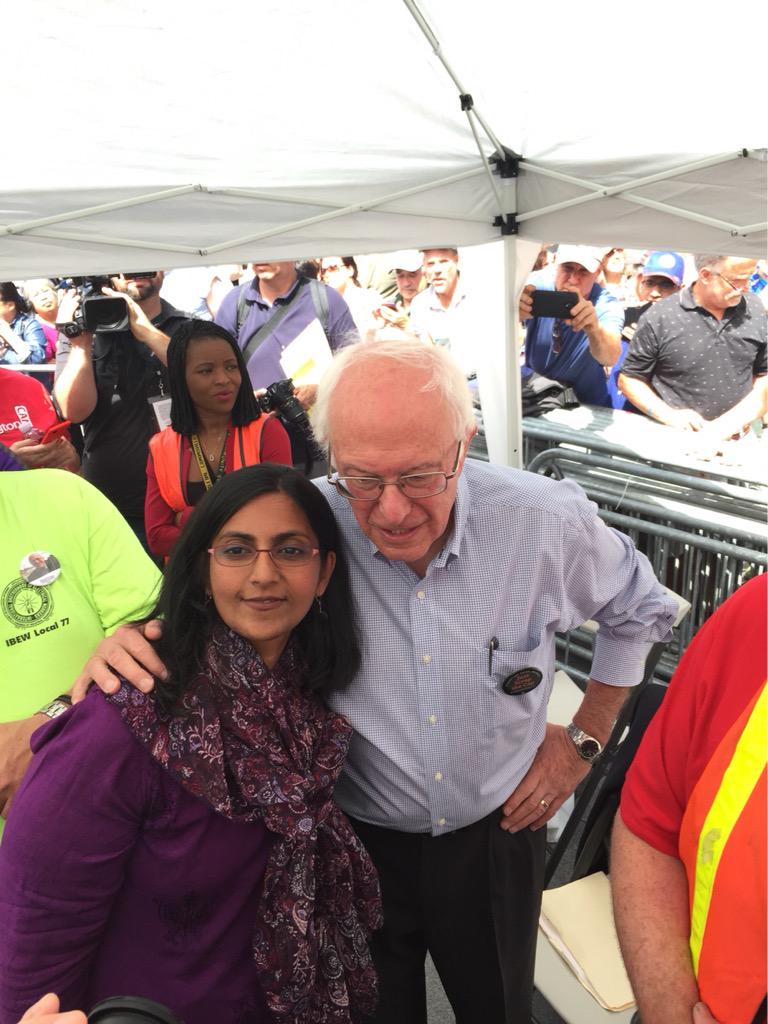 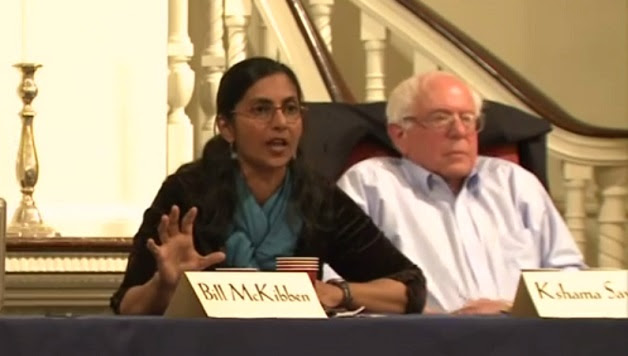 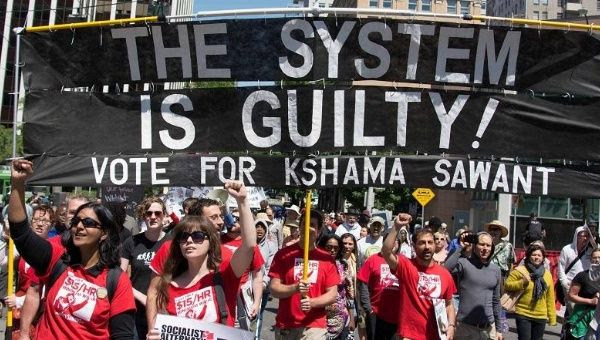 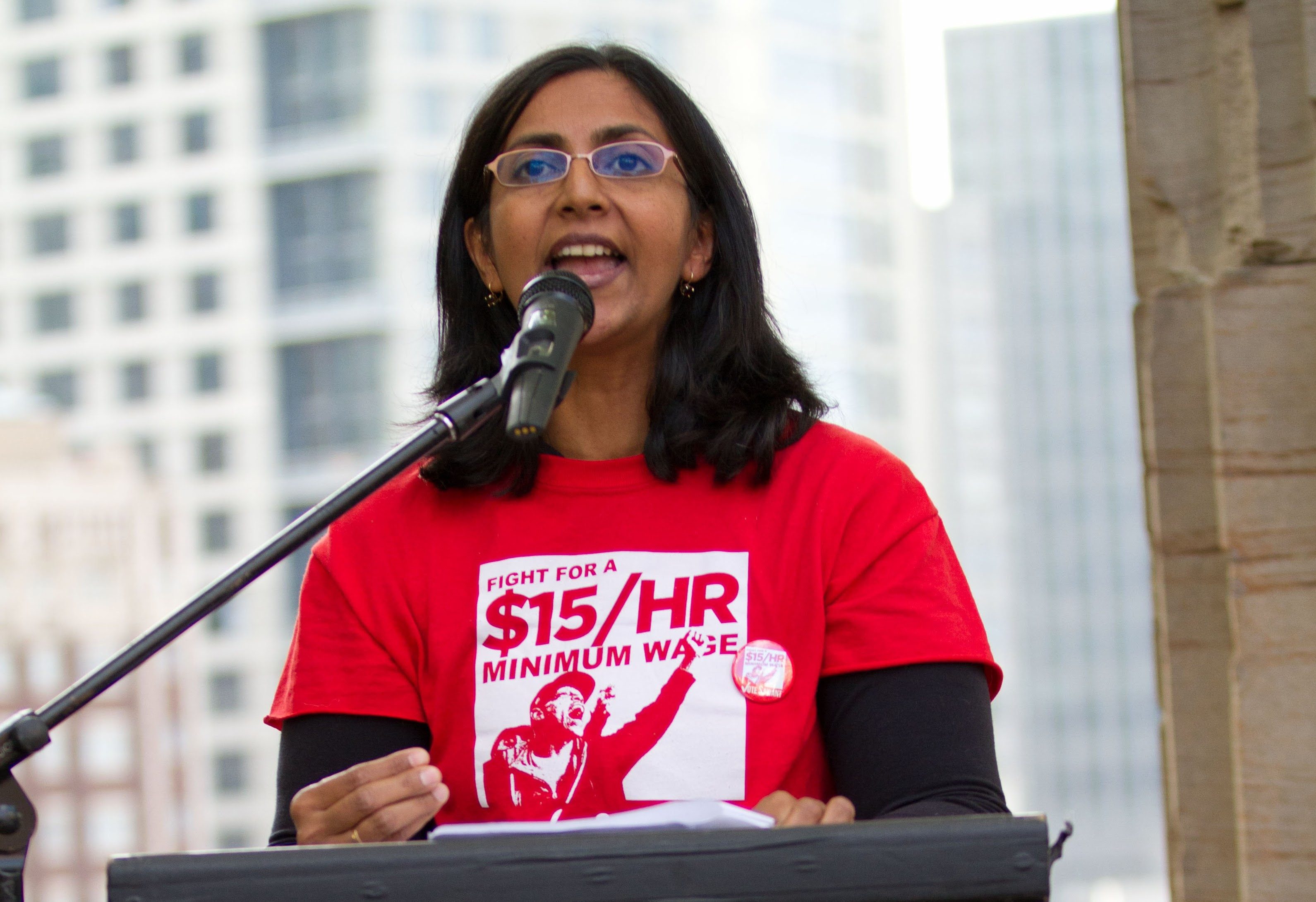 MAJORITY MOB RULE AGENDA
FROM WIKIPEDIA:
Kshama Sawant is a member of the Socialist Alternative party, the United States section of the British-based Trotskyist international organization the Committee for a Workers' International (CWI). She has referred to herself as a Marxist. Sawant has stated that she does not advocate for any system like the "bureaucratic dictatorship" of the former Soviet Union, but for democratic socialism meaning "the society being run democratically in the interest of all working people on the planet, all children - everybody who has needs, and all that being done in an environmentally sustainable manner."
The core issues of Sawant's campaign were a minimum wage increase to US$15/hour, a "millionaire's tax" or income tax on wealthy Seattleites, and rent control. Sawant said rent control is "something everyone supports, except real estate developers and people like Richard Conlin..." and compared the legal fight for its implementation to same-sex marriage, and the legalization of marijuana in the United States, both of which she supports. Her campaign for a $15 an hour minimum wage has been credited for bringing the issue into the mainstream and attracting support for the policy from both Seattle former Mayor Mike McGinn and Seattle current Mayor Ed Murray. In response to criticism that a $15 an hour minimum wage could hurt the economy, she said, "If making sure that workers get out of poverty would severely impact the economy, then maybe we don't need this economy." In her most recent campaign, Sawant called for large Seattle companies such as Starbucks and Amazon to be unionized. In previous campaigns, she has advocated the nationalization of large Washington State corporations such as Boeing, Microsoft, and Amazon.com and expressed a desire to see privately owned housing in "Millonaire's Row" in the Capitol Hill neighborhood turned into publically owned shared housing saying, "When things are exquisitely beautiful and rare, they shouldn't be privately owned." During an election victory rally for her City Council campaign, Sawant criticized Boeing for saying it would move jobs out of state if it couldn't get wage concessions and tax breaks. She called this "economic terrorism" and said in several speeches that if Boeing moved jobs out of state, the workers should take over Boeing facilities and bring them into public ownership. She has said they could be converted into multiple uses, such as production for mass transit. Sawant also supportssingle-payer health care. Sawant maintains that a socialist economy cannot exist in a single country and must be a global system just as capitalism today is a global system.

The Spread of Socialism in Seattle

BY CLINTON ALEXANDER
SEE: http://www.thenewamerican.com/usnews/politics/item/21962-the-spread-of-socialism-in-seattle; republished below in full unedited
for informational, educational, and research purposes:

"Capitalists are criminals of our society",
Kshama Sawant
Published on Nov 14, 2013
Seattle city councilwoman Kshama Sawant goes on anti capitalist rant at a Trayvon Martin rally, July 20th, 2013. "The Capitalist system itself...Is at the root of racism, hatred, and fear of black people, people of color, of poor people" "We need to...put on trial capitalism itself"

BY CLINTON ALEXANDER
SEE: http://www.thenewamerican.com/economy/economics/item/21844-seattles-coming-15-minimum-wage; republished below in full
unedited for informational, educational, and research purposes:

"YOU AND I ARE CATHOLICS; AND OUR CATHOLIC VALUES DO NOT ALLOW US TO CREATE A PERMANENT UNDERCLASS"
(ALSO KNOWN AS: CATHOLIC SOCIALIST REDISTRIBUTION OF WEALTH)

PAUL RYAN JUST AS MUCH TREASONOUS
AS BOEHNER WAS

FROM WIKIPEDIA: https://en.wikipedia.org/wiki/Paul_Ryan
"In April 2012, after receiving criticism from Georgetown University faculty members on his budget plan, Ryan rejected Rand's philosophy as an atheistic one, saying it "reduces human interactions down to mere contracts". He also called the reports of his adherence to Rand's views an "urban legend" and stated that he was deeply influenced by his Roman Catholic faith and by Thomas Aquinas. Yaron Brook, executive director of the Ayn Rand Institute, maintains that Ryan is not a Rand disciple, and that some of his proposals do not follow Rand's philosophy of limited government; Brook refers to Ryan as a "fiscal moderate". A Catholic, Ryan is a member of St. John Vianney Catholic Church in Janesville, and was an altar boy."
RYAN'S GUILT BY ASSOCIATION WITH
GUTIERREZ: El Gallito –
the little fighting rooster-
FROM SMILES TO VICIOUSNESS
IN A HEART BEAT 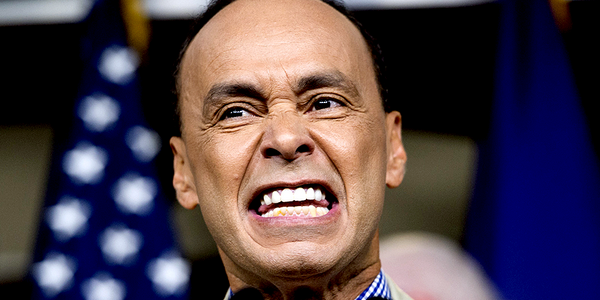 PUERTO RICAN CATHOLIC HISPANIC SOCIALIST & ACTIVIST WITH HISTORY OF CIVIL DISOBEDIENCE & POLITICAL BRAWLING
FROM WIKIPEDIA: https://en.wikipedia.org/wiki/Luis_Guti%C3%A9rrez
Of Puerto Rican descent, he is a supporter of Puerto Rican independence, and the Vieques movement. In the late 1990s and the 2000s, he was a leader in the Vieques movement, which sought to stop the United States military from using the inhabited island as a bomb testing ground. In May 2000, Gutiérrez was one of nearly two hundred people arrested for refusing to leave the natural habitat the US military wished to continue using as a bombing range. (SEE: https://www.youtube.com/watch?v=BobRKQ8ZXtM). Gutiérrez is also an outspoken advocate of workers' rights, LGBT rights, gender equality, and other liberal and progressive causes. As a member of the Chicago city council, Gutiérrez was a key backer of the 1986 gay rights ordinance. Gutiérrez has been called the "undisputed champion of immigration reform" and "Moses of the Latinos" due to his many years advocating for immigrant rights. In his continued efforts to reform immigration, Gutiérrez has participated in two acts of non-violent civil disobedience outside of the White House. The first took place on May 1, 2010, where, following a speech delivered to hundreds at Lafayette Park, Gutiérrez marched with protesters to the White House and refused to leave until Presidential action was taken on immigration reform or he was arrested. Many of the protesters who joined Gutiérrez had signs that called for a Presidential moratorium on deportation and criticized recent anti-immigrant legislation passed in Arizona – SB 1070. Gutiérrez also joined the protesters in criticizing Arizona Governor Jan Brewer's decision to sign the measure allowing racial profiling in the state-level enforcement of immigration laws.
On July 26, 2011, in response to a record-breaking one-million deportations under President Obama, and the President's continued refusal to stop deportations of DREAM Act eligible youth, Gutiérrez and eleven labor, faith, and civil rights leaders were arrested outside the White House. A crowd of 2,500 came to support Gutiérrez and the eleven other leaders. A day before the arrest, President Obama sent a letter to Gutiérrez in which he stated that he would continue his administration's deportation policy.
In 2009 and again in 2011, Gutiérrez went on a nationwide tour in support of comprehensive immigration reform and a moratorium on the deportation of families. The tours have received widespread media attention and helped revive the nationwide discussion on immigration reform. Gutiérrez was the main speaker at the historic March 21, 2010, March for America rally at the capitol mall attended by over 200,000 people.
Gutiérrez was the first elected official to sponsor a version of the DREAM Act – legislation to allow undocumented youth brought to the United States as minors a pathway to citizenship – in 2001. In 2009 Gutiérrez introduced CIR-ASAP – Comprehensive Immigration Reform for America's Security and Prosperity Act. With a background as a community activist and organizer Gutiérrez often uses non-violent civil disobedience when pushing political causes and legislation.
PAPAL PUPPETS

U.S. to Open Facilities in Middle East to Speed Up Processing of Syrian Refugees

Americans are starting to melt down phone lines in Washington, D.C., as backlash explodes against President Obama’s migrant resettlement program.

People are flooding social media to encourage Americans to call their congressional representatives to stop the resettlement of Middle Eastern migrants after government officials and contractors admitted the migrants cannot be tracked or vetted properly.
“Call your congressperson now and demand defunding Obama’s Syrian refugee plan,” one tweet of many states.
The White House announced it was still accepting at least 10,000 migrants over the next year despite the Paris attacks.
Posted by John at 10:08 AM Links to this post