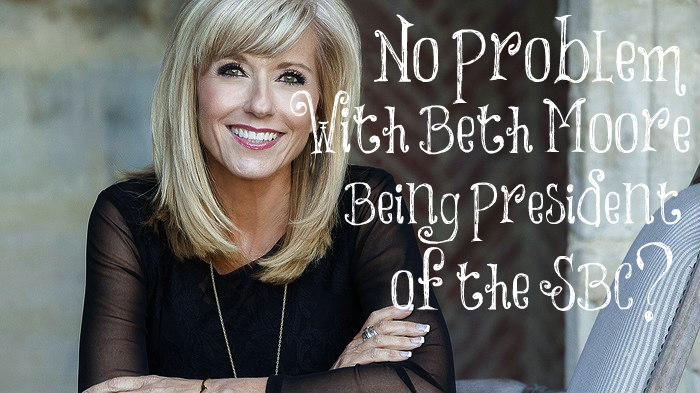 When Southern Baptists get together for their annual meeting June 12 in Dallas, J.D. Greear and Ken Hemphill are on the ballot to become the denomination’s next president. But now a third name is being floated—Beth Moore. Dwight McKissic, pastor of Cornerstone Baptist Church in Arlington, Texas, suggested on Saturday that electing a woman to the presidency would send a well-needed message to Southern Baptist women. (SEE: https://churchleaders.com/news/326893-could-beth-moore-heal-the-sbc-as-president.html)

SBC LEADERS FLOAT IDEA OF BETH MOORE AS NEXT DENOMINATION PRESIDENT
SEE: http://pulpitandpen.org/2018/06/05/sbc-leaders-float-idea-of-beth-moore-as-next-denomination-president/; republished below in full unedited for informational, educational and research purposes:
Beth Moore, who is best known as Lifeway’s Cash Cow of Bashan, the extremely popular women’s teacher whose increasingly wild-eyed prophetic visions have gained prominence in a wide berth of evangelicalism well outside the SBC (especially in charismatic circles, as she coalesces with other egalitarian prophetesses like Anne Voskamp, Joyce Meyer, and Christine Caine), may very well be promoted as the next president of the SBC after the upcoming term of JD Greear.

Beth Moore – Lifeway’s Cashcow of Bashan
Greear, who is seen as the favorite for the 2018 SBC election, holds to a modified Complementarian position that is, for all intents and purposes, Egalitarian. Also a Continuationist and a #woke Social Justice Warrior, the megachurch satellite campus pastor is well departed from Southern Baptist historic orthodoxy on a number of points. This will unlikely stop the young, popular and charismatic mega-pastor for winning the June election handily, as the SBC reels in shock from the firing of perhaps the oldest and most prominent standard-bearer of SBC conservativism, Paige Patterson, in a cultural bleed-over of the #metoo movement into the denomination in what is an increasingly speculative and questionable decision of the Southwestern Baptist Theological Seminary Executive Board. Greear has presented himself as a fully “woke” and politically savvy public relations specialist, who along with certain other leaders in the SBC (like Russell Moore, Albert Mohler, Danny Akin, Matt Chandler and other New Calvinists), are intent on rebranding the denomination in the name of saving it. One such overture to “saving the denomination” in recent days has been talk of electing a female president, which has received no shortage of support in social media. The name for such a female leader of the country’s largest Protestant denomination that has risen to the top of discussion is none other than the recently woke prophetess, Beth Moore.
Following on the heels of a conference that should have been seen as spitting in the face of the #MeToo Movement, MLK50 – a conference venerating a man who literally trafficked in female prostitutes – many SBC leaders began to vocalize the need for leadership chosen not by the content of their character, but the color of their skin. In true Marxist Intersectionality fashion, these same leaders started to include women in the long list of underrepresented minorities who had to be placed at the top tiers of leadership if the SBC was to survive the impending tide of cultural opinion. JD Greear, on May 25, posted a video in which he called on the SBC to place women at the highest levels of leadership. He stated:

Our failure to listen to and honor women and racial minorities and our failure to include them in proportionate measures at top leadership roles have hindered our ability to see sin and injustice and call it out.

The politically correct virtue signaling of Greear did not go unnoticed. Soon, names began to surface of women who could take the top leadership spot in the SBC. In the last several days, one name, in particular, seemed to echo throughout social media. That name is Beth Moore.

Dwight Marxissic
Dwight McKissic – or Marxissic, as he is known among the discernment community – is the African American race-baiting pastor who supported Hillary Clinton and leftist-progressives, and who most notably designed a resolution at the 2017 SBC meeting to condemn the so-called “alt-right,” simultaneously orchestrating mainstream media outrage at SBC messengers who originally balked at the politically motivated propaganda. SBC leaders, eager to avoid any negative media attention, scrambled to pass an amended form of the resolution, pleading with messengers to consider how it would look in the press. Currently, Marxissic is planning a resolution with Southeastern Baptist Theological Seminary President, Danny Akin, which will yet again focus on racial reconciliation. Akin, who founded an Affirmative Action department at SEBTS called “The Department of Kingdom Diversity” and hosted a “Malcolm X Read-In” for seminary students this year, has joined Marxissic to denounce “White racism” and demand social justice, which eerily seems like something out of the 1970s United Methodist playbook or that of any of the mainstream liberal denominations that have experienced severe, anti-Gospel mission drift in the latter 20th Century. It was McKissic himself who similarly floated the idea of nominating Moore as president of the SBC.
McKissic wrote:

If I thought Beth Moore would accept the nomination or be agreeable to being nominated, because of her qualifications and the current context the SBC finds herself in…I would nominate her for SBC President.

Of course, the SBC has never considered a female president of the SBC because it has always fallen to the role of pastor, and eldership is limited to male leaders. The position also requires a good deal of preaching, which has always been seen by the denomination as a job for men, in light of the prohibition against women teaching in the church. With the promotion of so many female preachers by SBC’s retailer, Lifeway, one could have guessed it would only have been a matter of time before the Convention as a whole would see little problem with that gross and profane departure from orthodoxy.
McKissic went on to explain his reasoning:

The SBC is a parachurch organization—not a church. Therefore, there is absolutely not one Bible verse, or SBC constitutional bylaws prohibitions, nor any BF&M 2000 prohibitions against a woman serving as SBC President. Tradition, sexism, fear and other non-biblical factors would probably prevent any woman, including Deborah, Mary the Mother of Jesus, Lydia, Junia or Priscilla, or Lottie Moon from being elected President of the SBC; but, I repeat…there is not one Bible verse or SBC constitutional prohibition.
Therefore, I could vote for a qualified woman with a clear conscience for President of the SBC. The I Timothy 2:12 passage is reference to local church leadership, not parachurch leadership. The statement on gender roles in the BF&M 2000 does not prohibit female leadership in the SBC Convention or entity life. To impose I Timothy 2:12 as a prohibition on a female SBC President would be tantamount to imposing Genesis 9:25-27, as a prohibition for a Black, Asian, or Hispanic SBC President. Neither Scripture is addressing prohibitions in parachurch offices. Historically, though, they have been used or misused to draw such erroneous conclusions.

The problem with Marxissic’s theory, other than his use of Deborah – an Old Testament political judge who served as God’s judgment upon a leadership-weak nation – and New Testament Saints (who were NOT appointed to spiritual ecclesiastical authority, even by the Lord Himself), thus demonstrating massive hermeneutical failure and tragic inability to reason, is that the issue of Complementarianism vs Egalitarianism is one of ecclesiastical authority and not one only of eldership within the local church.
There is another problem with Marxissic’s theory; the SBC, although not a local church, is ecclesiastical. How do we know this? The SBC – officially, legally, and on-the-record – calls itself an ecclesiastical authority.
For example, just this year the SBC’s North American Mission Board (NAMB) argued in court that a lawsuit against it should not proceed because of a “ministerial exemption” due to the “ecclesiastical abstention doctrine” (source link). In other words, the SBC entity claimed to be ecclesiastical. Regarding the lawsuit of Will McRaney, NAMB attorneys argued according to the Baptist Message:

On the matter of the “ecclesiastical abstention doctrine” (which prevents a court from interfering in decidedly church issues such as theology), [the judge] affirmed the U.S. Supreme Court position that churches have the “power to decide for themselves, free from state interference, matters of church government as well as those of faith and doctrine.” However, regarding NAMB’s claim that “adjudicating McRaney’s defamation claim would require the Court to decide matters of internal church governance,” he said he “disagrees.”

Furthermore, all local SBC churches needing proof of tax exemption as a religious institution fall under the “umbrella 501(c)3” of the Southern Baptist Convention, meaning that the only recognition many churches have with the federal government as a house of worship is their legal identity with the SBC, which is recognized as a “church.” Baptist autonomy aside (and the attitude of Greear and McKissic seem to be “to hell with Baptist polity” anyway), like it or not, the SBC is ecclesiastical.
On top of these inconvenient truths, the fact is the presidency of the SBC is, in nature, pastoral. These are men who – like all SBC entity heads – make doctrinal decisions (like IMB President, David Platt, approving tongue-speakers to serve as missionaries or former SBC President, Ronnie Floyd, deciding to partner in prayer with IHOP). The office itself is one of the highest authority, and one prohibited to women. Welcome to complementarianism.
Many of the SBC blogger-class seconded the notion of McKissic that the office should not be limited to men, and that Beth Moore would be a suitable candidate for the position, including bloggers at SBC Voices, Dave Miller, Brent Hobbs, and AlanCross.
________________________________________________________________

Same-Sex Attraction and the Continued Collapse of American Evangelical Christianity 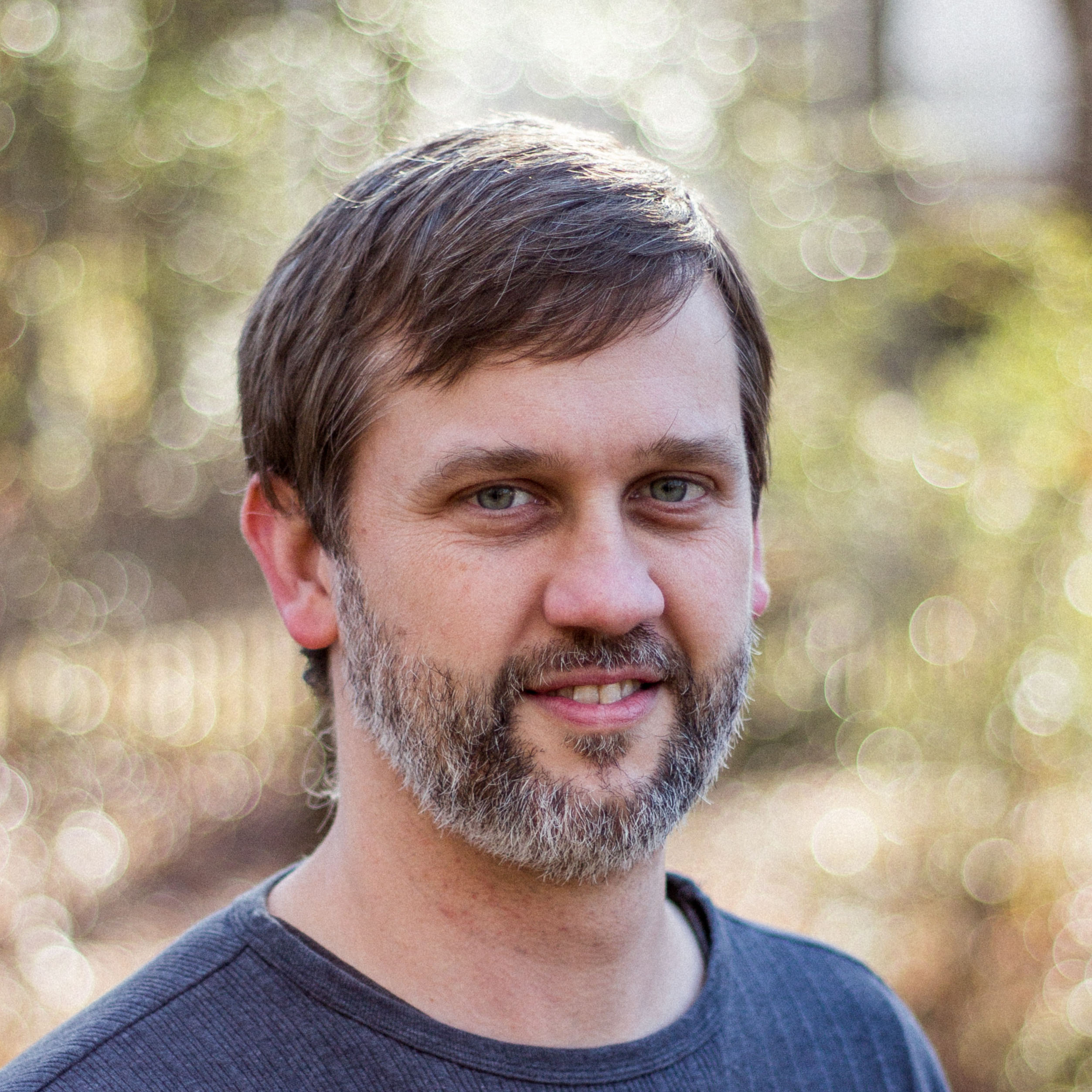 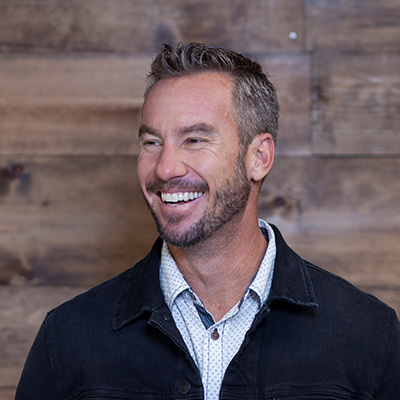