LGBT: THOSE THAT BEND THE KNEE & THOSE WHO DON'T~NATURAL LAWS OF GOD NOT SUBJECT TO MAN

Daniel 3:14-18-"Nebuchadnezzar responded and said to them, "Is it true, Shadrach, Meshach and Abed-nego, that you do not serve my gods or worship the golden image that I have set up? "Now if you are ready, at the moment you hear the sound of the horn, flute, lyre, trigon, psaltery and bagpipe and all kinds of music, to fall down and worship the image that I have made, very well. But if you do not worship, you will immediately be cast into the midst of a furnace of blazing fire; and what god is there who can deliver you out of my hands?" Shadrach, Meshach and Abed-nego replied to the king, "O Nebuchadnezzar, we do not need to give you an answer concerning this matter. "If it be so, our God whom we serve is able to deliver us from the furnace of blazing fire; and He will deliver us out of your hand, O king. "But even if He does not, let it be known to you, O king, that we are not going to serve your gods or worship the golden image that you have set up."

“Our Rights Do Not Come From God”

SEE: http://www.thenewamerican.com/usnews/item/20119-liberal-anchor-our-rights-do-not-come-from-god; republished below in full unedited for informational, educational, and research purposes: 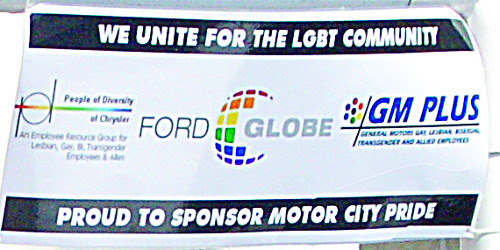 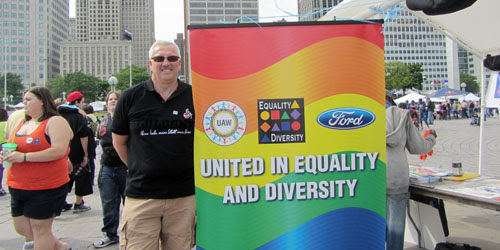 Ford Contractor Says He Was Fired

for Speaking Against Company’s

DEARBORN, Mich. – A former contractor for Ford Motor Company has filed a religious discrimination complaint, alleging that he was fired for speaking against the company’s support of homosexuality.
Thomas Banks has worked as a design and release engineer for Ford since 2011—that is until last August when he was fired on an accusation that he had violated the company’s “anti-harassment” policy for responding to an email employee newsletter from the company. The newsletter contained an article regarding the 20th anniversary of Ford’s Gay, Lesbian Or Bisexual Employees advocacy group (GLOBE).
Banks replied with a comment to express disagreement.
“Endorsing and promoting sodomy is of benefit to no one,” he wrote. “This topic is disruptive to the workplace and is an assault on Christians and morality, as well as antithetical to our design and our survival. Immoral sexual conduct should not be a topic for an automotive manufacturer to endorse or promote.”
“Heterosexual behavior creates life—homosexual behavior leads to death,” Banks continued.
But after submitting the comment, the contractor received an email from a human relations representative, requesting a meeting to “discuss something that was brought to my attention.” When Banks met with the individual, he was informed that he might have violated the company’s anti-harassment policy because of the comment he submitted.
He later received a voicemail informing him that he had been fired.

“I was stunned to realize that I was fired over expressing my faith in a single comment,” Banks said in a statement. “It felt like Ford was saying, ‘Even if you are respectful, your faith, and you as a Christian, are unwelcome at Ford.’”
Ford has also released a statement on the matter, but hasn’t commented on the specific complaint.
“[W]e believe this matter ultimately is between the individual and their agency employer,” it wrote. “Ford’s anti-harassment policy was created to foster a respectful, inclusive work environment for all, and we expect employees and agency personnel to act in accordance with this policy.”
With the assistance of the Liberty Institute in Texas, which provides legal services free for clients, Banks filed a complaint last month with the Equal Employment Opportunity Commission, contending that Ford had violated Title VII of the federal Civil Rights Act and the Civil Rights Act of 1991.
“If you read harassment to mean disagreement—which is what a lot of companies and people are increasingly starting to do—they’re saying, ‘If you disagree, you must hate,'” attorney Steve Cloty told reporters. “If we do that, there’s no freedom at all. We’re not diverse, we’re not tolerant, we’re not inclusive. We’ve just said, ‘Nobody can disagree,’ which is a scary thought.”
“We are shocked that Ford Motor Company would terminate one of their employees simply because he expressed his faith,” added Hiram Sasser, Liberty Institute Director of Litigation. “If Ford is allowed to get away with firing Mr. Banks over this comment, we fear that every person of faith will be punished for talking about his or her faith in the workplace. At Ford, if you speak about your faith as it relates to the company, even to the company, you may be terminated.”
___________________________________________________________


OBAMA'S BOWING TO TERRORISM AGAIN;
OUR MILITARY PAYS THE PRICE

Marines ordered to destroy weapons while fleeing US

embassy in Yemen; Obama broadcasts everything he’s not going to do against ISIS

THE NEW JERSEY POLICE STATE WILL REQUIRE SCHOOLCHILDREN TO OBEY POLICE WITHOUT PROTECTING THEIR CONSTITUTIONAL RIGHTS
SEE: http://www.nj.com/politics/index.ssf/2015/02/cop_class_nj_students_would_learn_how_to_interact.html#incart_river;
Republished below in full unedited for informational, educational, and research purposes:

Matt Friedman | NJ Advance Media for NJ.com By Matt Friedman | NJ Advance Media for NJ.com Email the author | Follow on Twitter on February 10, 2015 at 8:30 AM, updated February 10, 2015 at 10:46 AM
TRENTON — New Jersey schools would be required to teach students how they should interact with police officers under proposed legislation a sponsor says could protect both kids and cops.
The bill, (A4130), introduced last week, would require school districts to come up with instructions for students as part of their Social Studies Core Curriculum Content Standards that would include "the role and responsibilities of a law enforcement official in providing for public safety" and "an individual's responsibilities to comply with a directive from a law enforcement official."
One of the sponsors, state Assemblyman Ralph Caputo (D-Essex), said the bill was inspired partly by recent incidents of police shootings around the country, including the death of Michael Brown in Ferugson, Mo.
"Kids have to learn how to behave when they're being investigated or talked to, because they could put themselves in jeopardy," Caputo said. "It's also a good effort to protect the police. Kids have to recognize their authority when they're being questioned and how to conduct themselves."
Caputo said the legislation takes no sides as to who was right and wrong in the incidents. It just seeks to stop altercations before they start.
"When a kid jumps out of a car, he may appear to be threatening but he's not - he just may not understand what those protocols are," Caputo said.
In New York City, a high school principal brought New York Civil Liberties Union representatives into the classroom to coach kids on what to do. The group instructed students to be polite and keep their hands visible, according to reports, as well as on their constitutional rights. And school officials in Linwood, in south Jersey, told the Press of Atlantic City last month that they were considering how to teach students safe interaction with police.
Assemblywoman Grace Spencer (D-Essex), a co-sponsor, said that the teaching could "break down any misconceptions that children might have from either misinformation or just the wrong portrayal of police officers through media."
Spencer is a municipal prosecutor in Newark and has a brother on the city's police force, as well as another who is a retired from the force.
"Not every police officer is bad. Not every police officer is necessarily good. However, there are certain things that you should and should not do when you encounter the police that will not cause a situation to escalate into something that could become dangerous for either person involved," she said.
Although the legislation leaves it up to the district to come up with the curriculum, which would be taught from elementary through high school, it should be characterized by "mutual cooperation and respect."
Pat Colligan, president of the New Jersey State Policemen's Benevolent Association, said he agrees with the idea behind the bill, though he would like to know more about how it would be implemented.
"I kind of wish they'd have reached out to us in the beginning," Colligan said. "I think any dialogue is positive dialogue. I'd be all for it as long as it's a well-rounded class and people understand some of the limitations that we have when we're dealing with a deadly force situation ... It's usually time. People seem to think we have this 10 minute period to think out what we're going to do when you're given that short amount of time and short distance."
Ari Rosmarin, public policy director for the New Jersey ACLU, said the legislation is missing a critical component.
"The bill calls for education on young peoples' roles and responsibilities, but it's missing the third R: rights. The classroom is the appropriate place for a know-your-rights education," Rosmarin said. "Recent events make a strong case for New Jersey's young people being made aware of their rights and how to protect them when interacting with the police."
Rosmarin said his group hopes to work with the sponsor to include those provisions, and that "we hope to see officers receive equally robust training about interacting with young people in New Jersey's community."
The chief sponsor of the bill, Sheila Oliver (D-Essex), did not respond to requests for comment. The measure has nine sponsors in total, seven from Essex County and two from Passaic County.