Posted by John at 5:18 PM Links to this post

Email ThisBlogThis!Share to TwitterShare to FacebookShare to Pinterest
Labels: Advertising

And from the Times of Israel, their own glorification of sin:
http://www.youtube.com/watch?v=1_FYpQfQ38g. 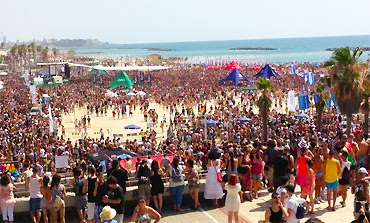 There were reports of 100,000 people in attendance at the 20th gay pride parade/festival in Tel Aviv, Israel.
Obama sent his well wishes to them all. Christians would do well to re-think their fascination with the Hebraic Roots/Messianic movement being spread by Jewish missionary organizations within the U.S. and around the world. How can a country which gives support to the gay agenda have any moral authority in the Christian world or anyplace else?
US Ambassador to Israel Dan Shapiro conveyed warm wishes from President Barack Obama, Secretary of State John Kerry and the American people. Mayor Ron Huldai on the left, ambassador Shapiro on the right:

See story and photo slideshow in The Times of Israel article: http://www.timesofisrael.com/tel-aviv-gears-up-for-annual-gay-pride-festival/.