VIKTOR ORBAN: "STAND UP & FIGHT-AWAKEN YOUR NATION"~HUNGARIAN PM TO FLEMISH YOUTH PATRIOTS
BY DAN LYMAN
SEE: https://europe.infowars.com/stand-up-and-fight-awaken-your-nation-hungary-pm-to-flemish-youth-patriots/; republished below in full unedited for informational, educational and research purposes:
Hungarian Prime Minister Viktor Orbán offered urgent advice about the future of Belgium to a visiting delegation of Flemish youth patriots, telling them to "awaken" their nation before it's too late.
During a conversation with members of Schild & Vrienden, a prominent group for young Flemish activists in Belgium, PM Orbán encouraged them to "stand up and fight" for their rapidly disappearing culture.


"What would you say to the Belgians who think that they cannot change this massive immigration, this cultural decline in the West, while you with Fidesz [Orban's party] in Hungary, in Central Europe, have shown that change is possible if you are brave enough?" Dries Van Langenhove, head of Schild & Vrienden, asked Orbán.
"May I be direct and honest?" Orbán prefaced. "Awaken. Awaken as soon as possible - otherwise, you will be in trouble."
"Tendencies which are going on are not just unpleasant, not just inconvenient, but changing dramatically, the basis of our civilization. So if you are not awakened in the proper time, Belgium will be different in five or 10 years time. It's about your future."
Orbán clarified that he was merely offering his own opinion to the young men, insisting upon his respect for their "national sovereignty," but added, "It's your future; it's in your hands. Do something. Stand up and fight."
View image on Twitter 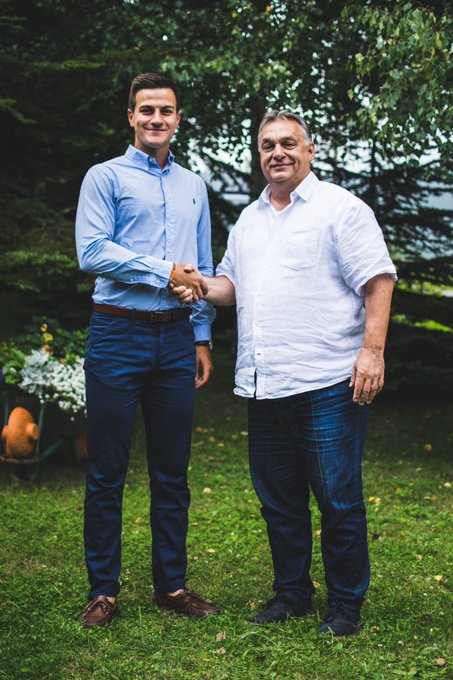 Dries Van Langenhove@DVanLangenhove
A great honour to be invited by Viktor Orbán, the man who bravely stood against communism back in the day and bravely stands against the EU bureaucrats today. Hungary for the Hungarians. Flanders for the Flemish. Europe for the Europeans. United we stand.

Twitter Ads info and privacy
Schild & Vrienden - which translates roughly to "Shield & Friends" - recently made waves across the populist-nationalist sphere when they challenged radical left-wing activists who attempted to 'occupy' ancient Gravesteen Castle to propagandize on behalf of open borders and mass migration.
Compelling video footage of the confrontation went viral across social media, elevating the group's profile and thrusting them into the international spotlight.


(PHOTO: Siebe Van Gaever)
Posted by John at 4:52 PM Links to this post