A SLIGHT CHANGE TO A MUCH MORE PROGRESSIVE & DEVIANT PARADE
UNSUITABLE FOR CHRISTIANS &
THEIR CHILDREN
"Husbands-to-be Danny Leclair (l.) and Aubrey Loots in the office of one of their hair salons. They say they could never have imagined getting married on a float in the Tournament of Roses parade, but hope spectators will see how their relationship is no different than other people's." FROM:
http://www.scpr.org/news/2013/12/18/41046/l-a-gay-couple-to-marry-on-rose-parade-s-world-sta/?slide=1: 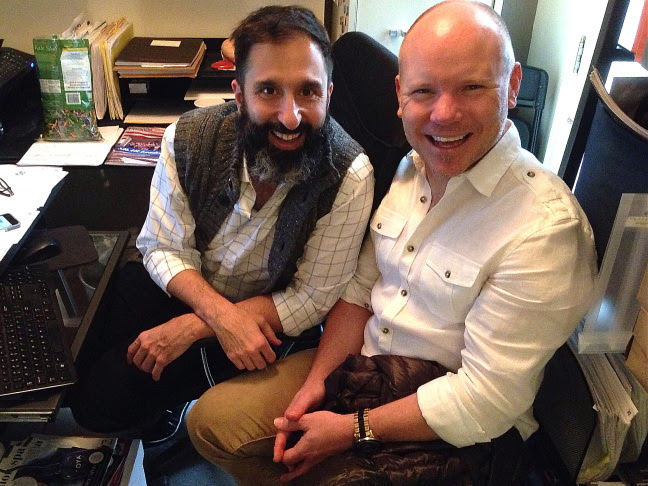 
ROSE PARADE'S HOMOSEXUAL
"WEDDING" FLOAT
CORRUPTS CHILDREN-
AFTAH'S SEVEN LESSONS
FOR CHRISTIANS:
SEE: http://americansfortruth.com/2013/12/30/rose-parades-homosexual-wedding-float-corrupts-children-seven-lessons-for-christians/, reprinted in full below for educational, informational, and research purposes:
Americans For Truth Press Release
Contact: Peter LaBarbera: 312-324-3787;americansfortruth@gmail.com; on Twitter@PeterLaBarbera
TAKE ACTION: to contact Tournament of Roses organizers about celebrating homosexual perversion in the storied parade watched by countless children, call (626)449-4100 or go HERE.
Read this release on Christian Newswire HERE
______________________________
CHICAGO – Americans For Truth About Homosexuality (AFTAH) President Peter LaBarbera offers the following seven lessons from the first-ever homosexual “wedding” float at the annual Rose Parade in Pasadena on New Year’s Day — another tragic marker of America’s moral decline.
______________________________________
Educate Your Church and Social Network
Peter LaBarbera (on Twitter @PeterLaBarbera) has more than two decades experience fighting and exposing the powerful, well-funded homosexual lobby. He is available as a speaker on a number of topics surrounding the “gay/transgender” agenda and the promotion of biblical sexual morality, such as:
Write americansfortruth@gmail.com or call AFTAH at 312-324-3787 to book LaBarbera at your church or group event.
____________________________________________________________________
SEE ALSO: http://www.thenewamerican.com/culture/faith-and-morals/item/17250-same-sex-couple-to-wed-on-rose-parade-float;
EXCERPT:
"two gay men “will take their vows before the nearly 500,000 people who will line Colorado Boulevard on January 1 and millions of television viewers watching around the globe.”
The publicity stunt comes on the heels of the Supreme Court's June ruling that made same-sex “marriage” legal in California, and the two homosexual men are excited about “standing on the shoulders of thousands of men and women who came before us in this fight for marriage equality,” Leclair told the Pasadena paper. “We’re excited to be part of that story, to be able to do this because of them. We’re looking forward to honor that.”"

SEE ALSO:
http://christiannews.net/2013/12/28/live-same-sex-wedding-to-be-part-of-new-years-tournament-of-roses-parade/
EXCERPTS:
"However, some have characterized the float as propaganda and state that it is indicative of the continued moral downfall of the nation.
“This float is symbolic of proud homosexual sin on parade for the whole nation to see,” Peter LaBarbera of Americans for Truth About Homosexuality (AFTAH) told Christian News Network. “This is what America has become.”
LaBarbera said that he believes the float is part of the agenda to desensitize the nation to the homosexual lifestyle, and to work toward acceptance and legitimization."
“God is not mocked,” LaBarbera warned. “The more we celebrate sin, the more we are in danger of [further] declining in this society, because any society that leaves God behind and abandons the natural family and wholesome morality is a society headed for the dustbin of history. And that’s where America is headed, unfortunately.”

on top of Float at Rose Bowl Parade:

over plans for live gay wedding:

"The two gay beaus will not be alone as they preen for gawking observers along the Rose Parade route. “Sharon Raphael and Mina Meyer, a lesbian couple together for 42 years, will also join Leclair and Loots on the float,” "
SEE NEW AMERICAN ARTICLE ABOVE

Posted by John at 9:35 AM Links to this post

IS YOUR CHURCH INTO THE "JUDGE NOT" LIE & REPUDIATION OF SEPARATION?

The "Judge NOT!" Lie

The Intentional Destruction of

Published on Jan 30, 2013 on ChristianVoice08 YouTube channel:
You can't judge me, you're a Christian! What a lie from the lowest pit of hell.
So, why do you buy into it??? Because so many teachers and preachers are telling and supporting that lie! What does the Bible really say about judging? You may be surprised. Taken in context Matthew 7 does not contradict any commandment of Christ. And, since it is a commandment of Christ to judge, Christians are to judge or they are not Christians. Any who teach against this are liars or deceived.

Rick Warren is a Fraud :

Review of Church on the Rise

Published on Dec 26, 2013 on ChristianVoice08 YouTube channel:
What is Biblical Separation? Christians are to be SPIRIT LED not Purpose Driven. We are not worker bees serving the collective! Hear why a loss of the doctrine of Biblical Separation has led to a mass false movement that claims to be Christian but is tied to the occult instead.

Beware of the Church Growth Movement

Published on Dec 27, 2013 on YouTube channel of proclaimingthe gospel.org:
More and more pastors are discarding our Lord's blueprint for building His Church and exchanging it for a seeker-sensitive approach in order to attract a larger following. In this week's broadcast, Mike Gendron interviews his pastor Jesse Barrington on the dangers of the church growth movement and easy-believism. Mike and Jesse discuss why pastors fall into this unbiblical movement and what people should do if they find themselves in a seeker friendly church.