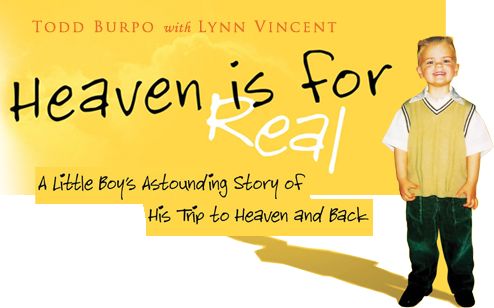 SEE: http://www.wayoflife.org/database/friday_church_news/15_17.php
HEAVEN IS FOR REAL:
DANGEROUS MOVIE FOR AN APOSTATE AGE
(Friday Church News Notes, April 25, 2014, www.wayoflife.orgfbns@wayoflife.org, 866-295-4143) - Heaven Is For Real, the account of a four-year-old boy’s supposed visit to heaven, has sold over 2 million copies in book format and has been turned into a movie which grossed $21.5 million when it opened on Easter weekend. One pastor told me that the book is “circulating around many of our Independent Baptist camps; many are recommending it.” It is about Colton Burpo, a Methodist pastor’s son who allegedly visits heaven during emergency surgery. There he meets a dead sister and great grandfather, sees Jesus, God the Father, the Holy Spirit, and Satan, and learns things not revealed in Scripture. We don’t doubt that the little boy is convinced that he visited heaven, but we don’t believe for a minute that it actually happened. First, the apostle Paul said that when he had visited heaven, he heard things that he was not allowed to repeat (2 Cor. 12:4). Obviously, then, a person cannot visit heaven and then describe whatever he sees and hears there. Second, the book Heaven Is for Real is contrary God’s emphasis on the priority and sufficiency of faith and Scripture. The book contains testimonies of how people have believed in God and heaven because of Colton’s alleged visitation, but the Bible says that without faith it is impossible to please God (Heb. 11:6), and faith comes by hearing God’s Word, not by signs and wonders (Romans 10:17). In his account of the rich man and Lazarus, Jesus taught that if someone does not hear the Scriptures, he will not “be persuaded, though one rose from the dead” (Luke 16:31). All of the signs and revelation we need are found in the completed canon of Scripture (John 20:30-31). The Bible is able to make the man of God “perfect, throughly furnished unto all good works “(2 Timothy 3:16-17). God has told us everything He wants us to know about heaven at this time. Third, the book Heaven Is for Real is contrary to the Bible’s plain teachings. For example, Colton says Jesus’ horse is rainbow-colored (p. 63), whereas the Bible says it is white (Rev. 19:11). Colton says the Holy Spirit shoots down power from heaven (p. 125), whereas the Bible says the Holy Spirit came from heaven at Pentecost and He is the power (Acts 1:8). Colton says everyone has wings in heaven except Jesus (p. 72), that the angel Gabriel sits on the left hand of God’s throne (p. 101), that the Holy Spirit is blue and sits in a chair near the throne of God (p. 102), and “for our Catholic friends” the book is happy to report that Mary stands in heaven beside Jesus (p. 152). Some might ask how Colton could learn secrets about his dead sister who died in the womb and facts about his great grandfather that he had not been told. The answer is demons. Paul warned that Satan transforms himself into an angel of light and his ministers as ministers of righteousness (2 Cor. 11:14-15). The book Heaven Is for Real also promotes the visions of child progeny Akiane Kramarik, who began “seeing heaven” at age four (pp. 141-144). Colton claims that the “Jesus” that he saw in heaven is the same “Jesus” that Akiane drew from her visions at age nine. But Akiane’s religious faith is a New Age type faith in a vaguely defined “God.” It is religious mysticism rather than faith in an infallible Revelation from God and the blood atonement of Christ. Even if we knew what Jesus looked like, we are forbidden by God’s law to make His likeness (Exodus 20:4).
_________________________________________________
"VISITS" TO HEAVEN AND HELL
BY JUSTIN PETERS
SEE: http://www.proclaimingthegospel.org/site/cpage.asp?cpage_id=180066646&sec_id=180014816 (FOURTH ARTICLE FROM BOTTOM OF LIST)

Justin Peters Explains Why Stories of Trips To Heaven

Do Not Line up With the Bible:

Posted by John at 8:21 AM Links to this post

Posted by John at 8:08 AM Links to this post