CHRISTIANS KICKED OUT OF STARBUCKS; NOT ALLOWED TO USE BATHROOM~BOYCOTT & SELL STOCK NOW!~DICTATOR TYPE CEO SCHULTZ GROOMED TO REPLACE HILLARY CLINTON FOR PRESIDENT

BOYCOTT STARBUCKS; SELL ITS STOCK NOW
IF YOU HAVEN'T ALREADY 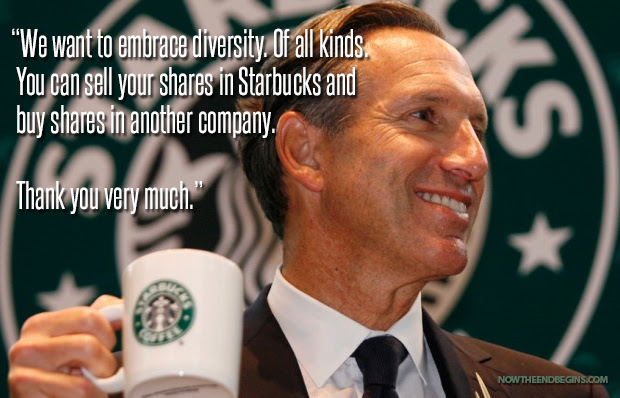 FROM: http://www.starbucks.com/blog/our-dedication-to-embrace-diversity
"Starbucks has supported the LGBT community for many years, and we have zero tolerance for discrimination of any kind. We have one of the largest Employer Resource Groups for LGBT employees in the United States helping to raise awareness about issues in the communities in which we live and work. Our benefits program has always offered domestic partner benefits in the United States and Canada, and Starbucks partners actively participate and organize local LGBT events in their communities. We’re also very proud of the 100% score we received on the Corporate Equality Index from the Human Rights Campaign. We will continue to work very closely with this organization and others on topics relevant to the community."

SCHULTZ ISSUES DICTATES ISSUED WITH THREATS TO CRUSH PERSONAL FREEDOMS, RIGHTS, CHOICES
SEE: http://www.infowars.com/newsletter-content/
EXCERPTS:
In 2013 the company told open carry gun owners their business was not welcome. In an open letter, Schultz said the debate surrounding the Second Amendment had “become increasingly uncivil and, in some cases, even threatening” and decided to disallow legal firearms in his stores.
Earlier this year a Starbucks employee wrote to Llewellyn H. Rockwell, Jr. providing details on the leftist agenda mingled with the corporate culture of Schultz and Starbucks. The anonymous friend said Ferguson and the race agenda does not represent “the sort of situation a sane company would want to make a staple of their day.”
“This isn’t anything new to Starbucks. The blatant and insulting Progressive overtones that get sent to the store front and the media are light compared to what happens internally,” he said.
All-Inclusive staff meetings with lower pay grade employees typically revolve around the latest in State propaganda. Their major plank has been Global Warming/Cooling/Simmering/Basting or whatever it’s called today, and climate “sensitivity” (Yes, especially when it comes to water.) and how we as “Responsible Corporate Citizens” need to minimize the waste that leaves a “giant footprint” in our communities and, wait for it, “Mother Earth”. If anyone ever doubted that Al Gore founded a religion, let’s allow this to clear that up. Individuals that seemed disinterested, perplexed, or annoyed were asked in a softly threatening manner if they would like to leave. The only time I saw this reversed was when an incredible majority (qt least 80%) didn’t react positively to a strongly worded suggestion that “We all get vaccinated”. Employees who smoke became a subject of said meetings. Though you won’t get called out directly, be prepared to be collectively skewered for daring to make personal choices.

The rainbow pride flag atop the Starbucks headquarters in Seattle on Monday, Jne 23, 2014.

CHRISTIANS KICKED OUT OF STARBUCKS;
NOT ALLOWED TO USE BATHROOM
FIRST AMENDMENT: Congress shall make no law respecting an establishment of religion, or prohibiting the free exercise thereof; or abridging the freedom of speech, or of the press; or the right of the people peaceably to assemble, and to petition the Government for a redress of grievances
STARBUCKS HAS BEEN OFFICIALLY PRO LGBT
ONE OF THEIR ADS:

EVEN SO, SOME CHURCHES PROMOTE STARBUCKS IN THEIR "CAFES"
SUCH AS:
http://c3church.com/non-denominational-church-clayton-nc/starbucks-church-cafe-nc/

https://alittlefoolishness.wordpress.com/2007/10/15/starbucks-coffee-served-here/
QUOTE: "Starbucks spokesman Wilfed Stoner shared his enthusiasm on these marketing agreements. “The coffee cafe in local churches represents a massive new market for us”"

"You Can't Drink Starbucks And Be Biblically Right"David Barton tells a Christian audience that they cannot drink Starbucks coffee because the company supports marriage equality.