TELL HILLARY THAT ABORTION
IS NOT CONTRACEPTION
& ABORTIFACIENTS KILL CHILDREN
WHICH INCLUDE GIRLS:

NO HILLARY, THE UNFINISHED BUSINESS IS TO INSURE
THAT YOU DON'T BECOME PRESIDENT!
LET HER HEAR THE OUTCRY AGAINST HER! 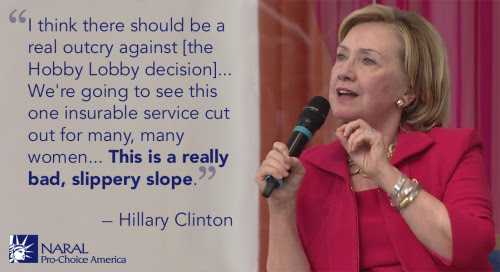 
Published on Jun 30, 2014
At an appearance at the Aspen Ideas Festival, Hillary Clinton blasted today's ruling in US v. Hobby Lobby, saying it was "deeply disturbing that we are going in that direction." "It's very troubling that a sales clerk at Hobby Lobby who need contraception, which is pretty expensive, is not going to get that service through her employer's health care plan because her employer doesn't think she should be using contraception," she said, according to POLITICO.
"It's the first time that our court has said that a closely held corporation has the rights of a person when it comes to religious freedom, which means the corporation's ... ['closely held'] employers can impose their religious beliefs on their employees, and of course denying women the right to contraceptives as part of a health care plan is exactly that."

OPT OUT OF ABORTION

SEE:
http://www.infowars.com/hillary-clinton-allowing-companies-to-opt-out-of-abortion-deeply-disturbing/
EXCERPT:
QUOTE FROM RON PAUL:
“I think the most profoundly confusing argument has been the argument that not being able to get free birth control is discrimination against women,” writes Ron Paul. “This, to me, is utterly amazing. If somebody wants something, and they wish to have something—they demand something—they say they have a right to it, which is absolutely wrong. That’s why we have this runaway welfare state. That’s why we have corporations taking over; because of this assumption. Rights are designed to protect people’s lives and their liberties. But not to fulfill their wishes and desires and demands. Besides, what about the discrimination against the people who have to pay?”


Abortion: The Globalist's Baptism Into The Death Cult:

ILLEGALS FROM ALL OVER THE WORLD CROSSING BORDER

on the U.S./Mexico border

"Our borders, wide open to illegal immigrants from all over the world, are becoming increasingly susceptible to infiltration by terrorist groups as the Obama administration drives an unconstitutional exodus towards amnesty."

"The increase in fatalities also includes an alarming amount of illegals known as “OTM” or “Other Than Mexican.”
“…Prior to last night it was running about 73 percent apprehended in the Rio Grande Valley are OTM,” says Dr. Vickers. “A lot of Central Americans but really from all over the world and we were informed last night that that number has escalated to 80 percent.”
Human smugglers known as “coyotes” run a tremendously lucrative smuggling operation that has grown from a sporadic undertaking into, for all practical purposes, a billion dollar institution.
“The Chinese are paying fifty thousand, the Indians are paying ten to twenty thousand, all the Central Americans the average is about seven thousand, so and the Mexicans are especially southern Mexico are paying three thousand so its a huge huge money event for the cartels probably even more lucrative than the drug business,” Dr. Vickers pointed out.
The Vickers have witnessed Syrians and Iranian money being brought through their property by the OTMs."