MIKE HUCKABEE'S COMMON CORE: EVOLUTION & FLIP FLOP~FROM RABID SUPPORTER TO THE OPPOSITE~WHO NEEDS ANOTHER RINO MORAL RELATIVIST PASSING HIMSELF OFF AS A CHRISTIAN?

DANGER AHEAD!!!
WHERE IS HIS "CHRISTIAN DISCERNMENT"?
MAYBE HE'LL NEVER HAVE IT
AS PRESIDENT EITHER;
COULD BE ANOTHER PUPPET OF THE NEW WORLD ORDER GLOBALISTS

HE'S THE "SHORT SIGHTED" ONE 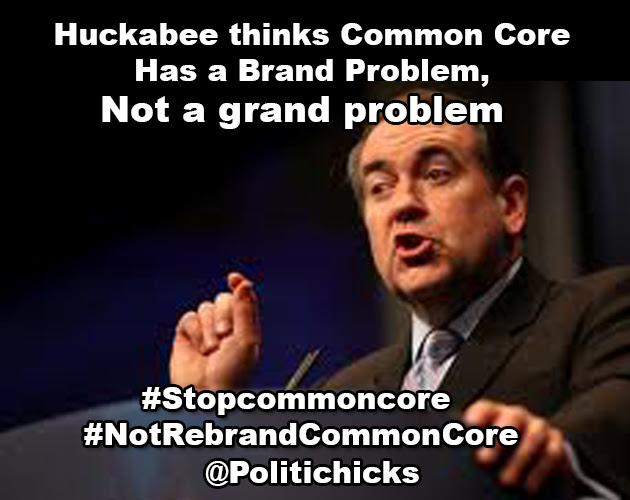 STATIST MIKE HUCKABEE:
COMMON CORE WAS ONCE:
"NEAR AND DEAR TO MY HEART"
SEE: http://gotnews.com/breaking-huckabee-2013-common-core-near-dear-heart/;

EXCERPTS: Former Arkansas Gov. Mike Huckabee urged Oklahoma lawmakers to resist throwing out new educational standards the Legislature approved back in 2010.
In a letter to Oklahoma lawmakers this week, he said the Common Core state standards have been “near and dear to my heart” since he served as governor in Arkansas.
“And it’s disturbing to me there have been criticisms of these standards directed by other conservatives, including the RNC (Republican National Committee). The truth of the matter is, these criticisms are short-sighted.”
“Like many of you, I’ve heard the argument that these standards ‘threaten local control’ of what’s being taught in Oklahoma classrooms,” Huckabee wrote. “Speaking from one conservative to another, let me assure you this simply is not true.”
HAD NO PROBLEM WITH A FEDERAL TAKEOVER OF EDUCATION BEFORE;
ONLY HAD A PROBLEM WITH THE NAME 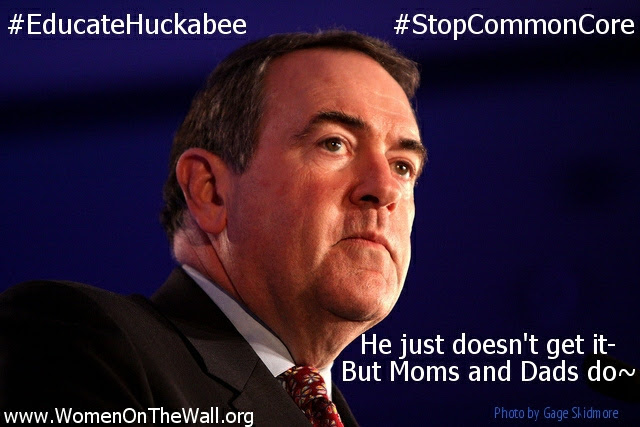 By Blake Neff
Mike Huckabee has thrown himself into the presidential race, and he’s eager for the world to know: He despises Common Core, and thinks it must be destroyed.
However, the former Arkansas governor’s own past statements reveal that this firm conviction is also a relatively new one, and raise the question of whether his new position is more about political opportunism than true convictions.

RELATED: 5 Reasons Why Huckabee Is Bad For Freedom

“[I] oppose Common Core and believe we should abolish the federal department of education. We must kill Common Core and restore common sense,” Huckabee says on his newly-launched presidential campaign website. The page touts Huckabee’s actions as governor of Arkansas, when he “fought for parents, students and local control.”
Meanwhile, in a recent tweet (which was later deleted for unknown reasons), the candidate suggests he opposes Common Core for enmeshing the federal government in education.

The straightforward position Huckabee puts forward on his website, however, masks a past in which he has offered eager praise for Common Core, or suggested that the only real problem with it is its name.
Like many Republicans, Huckabee was a supporter of Common Core before it became controversial, and he was still expressing strong support at late as 2013, when several other Republicans were starting to switch. Huckabee even defended the standards from Republican critics, arguing the conservatives had more reason to like Common Core than any other group.
In a letter to the Oklahoma legislature written in 2013, for instance, Huckabee urged legislators to stand up to conservative attacks against the standards, saying he’d been backing the ideas embedded in Common Core since before it was even written.
“These standards, known as Common Core State Standards, have been near and dear to my heart since I served as Governor of your neighboring state of Arkansas,” Huckabee wrote at the time. “And it’s disturbing to me there have been criticisms of these standards directed by other conservatives including the RNC. The truth of the matter is, these criticisms are short-sighted.”
By the end of 2013, Huckabee had started to repudiate Common Core, but in a way that suggested he was rejecting not its content, but rather its name and the support role the federal government had begun to play.
“[Common Core’s] been hijacked,” Huckabee said on his Fox News program Dec. 8, 2013, “and I don’t support the hijackers or the destination. But I don’t blame the airplane for getting hijacked.”
Also just two weeks before these statements, at a meeting of the Council of Chief State School Officers (CCSSO), Huckabee described the Common Core name as “toxic” and said it needed a makeover.
“Rebrand it, refocus it, but don’t retreat,” Huckabee told the CCSSO, according to The Washington Post.
Huckabee’s tendency to emphasize Common Core’s bad name over any substantive concerns continued in 2014. Last August, Huckabee suggested that Common Core simply wasn’t important enough to fight over.
“Stop the fight. Let’s not make this something that we’re going to shed blood for no particular value to the students. Put the students first. The programs are less important,” Huckabee told a press conference in August 2014. Huckabee gave the conference while standing with members of the National Hispanic Christian Leadership Conference, a group that has supported Common Core. [RELATED: Huckabee Asks GOP To Stop Common Core Feud]
Not only is Huckabee’s strong, total condemnation of Common Core a relatively new trait, but the governor’s reasoning for his switch raises its own questions. Like other Republicans, Huckabee has attributed his change of heart to the unexpected involvement of the Obama administration. Common Core left him, he maintains, not the other way around.
“What happened was that the federal government decided to get involved, tie it to the Race to the Top funds, started adding things like data collection, expanded it to curriculum, took on a number of other topics and subjects,” Huckabee told Meet the Press in January. Huckabee repeated this explanation during a recent appearance on an Iowa radio show.
Case closed? Not so fast. In Huckabee’s 2011 book A Simple Government, he actually praised Race to the Top as an excellent idea.
“I fully endorse the new federal program Race to the Top, which has states compete for additional education funds, allowing them to decide what reforms to enact rather than having specific reforms imposed on them from above,” Huckabee said in the book. This was no idle praise given to a new program before its details were known, as Race to the Top had already been running for about two years when it came out, and the nature of the program was no secret.
Huckabee’s other complaints have their own problems. While he points out that the federal government has started to use Common Core to push a national curriculum, the Obama administration has thus far done nothing to change the status quo from that of 2013, when Huckabee told Oklahoma legislators that “states and local school districts will determine how they want to teach kids, what curriculum to use, and which textbooks to use.”
Similarly, Huckabee’s criticisms about data collection don’t mirror any Common Core-related efforts launched by the federal government. While Arne Duncan and other Obama administration officials have talked optimistically about the potential of better data collection in schools, they’ve been doing so since the beginning, and to this day nothing in Common Core requires that states turn over any data to the federal government. Lastly, while Huckabee has complained that the federal government has added new subjects besides math and languare arts to Common Core, this has never actually occurred, and to this day the standards only cover those two subjects.
The Daily Caller News Foundation reached out to the Huckabee campaign to see if he could elaborate on his reasons for turning sharply against Common Core in the last couple years, but thus far the campaign has not replied.
Mike Huckabee’s rejection of Common Core may be perfectly genuine and honest. However, the relatively recent vintage of his opposition and the fuzzy explanation given for his switch will give ample room for critics to accuse him of politically-motivated opportunism.
______________________________________________________________

Huckabee: 'Stop The Fight' Over Common Core
Published on Aug 22, 2014
Conservatives should "stop the fight" over Common Core and instead consider the benefits that the academic standards offer students in struggling schools, former Arkansas Gov. Mike Huckabee said Friday. The position puts him at odds with a significant bloc of Republicans. Huckabee, who unsuccessfully sought the GOP presidential nomination in 2008 and is considering a 2016 run, acknowledged the standards have become politically unpopular. Tea party-styled conservatives brand the standards as big-government intrusion, while teacher unions oppose having their members graded on how well students learn the more rigorous skills.

WHAT HAPPENS WHEN A FOOL RUNNING FOR PRESIDENT TAKES EVERYTHING AT FACE VALUE AND JUST DOESN'T CHECK THE FACTS
ABOUT COMMON CORE'S ORIGINS;
THE BLIND LEADING THE BLIND

Posted by John at 6:04 PM Links to this post