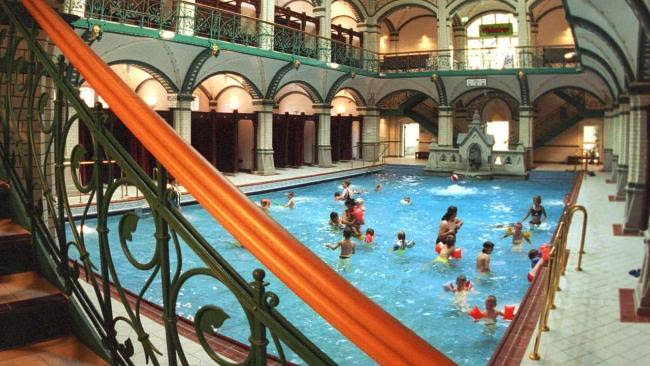 BY ROBERT SPENCER
SEE: http://www.jihadwatch.org/2016/01/germany-muslim-migrants-defecate-in-pool-invade-girls-changing-rooms; republished below in full unedited for informational, educational, and research purposes:

Did they behave this way in Syria or wherever they are from? Probably not. But they have nothing but contempt for the country of the kuffar.
“REPORT: Locals Fled Pool After Migrants Masturbated Into Jacuzzi, Defecated Into Kid’s Pool, Invaded Girls Changing Rooms,” by Oliver Lane, Breitbart, January 22, 2016:

A German swimming bath has banned migrants from entering the premises after a group of men went on an obscene rampage, laughing in the faces of pool staff when challenged about their grotesque behaviour.
A group of migrant men and women were caught on security camera at the Johannisbad baths in Zwickau, Saxony engaging in unacceptable behaviour, including masturbating into the jacuzzi. In separate incidents other groups of migrants were caught “contaminating” the children’t [sic] training pool by “emptying their bowels in the water”, and sexually assaulting other bathers, reports Bild.
The allegations against the migrant bathers has come to light thanks to a leaked internal letter from the Zwickau Town Hall, between the chief clerk to his department head, reproduced in part by German tabloid Bild. Writing of the historic swimming pool’s decision to close their doors to migrants until further notice, Rainer Kallweit wrote this week of a shocking incident which has left the baths abandoned by local swimmers.
In his report, the authenticity of which has since been confirmed by the city administration Mr. Kallweit wrote the shocking words:
“An asylum seeker has masturbated in the hot tub and ejaculated into the basin. This is also recorded on the surveillance camera”. He wrote that the group desecrating the jacuzzi, having been thrown out by the lifeguards later returned took “selfies” of themselves while they were in the tub, “jeering” the whole time.
Writing of another pool under his jurisdiction in the down of Zwickau, the town employee continued to say a group of “young unaccompanied women and children” used the children’s training pool, as none of the party could swim. He wrote, in classic civil servants language they “contaminated the pool by getting rid of the contents of their intestines. Native people immediately left the pool”.
This was not the only assault on the pool. The day before, wrote Mr. Wallweit “8 foreign men … in the sauna” harassed locals, forcing pool staff to pretend the Sauna was out of action when enquiries were made my migrant men, if there were at that time local women using it. He told his superiors: “furthermore, the lifeguards have to protect women and girls from the asylum seekers. Young men wanted to forcibly penetrate the female changing room”….
This behaviour in Zwickau is not by any means unique in Germany. Breitbart London has reported on a number of sex attacks on children in swimming baths over the past week, with girls as young as 11 and boys as young as three being targeted by migrant gangs. On one occasion in Munich, a pair of young girls enjoying the waterslide at their local pool were groped, “allegedly under their bathing suits”, “and possibly raped” by a gang of “refugees”.
The men believed to be responsible, Syrian and Afghan asylum seekers, were arrested and released by police.

BY Zero Hedge
SEE: http://www.infowars.com/bowels-emptied-women-molested-german-media-reveals-monstrous-cctv-footage-of-refugee-pool-mayham/; republished below in full unedited for informational, educational, and research purposes:

Europeans are struggling to come to terms with the wave of Mid-East refugees that have inundated the bloc over the course of the last 12 months.
The challenge, for those inclined to believe that German Chancellor Angela Merkel’s multicultural utopia is feasible, is to adopt an open minded approach to the prospect of integrating millions of Muslim asylum seekers into a largely Christian society while retaining a healthy level of skepticism with regard to the prospect of unifying two vastly divergent cultures.
Even those who are predisposed to being patient with the integration process are beginning to question the wisdom behind Berlin’s open-door policy.
Interestingly, it wasn’t the murder of 130 people in Paris that served as the catalyst for what amounts to a wholesale shift in sentiment towards migrants. While there was certainly a public outcry in the wake of the Paris attacks, the backlash coalesced after New Year’s Eve, when scores of women were reportedly assaulted by men of “Arab origin.”
Since then, voters have moved to express their discontent with the bloc’s handling of the refugee crisis by taking to the streets in what on many occasions have turned out to be violent protests.
The official response has been mixed. Germany has endeavored to keep the faith (as it were) by preserving the “yes we can” narrative in public, but in private, many German politicians claim the country is on the verge of closing its borders. Austria has apparently had enough, has suspended Schengen, and is now requiring refugees to learn German or risk losing access to welfare. The country has also developed a pictographic flyer designed to coach migrants on what types of behaviors are acceptable in polite Western European society.
Switzerland has adopted the Austrian flyer and Germany has developed its own cartoons the government hopes will to clear up any “confusion” about how asylum seekers should act once settled in Europe.
A particularly sensitive issue is pool etiquette. If you believe the media, refugees are having a particularly difficult time figuring out how to behave when swimming in public. The controversy led one small German town near Cologne (the site of the New Year’s Eve assaults) to ban adult male asylum seekers from swimming.
Well, despite the best efforts of European cartoonists, some refugees apparently didn’t get the message about proper pool behavior because according to “reports,” some asylum seekers were caught on closed circuit TV doing some rather lewd things at the Johannisbad baths in Zwickau. Below, find the story from Bild, which we present without further comment because frankly, there’s not much we can add here.
*  *  *
From “In The Swimming Pool, Bowels Emptied! Women Molested!”, originally published in Bild and Google translated for your amusement
According bathrooms GmbH have masturbated refugees when visiting swimming baths in pools and emptied their bowels in the water. They are women in sauna harassed and have tried to storm the ladies’ locker!
All this is evident from a letter from clerk’s office manager Rainer Kallweit to his superior departmental head Bernd Meyer. In the letter dated 19 January (Image exists) summarizes Kallweit a report of the security that service the city’s baths GmbH. The city administration has towards BILD confirm their authenticity letter!
Kallweit reports of a memorandum from the Johannisbad. It states inter alia: “An asylum seeker has masturbated in the hot tub and ejaculated into the basin. This is also recorded on the surveillance camera “And further:”. The lifeguards threw him out. The asylee came with his, cronies’ but again purely to get his cell phone.Together, visitors have ‘in the hot tub a hooting, Selfie’ done. “
“The users of this contaminated pool by there got rid of one’s own intestinal contents. Native people have immediately leave the bathroom. “
The memo continues: “Furthermore, the lifeguards have to protect women and girls from the asylum. Young men wanted to forcibly penetrate into the dressing of women and girls. These actions could previously be blocked.” BY HEATHER CLARK
SEE: http://christiannews.net/2016/01/24/life-at-conception-act-introduced-in-congress/; republished below in full unedited for informational, educational, and research purposes:

(NaturalNews) A Missouri mother has been accused of medical child abuse after requesting a second opinion regarding her 17-year old son’s medical care. Isaiah Rider, who suffers from neurofibromatosis, a rare condition causing tumors on the nerves, was told he could no longer see his mother following a surgery at Luries Children’s Hospital in Chicago, Illinois.
“One day I woke up, and I was surrounded by a bunch of doctors, and they told me that I wasn’t allowed to see my mother anymore,” said Rider in a YouTube video he made after being placed in foster care following his release. “I was shocked. I was shocked.”
Mother told of agency intervention after the fact
Their story began when he and his mother, Michelle, traveled to Chicago from their home in Missouri to visit specialists recommended by his Kansas City doctors. Rider underwent surgery at Luries hospital but his condition did not improve. He remained in severe pain, suffering from hours-long tremors in what was left of his amputated leg, prompting his mother to request he be transferred to another facility for a second opinion. This resulted in the intervention of Child Protective Services (CPS) in Chicago, which immediately seized custody of Rider, leaving no time for goodbyes.
Offended by Michelle’s audacity to question the hospital’s care, CPS was called without warning, seizing custody of Rider on April 15 and prohibiting any contact between the teenager and his mother. It would be 24 days before they saw each other again.
At the time, Rider says he was so drugged up that he had no idea what was going on. He was reportedly told “his excruciating pain was all in his head,” according to Medical Kidnap, and that he wasn’t allowed to see his mom again, or return to his girlfriend, friends or school back home.
Documents obtained by The Chicago Tribune reveal the hospital’s allegations, including that the mother moved Rider from hospital to hospital, disagreed with doctors’ advice and demanded powerful sedatives to relieve his pain.
Rider disputes allegations that his mother mistreated him; in fact he worships her love and care.
“She’s been there since day 1, through everything, every surgery. I look up to her for that. I love her. She’s the best person in my life”
Michelle, who is a veteran hospice nurse, told KMBC, “I did not want nor did I at any time request that Isaiah have heavy medications. It was quite the opposite as heavy narcotics did not appear to be helping at all.”
When Rider was fit to be released, Luries hospital placed him in a foster home in a rough part of Chicago, where the teenager says he feared for his life and had a gun pulled on him twice.
Eventually Rider was transferred to foster care in Missouri, where he lived with his grandparents, however, for reasons unknown he was taken involuntarily by ambulance back to Chicago again on December 6.
A post on a Facebook page created in support of Rider and his family’s ordeal, states that he’s allowed no visitors, except for his grandma, and is “IN PAIN.”
Updated Dec. 8, the post accuses the hospital of treating Rider like a prisoner, causing him unnecessary “emotional suffering.” The update continues:
BTW State of IL you are not helping him. You are failing Isaiah Rider. You are causing him harm. He needs to get appropriate medical care and you KNOW there is a hospital that has said they can help him. Yet you take him to Chicago to make him your prisoner?
Governor calls for review of Illinois Department of Child and Family Services
There are three upcoming court dates set on Dec. 9, 11, and 15 in Chicago to settle the Rider’s custody battle. A peaceful protest was held on Dec. 9 outside the Cook County Juvenile Court, allowing the public to express their support since they aren’t allowed in the courtroom.
Illinois State Governor Pat Quinn ordered a top state advisory committee to address problems at the Department of Children and Family Services, responding to recently exposed “severe problems” at state-funded residential care centers for abused and neglected children.
“The recent revelations regarding some residential youth centers in Illinois are alarming and unacceptable,” Quinn said. “They must be addressed immediately.”
Learn more: http://www.naturalnews.com/052708_medical_kidnapping_child_abuse_prisoners.html#ixzz3y1lzjP7f

Posted by John at 3:43 PM Links to this post