President Trump Full Press Conference with NATO Secretary General Stoltenberg 4/12/17
U.S. INTELLIGENCE SOURCE: SYRIA CHEMICAL WEAPONS ATTACK LAUNCHED FROM SAUDI BASE
Award winning journalist Robert Parry says incident was likely a false flag
BY PAUL JOSEPH WATSON
SEE: https://www.infowars.com/u-s-intelligence-source-syria-chemical-weapons-attack-launched-from-saudi-base/;
Award-winning Iran-Contra journalist Robert Parry says the chemical weapons attack in Syria was launched from a joint Saudi-Israeli special operations base in Jordan, according to his intelligence sources.
U.S. intelligence analysts determined that a drone was responsible for the attack and “eventually came to believe that the flight was launched in Jordan from a Saudi-Israeli special operations base for supporting Syrian rebels,” according to the source.
“The suspected reason for the poison gas was to create an incident that would reverse the Trump administration’s announcement in late March that it was no longer seeking the removal of President Bashar al-Assad,” writes Parry.

As we highlighted back in 2013 after another chemical weapons attack in Ghouta that was blamed on Assad, rebels freely admitted to Associated Press correspondent Dale Gavlak that they had been given the weapons by Saudi Arabia but had “handled the weapons improperly and set off the explosions.”
Parry’s background lends the information credibility. He covered the Iran-Contra scandal for the Associated Press and Newsweek and was later given a George Polk award for his work on intelligence matters.
The contention that the incident was a “false flag” to create a justification for air strikes has also been voiced by former Congressman Ron Paul as well as numerous other prominent voices, including Vladimir Putin himself, who went on to warn that rebels could now stage a similar incident in Damascus to goad the U.S. into toppling Assad.
Whoever was responsible for the attack does not take away from the horror of the event and the fact that innocent people and children died.
Parry dismissed the four page report released by President Trump’s National Security Council that blames the Syrian government for the chemical attack as being heavy on assertions but lacking actual evidence.
The white paper states, “we cannot publicly release all available intelligence on this attack due to the need to protect sources and methods,” although as Parry points out, “In similarly tense situations in the past, U.S. Presidents have released sensitive intelligence to buttress U.S. government assertions, including John F. Kennedy’s disclosure of U-2 spy flights in the 1962 Cuban Missile Crisis and Ronald Reagan revealing electronic intercepts after the Soviet shoot-down of Korean Airlines Flight 007 in 1983.”

Parry challenged the Trump administration to make its evidence publicly available, while also questioning why both CIA Director Mike Pompeo and Director of National Intelligence Dan Coats were not show in a photo released by the White House which shows the President and a dozen of his senior advisers monitoring the April 6 missile strike from a room at his Mar-a-Lago estate in Florida.
“Given President Trump’s spotty record for getting facts straight – he and his administration should go the extra mile in presenting irrefutable evidence to support its assessments, not simply insisting that the world must “trust us,” concludes Parry.
__________________________________________________________
After Icy Reception, Tillerson And Lavrov Meet To Discuss Syria / US Russian Relations

MANY OF TRUMP'S STAUNCHEST ALLIES FEEL BETRAYED BY SYRIA ATTACK

WAR: Neocon Agenda We've Seen Before
MANY OF TRUMP'S STAUNCHEST ALLIES
FEEL BETRAYED BY SYRIA ATTACK
BY ALEX NEWMAN
SEE: https://www.thenewamerican.com/usnews/politics/item/25803-many-of-trump-s-staunchest-allies-feel-betrayed-by-syria-attack;
Many of President Donald Trump's staunchest supporters — the very people who put him in the White House — expressed feelings of anger and betrayal following the administration's illegal military attack on Syria. Among the prominent Trump backers who have spoken out so far are conservative pundit Ann Coulter, one of Trump's earliest and fiercest supporters, along with radio host Michael Savage, one of America's most popular talk-show personalities, who is credited by some analysts with putting Trump in the White House. Also speaking out was former U.K. Independence Party (UKIP) leader and Brexiteer Nigel Farage, along with his successor Paul Nuttall. In France, National Front Leader Marine Le Pen also condemned the attack. And in Congress, true constitutionalists such as Senator Rand Paul pointed out that Trump's attacks were unconstitutional.
Among those who seemed most hurt by what they viewed as Trump's betrayal was conservative commentator Coulter, who was campaigning for Trump back when virtually everyone was ridiculing him as a joke. In fact, she was so pro-Trump, she wrote a book entitled In Trump We Trust. At this point, though, she said it may have to be changed to "In Trumpism We Trust" instead. On social media, Coulter expressed frustration immediately. “Those who wanted us meddling in the Middle East voted for other candidates,” she said on in a post shortly after the attack began. “Trump campaigned on not getting involved in Mideast. Said it always helps our enemies & creates more refugees. Then he saw a picture on TV.” 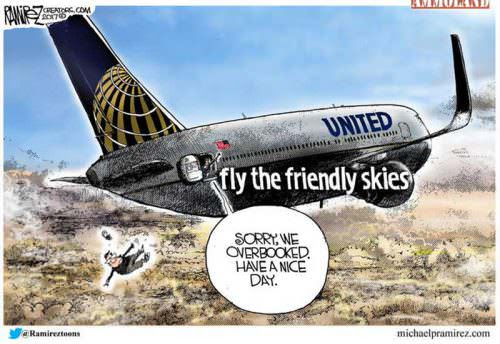 MAKING ROOM FOR PREFERRED AIRLINE'S STAFF
BY POLICE THUGS USING EXCESSIVE FORCE
Published on Apr 10, 2017
United Airlines had a passenger dragged off a flight at O'Hare International Airport on Sunday after the flight was overbooked.

Published on Apr 12, 2017
Overbooked United Airlines Have Beaten And Savagely Removed A 69 Year Old Dr. David Dao, From United Flight 3411 By The Chicago Aviation Police Department. Airlines have overbooked the seats in case someone does not show up that made Dr. David Dao to leave the airplane though he had paid for that flight, David refused leaving the plane so airlines had to ask Chicago police to remove him from an airplane, doctor hit his face at the armrest that caused bleeding from his mouth and losing mind for a short period. In 2003 Dr. David Dao was arrested and eventually convicted of prescription drug-related charges. He was also convicted of several felony charges of obtaining prescription painkillers by fraud or deceit in November 2004. He was placed on five years of supervised probation in January 2005 Surrendering His medical license the next month. He was permitted to resume practicing in 2015 under certain conditions, his past is not great but he did not deserve that kind of treatment.

Doctor Was On Phone With United Moments Before Being Dragged Off Plane
Published on Apr 12, 2017
Dr. David Dao, 69, the doctor who was dragged off a United Airlines flight Sunday, was filmed moments before the altercation, apparently on the phone with the airline after he was bumped to make room for an employee. He continues to be the center of worldwide attention as the new video shows him making it clear he could not give up his seat. United's CEO Oscar Munoz is promising the scene will never be repeated.

News Interview With United Airlines
CEO Oscar Munoz; Makes "Apology" in  'Shame"
ALLEGED "SYSTEM FAILURE";
"WE EMPOWER OUR FRONT LINE PERSONNEL
TO A DEGREE"
Published on Apr 12, 2017
Oscar Munoz, the CEO of Untied Airlines, today said he felt "shame" when he saw the viral video of a bloodied passenger dragged from one of his airline's flights Sunday night.

The passenger, David Dao of Elizabethtown, Kentucky, a 69-year-old physician specializing in pulmonary disease, is at a Chicago hospital undergoing treatment for his injuries, according to lawyers for his family.

United told ABC News that passengers were offered up to $800 to give up their seats for four crew members who needed to board.

When no one volunteered, the airline generated a list of four names to be removed from the flight and be re-accommodated, according to the airline's contract of carriage.

Of the four people, Dao was the only one who refused to comply, which triggered a call to airport police.

JIMMY KIMMEL SEES THE HUMOR IN THIS TRAGEDY; BOYCOTT SUGGESTED

The viral video of the passenger being beaten and dragged off a commercial flight is about more than one airline. It’s not about the man’s past or his race. Government & the corporations that work with closely with government, are treating us like slaves and using B.F. Skinner’s techniques of conditioning. We will stand united and demand our freedom and dignity or we will be beaten down separately.

"Are we going to continue being treated like cattle?" - Lawyer for a United Airlines passenger fires off on the airline for their use of excessive force on his client. This came in lieu of a viral video which showed the passenger, Dr. David Dao, being forcibly removed from a United flight, after his refusal to relinquish his seat.

The Lawyer lambasted the airline for what he called a culture of 'bullying' , which he claims to be widespread through out the airline industry.

High-Powered Attorneys for Dr. David Dao, a passenger who was thrown out of a United Airlines flight, hold a press conference to discuss their upcoming legal battle against the airline. This follows the release of a video which showed Doctor David Dao being forcibly removed from a United Airlines flight following his refusal to voluntarily give up his seat.
DAUGHTER LISTS HER FATHER'S MULTIPLE INJURIES