STUDENT ASSAULTED & PUNISHED AFTER SUPPORTING GUN RIGHTS~ALEX NEWMAN & DR. DUKE PESTA REVEAL THE DETAILS
When public school officials in Middleburgh, New York, called an assembly and used it to promote outrageous anti-Second Amendment propaganda demonizing American gun owners, at least one student objected. After the assembly, 17-year-old Christian Breault expressed his concerns about it to other students. In response, Breault was attacked by an indoctrinated anti-gun student who had become agitated from the propaganda pushed by the school. And when Breault defended himself from the bully, the same school officials who sought to indoctrinate the children with their agenda punished him for it.
Article: http://bit.ly/2u8Eb9R
Student Assaulted for Pro-Second Amendment Views, Then Suspended for Defending Himself
BY MATT MARGOLIS
SEE: https://pjmedia.com/trending/student-assaulted-pro-second-amendment-views-suspended-defending/;
Posted by John at 10:25 AM Links to this post

YOU TUBE SINGLES OUT ALL GUN CHANNELS FOR SPECIAL EXCLUSION & DISCRIMINATION
SEE: https://www.ammoland.com/2018/03/youtube-singles-out-gun-channels-special-exclusion-discrimination/#axzz5ATeQoYY7;
republished below in full unedited for informational, educational, and research purposes:

USA – -(Ammoland.com)- About 11 months ago, this is how I started the show…. Yea… at the time I fully believed that YouTube was not in fact going to come down hard on gun content creators. It seems as though I was completely wrong. As you guys may have seen by now YouTube has released a new policy about guns. I'll break this down the best I can and then we'll talk about what all of this means.
To my knowledge, this is the first time Youtube has actually segregated out firearms into its own category. The policy states that youtube prohibits certain kinds of content featuring firearms. OH BOY. Then they get into specifics. They don't allow content that intends to sell firearms or firearm accessories privately or links to sites that sell guns. Even more specifically, they outline accessories that “enable a firearm to simulate automatic fire or convert a firearm to automatic fire” … like bump stocks, binary triggers, etc. They also specifically mention everyone's favorite vague term… high capacity magazines but they actually define it as mags or belts that hold more than 30 rounds. Drum mags be damned.
It keeps going. They dont allow content that provides instructions on manufacturing a firearm, ammunition, high capacity magazines, homemade silencers, or accessories like they mentioned in the other portion. So if you show how to complete an 80% gun, say goodbye. If you show how to reload ammo, say goodbye.

And the last and quite possibly the worst part… they don't allow content that shows users how to install any of the aforementioned accessories. HOLY ____. This is insane.

Think about it this way… someone could argue that simply inserting a magazine into a gun is showing how to install that accessory. Someone could argue that simply taking the gun apart and reassembling it would be demonstrating how to build it. No more gunsmithing videos, no more reloading videos, no more educational content about guns AT ALL. And god forbid you give a positive review. That could be argued as a marketing or sales tool and you could have your channel shut down for simply talking about a product you actually like. Someone could argue that training on how to more proficiently use your firearms would a violation as it might make you shoot faster. On top of all of this… they recommend that people report policy violations by flagging the video. What that means is that youtube is opening the door to an entire subculture of undereducated anti gun people to come in and flag every little piece of gun related content they see and shut us down across the board. THIS IS BAD.
And this goes far beyond just us content creators. They are essentially silencing an entire industry. Imagine if the main resource for gun related content suddenly disappears. The direct line to a massive number of consumers would disappear overnight and I am very skeptical of anyone's ability to bring them to a new platform in great enough volume to effect change. And the world would keep moving forward while the gun industry remains behind.
Some might say, well what about Facebook? What about instagram? Well first those are both owned by Facebook, which in recent months has shifted its algorithm and will continue to do so and push people AWAY from business pages and in a more general term, away from firearms related content. The days of easily distributing content on Facebook and instagram as a business are behind us now. And you might think, im not a business or a content creator, why does that matter? If the gun industry disappears from a platform, and you are completely unaware of what is happening, sales will PLUMMET and the gun industry will suffer in a big way.
This is not a joke. Its not April fools. This is one of the largest controllers of internet traffic, silencing an entire law abiding industry.
Which begs the question… can this be stopped? That's really tough to say. We were able to bring channels back from the dead like Hikock45 with a huge concentrated effort and I would like to hope that YouTube's policies can be shifted with a similar effort. You need to let youtube know that this is NOT okay. You can send them a message directly on the gun policy page thats linked in the description, OR you can hit them on social media everywhere and let both Google and YouTube know that you will not be silenced.


As far as TGC goes, This will absolutely impact us a big way. Without knowing exactly how things will shake out, I can't predict the exact path but this could be a big problem. You can rest assured I am on it. I've already contacted YouTube looking for true clarification on all of this. If you guys want to support what we do here and stay up to date on gun news AND this attack on the firearms industry you can do that on Patreon.com/theguncollective, There is a link down in description for that. Stay tuned because I will have more for you guys tomorrow. When I know something, you'll know something.


SEE: https://www.ammoland.com/2018/03/youtube-bans-censors-major-gun-manufacturer-without-warning/#axzz5ATfILifU; republished below in full unedited for informational, educational, and research purposes:


APOPKA, Fla. –-(Ammoland.com)- On Tuesday, YouTube banned the channel belonging to Spike’s Tactical, a well-known gun and AR-15 manufacturer, without prior notice or warnings.
When thousands of Spike’s Tactical followers now attempt to visit the company’s YouTube channel, a red banner says, “This account has been terminated due to multiple or severe violations of YouTube's policy against spam, deceptive practices, and misleading content or other Terms of Service violations.”
However, according to representatives from Spike’s Tactical, they claim they have not received any prior warnings about the content of their channel and feel they are being targeted because they are a gun manufacturer and for their vocal support for conservative issues.

“This is without question an attack on free speech,” said Kit Cope, marketing director of Spike’s Tactical. “We feel strongly that after they get done going after guns, they’ll continue to ban and erase content that falls in line with conservative ideologies like they have already demonstrated with the deletion of anti-abortion videos and the like.”

While Spike’s Tactical has been known for delivering controversial marketing materials across other mediums, their YouTube page has remained nearly entirely educational and served the purpose of demonstrating their products.

“While we rarely believe in government intervention, with the recent exposure of Google, YouTube and Facebook’s power and their demonstrated manipulation of the masses, we believe something needs to be done to ensure the public is able to continue to be able to express themselves freely, even if it is something we don’t necessarily agree with, but especially when it is something that is constitutionally defined as a right,” said Cope.

In addition to this recent issue with YouTube, Facebook has continually prohibited Spike’s Tactical for paying to boost their posts because they are a gun manufacturer, representatives from the company said.
About Spike’s Tactical

BY JAMIE WHITE
SEE: https://www.infowars.com/youtube-faces-backlash-after-banning-firearm-demo-videos/; republished below in full unedited for informational, educational, and research purposes:
YouTube is shutting down virtually all videos featuring firearms, infuriating many users.
According to YouTube’s updated restrictions, the site no longer allows content that “Intends to sell firearms or certain firearms accessories through direct sales…or links to sites that sell these items.”
The unprecedented decision is a major move against free speech, as there are thousands of gun channels on YouTube who didn’t receive any warning of the upcoming “transition.”
“As much as I appreciate that they are now defining their guidelines much more clear…they have imposed this NEW rule without talking to anyone beforehand and there is no transitional period,” saidJörg Sprave, a YouTuber who produces weapons demo videos.
“Many gun channels must now be afraid, as they might get plenty of strikes in no time for older videos and then lose their channels. They should at least get some time to clean up their videos so the new rules are kept. Again, not the way you treat ‘partners.’”
For example, YouTube has wiped out all the videos of Spike’s Tactical, a firearms company affiliated with Infowars, for “repeated or severe violations of our community guidelines.”
“The Liberal Left will slowly chip away at our freedoms and erode our rights, and the first step is to squelch our voice,” the firearms company said in a statement.
“To say we’re f*cking pissed is an understatement. However, we are not backing down from these bitches. SHALL NOT INFRINGE!”
YouTube issued a statement defending its decision.
“We routinely make updates and adjustments to our enforcement guidelines across all of our policies,” a YouTube spokeswoman said. “While we’ve long prohibited the sale of firearms, we recently notified creators of updates we will be making around content promoting the sale or manufacture of firearms and their accessories.”
Twitter:

BIDEN SAYS HE WOULD HAVE ‘BEAT THE HELL OUT’ OF TRUMP IN HIGH SCHOOL FOR DISRESPECTING WOMEN~BUT HE HAS DEMONSTRATED PREFERENCE FOR YOUNG DEFENSELESS GIRLS & WOMEN, GLOBALISM, OFFICIATING AT SAME SEX "UNIONS"

“They asked me if I’d like to debate this gentleman, and I said ‘no.’

I said, ‘If we were in high school, I’d take him behind the gym and

beat the hell out of him.'”

BUT HE HAS DEMONSTRATED PREFERENCE FOR DEFENSELESS YOUNG GIRLS &
WOMEN AT HAND
Joe child touching, smelling and whispering condensed: 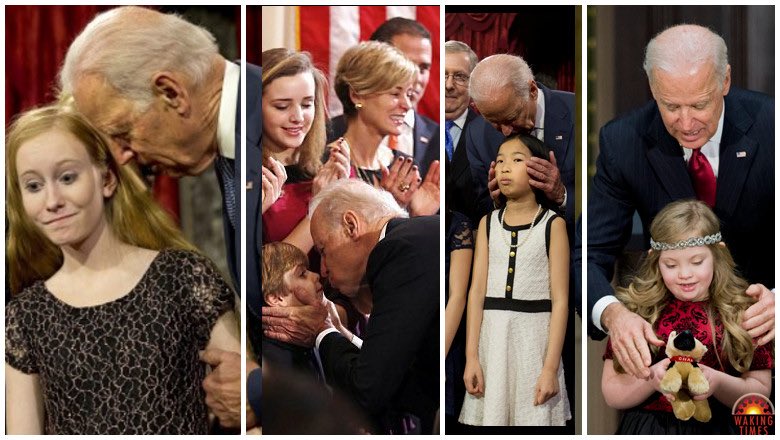 SEE: https://www.infowars.com/biden-says-he-would-have-beat-the-
hell-out-of-trump-in-high-school-for-disrespecting-women/;
Former Vice President Joe Biden took fresh jabs at President Donald Trump on Tuesday while speaking at an anti-sexual assault rally, telling students at the University of Miami that he probably would have “beat the hell out” of Trump if they’d attended school together.
“A guy who ended up becoming our national leader said, ‘I can grab a woman anywhere and she likes it,'” Biden said. “They asked me if I’d like to debate this gentleman, and I said ‘no.’ I said, ‘If we were in high school, I’d take him behind the gym and beat the hell out of him.'”
“I’ve been in a lot of locker rooms my whole life,” Biden continued. “I’m a pretty damn good athlete. Any guy that talked that way was usually the fattest, ugliest S.O.B. in the room.”
Biden made the comments Tuesday afternoon at the university’s “It’s on Us” rally, an event aiming to change on-campus culture surrounding sexual assault.
Read more

______________________________________________
Alex Jones presents two video clips of Former Vice President Joe Biden calling for violence against the President on two separate occasions. Is Creepy Joe be trying to instigate violence?
Nullify Biden’s
DEFENSELESS SCHOOLS ACT of 1990
Supreme Court Justice Clarence Thomas says the 2nd Amendment is “a disfavored right in this court (SCOTUS)”. School safety is NOT the responsibility of the President or the federal government. Joe Biden’s 1990 “Gun-Free School Act” has already been nullified by many Sheriffs and schools but some teachers are pushing back. 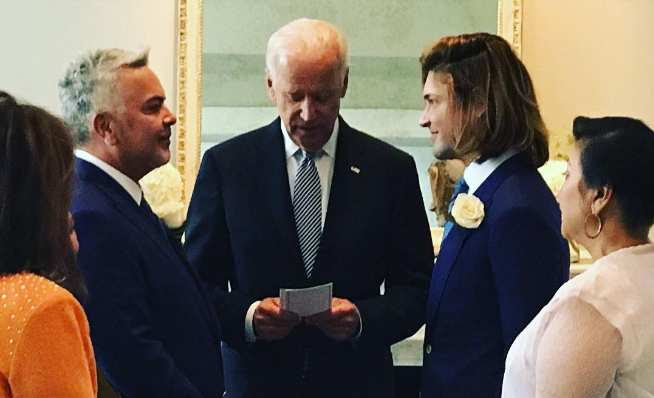