Zechariah 4:6-King James Version (KJV)
"Then he answered and spake unto me, saying,
This is the word of the Lord unto Zerubbabel, saying,
Not by might, nor by power, but by my spirit, saith the Lord of hosts."

MELINDA GATES COMMITS $375 MILLION
FOR POPULATION CONTROL & ABORTION
BY DAVE BOHON
SEE: https://www.thenewamerican.com/culture/faith-and-morals/item/26514-melinda-gates-commits-375-million-for-population-control-abortion;
Pointing to President Trump's move early in his administration to cut off funding to health- and family-planning NGOs that include abortion in their “services,” Mrs. Gates told the assembled population-control bureaucrats that “this is a difficult political climate for family planning. I’m deeply troubled, as I’m sure you are, by the Trump administration’s proposed budget cuts.”
As reported by The New American, shortly after taking office in January, President Trump signed an executive order re-implementing President Reagan's 1984 Mexico City Policy that blocks U.S. taxpayer funding to groups that perform and promote abortions overseas (the policy had been rescinded by President Obama, and earlier by President Clinton).
Following up on that signature, on May 15 the Trump administration announced an expansion of that $600 million funding ban to encompass all U.S. international healthcare, which amounts to nearly $9 billion. “The administration said that under the expanded order, called officially the Protecting Life in Global Health Assistance plan, the same amount of funding would still be available globally, but would only go to groups that promise not to perform abortions as part of their 'family planning' strategies,” we reported.
Mrs. Gates said that her foundation's funding will be earmarked only for contraception and sex education, but, reported LifeNews.com, “the money also will indirectly fund abortions, too. The billionaire family already gives money to some of the largest abortion chains in the world, including Planned Parenthood and Marie Stopes International.” LifeNews went on to explain that “the fungibility of money makes it easier for pro-abortion organizations to provide abortion internationally. In other words, every dollar the Gates Foundation gives to Planned Parenthood for distributing birth control or building an abortion-friendly clinic frees up a dollar in Planned Parenthood’s budget to spend elsewhere.”
The Gates Foundation grant database reveals that, between 2009 through 2013, the foundation gave Planned Parenthood of America, the International Planned Parenthood Federation, and Planned Parenthood of Western Washington some $71 million. It also funded the British abortion conglomerate Marie Stopes International to the tune of $46.1 million in 2012.
While Mrs. Gates considers herself a practicing Catholic, her position on contraceptives and birth control put her squarely at odds with the Church. In comments earlier this year she called contraceptives “one of the greatest anti-poverty innovations the world has ever known.”
Additionally, she declared that “contraceptives empower women,” arguing that birth control increases economic productivity in developing countries by giving women more freedom to work, and also leads to smaller families so that parents can devote more time and resources to the children they “choose” to bring into this world.
Mrs. Gates has offered her own life as a testament to the “freeing” power of birth control. “It’s no accident that my three kids were born three years apart — or that I didn’t have my first child until I'd finished graduate school and devoted a decade to my career at Microsoft,” she wrote earlier this year in Fortune magazine. “My family, my career, my life as I know it are all the direct result of contraceptives. And now, I realize how lucky that makes me.”
In a recent BBC interview, Mrs. Gates said she felt “optimistic” that the Catholic Church would one day change its position on contraception for the sake of women in developing countries. “We work very extensively with the Catholic Church and I’ve had many discussions with them because we have a shared mission around social justice and anti-poverty,” she said. She added, “I think what this Pope sees is that if you’re going to lift people out of poverty, you have to do the right thing for women.”
But John Grabowski, a professor of moral theology and ethics at Catholic University of America, said that such a change is virtually impossible. “The Church’s teaching on opposing contraception isn’t a recent teaching, it’s not something made up by Pope Paul VI in 1968,” he told the Catholic News Agency, referencing the Pope's encyclical of nearly 50 years ago that clarified the Catholic Church's teaching on family planning and contraception.
Noting that the Church has addressed the issue on several occasions in recent history, Grabowski said that “this has been the teaching of the Church from its beginning, so the Church [including Pope Francis] can’t change constant, universal, authoritative teaching.”
______________________________________________________

COUNTERING TRUMP WITH MILLIONS
Melinda Gates Keynote: London Summit
on Family Planning
Posted by John at 11:28 AM Links to this post

MAGA: TRUMP'S BEEN PRESIDENT
FOR SIX MONTHS NOW
President Trump Weekly Address 7/21/17
Posted by John at 11:15 AM Links to this post


Turkey has decided to knock the U.S. via its state news agency by leaking out secret details of U.S. troop locations in northern Syria.
Anadolu news agency published a list of 10 U.S. military installations in northern Syria and even included details about the number of troops in specific areas, which is a shocking move for a NATO ally, The Daily Beast reports.
Two of the bases were already known. Some other locations had previously leaked out through a news agency in Iran, but Turkey compiled all of the information and put it out on blast through Anadolu Tuesday via its English language site.
A spokesman for Operation Inherent Resolve asked The Daily Beast not to publish base details from the Anadolu news agency….

IT'S OFFICIAL: THE PLAN TO KILL INTERNET FREEDOM HAS BEEN LAUNCHED~GOOGLE'S WORST CENSORSHIP YET

IT'S OFFICIAL: THE PLAN TO KILL INTERNET FREEDOM HAS BEEN LAUNCHED
Published on Jul 20, 2017
Alex Jones breaks down how the globalists have launched their assault on Internet freedom.

Google-Owned YouTube Launches
Worst Censorship Yet
Published on Jul 20, 2017
Google targets Infowars yet again, this time they're attempting to shut down The Alex Jones Channel on YouTube.

DR. DUKE PESTA: HARVARD HYPOCRISY
Published on Jul 20, 2017
📺 Harvard University—that smug bastion of intellectual elitism, the gold standard of academic exclusivity, the Grand Panjandrum of the Brahmin class of Ivy League schools, which trades on the exclusivity of its name and coasts on the privilege afforded by its bloated and tax-sheltered endowments—has proposed prohibiting students from joining “final” clubs, including sororities and fraternities, because…wait for it…they lack sufficient inclusivity! | Full Article: http://bit.ly/2vogUNH
Posted by John at 10:48 AM Links to this post

EYE WITNESS TO MASS EXTERMINATION OF CHRISTIANS IN THE MIDDLE EAST TELLS ALL
Published on Jul 20, 2017
Ezra Levant, founder of Rebel Media, joins Alex Jones to discuss how the mainstream media over-hypes the humanitarian crisis of Muslims in the Middle East but covers-up the extermination of Christians.

MUSLIMS FAVORED, CHRISTIANS IGNORED IN CAMPS,
DESPITE MUSLIM RAPES, SEX SLAVES
Posted by John at 8:04 AM Links to this post 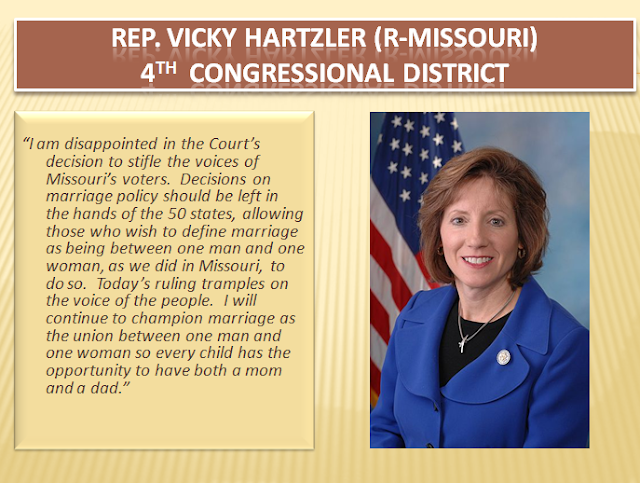 Last week, 23 Republicans joined all of the Democrats in the U.S. House of Representatives to defeat an amendment that would have ended Barack Obama's policy of funding "gender-reassignment" surgery for solders. The amendment was offered by Rep. Vicky Hartzler (R, Mo.), who said during debate on the bill, "Military members undergoing transition surgery are non-deployable for up to 267 days. Similarly, regular hormone treatments renders individuals non-deployable into the future. It makes no sense to create soldiers who are unable to fight and win our nation's wars and unfair to non-transitioning individuals who must leave their families and deploy in their place" ("House rejects attempt to ban transgender surgery for troops," AP, Jul. 13, 2017). Republican Rep. Duncan Hunter of California, a Marine veteran, said, "Figure out whether you're man or a woman before you join. U.S. taxpayers shouldn't have to foot the bill." This is a moral issue as well as a military readiness issue, and the fact that the Republicans can't pass something as common-sense and widely supported as this is evidence that the nation is under God's curse for its wickedness. (According to a Rasmussen poll, only 23% of Americans believe that opening the military to transgenders is right.) "As for my people, children are their oppressors, and women rule over them. O my people, they which lead thee cause thee to err, and destroy the way of thy paths" (Isaiah 3:12).
___________________________________________________

The following is excerpted from Dr. Peter Saunders, Christian Medical Fellowship (CMF) Chief Executive, CMFblog.org.uk: "So how should Christians respond to the phenomenon of transgender? First, we need to see it through the lens of creation. The Bible is unashamedly binary. Genesis 1:27 tells us that God created man in his own image--male and female. This is perfectly consistent with what we see in nature--male and female are different--genetically, hormonally and physically. Researchers have identified 6,500 genes that are expressed differently in men and women. Next, we must appreciate that we live in a fallen world where our collective rejection of God (Genesis 3) has affected the human race at all levels--physical, psychological, emotional and spiritual--so we should expect to find conditions like intersex and transgender. People affected by these conditions are often deeply hurting and we need to treat them with the love and respect we should show to any human being made in God's image. We are all tainted by the consequences of the fall and we are all sinners in need of God's forgiveness. Third, we must not capitulate to transgender ideology. Loving people does not mean affirming their false beliefs, using their chosen names, admitting them to their chosen facilities, allowing them to compete as the opposite sex in sports events and offering them hormones and gender reassignment surgery. That is not love--it's actually a form of abuse. You might get called a transphobic bigot or worse. But the Bible, science and common sense are on your side. God created us male and female. It's really that simple. Fourth, we must grasp the gospel opportunity transgender presents. Jesus welcomed everyone but in so doing he did not endorse all their beliefs and behaviour. Rather he called them to repentance and faith--to a life of obedience enabled by the Spirit, to be transformed by the renewal of their minds (Romans 12:1-2). And he called them to find their identity not in their chosen gender, or anything else, but in him."
______________________________________________________

Posted by John at 7:56 AM Links to this post