"YOU DIDN'T BUILD THAT ALL BY YOURSELF":

ECONOMY THE INVERSE OF HIS NARCISSISTIC IMAGINATION

Barack Obama The first President in US history to not attain 3% GDP growth even though he had eight years to do it. A President who spent so much he slowed any growth he was generating. The national debt grew from 11.5 trillion to 20 Trillion under Obama. As did the Misery Index by 53%. Food Stamp recipients rose by a staggering 42%. Ironically, gun manufacturing boomed under the UN gun grabbing rhetoric of Obama’s by 192%. But we are all supposed to believe that the current roaring economy is due to Obama’s economic recovery strategy. Not President Trump’s corporate tax cuts or the reopening of factories humming the tune made in America again.
Dan Bongino, Ex Secret Service Agent,

The country isn’t going to fall for his lies again

BY OWEN SHROYER
SEE: https://www.infowars.com/watch-live-barack-obama-insults-america-takes-credit-for-trump-job-growth-in-campaign-speech/;
Posted by John at 1:17 PM Links to this post

GERMAN INTERIOR MINISTER: MASS MIGRATION "MOTHER OF ALL POLITICAL PROBLEMS---I TOO WOULD HAVE TAKEN TO THE STREETS"

GERMAN INTERIOR MINISTER:
MASS MIGRATION "MOTHER OF ALL POLITICAL PROBLEMS---I TOO WOULD HAVE TAKEN TO THE STREETS"
BY CHRISTINE DOUGLASS-WILLIAMS
SEE: https://www.jihadwatch.org/2018/09/german-interior-minister-mass-migration-mother-of-all-political-problems-i-too-would-have-taken-to-the-streets; republished below in full unedited for informational, educational and research purposes:
German’s interior minister Horst Seehofer has boldly come out in support of the recent “mourning march” for victims of  “killer migrants” in Germany, stating that he, too, would have taken to the streets in protest if he did not hold the position as minister. Seehofer also said that “the migration issue is the mother of all political problems in this country.”
Angel Merkel, on the other hand, referred to the March as “hate.” By so doing, she washes her hands of all responsibility for Muslim migrant assaults and jihad murder. Merkel and globalists like her prefer to ignore the hate of jihadists and “killer migrants.” Instead, they call out those who shed light on real hate, slapping the label of “Islamophobe” upon them.
Oddly enough, not long ago, Merkel stated that “we have refugees or people of Arab origin who bring another form of anti-Semitism into the country.” 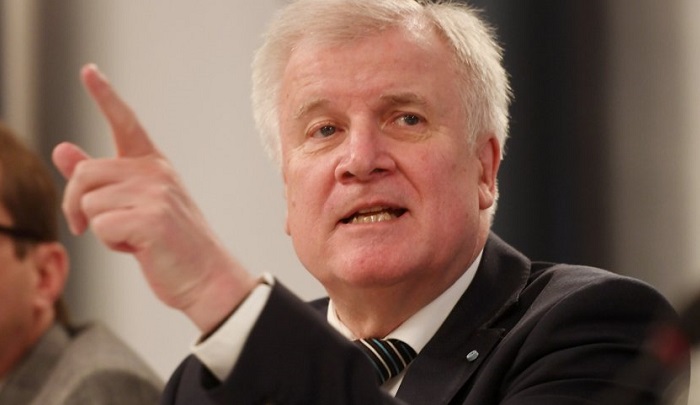 The German interior minister believes mass migration has become “the mother of all political problems” for the EU country, while Angela Merkel is describing the third world influx merely as a “challenge” and slamming protests against alleged killer migrants as “hate”.
Asked about the decline in popularity of Chancellor Merkel’s Christian Democratic Union (CDU) party and his related Christian Social Union (CSU) party, Horst Seehofer said Merkel’s decision to throw Germany’s borders open was a major driver behind the growth of the right-wing populist Alternative for Germany (AfD).
“For the first time, we have a party to the right of the Union that could establish itself in the medium term amidst a divided country,” he told the Rheinische Post, as polls show the AfD now in second place behind the CDU/CSU bloc.
The eurosceptic AfD’s dramatic ascent is “not only” down to voter concern over mass migration, said Seehofer, “but the migration issue is the mother of all political problems in this country. I have been saying this for three years. And this is confirmed by many surveys.”
Speaking of events in Chemnitz, where the murder of 35-year-old German-Cuban Daniel Hillig, allegedly at the hands of asylum seekers, prompted large-scale demonstrations against migration policy in Germany, the CSU heavyweight said he understood the “outrage” felt following the “brutal homicide”.
“Were I not a minister, I too would have taken to the streets as a citizen — of course not with any of the radicals,” Seehofer stated, before stressing that authorities should show “zero tolerance” to individuals who “incite violence” or perform “Hitler salutes”…..

BABY MURDER "ADVOCATE", METHODIST PASTOR, WRESTS BIBLE VERSE TO DEFEND FORCING CHRISTIANS TO FUND ABORTIONS
SEE: http://the-trumpet-online.com/methodist-pastor-wrests-bible-verse-defend-forcing-christians-fund-abortions/; republished below in full unedited for informational, educational and research purposes:
An Indiana minister who claims to be a pro-life Christian testified against a religious freedom ruling Friday during U.S. Senate hearings on Supreme Court nominee Brett Kavanaugh.
Alicia Baker, a community development organizer and ordained Free Methodist Church minister from Indianapolis, urged the Senate to oppose Kavanaugh’s confirmation because of his decision to grant religious exemptions to the Obamacare HHS mandate.
“If Judge Kavanaugh is confirmed, access to affordable birth control will be in jeopardy,” Baker said. “This committee and the Senate must weigh the harmful impact Judge Kavanaugh would have on the health and well being of so many people.”
In 2015, Kavanaugh sided with Priests for Life in its challenge of the Obamacare HHS mandate while serving on the U.S. Circuit Court of Appeals for the District of Columbia. He said the government should not force religious employers to provide drugs and devices that may cause abortions.
“I concluded that penalizing someone thousands and thousands of dollars for failing to fill out a form because of their religious beliefs was wrong,” Kavanaugh said during the hearing Thursday.
Baker disagreed, arguing that women will suffer if religious organizations are exempted from the pro-abortion mandate.
“Jesus directs us to advocate for a just society that allows people to live their lives to the fullest. Jesus directs us to advocate for a just society that allows people to live their lives to the fullest. In John 10:10, Jesus says, ‘I have come that you might have life, and have it to the full,’” Baker said. “And this means supporting access to affordable birth control, because by permitting individuals to plan if, whether and when to become pregnant, birth control allows us to live our fullest lives.”
In her opening remarks, Baker claimed to be a pro-life Christian. But most employers who challenged the HHS mandate are pro-life Christians who did not want to be forced to provide birth control that may cause abortions. The most well-known HHS challenger, Hobby Lobby, objected to just four forms of birth control that may act as abortifacients, including the IUD and ella; it provided 16 other forms to its employees without objection
Baker said she became involved in the fight right before her wedding when her insurance would not cover her IUD. She said she and her husband decided that, for financial reasons, they would wait a little while before having children. Baker said her doctor recommended an IUD because of previous trouble she had had with hormonal birth control. However, her insurance company would not cover the device – something that Baker said left her “shocked” and caused a lot of stress right up to her wedding.
Her insurance told her it did not cover the device because it can act as an abortifacient, something Baker refused to believe.
However, according to the U.S. Department of Health and Human Services Office of Women’s Health, it does. Its website described the device this way in 2014: “It [sic – If] fertilization does occur, the IUD keeps the fertilized egg from implanting in the lining of the uterus.” A fertilized egg is already a living human being with his/her own unique DNA.
Baker fought her insurance company and eventually joined a lawsuit with the pro-abortion National Women’s Law Center to challenge the Trump administration’s rule expanding religious exemptions under the HHS mandate.
Kavanaugh could hear the lawsuit if he is confirmed and the case comes before the Supreme Court. That worries Baker.
“My faith dictates that I must speak out on behalf of the millions of women who stand to lose access to affordable birth control if Judge Kavanaugh is confirmed,” she said. “As a person of deep faith, I would never impose my religious beliefs on anyone – and no one else should either.”
But women like Baker have not been prevented from accessing birth control, including types that may cause abortions. Baker paid for hers herself, and other women may do so as well if their employers object.
Kavanaugh was correct in siding with religious individuals who the government threatened with heavy fines if they did not comply. Religious freedom is a core part of America, and religious individuals should not be forced to either give up their businesses or pay huge fines simply because they object to paying for something that could cause the death of an innocent unborn child. A Christian pastor should recognize that.
Posted by John at 12:40 PM Links to this post