COMES TO TOWN
DON'T GET IN HIS WAY!

PROMISES TO "WIPE OUT" 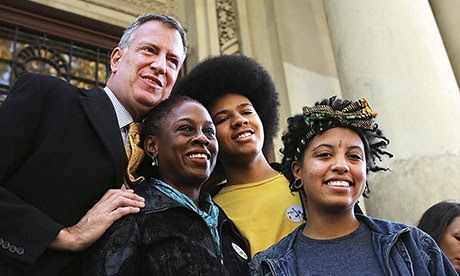 See:
http://freedomoutpost.com/2013/11/mad-marxist-butcher-bill-de-blasio-vows-to-close-nyc-crisis-pregnancy-centers/.
Excerpts:
"New York City mayor elect Bill de Blasio isn't wasting any time in executing his progressive radical agenda in the Big Apple. The unapologetic, radical Marxist, with ties to the communist Nicaraguan Sandinistas, the very same group who allied with the Palestinian Liberation Organization, de Blasio is outing himself as a proponent of Islamic jihad. In only his second day, he is also establishing his murderous intent to do away with pro-life centers, and to give abortionists all the space they need. Bill de Blasio intends to make NYC a leftist, progressive mecca."
"The city has some of the laxest restrictions and the highest abortion rate in the country, with 41 percent of its pregnancies ending in elective termination. According to New York Magazine, 10 percent of all U.S. abortions happen in the state of New York, and seven out of ten abortions in the state take place in New York City.
Bill De Blasio, who was elected Tuesday with 73 percent of the vote, has promised to partner with Planned Parenthood and other abortion providers to help them expand their business in the city. He says he plans to help abortionists find neighborhoods that lack convenient clinic access and provide them with “city sponsored” space to set up shop."

Ask Me About the Sandinistas" (of Nicaragua):

"The New York mayoral candidate still fondly recalls a regime that I fled in terror for my life."

Bill de Blasio in his 1983 NYU yearbook photo, just a few years before his trip to Nicaragua.

Koch knew the Sandinistas were inheritors of the totalitarian mentality:

Bill de Blasio with Katharine Lewis at a 1988 news conference where they announced a supply shipment to Nicaragua.
http://nypost.com/2013/10/03/no-way-de-blasio-missed-sandinistas-anti-semitism/.

America's first openly Marxist big city mayor:
See: http://www.renewamerica.com/columns/kincaid/131106.
Excerpt:
"The New York Post revealed at the last minute that the Marxist frontrunner for mayor of New York City visited Communist Russia in 1983. But the paper's bizarre cover headline, "Back in the USSR," complete with a hammer-and-sickle, seemed to make a mockery of the discovery."

the next NYC mayor's extremist past:

"Admiration for the Nicaraguan Sandinistas":

WILL DEBLASIO WIPE OUT CHRISTIANS AND
OTHER PEOPLE OF FAITH
AND MORALS
WHO STAND IN HIS WAY?
(IT'S WHAT REVOLUTIONARY
TERRORISTS DO!!!)