STOCKHOLM SYNDROME BONDAGE: "NORMALIZING" TERRORISM IN THE U.K.; IF YOU WILL & IF YOU CAN, UNLESS YOU GET KILLED FIRST!

THE U.K. & EUROPE IN STOCKHOLM SYNDROME BONDAGE TO ISIS

Let’s face it. They’re here, they are psychotic, and they aren’t going anywhere. Unfortunately for the sheep living in their plastic bubble of learned helplessness, that has to be the sobering truth taken from the Ariana Grande Manchester bombing claiming the lives of 22 innocents, injuring 60 plus.

But the mockingbird media refuses to change their narrative. Rather, they would have the sheep get used to their own destruction from within.

The Metro Police are actually investigating those who spoke out against the gradually developing narrative of the Manchester attack. Kit Daniels writes "Police have already opened one investigating into Mail Online columnist Katie Hopkins after she said Western men need to “demand action” in response to the terrorist nail bomb attack which targeted children leaving an Ariana Grande concert.

BBC Host: We Must “Get Used” to
Islamic Terror Attacks
Public told to accept helplessness
BY JAMIE WHITE
SEE: https://www.infowars.com/bbc-host-we-must-get-used-to-islamic-terror-attacks/;

Following the Manchester bombing that just rocked the UK, BBC host Katty Kay said that Europeans have to get used to more Islamic terror attacks.
Speaking on MSNBC’s Morning Joe on Tuesday, Kay said that Europeans have no choice but to accept terrorists murdering their children because it’s impossible to get rid of Islamic terrorism.
“Europe is getting used to attacks like this, Mika. They have to, because we are never going to be able to totally wipe this out,” Kay said. “As ISIS gets squeezed in Syria and Iraq, we’re going to see more of these kinds of attacks taking place in Europe and Europe is starting to get used to that.”

Kay then said that nobody is “used to having children targeted,” suggesting that Europeans are more acclimated to adults being killed by terror attacks.
Kay isn’t the only person to tell people to get used to terror attacks rather than offer a solution.

London’s own mayor Sadiq Khan has said that Islamic terror attacks are “part and parcel of living in a big city” following the Manhattan bombing last September.
“That means being vigilant, having a police force that is in touch with communities, it means the security services being ready, but it also means exchanging ideas and best practice,” Khan said.
Interestingly, the 23-year-old terrorist, identified as Salman Abedi, was known to authorities before he committed the attack, reported CBS.
There are over 3,000 potential terrorists that have been monitored in the UK since 2015, including about 400 ISIS-trained fighters that have returned from war zones in Syria and Iraq, according to British security services.
So far, 22 people, including children, were killed and over 50 injured when Abedi blew himself up at an Ariana Grande concert in Manchester, England attended by 21,000 people.
ISIS responded to the attack with a slightly inaccurate statement, saying that a “caliphate soldier managed to place a number of devices among a gathering of crusaders in Manchester, and detonated them,” when only one explosion took place according to officials, indicating that Abedi could be a “lone wolf” jihadist. 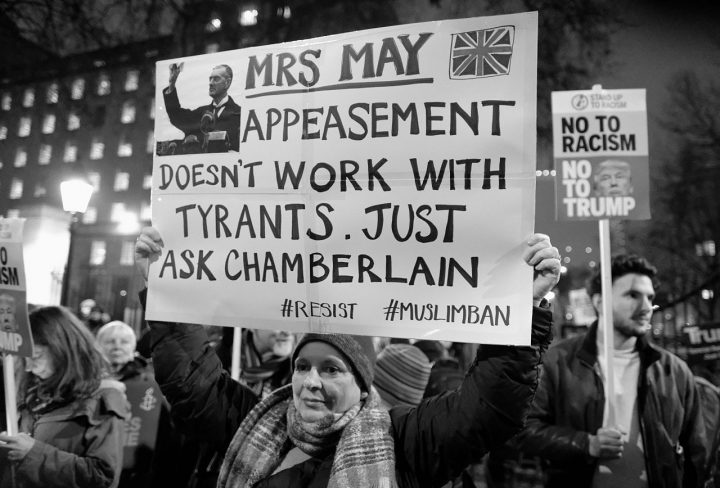 UK’s May vows to “defeat the ideology that often fuels this violence,” while refusing to name what it is
BY ROBERT SPENCER
SEE: https://www.jihadwatch.org/2017/05/uks-may-vows-to-defeat-the-ideology-that-often-fuels-this-violence-while-refusing-to-name-what-it-is;
“The Prime Minister vowed to ‘defeat the ideology that often fuels this violence’, saying: ‘We struggle to comprehend the warped and twisted mind that sees a room packed with young children not as a scene to cherish but as an opportunity for carnage.'”
Ms. May, here is a clue to help you comprehend that kind of warped and twisted mind: “Indeed, Allah has purchased from the believers their lives and their properties, for that they will have Paradise. They fight in the cause of Allah, so they kill and are killed.” (Qur’an 9:111)
You will not, of course, pursue that line of inquiry, because to do so would be “Islamophobic.” And so you will never defeat this ideology, since you refuse even to admit that it exists, much less formulate effective ways to counter it. You will never comprehend these warped and twisted minds, because you refuse to admit that they’re warped and twisted because of religious teachings that you insist are wholly benign.
And so you will be overwhelmingly elected, and you will continue to lead your country to ruin.

“Manchester suicide attacker ‘was known to security services but not thought to pose immediate threat,'” by Justin Davenport, Benedict Moore-Bridger, and Martin Bentham, Evening Standard, May 23, 2017:


…The Prime Minister vowed to “defeat the ideology that often fuels this violence”, saying: “We struggle to comprehend the warped and twisted mind that sees a room packed with young children not as a scene to cherish but as an opportunity for carnage.” …

Political Class Responsible For Manchester Bombing
"Tolerance More Important Now Than
the Basic Right to Life"
Published on May 24, 2017
Paul Joseph Watson tells it like it is concerning the terror attack in his home country and why the 'Political Class' should take full responsibility for it!               The Left Aided Islamic Terror Bombing

Of Manchester Arena
Liberals Using Muslims As Cultural Mercenaries
Published on May 23, 2017
Alex Jones breaks down how the left is using Muslim people, under the guise of liberating them, to push forward their own policies and, most importantly, to destroy any opposition to their will.

Bombing Aftermath: Suicidal Political Correctness Unleashed
Published on May 24, 2017
From suggesting that it wasn’t an Islamic terror attack but a “right wing false flag”, to the all familiar “get used to it” and “don’t criticize them, it will only make them mad” — David Knight looks at the reactions of the press and the police who threaten those who say something with hate speech investigations. Meanwhile, ISIS is in the Philippines and its all out war while western press remains silent.
Islam Is Designed To Subjugate Women
Manchester Attack: What They’re NOT Telling You
Posted by John at 9:50 AM Links to this post