Posted by John at 4:12 PM Links to this post 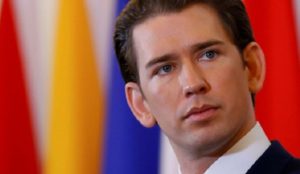 BERLIN – Austria’s government is closing seven mosques and plans to expel imams in a crackdown on “political Islam” and foreign financing of mosques.
Chancellor Sebastian Kurz said Friday that the government is shutting a hardline Turkish nationalist mosque in Vienna and dissolving a group called the Arab Religious Community that runs six mosques.
The actions by the government were based on a 2015 law that, among other things, prevents religious communities from getting funding from abroad. Interior Minister Herbert Kickl said the residence permits of around 40 imams employed by ATIB, which oversees Turkish mosques in Austria, are being reviewed.
Kickl said that, in two cases, permits have already been revoked. Five more imams were denied first-time permits….

Posted by John at 3:53 PM Links to this post

Posted by John at 3:47 PM Links to this post


CROWD CHASES POLICE THROUGH STREETS
MORE:
THE HORSES BROUGHT IN

Police tactics at Robinson demo
Breaking Through the Police Barriers:

Posted by John at 2:57 PM Links to this post