CHURCH PROTESTED, VANDALIZED OVER SIGN ABOUT HOMOSEXUALITY, TRANSGENDERISM THAT DECLARES: "THE CULTURE MAY CHANGE, THE BIBLE DOES NOT"~PASTOR OUSTED BY OWN CONGREGATION 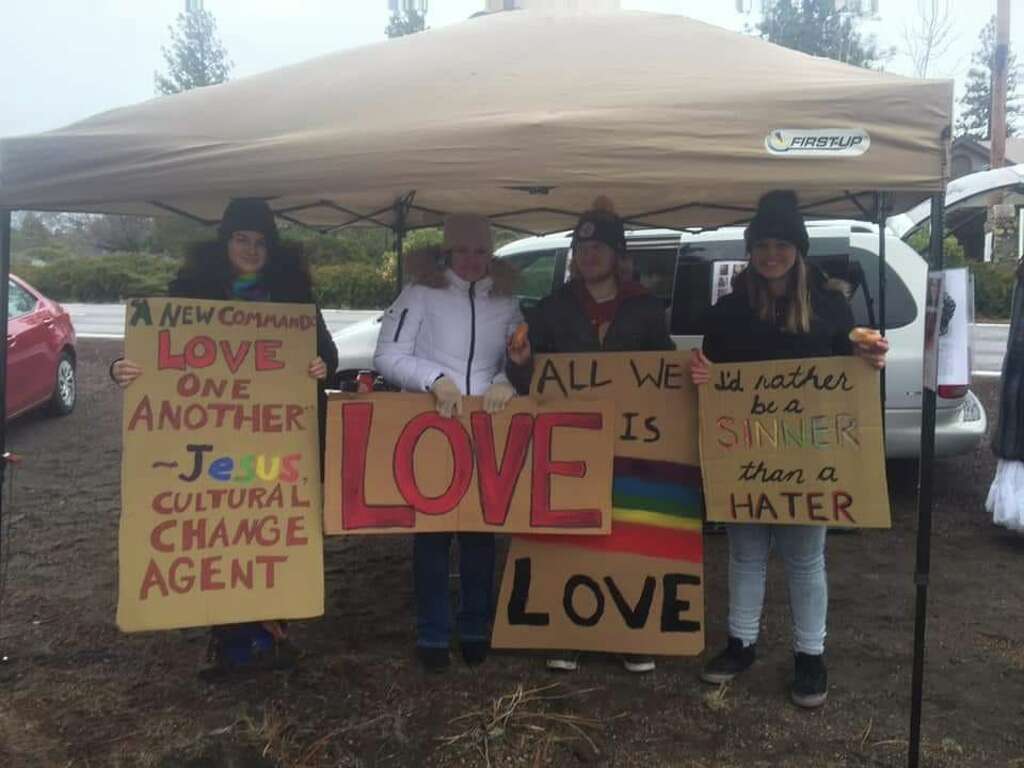 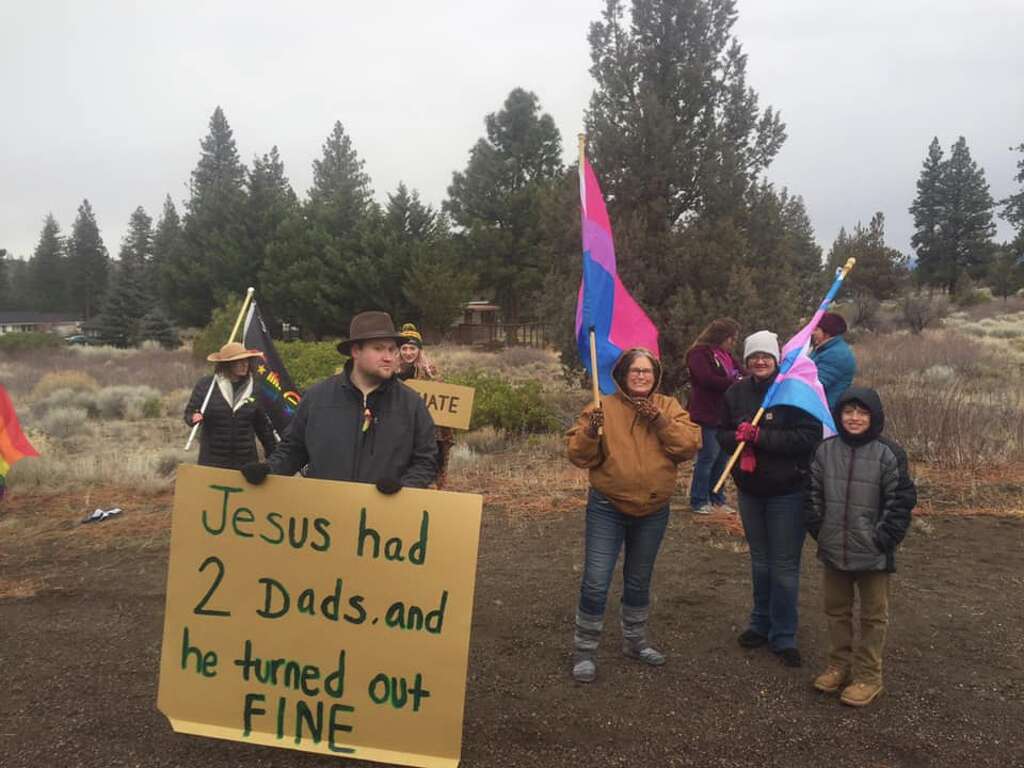 January 9 at 10:26 AM ·
I woke this morning to find that our sign had been vandalized. They broke not only the plexiglas and stole some of the Letters, they also busted the power box. I have not seen it up close yet as this picture was sent to me by a member of our congregation. Please pray that God would provide.
CHURCH PROTESTED, VANDALIZED OVER SIGN ABOUT HOMOSEXUALITY, TRANSGENDERISM THAT DECLARES: "THE CULTURE MAY CHANGE, THE BIBLE DOES NOT"
BY HEATHER CLARK
SEE: https://christiannews.net/2019/01/12/church-protested-over-sign-about-homosexuality-transgenderism-that-declares-the-culture-may-change-the-bible-does-not/;
LAKE SHASTINA, Calif. — A church in California has been subject to protests and vandalism after members of the community became offended by a message on its sign that reads, “Bruce Jenner is still a man. Homosexuality is still sin. The culture may change, the Bible does not.”
“We believe love warns, and the best expression of love is to be willing to be hated so that others might have the chance to hear truth,” Justin Hoke, the pastor of Trinity Bible Presbyterian Church, told The Siskiyou Daily News.
“If you see a burning building, there are only two reasons not to warn those inside: if you think the danger isn’t too great, or if you don’t love those inside,” he said.
According to Yahoo Lifestyle, three local mothers organized a protest against Hoke’s church, known as the “Shastina Love Rally,” to express objection to the sign after seeing it on Facebook. Organizer Amelia Mallory told the outlet that she is using the event to provide a counter message of support for those who identify as homosexual or transgender.
“What’s important to us is that we raise our voices, use our bodies, signs, art and expression to balance out the message on the sign and try to promote inclusion and tolerance,” she stated. “Rallying together in support of each other and of the queer community as a whole.”
A protest was held last Sunday, with another scheduled for tomorrow. A photo on the event’s Facebook page shows signs that read “I’d rather be a sinner than a hater” and “A new command, love one another: Jesus, cultural change agent.”
Hoke says that he is being loving by telling people the truth, and that God’s people should not stop calling sin exactly what it is, for it follows the Biblical command to call men to repentance.
“We believe that Jesus commands all Christians to let their light shine. We also believe that salvation is only for sinners. Jesus said he came to call sinners, not the righteous,” he outlined. “If we give in to cultural demands to stop calling sin ‘sin,’ then we are robbing people of opportunity to hear the truth.”
Hoke lamented that some professed churches instead “call good what the Bible calls evil” (Isaiah 5:20).
The Siskiyou Daily News reports that this past week, a yet-unidentified person—or persons—vandalized the sign, breaking the plexiglass, mixing up a number of the letters, and damaging the power supply that lights up the sign.
Mallory says that a donation will be received for Hoke tomorrow during the protest/rally, but she also remarked that she hopes Hoke will consider their generosity “before posting another similar message.”

Jesus said in John 3:19-21, “And this is the condemnation, that light is come into the world, and men loved darkness rather than light, because their deeds were evil. For every one that doeth evil hateth the light, neither cometh to the light, lest his deeds should be reproved. But he that doeth truth cometh to the light, that his deeds may be made manifest, that they are wrought in God.”
He also declared in John 8, “Verily, verily, I say unto you, whosoever committeth sin is the servant of sin. …. [But] if the Son therefore shall make you free, ye shall be free indeed.”
Jesus taught that men must be born again, or they cannot see the Kingdom of Heaven (John 3:3). Scripture further outlines that as all men are born in Adam and have a sin nature with inherent inclinations that are contrary to the law of God—which none can throw off by their own power—men must be regenerated by the Spirit of God and take on the new nature in the likeness of the Second Adam, Christ Jesus, “which after God is created in righteousness and true holiness” (Ephesians 4:24).
“Can any change his own heart? No! The thing is impossible. We can no more quicken and impart life to our souls than we can to our bodies; we can no more rise and become new men in our own strength than wash away sins by our own performances. It is impossible!” declared the late preacher J.C. Ryle in his sermon “Regeneration.” “The natural man is as helpless as Lazarus was when he lay still and cold and motionless in the tomb. We may remove the stone, as it were, and expose the sad work of death—but we can do no more.”
“There must be a power far mightier than any power of earth in exercise before the natural man can awake and arise and come forth as a new creature. And to do all this is the special office of the Spirit of Christ, the Holy Spirit, whom Jesus promised to send. It is He who quickens; it is He who gives life.”
_______________________________________________________________

JUST HOW MANY MUSLIMS WON POLITICAL OFFICE IN 2018?

JUST HOW MANY MUSLIMS WON POLITICAL OFFICE
IN 2018?
SEE: http://the-trumpet-online.com/just-many-muslims-won-political-office-2018/;
The Numbers May Surprise You !!!!
Tim Brown     NOVEMBER 27, 2018
https://freedomoutpost.com/just-how-many-muslims-won-political-office-in-2018-the-numbers-may-surprise-you/
Many of you are familiar with a couple of congressional seats that were picked up by Muslim women and the first Muslim state attorney general put into office in Minnesota.  What you may not realize is just how many political offices were filled by electing Muslims in 2018.  Even more concerning is the high percentage of Muslims voting and their openness to promote the fact that they want to “change” our culture and society.
First, the information comes from JETPAC, which stands for  Justice  Education  Technology Political  Advocacy  Center.  According to their Mission Statement: JETPAC seeks to build a strong American Muslim political infrastructure and increase our community’s influence and engagement. We will  take our place at the table across all levels of government. Our philosophy of change is rooted in a community-based approach, grassroots mobilization, civics training, and technology application. We have developed our own training curriculum, as well as proprietary social media technology and automation tools, to give our Fellows the skills and resources they need to win elections.

If you DON’T think they have an agenda to conform America to Islam, you really do need to pull your head out of the sand.

Posted by John at 2:27 PM Links to this post