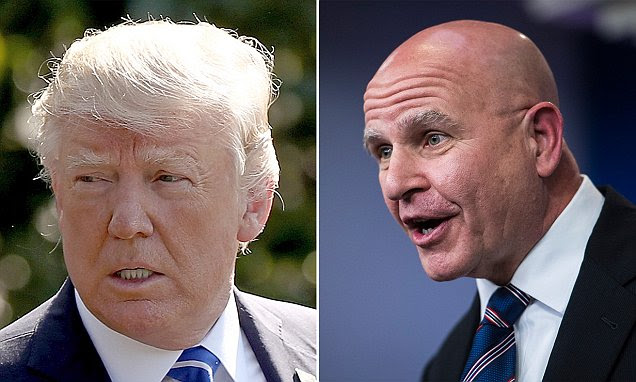 GLOBALIST MCMASTER LABELED TRUMP
"SCARY, A DOPE"
“I see my mission as preventing him from
blowing up the globe”
BY PAUL JOSEPH WATSON
SEE: https://www.infowars.com/report-mcmaster-labeled-trump-scary-a-dope/;
National Security Advisor General H.R. McMaster labeled President Donald Trump “a dope,” said it was “scary” that he had the nuclear football and vowed to stop him from “blowing up the globe”.
That’s according to long time Trump confidante Roger Stone, who said the remarks were made when McMaster was attempting to recruit Oracle CEO Safra Catz to chair the president’s Intelligence Advisory Board.
“Catz and McMaster were having dinner at a public restaurant….McMaster became inebriated but during that time he took a call from the president,” Stone told the Alex Jones Show, adding that when McMaster returned to the table “he had nothing but disparaging things to say about his boss.”

Stone then read out what he said was a direct quote from McMaster.
“The president is a dope, he is incapable of understanding anything beyond 140 characters – the idea of this guy having the nuclear football is scary – I see my mission as preventing him from blowing up the globe.”
Stone claims that Catz was offended by the comments and repeated them to business magnate and close personal friend of Trump, Sheldon Adelson.
Friends of Adelson attempted to give the story to the New York Post in “an attempt to expose the disloyalty of McMaster,” according to Stone, but Jared Kushner called Rupert Murdoch and the story was spiked.
Catz is refusing to talk to reporters about the story but is willing to talk to the president if he asks he about it, according to Stone, who called the story a “stunning example of McMaster’s disloyalty.”
Stone also revealed that Trump’s personal bodyguard Keith Schiller was forced out of the White House by General John Kelly and that Trump’s safety may now be at risk.
Previous reports confirmed that Trump was “crushed” when Schiller left last week and that the main reason for his departure was because he was “frustrated with John Kelly‘s efforts to enforce discipline within the Trump Administration.”
According to Roger Stone, Schiller, who was the last person Trump spoke to at night and the first person he spoke to in the morning.
“It can now be fully revealed that Schiller clashed with General Kelly over his own access to the president, that Kelly demanded Schiller could not see or communicate with the president without his prior express approval,” said Stone, adding that Schiller was also asked to file a written report to tell Kelly what was discussed.
“Ultimately, Kelly threatened to resign as the White House chief of staff if Schiller stayed and being the consummate professional, Schiller has withdrawn,” added Stone, warning that the president’s physical safety is now at risk with Schiller gone.
“The fact that he is leaving is extremely ominous,” said Stone, noting that Kelly’s mission is to cut off any pipeline of information to the president that he does not control.
Stone also speculated that Trump could now even be at risk of being drugged and that globalists are still intent on removing him from the presidency.

Posted by John at 4:06 PM Links to this post 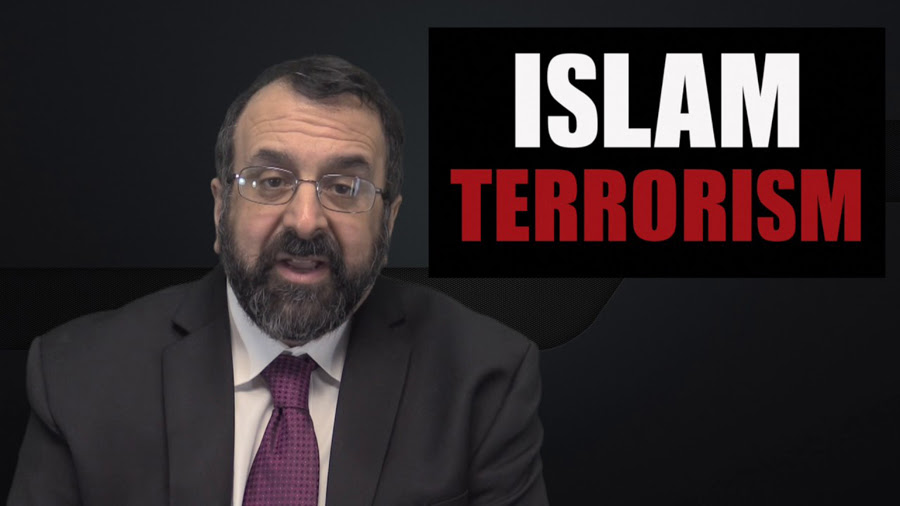 ROBERT SPENCER'S JIHAD WATCH PERSECUTED BY PAYPAL, GOOGLE & FACEBOOK FOR PRESENTING ISLAMIC TERRORIST FACTS
CENSORSHIP HAPPENING ACROSS SOCIAL MEDIA
Alex Jones talks with Robert Spencer of Jihad Watch about how they are being censored across many social media platforms.
Posted by John at 3:54 PM Links to this post

BITTER, RACIST HILLARY CLINTON:
TRUMP WON BECAUSE HE COMFORTED
"MILLIONS OF WHITE PEOPLE"
Stands by ‘deplorables’ comment;
Labels Trump’s inauguration speech as
‘cry from the white nationalist gut’
BY STEVE WATSON
SEE: https://www.infowars.com/bitter-hillary-trump-won-because-he-comforted-millions-of-white-people/;
In an interview to promoter her book about losing the election to Donald Trump, Hillary Clinton claimed that she lost because Trump ran a campaign of nostalgia and it was a ‘comfort’ to ‘millions of white people’.
“He was quite successful in referencing the nostalgia that would give hope, comfort, settle grievances, for millions of people who were upset about gains that were made by others,” Clinton stated during the CBS interview, aired Sunday.
“What you’re saying is millions of white people,” interviewer Jane Pauley stated.
“Millions of white people,” Clinton confirmed. “Yeah, millions of white people.”

Clinton also blamed ‘sexism and misogyny’ for her loss, and claimed that a majority of Americans felt ‘we really don’t want a woman commander in chief’.
At no point did Clinton admit that it was her own scandal ridden history that could have contributed to her loss.
Hillary was also asked about her infamous ‘deplorables’ comment, to which she revealed she actually still stands by:

Clinton said that she believed ‘Trump’s behavior was deplorable’ and that a “large number of people” who supported him didn’t care.
Hillary refused to accept that she ‘energized’ Trump supporters by calling them deplorable, claiming instead ‘they were already energized’. She also refused to accept that she offended anyone by labeling them in such a way.
Hillary also labeled Trump’s inauguration speech as a ‘cry from the white nationalist gut’.

Elsewhere during the interview, Clinton revealed that she was so confident that she would be President that she bought a second house, worth $1.16 million, next to her residence in Chappaqua, New York, so her staff would be able to stay there during retreats.
“I thought I was going to win,” Hillary said.
Hillary didn’t win, she lost, and now she says she will never run for office again:

President Donald Trump commemorates the 9/11 anniversary
with a speech at the Pentagon 🇺🇸 September 11, 2017
TRUMP, PENCE, MATTIS, SESSIONS FAIL TO NAME "ISLAMIC TERRORISM" IN 9/11 REMARKS
BY ROBERT SPENCER
SEE: https://www.jihadwatch.org/2017/09/trump-pence-mattis-sessions-fail-name-islamic-terrorism-911-remarks;
The Trump administration: now digitally McMastered.
“Instead of naming the enemy, Trump seemingly went out of his way to use other descriptors in his speech, including ‘terrorists who attacked us,’ ‘barbaric forces of evil and destruction,’ ‘horrible, horrible enemies,’ ‘enemies of all civilized people,’ and ‘enemies like we’ve never seen before.'”
That’s great, Mr. President, but you will find it impossible to defeat these horrible, horrible enemies without identifying and working to devise ways to confront their motivating ideology. That’s what you seemed to be promising to do when you rebuked Obama and Hillary Clinton for not daring to say “radical Islamic terrorism.” Now you have joined them. You were right the first time.


NEW YORK — On the sixteenth anniversary of the September 11, 2001, Islamic terrorist attacks, President Donald Trump did not once mention the terms “radical Islam” or “Islamic terrorism” during a commemoration ceremony at the Pentagon.
Those phrases were also not mentioned in speeches today by other Trump administration senior officials, including Vice President Mike Pence, Defense Secretary James Mattis, and Attorney General Jeff Sessions.
Instead of naming the enemy, Trump seemingly went out of his way to use other descriptors in his speech, including “terrorists who attacked us,” “barbaric forces of evil and destruction,” “horrible, horrible enemies,” “enemies of all civilized people,” and “enemies like we’ve never seen before.”
Similarly, Pence, speaking at the Flight 93 National Memorial in Shanksville, Pennsylvania, referred to the scourge as “evil terrorists” and “global terrorism.” Pence did mention “the barbarians known as ISIS,” calling the global jihadist group by its acronym instead of the Islamic State.
Mattis, addressing the same Pentagon memorial as Trump, outwardly minimized the Islamic motivations of the terrorists by calling them “maniacs disguised in false religious garb.” He referred to “attackers perpetrating murder” on that fateful day, not even using the words “terrorist” or “terrorism.”
Sessions perhaps came closest to prescribing a religious ideology, calling out “extremists” who “seek to impose their speech codes, their religion, their theocracy.”
“For these extremists, it’s more than religion; it’s ideology,” he stated. “We have no choice but to defend against it.”
But Sessions did not mention a specific religion and did not expound upon which ideology the terrorists maintain.
When speaking of common threads among terrorists, Sessions also failed to mention the one major thread of Islam when he stated:


While the threats we face are diverse and evolving, terrorist ideologies have one thing in common: their disregard for the dignity of human life and they share an obsession with forcing everyone into their twisted ideology. And the terrorists know they can’t persuade people using reason, so they use coercion and intimidation. They seek acquiescence and inaction.

Acting Department of Homeland Security Secretary Elaine Duke released a brief statement that referred to the 9/11 radical Islamic jihadist perpetrators as “terrorists.”
Trump’s reluctance to name the actual enemy contrasts with speeches he gave in the past, including during the 2016 presidential campaign, in which he repeatedly utilized the phrase “radical Islamic terrorism.”
“America was under attack,” stated Trump at Monday’s Pentagon memorial, a passive tone that did not specify who the attackers were.
“Today, our entire nation grieves with you and with every family of those 2,977 innocent souls who were murdered by terrorists 16 years ago,” he stated.
“The terrorists who attacked us thought they could incite fear and weaken our spirit. But America cannot be intimidated, and those who try will soon join the long list of vanquished enemies who dared to test our mettle.”
Trump went on to use various other terms to describe the enemy:


In the years after September 11, more than five million young men and women have joined the ranks of our great military to defend our country against barbaric forces of evil and destruction. American forces are relentlessly pursuing and destroying the enemies of all civilized people, ensuring — and these are horrible, horrible enemies, enemies like we’ve never seen before — but we’re ensuring they never again have a safe haven to launch attacks against our country. We are making plain to these savage killers that there is no dark corner beyond our reach, no sanctuary beyond our grasp, and nowhere to hide anywhere on this very large earth.
…
So here at this memorial, with hearts both sad and determined, we honor every hero who keeps us safe and free, and we pledge to work together, to fight together, and to overcome together every enemy and obstacle that’s ever in our path.

Pence did quote a previous statement from Trump about terrorists’ “radical ideology” but, like the other administration officials speaking, did not say what that ideology was:


But under the leadership of President Donald Trump, as our commander-in-chief, our armed forces have ISIS on the run in Iraq and Syria, and we will not rest or relent until we hunt down and destroy them at their source. Some four weeks ago, President Trump expressed the full commitment of the United States to, in his words, “destroy terrorist organizations and the radical ideology that drives them.

The uniform lack of the mention of radical Islamic terrorism from the administration Monday comes after previous reports that H.R. McMaster, Trump’s embattled national security adviser, has petitioned against using the phrase.
In February, CNN cited a source inside a National Security Council meeting quoting McMaster as saying that use of the phrase “radical Islamic terrorism” is unhelpful in working with allies to fight terrorism.
In May, McMaster spoke on ABC’s This Week about whether Trump would use the phrase “radical Islamic terrorism” in a speech that the president was about to give in Saudi Arabia. “The president will call it whatever he wants to call it,” McMaster said. “But I think it’s important that, whatever we call it, we recognize that [extremists] are not religious people. And, in fact, these enemies of all civilizations, what they want to do is to cloak their criminal behavior under this false idea of some kind of religious war.”…