Rider would have ended settlement payments from going to groups such as La Raza, National Urban League
BY Joe Schoffstall
SEE: http://freebeacon.com/issues/omnibus-omits-justice-department-slush-fund-rider-ending-payments-to-liberal-groups/;
Posted by John at 4:14 PM Links to this post

GELLER SUED THE NEW YORK CITY "MTA" TO PROTECT HER RIGHT TO FREE SPEECH;
POSTERS THEN ALLOWED IN SUBWAYS & ON BUSES

OBAMA REFUSES TO LOOK AT SOCIAL MEDIA
TO FERRET OUT TERRORISTS
DHS HOWEVER IS MONITORING SOCIAL MEDIA
FOR CRITICIZING OBAMA
GELLER: "ISLAM ASSERTS ITS AUTHORITY OVER NON MUSLIMS (INFIDELS)

Pamela Geller to Attorney General
Loretta Lynch: "Come and Get Me Byatch!"
"We'll Be Cell Mates"

Pamela Geller Jihad In Boston, Jihad In America, Stop The Jihad 4/20/13
"In America, They Assassinate Your Character" First


FOX Host Pleads With Pamela Geller to Respect Islam & Constrain Herself; Even Donald Trump & Catholic Bill Donahue Object To Her Supposedly Inciting Islamofascists
Geller: "I Will Not Abridge My Free Speech"

Pamela Geller - Free Speech Under Assault
Published on May 7, 2015
Pamela Geller, organizer of the draw Mohammad event in Texas, schools CNN’s Alisyn Camerota on the principles of free speech.http://www.LibertyPen.com

Posted by John at 9:41 AM Links to this post


JEB BUSH: WOULD HAVE KILLED BABY HITLER~BUT NO MENTION OF HIS GRANDFATHER SUPPORTING THE NAZIS

JEB BUSH: KILLING BABY HITLER;
BUT NO MENTION OF HIS GRANDFATHER
SUPPORTING THE NAZIS
BY KURT NIMMO
SEE: http://www.infowars.com/jeb-bush-killing-baby-hitler/;
republished below in full unedited for informational, educational, and research purposes:

Jeb Bush, the Republican presidential candidate who is in the single digits, told The Huffington Post he would kill a baby Hitler if given the chance to go back in time.

“Hell yeah, I would!” the former Florida governor said while on the campaign trail in New Hampshire. “You gotta step up, man.”
“It could have a dangerous effect on everything else, but I’d do it — I mean, Hitler,” Bush added.
The question was posed by The New York Times Magazine. Most respondents said they would kill the baby who would grow up to become Der Fuhrer.
If given the chance, Jeb Bush might want to travel back in time and prevent his grandfather from helping Hitler become one of the most infamous dictators of the 20th century.
Prescott Bush, a Wall Street executive banker and Connecticut Senator, helped assist the Nazis through the Union Banking Corporation (https://en.wikipedia.org/wiki/Union_Banking_Corporation) and Brown Brothers Harriman, an influential investment bank.
The bank held gold for the Nazis and acted as a clearing house for Fritz Thyssen, a German industrialist who supported the Nazi regime. In 1932 Thyssen and other industrialists signed a letter urging Paul von Hindenburg to appoint Adolf Hitler as chancellor. He also arranged a meeting of the Association of German Industrialists that raised 3 million marks for the Nazi Party. Thyssen was instrumental in Hitler’s effort to re-arm Germany. In 1941 Thyssen wrote a book titled “I Paid Hitler.”
Jeb Bush’s grandfather was also linked to Consolidated Silesian Steel Company, a company that used slave labor during the Second World War.
Prescott Bush was not deterred by the outbreak of the Second World War. It took the Trading with the Enemy Act and a seizure of the bank’s assets in 1942 to stop it from dealing with Thyssen and the Nazis.
If Jeb Bush found a way to travel back in time, he also might want to prevent J.P. Morgan, T. W. Lamont, the Rockefeller interests, General Electric Company, Standard Oil, National City Bank, Chase and Manhattan banks, Kuhn, Loeb and Company, and dozens of others from the financial and corporate elite supporting Hitler and the Nazis.
___________________________________________________________

Posted by John at 8:33 AM Links to this post

OBAMA PLAYS ON IGNORANCE OF HISTORY; IMMIGRATION LAWS BE DAMNED
HE WANTS US TO REMEMBER OUR MISTREATMENT
OF THE "ENEMIES OF AMERICA" IN THE 1940s?
OBAMA CONFLATES SYRIAN REFUGEES WITH REJECTION
OF JEWISH REFUGEES BEFORE WORLD WAR TWO
SHOULD WE FEEL GUILTY FOR U.S. DETENTION CAMPS FOR JAPANESE, AND OUR BOMBING OF JAPAN & GERMANY?
"REPEATING THE MISTAKES OF THE PAST"???
LETTING THIS MUSLIM JIHADIST INTO AMERICA, & ELECTING HIM TWICE
WAS OUR WORST MISTAKE

Morally perverted analogy between WW2 fleeing Nazis and Syrian refugees
JEWS WERE NOT COMING TO AMERICA
TO KILL AMERICANS
Published on Nov 20, 2015
9 reasons why comparing WW2 Jewish refugees and today's Muslim Syrian refugees is a specious and reprehensible analogy.
The latest from the delusional, suicidal or just plain stupid left is that refusing to take Syrian refugees is the same as refusal to save Jews from Hitler in WW2. And when Obama whines "we don't want to take in widows and children", we know 80% are fighting age males and he (Obama) just doesn't want his grand jihad schemes thwarted or limited.
Why Syrian refugees NOT = to Jewish refugees WW2
a. Jews were not a terror threat; there is evidence terrorists are hiding among Syrian refugees. FBI says we cannot vet them. Obama’s own DHS Secretary Jeh Johnson actually said “we don’t know a whole lot” about Syrian refugees coming into America, and that DHS has “no active protocol” for properly screening them. Paris killers came as “refuges” http://www.newsmax.com/Headline/franc...
b. Jews were singled out for persecution by the Nazis, not (initially) fleeing an ongoing war.
c. Jews had nowhere to go; Syrian refugees should have many places to go.
d. Opposition to Jewish refugees was “racial”; opposition to Syrian refugees is based on security concerns.
e. Many of the Syrian “refugees” are neither Syrian, nor refugees.
f. The Jewish refugees had communities willing and able to resettle them; the Syrian refugees may not
See full article here about above from Breitbart http://strongandresolute.blogspot.com...
additionally:
g. Obama has already admitted a million + Muslims under the radar to USA, 25% of whom support violent jihad.http://strongandresolute.blogspot.com...
h. Islamic goal is conquest by invasion this way principle of Islam, Hiraj, conquest by invasion.
i. Why does Obama want this? Obama is not asleep. He is not delusional or stupid or naive. His father was Muslim. He was educated in Indonesian Muslim schools. Rev Wright says Obama asked him to become Christian for show and not give up Islam. Why would anyone come up with any explanation for Obama other than the obvious? He is a pro Islamic jihadist. Here are 250 examples:
http://strongandresolute.blogspot.com...
+ 80% Moslems vote Democratic
+Bill and Hillary have take HUGE $ from Jihadist nations.

NOT THE ONLY PERVERTER OF HISTORY

Durbin Exploits Holocaust, Jewish Refugees & Others;
Calls For Importation Of Syrians; 10-1-2015
Published on Oct 1, 2015
Democratic Senator Dick Durbin exploits the story of the SS St. Louis - a vessel carrying Jewish refugees from Nazi persecution sent back to Europe - to push the agenda of President Barack Hussein Obama to import at least twenty thousand "refugees" from Syria. 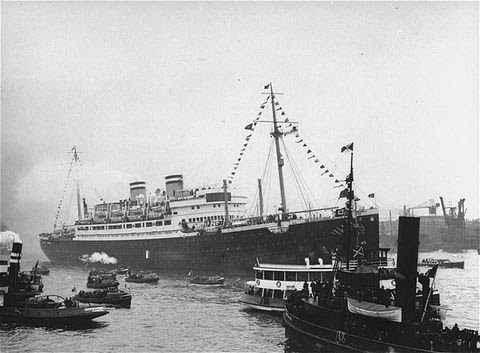 BY STEVE BYAS
SEE: http://www.thenewamerican.com/usnews/immigration/item/22153-obama-to-new-u-s-citizens-syrian-refugees-like-jewish-refugees-of-wwii; republished below in full unedited for informational, educational, and research purposes:

Posted by John at 7:52 AM Links to this post