30,000 BABIES ABORTED IN PENNSYLVANIA IN 2017; MOST ABORTIVE MOTHERS UNWED

30,000 BABIES ABORTED IN PENNSYLVANIA IN 2017; MOST ABORTIVE MOTHERS UNWED
BY HEATHER CLARK
SEE: https://christiannews.net/2018/12/31/30000-babies-aborted-in-pennsylvania-in-2017-most-abortive-mothers-unwed/;
According to the report, over 87 percent of those who aborted their child last year were unmarried, or 26,310 women. Nearly 39 percent of those women were age 24 or younger.
Most of the abortions—83.6 percent—were performed in five counties in the Commonwealth: Philadelphia, Allegheny, Dauphin, Delaware and Northampton.
A chart based on residency shows that the least number of abortions were performed on women from Bradford, Sullivan, Fulton, Susquehanna, Tioga, Cameron and Forest counties, which had five or fewer abortions listed.
143 women experienced complications from their abortion, with the most common complication being “retained products of conception,” meaning that parts of (or all of) the dead baby had been left inside of the woman. 102 of the 143 women were listed under this complication.
48 complications were from pill-based abortions, and 33 were suction curettage abortions, the latter of which rips the baby from the womb via vacuum-like pressure.
Suction curettage was the most commonly used abortion method overall, with 16,879 babies dying by the surgical procedure, and 11,496 babies being killed by the abortion pill. 1,627 babies died by dilation and evacuation, also known as dismemberment abortion.
Over 18,000 of the babies were eight weeks gestation or less, and over 1,000 babies were between 18-23 weeks gestation, or four and a half to nearly six months gestation.
More than half—52.8 percent—of the mothers had never obtained an abortion before, while 7,786 women had previously aborted a child and 3,776 obtained their third abortion. 1,082 mothers had aborted four or more of their children before their 2017 abortion.
“[A]bortion totals in Pennsylvania would be much higher were it not for the caring pregnancy resource centers administered by Real Alternatives and other groups,” Maria Gallagher, legislative director for the Pennsylvania Pro-Life Federation, remarked to the Daily Local News. “These life-affirming organizations provide everything from diapers to daycare referrals, along with comprehensive counseling to pregnant women.”
Read the report in full here.
As previously reported, Pennsylvania had been an influential state in American history in the fight against abortion. In 1850, Pennsylvania’s Supreme Court became the first high court in the nation to declare that abortion must be prohibited at any stage of gestation for any reason.
While other state courts allowed preborn babies to be aborted up to four months of gestation by reason of a “quickening” theory, which stated that a person was not protected until the mother felt them kicking in the womb, the Pennsylvania Supreme Court would accept no such argument.
In Mills v. Commonwealth, the court declared that the theory “is not … the law in Pennsylvania, and ought never to have been the law anywhere.” The ruling became a strong precedent that other state courts began to review and follow.
By the 1900’s, due to the influence of the Pennsylvania Supreme Court, nearly every state in the nation prohibited abortion for any reason, with the exception of Arkansas, Mississippi and North Carolina.

Posted by John at 1:54 PM Links to this post

ECUMENICAL APOSTASY: BAPTISTS JOIN WITH POPE FOR THE SAKE OF "CHRISTIAN UNITY"

ECUMENICAL APOSTASY
BAPTISTS JOIN WITH POPE FOR THE SAKE OF "CHRISTIAN UNITY"
SEE: https://pulpitandpen.org/2018/12/28/baptists-join-with-pope-for-the-sake-of-christian-unity/;
[Ethics Daily] The second meeting of the third phase of international ecumenical conversations between the Baptist World Alliance (BWA) and the Pontifical Council for Promoting Christian Unity took place Dec. 10-14 in Rome at the Domus Internationalis Paulus VI.
The Baptist delegation was led by co-chair Frank Rees, associate professor and chair of the academic board at the University of Divinity in Australia; the Catholic delegation was led by co-chair Bishop Arthur Serratelli, bishop of Paterson, New Jersey.
The meeting took up the theme of the “Context of Common Witness.” This discussion reflected on the global cultural context in which common Christian witness is being conducted today in six continents of the world.
This sub-theme helps to illuminate the overall theme of the third phase of dialogue, “The Dynamic of the Gospel and the Witness of the Church.” The Baptist-Catholic group will meet annually through 2021 for this third phase of conversations.
Included in the week of ecumenical conversations was a meeting with Pope Francis during the general papal audience on Dec. 12. The following day, the participants visited a local Baptist church in Trastevere.
The Baptist-Catholic group will convene for its third round of the current phase of conversations on Dec. 9-13, 2019, in Warsaw, Poland, hosted by the Baptist Union of Poland at the Baptist Theological Seminary in Warsaw.
To continue reading, click here.
[Editor’s Note: This article was written by Steven Harmon and Avelino Gonzalez-Ferrer and first posted at Ethics Daily. This HT is not an endorsement of Ethics Daily]

Posted by John at 1:18 PM Links to this post 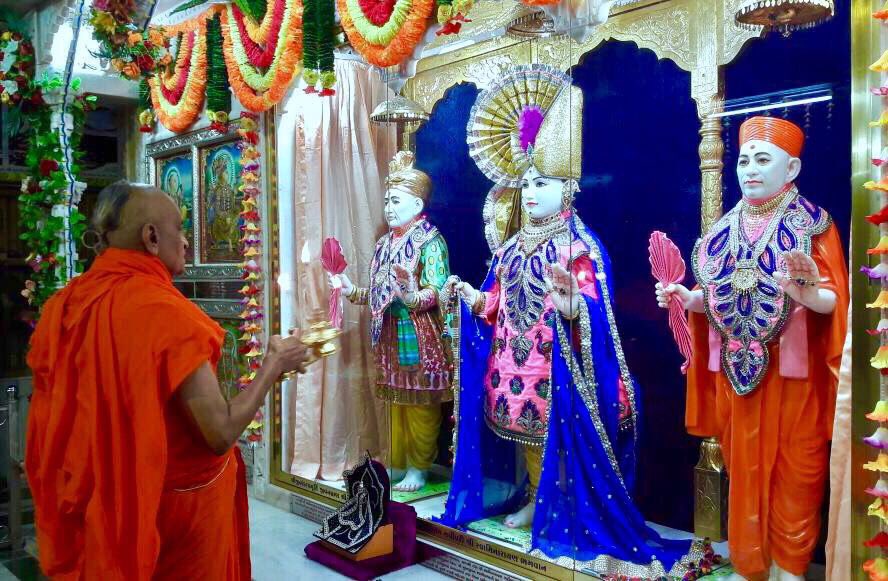 FAILING CHRISTIAN CHURCHES CONVERTING TO PAGAN HINDU TEMPLES
BY RICHARD HAAS
SEE: https://pulpitandpen.org/2018/12/30/failing-christian-churches-converting-to-pagan-hindu-temples/;
Recently, the Times of India reported that the Ahmedabad-based cult, Swaminarayan Gadi Sansthan has bought a 30-year-old church in Portsmouth, Virginia with plans to convert it into a Swaminarayan temple of pagan worship. The Portsmouth church is not the first to be converted into a Hindu center of pagan idolatry. This seems to be the start of a troublesome trend among failing churches in the United States.
This latest conversion of the Portsmouth church is only one of five other recent conversions from a Christian church to a pagan temple here in the United States by the Hindu cult Swaminarayan Sansthan. Other converted churches are in California, Louisville, Pennsylvania, Los Angeles, and Ohio. This troubling trend is not limited to only here in the United States; it is happening abroad as well.  Swaminarayan Gadi Sansthan has converted other churches internationally, one in London and another near Bolton in Manchester UK.  Additionally the group is working on an acquisition of a church in Toronto, Canada.
There is an ever-growing number of pagan Hindu worshipers in the United States. For example, Virginia has a population of more than 10,000 Gujaratis. While we as Christians should be alarmed at the conversion of churches to pagan Hindu worship centers, we need to remember that this can present an opportunity to reach the lost. This prospect of hope comes in Christ and readily provides a mission field to preach the Gospel to those lost in the pagan cult of Hinduism.
While the field is ripe for the harvest the question has to be asked, why are these supposed “Christian” churches selling their buildings to pagan entities? Where are these churches Christian ethics and morals? While yes, a church may be failing, does that make it right for a church to sell to just anyone who offers the right amount of money? No, churches should not be selling to anyone who is willing to buy. Just because your churched failed and you need to sell does not mean you forsake your moral and spiritual commitment to the body of Christ at large or your duty to honor God.
These churches that are selling to this pagan Hindu cult are inviting the devil into there backyard to play and shake hands with their community. Even in selling, these churches owe it to the community, the body of believers, and above all to Christ to do the right thing and not sell to groups or businesses that openly are against Christianity.
______________________________________________________________
SEE:
https://satyavijayi.com/virginia-church-all-set-to-be-transformed-into-a-hindu-temple/
EXCERPTS:
It is the sixth church in the US and the ninth across the world to be turned into a Swaminarayan temple by Swaminarayan Gadi Sansthan based in Maninagar, Ahmedabad.
Apart from Virginia, churches in California, Luiseville, Pennsylvania, Los Angeles and Ohio in the US have been transformed into temples by the sect. Similarly in the UK, two churches have been coverted into temples in London and Bolton near Manchester. The sect has also acquired a 125-year-old property in Toronto, Canada.

Posted by John at 1:09 PM Links to this post