OUR U.S. EMBASSY IN RAINBOW COLORS:

SEE: http://www.freeinews.com/161518-billy-kolber-the-worlds-gayest-u-s-embassy-photo.html;
EXCERPT: Photo courtesy of the U.S. embassy in Sarajevo
"Boznia and Herzegovina is not one of the 76 countries that criminalize homosexuality, but many lesbian, gay, bisexual, transgender and intersex people there suffer from lack of adherence to and implementation of national and international human rights instruments prohibiting discrimination based on sexual orientation or gender identity, according to a joint letter to the country’s Minister for Human Rights and Refugees, sent on behalf of 26 diplomatic entities, including the embassy of the United States. The American embassy in Sarajevo went one step further, bathing its building in a bright rainbow to commemorate the International Day Against Homophobia and Transphobia in May. Kudos to Ambassador Patrick Moon, the embassy staff, and the U.S. State Department for standing up against homophobia and transphobia in such a powerful and brilliantly colorful way." 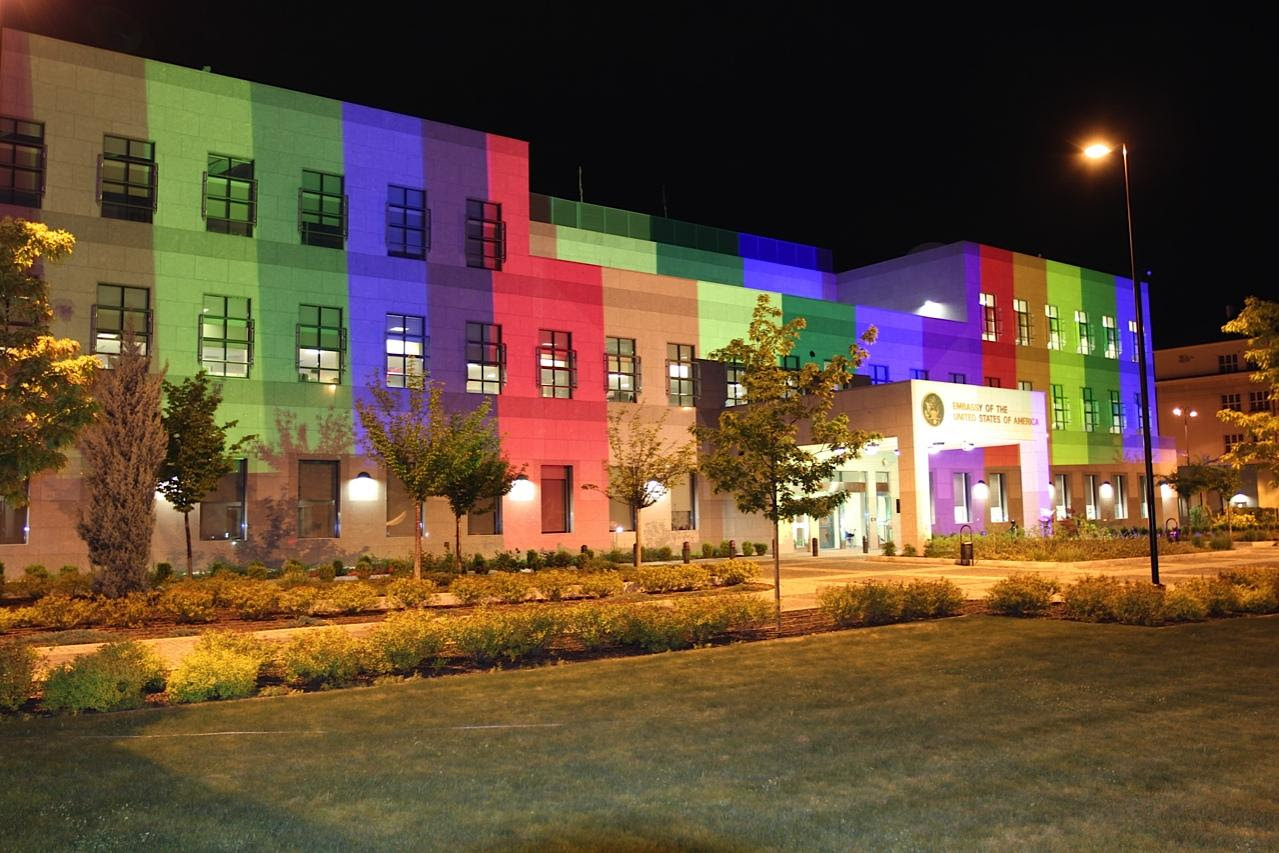 OBAMA CELEBRATES INTERNATIONAL DAY AGAINST HOMOPHOBIA, ETC
(Friday Church News Notes, May 22, 2015, www.wayoflife.org,fbns@wayoflife.org, 866-295-4143) - On the so-called International Day Against Homophobia on May 17 President Obama released a statement declaring, “We take this opportunity to reaffirm that lesbian, gay, bisexual, and transgender (LGBT) rights are human rights, to celebrate the dignity of every person, and to underscore that all people deserve to live free from fear, violence, and discrimination, regardless of who they are or whom they love.” Obama has been the most pro-homosexual president in U.S. history and has laid the groundwork for broad-scale persecution of anyone who does not accept “homosexual rights,” because when homosexuals gain the right to live as they please, Bible-believing Christians lose the right to oppose homosexuality as a sin. This is a major sign of the times, as Bible prophecy likens the end times to the days of Lot (Lk. 17:28-30). The International Day Against Homophobia began in 2005, and one of the founding organizations was the World Congress of LGBT [Lesbian, Gay, Bisexual, Transexual] Jews. In 2009 “transphobia” was added, and in 2015 “biphobia” was added, so it is now called The International Day of Homophobia, Transphobia and Biphobia. This illustrates how that there is no end to the moral abominations that will be lumped into the category of homosexual rights. The U.S. State Department issued a statement “reaffirming our commitment to the equality and dignity of all people, regardless of their sexual orientation or gender identity. Discrimination against LGBTI persons must end--and it must end now.” The U.S. Embassy in Sarajevo was illuminated with rainbow colors to mark the occasion. The day is officially recognized by the European Union Parliament.
_______________________________________________________

He And Michelle Will Be Celebrating

SEE: http://universalfreepress.com/obama-announces-gay-day-observance-he-and-michelle-will-be-celebrating/; republished below in full unedited for informational, educational, and research purposes:

Bathhouse Barry Obama issued a statement on Saturday indicating that he and his partner would be commemorating an International Day Against Homophobia and Transphobia on Sunday. It’s probably not an accident that he chose the traditional Christian day of worship for his celebration of sodomy. He could have announced it on a week day but that wouldn’t have had the symbolism. Friday was an option, the Muslim day of worship, that he also chose to forego.
Maybe he could have convinced them that they need to work on their tolerance. To that end, since he’s declared it an international day of celebration, why not load the family and a few select friends into Air Force One for a road trip to Saudi Arabia or his new best friends in Iran. They could invite Reggie Love and really do it up right.
Obama said in his statement that he’s working to “address the specific needs of transgender persons.” He’s not talking about psychiatric help – pills, implants and a political declaration of normal are all they’re lacking. They are entitled to them and they’re free now under Obamacare. The taxpayers can afford anything.
His statement read:

Michelle and I join our fellow Americans and others around the world in commemorating the International Day Against Homophobia and Transphobia tomorrow, May 17.  We take this opportunity to reaffirm that lesbian, gay, bisexual, and transgender (LGBT) rights are human rights, to celebrate the dignity of every person, and to underscore that all people deserve to live free from fear, violence, and discrimination, regardless of who they are or whom they love.
We work toward this goal every day. Here at home, [The White House?] we are working to end bias-motivated violence, combat discrimination in the workplace, and address the specific needs of transgender persons.  Overseas, I am proud of the steps that the United States has taken to prioritize the protection and promotion of LGBT rights in our diplomacy and global outreach.
There is much more to do, and this fight for equality will not be won in a day.  But we will keep working, at home and abroad, and we will keep fighting, for however long it takes until we are all able to live free and equal in dignity and rights.

As for all of those homosexuals thrown off of buildings by ISIS and those who were hung by the neck in Iran, the regime has apparently determined that that violence wasn’t bias-motivated and it didn’t happen in the workplace. And, since their deaths were dignified, sort of, Obama is putting everybody in his win column.
This will surely be a Mooch dance we are all better off never having witnessed.
Posted by John at 7:36 AM Links to this post

CHARISMANIA AT SOUTHERN BAPTIST CONVENTION: NO LONGER BARS MISSIONARIES FROM SPEAKING IN “TONGUES”~CHARISMATICS & DIVORCED NOW WELCOME INTO THE BIG TENT OF THIS LIBERAL DENOMINATION 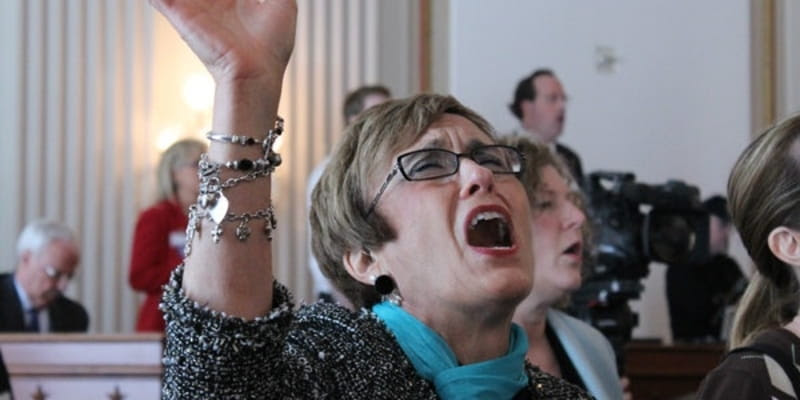 Last week, the Southern Baptist Convention dropped its rule barring “tongues speakers” from being missionaries (Christianity Today, May 14, 2015). Also dropped was the rule barring divorced people to serve as long-term missionaries. The allowance for “tongues” speaking is evidence of the ongoing inroad of the charismatic movement into the SBC. The charismatic practice of a “prayer language” has no support in Scripture and is mystical nonsense. Biblical tongues were earthly languages that were imparted supernaturally as a sign to the Jews of God’s new work of building the Church composed of Jews and Gentiles in one body. Paul made this crystal clear. “Brethren, be not children in understanding: howbeit in malice be ye children, but in understanding be men. In the law it is written, With men of other tongues and other lips will I speak unto this people; and yet for all that will they not hear me, saith the Lord. Wherefore tongues are for a sign, not to them that believe, but to them that believe not: but prophesying serveth not for them that believe not, but for them which believe” (1 Cor. 14:20-22). (See the report “A Private Prayer Language” using the search engine at www.wayoflife.org.)
Posted by John at 7:22 AM Links to this post