FBI: 1,000 HOMEGROWN JIHAD TERROR INVESTIGATIONS ACTIVE IN U.S.,
NOT COUNTING ISLAMIC STATE & AL-QAEDA SUSPECTS
BY ROBERT SPENCER
SEE: https://www.jihadwatch.org/2018/05/fbi-1000-homegrown-jihad-terror-investigations-active-in-us-not-counting-islamic-state-and-al-qaeda-suspects; republished below in full unedited for informational, educational, and research purposes:
“Outreach to the community.” Yeah, that’ll work. Hasn’t it worked beautifully since 9/11? Meanwhile, hampering these investigations is the fact that even now, the clueless and compromised FBI includes no study of the motivating ideology of jihad terrorists in its counterterror training. It is working in the dark, and the consequences will inevitably be…explosive. 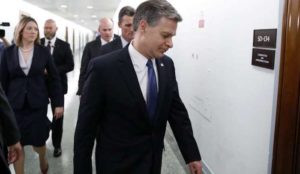 WASHINGTON — FBI Director Christopher Wray told a Senate Appropriations subcommittee on Wednesday that the bureau is tracking several hundred homegrown terror suspects, not counting those linked to a terror group or domestic extremist groups such as white supremacists.
“In every state in the nation who have been inspired by ISIS or al-Qaeda or similar groups, and radicalize, no longer by traveling to training camps, but via the internet through videos, or private chat rooms, or other means. How is the FBI countering that threat?” Sen. Susan Collins (R-Maine) asked at the Commerce, Justice, Science, and Related Agencies Subcommittee hearing to examine the FBI’s annual budget request. “It seems to be very difficult to identify these individuals.”
Wray told the senator she put her finger “on what I would call sort of our highest counterterrorism priority at the moment.”
“We have about 1,000 investigations into exactly the kind of people you’re describing, covering all 50 states as I’m sitting here right now. And that’s not even counting, you know, the al-Qaeda investigations, the traditional ISIS investigations, the domestic terrorism investigations, but just the group you’re talking about,” he said.
“And what makes it so hard is that there are not many dots to connect with some of these people. They pick soft targets, they use easy to use weapons, you know, IEDs, cars, knives, guns. And they can make decisions on the spur of the moment. We’re trying to get better at looking for red flags, as to when people who are getting radicalized sort of make that switch into potentially mobilizing.”
Wray said trying to stop homegrown extremists includes a lot of “outreach to the community, partnership with our state and local law enforcement who know those communities better, but it’s hard.”… 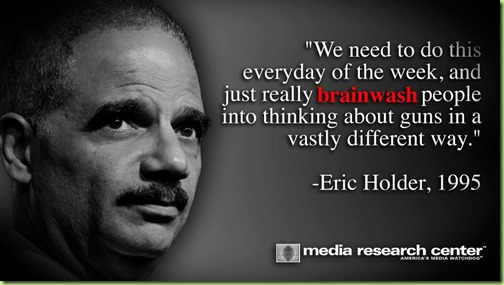 BY Ben Warren & Kit Daniels
SEE: https://www.infowars.com/pope-tells-molestation-victim-its-okay-to-be-gay/; republished below in full unedited for informational, educational, and research purposes:
It’s worth pointing out that Pope Francis was talking to a victim of Catholic sexual abuse when he reportedly told him it was “okay to be gay.”
Why it matters:
The context of the Pope’s alleged statement is being overshadowed by the statement itself. The context, however, is important because it sheds light on the decades-long molestation accusations against Catholic priests, many of which turned out to be true. It also sheds light on why the Pontiff is motivated to drift away from traditional Catholic teachings.
The victim, Juan Carlos Cruz, was sexually abused by the Rev. Fernando Karadima, who was found guilty by a Vatican investigation in 2011.
The Pope’s statement isn’t just about “homosexuality vs. the church”:
Pope Francis is an adherent of liberation theology promoted by Latin American socialists for decades with the end goal of destroying the church from within.
During the 20th century, communist revolutionaries found that, despite their best efforts to overthrow Latin American nations and install puppet regimes, they could never gain control of hearts and minds of populations due to the steady bulwark of the Catholic Church.
That’s why communists decided to subvert the Catholic Church from within by “legitimizing” Marxist teachings in the church through liberation theology, which merged Catholicism with Marxism.
Given that context, it isn’t surprising why Pope Francis, a Latin American pope who’s friendly to liberation theology, seems to go against the grain of Catholic teachings at every chance he gets.

SEE: http://pulpitandpen.org/2018/05/21/pope-says-god-makes-people-gay-and-thats-okay/; republished below in full unedited for informational, educational, and research purposes:
Juan Carlos Cruz is a sex-abuse victim of the Roman Catholic church. He is the chief whistleblower in the Chilean Romanist sex abuse scandal and spent days with Pope Francis last month at the Vatican. During the three days with the Pontiff, Cruz discussed his sexual orientation (the Chilean man is a homosexual) and explained to Francis what it was like to have been victimized by Romanist priests. Cruz’ time at the Vatican occurred after Pope Francis made some highly controversial remarks, dismissing the severity of the sexual assaults and tacitly defending some of those who helped to cover up the crimes. According to news reports, Pope Francis told the man that God gave him his sexual orientation and that his sodomy did not matter because God loved him.

The words were recorded by Carlos and repeated to the press, according to CNN.
The Catechism of the Catholic Church refers to homosexuality as an “inclination that is objectively disordered” (Paragraph 2398, 1997 edition). The Letter to the Bishops of the Catholic Church on the Pastoral Care of Homosexual Persons (1985) cites The Vatican Council II in Dei Verbum 10, which refers to the “supremely wise arrangement of God” in heterosexual relationship, and relationship, and asserts that homosexual relationships are a deviation of God’s wise arrangement (chapter 5). The Declaration on Certain Questions Concerning Sexual Ethics (December 29, 1975) called homosexuality “intrinsically disordered.”
Francis seems to be repeatedly at odds with Rome’s official teachings on human sexuality. It’s for this reason that more than 40 Romanist leaders have officially accused the Pontiff of multiple heresies.
There has, however, been a gradual and growing progressivism in the Romanist church on the topic of homosexuality. In 1973, the first Romanist priest came out publicly as gay, Robert Carter, and he was not removed as a priest. He went on to form Dignity USA, a pro-LGBTQ organization advocating for homosexual Romanists. Beginning in the 1980s with Cardinal Cooke of New York City, Papists began to teach that it wasn’t a sin to be homosexual, so long as you practiced abstinence, the very same position now being taught by Southern Baptist Convention leaders like Russell Moore. By mid-2017, the same diocese hosted a “pilgrimage” of LGBTQ Romanists to the Cathedral Basilica of the Sacred Heart for hundreds of married homosexuals who profess Catholicism. Today, Romanists all around the world publicly call for same-sex marriage and the normalizing of sodomy-based unions, with no punitive consequences from the Romanist church.
Greg Burke, the Pope’s spokesman, was asked about the Pope’s words of affirmation regarding homosexuality and he responded, “We do not normally comment on the Pope’s private conversations.”
In the meantime, the Scripture does speak to the issue of homosexuality, and it is not in agreement with the Pope of Rome. The Bible tells us that homosexuality is a sin (Genesis 19:1-13; Leviticus 18:22; 20:13; Romans 1:26-27; 1 Corinthians 6:9). Furthermore,  Romans 1:26-27 teaches specifically that homosexuality is a demonstration of human depravity and that God has given them over to this wickedness. While the Pope says that it doesn’t matter, the Bible, in 1 Corinthians 6:9, proclaims that homosexuals will not inherit the kingdom of God.
In reality, studies demonstrate that childhood sexual abuse is more likely – exponentially – to correlate with adult homosexuality, at least among men. If anyone made Carlos gay it wasn’t God, it was the Roman Catholic church. 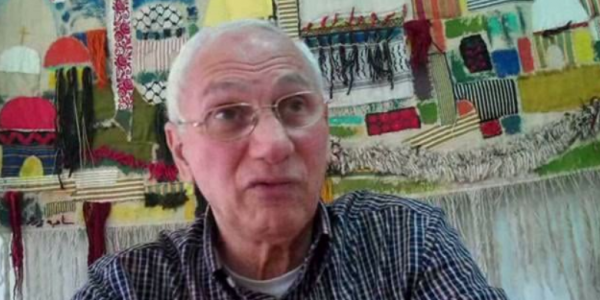 NAIM ATEEK ABOVE:
https://en.wikipedia.org/wiki/Naim_Ateek
http://sabeel.org/
Naim Stifan Ateek, (born in the Palestinian village of Beisan in 1937) is a Palestinian priest in the Anglican Communion and founder of the Sabeel Ecumenical Liberation Theology Center in Jerusalem. He has been an active leader in the shaping of the Palestinian liberation theology. He was the first to articulate a Palestinian theology of liberation in his book, Justice, and only Justice, a Palestinian Theology of Liberation, published by Orbis in 1989, and based on his dissertation for his degree in theology. The book laid the foundation of a theology that addresses the conflict over Palestine and explores the political as well as the religious, biblical, and theological dimensions. A former Canon of St. George's Cathedral, Jerusalem, he lectures widely both at home and abroad. His book, A Palestinian Christian Cry for Reconciliation, was published by Orbis in 2008, followed by A Palestinian Theology of Liberation, 2017.
SARI ATEEK BELOW:
https://stjohnsnorwood.org/about/our-leadership/

UK: THERESA MAY ANNOUNCES THE END OF FREE SPEECH: "WE VALUE FREE SPEECH; WE ALSO VALUE TOLERANCE TO OTHERS"

UK: THERESA MAY ANNOUNCES THE END OF FREE SPEECH: "WE VALUE FREE SPEECH;
WE ALSO VALUE TOLERANCE TO OTHERS"
BY ROBERT SPENCER
SEE: https://www.jihadwatch.org/2018/05/theresa-may-announces-the-end-of-free-speech-in-uk-we-value-free-speech-we-also-value-tolerance-to-others; republished below in full unedited for informational, educational, and research purposes:
FOR VIDEO BELOW, SEE:
https://twitter.com/OnlineMagazin/status/997803149200109568 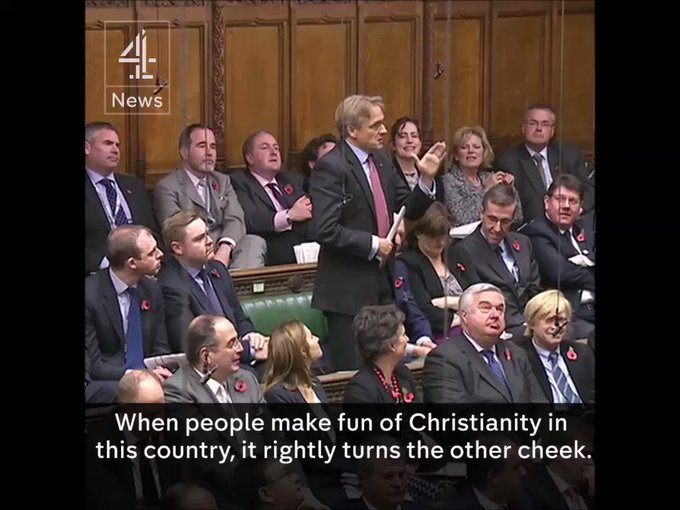 UK: At last someone asked Theresa May the right questions on freedom of speech in the British Parliament.

Twitter Ads info and privacy
Challenged in Parliament about why criticism of Christianity is taken for granted while criticism of Islam embroils one in societal (and legal) difficulties, British Prime Minister Theresa May answered:
"We value freedom of expression and freedom of speech in this country. That is absolutely essential in underpinning our democracy. But we also value tolerance to others. We also value tolerance in relation to religions. This is one of the issues that we’ve looked at in the counter-extremism strategy that the government has produced. I think we need to ensure that, yes, it is right that people can have that freedom of expression. But in doing so, that right has a responsibility, too. And that is a responsibility to recognize the importance of tolerance to others."
This heralds the end of the freedom of speech in Britain, for May’s statement is flatly self-contradictory. Who will decide whether one’s criticism of Islam has shaded over into becoming “intolerant”? Presumably the police or some governing authorities. But the freedom of speech is designed precisely to protect people from being prosecuted or persecuted by the governing authorities because their speech dissents from the accepted line. It was developed as a safeguard against tyranny.
By introducing this massive exception, May is turning the freedom of speech on its head and emptying it of all meaning. She is also implying that the British government will now be bringing the full force of the law against those who are deemed intolerant, and indeed, that has already begun.
Posted by John at 11:48 AM Links to this post