Posted by John at 6:30 PM Links to this post

THE REAL MANDELAS BEHIND THE GUSHING & GLOWING LIBERAL PROPAGANDA~GUESS WHO TOOK THEM OFF THE U.S. LIST OF TERRORISTS!

Woe to those who call evil good, and good evil; Who put darkness for light, and light for darkness; Who put bitter for sweet, and sweet for bitter!

But know this, that in the last days perilous times will come. But evil men and impostors will grow worse and worse, deceiving and being deceived.

“Saint” Mandela? Not So Fast!

SEE:
http://www.thenewamerican.com/world-news/africa/item/15888-saint-mandela-not-so-fast
EXCERPTS:
"For the past three decades, Nelson Mandela has been swathed in global media adulation unlike any other human being in history. No pope, president, king, war hero, movie star, or rock star can boast of having been the beneficiary of such undiluted, unalloyed, and unbroken acclaim. It is common for totalitarian dictators to employ their state-controlled media to create a worshipful cult of personality about themselves"
"Mandela has not had to worry about dirty laundry; he is the first individual to achieve a near-universal cult of personality on the global level, thanks entirely to the unparalleled glorification campaign bestowed upon him by the major media in the United States and Europe."
"Countless thousands of genuine prisoners of conscience, who have never done anything more “criminal” than praying, or speaking out against tyranny, are languishing in prisons all across the planet without so much as a peep of protest from the legions of Mandela worshipers and his chorus of media promoters."
SEE:

"In Death, as in Life, Truth About Mandela Overlooked"

— especially shocking when considering that the late leader and his Soviet-backed armed movement spent decades on the official U.S. government terror list before being removed in 2008. “I am one of the countless millions who drew inspirations from Nelson Mandela’s life,” Obama said. “I cannot fully imagine my own life without the example that Nelson Mandela set. So long as I live, I will do what I can to learn from him.”"
"“The ANC is a typical terrorist organization,” explained former British Prime Minister Margaret Thatcher. U.S. President Ronald Reagan put Mandela and the ANC on the American terrorist list in the 1980s."
SEE:
http://www.thenewamerican.com/world-news/africa/item/13920-new-evidence-shows-mandela-was-senior-communist-party-member:

EXCERPTS:
"During Mandela’s prosecution for sabotage and treason, prosecutors also produced a document written by the controversial figure in which he actually boasted of being a Communist Party member. On being released from prison, Mandela proclaimed at a rally: “I salute the South African Communist Party for its sterling contribution to the struggle for democracy.” He appeared (and was photographed) at multiple rallies with SACP boss Joe Slovo in front of a giant hammer and sickle." 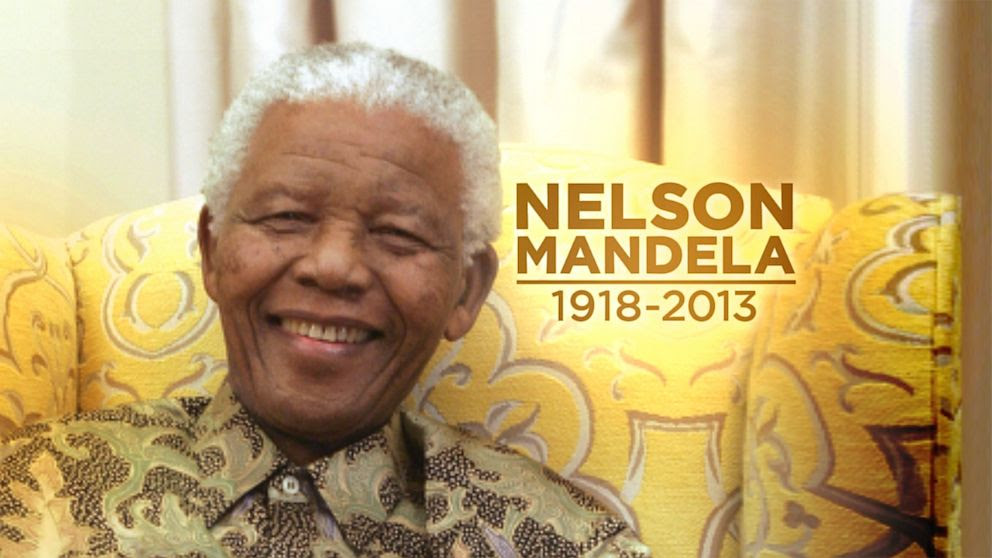 MISSIONARY CAUTIONS AGAINST
FILM PRAISING LIFE OF
NELSON MANDELA,
IDOLIZED AS A
"MESSIANIC FIGURE"
As reported by David Cloud of
Way of Life.org:
http://www.wayoflife.org/index_files/friday_church_news_14_48.html:
(Friday Church News Notes, December 6, 2013,www.wayoflife.org, fbns@wayoflife.org, 866-295-4143) - The following is excerpted from "African Missionary Cautions," Christian News Network, Nov. 26, 2013: "A renowned South African missionary is cautioning against a new film that praises the life of Nobel Peace Prize winner Nelson Mandela, whom he says was actually a terrorist that promoted abortion, pornography and homosexuality in the nation. Mandela: Long Walk to Freedom is set to open in theaters in the United States this weekend, as it follows the anti-apartheid activist from his humble childhood through his inauguration as the first elected president of South Africa. ... However, Dr. Peter Hammond of Frontline Fellowship of Newlands, South Africa recently told Todd Friel of the television and radio broadcast Wretched that Mandela was deeply involved in terrorist activity and is responsible for promoting wickedness in the land. ... '[H]e plead guilty to 156 acts of public violence and terrorism.' Hammond outlined that Mandela was the head of the military wing of the African National Committee (ANC), which Hammond also referred to as 'the abortion, necklacing and corruption party.' He said that 1,000 Africans were killed by necklacing in the country through the ANC, an act where terrorists would 'put an automobile tire over someone, pour petrol over them [and] set them alight.' ...  The South African missionary stated that Mandela's wife Winnie also participated in violent acts. 'Winnie Mandela actually was found guilty in court of the murder of a 12-year-old boy,' he explained. 'And it was upheld on appeal. She was sentenced to five years in prison, [but] she hasn't served a day.' In 2010, following the release of the Clint Eastwood filmInvictus, which also celebrated the life of Mandela with Morgan Freeman playing the lead role, Hammond likewise issued strong warnings. 'There's a lot of Christians out there who idolize Nelson Mandela because they've been given false, misleading and incomplete information,' he said. 'He has pushed for the legalization of abortion, pornography [and] homosexual relationships. ... [He was] trying to legalize prostitution. He's a radical liberal.'"
_____________________________________________________

COMMUNISM A GREATER EVIL THAN APARTHEID

My meeting with Nelson Mandela (1 of 2) Dr. Peter Hammond:

Directed by Clint Eastwood and starring Morgan Freeman as President Nelson Mandela, Invictus makes a major contribution towards the building up of the mythology of Nelson Mandela as a modern day idol. This stirring film on South Africas 1995 Rugby World Cup victory includes serious distortions of history.
Time and again the film focuses on Mandelas imprisonment on Robben Island, often with dream-like imaginative flashbacks of Nelson Mandela breaking rocks on Robben Island. The film even includes a pilgrimage to Mandelas cell in the prison on Robben Island, but there is never any mention of why he was imprisoned.
Nelson Mandela was the head of UmKhonto we Sizwe, (MK), the terrorist wing of the ANC and South African Communist Party. He had pleaded guilty to 156 acts of public violence including mobilizing terrorist bombing campaigns, which planted bombs in public places, including the Johannesburg railway station. Many innocent people, including women and children, were killed by Nelson Mandelas MK terrorists.
Invictus never mentions Nelson Mandelas open support for brutal communist regimes such as Fidel Castros Cuba, Robert Mugabes Zimbabwe, Red China, Gadhaffis Libya, Saddam Hussein, Yasar Arafat and other dictators. During the very time covered by Invictus Mandela received Fidel Castro, the longest reigning dictator in the world, and gave him the highest award that South Africa could give and then had both Houses of Parliament gather to hear an address from the Cuban tyrant.
The Ugly Reality
During the very time covered by the movie many hundreds of white farmers, and their wives and children, were being brutally murdered, actually tortured to death, often by UmKhonto we Sizwe guerillas, many of whom were now part of the South African National Defence Force.
Double Standards
Although Invictus gives all glory for the Springbok Rugby World Cup win to Nelson Mandela, it does not attach any blame to him for the rising crime and plummeting economy. During one short visual in the film Mandela looks at a newspaper headline which speaks of the rising crime and plummeting rand. This reality deserved a little bit more attention. During 46 years of National Party apartheid rule over 18,000 people had been killed by rioters, terrorists, by the police and the army, on all sides, including terrorists, civilian victims, military casualties and police. A total of 18,000 dead during 46 years of conflict. However, in peacetime, under Nelson Mandela, an average of 20,000 to 25,000 people were murdered every year.
Fueling the Crime Wave
Yet to celebrate his birthdays, Mandela would regularly open the prison doors and set many criminals, including armed robbers, murderers and rapists, free. Some of whom were murdering and raping within 24 hours of being released.
Economic Deterioration
In the 1970s, even while facing terrorism, riots and engaged in a border war with the Cubans in Angola, the South African Rand was stronger than the US Dollar. However, after years of US sanctions, the South African Rand had fallen to R2 to the Dollar. Under Nelson Mandela even with no war, no sanctions, no riots, no conscription, and with massive international aid and investment, the Rand plummeted to R8 to the Dollar, and even R10 to the Dollar, then R12 and even to R14 to the Dollar for a time. But according to Invictus, no blame can be attached to Nelson Mandela for the economic deterioration and the sky-rocketing crime rate under his presidency. However, he should be given all the credit for what the Springbok rugby team achieved on the field!
Legalising Abortion and Pornography
Viewers of Invictus also need to be aware that the kind and thoughtful gentleman portrayed in Invictus was the prime mover of the legalisation of abortion, pornography, gambling and homosexuality in South Africa and of the introduction of sex education in public schools. Since Nelson Mandela forced through the legalisation of abortion, not even allowing ANC MPs a conscience vote, and signed it into Law, 1 February 1997, over 900,000 South African babies have been killed through abortion, officially, legally and with tax-payers money.

My meeting with Nelson Mandela (2 of 2) Dr. Peter Hammond:

CHRISTIAN MISSIONARY AUDITED
FOR 13 YEARS BY MANDELA'S ORDERS
"HE SET HIS DOGS ON US":

Is Nelson Mandela a role model or criminal?

Peter Hammond interviewed by Todd Friel Of Wretched Radio about the murders, mutilations and atrocities of the "ANC":


"HOW TO BE A GOOD COMMUNIST"

You do not want a Winnie Mandela necklace, that is,

( A TIRE FILLED WITH GASOLINE HUNG AROUND YOUR NECK & SET ON FIRE): 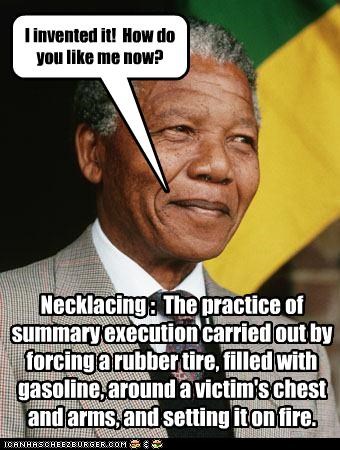 Who is Winnie Mandela? Denies necklacing:

http://www.thenewamerican.com/world-news/africa/item/17200-fake-interpreter-at-mandela-memorial-implicated-in-brutal-murders
Posted by John at 5:44 PM Links to this post