WHAT WOULD JESUS SAY? YOU DUMB FOOL, DON'T HELP BUILD TEMPLES TO BAAL (Friday Church News Notes, June 17, 2016,www.wayoflife.org, fbns@wayoflife.org, 866-295-4143) - On Sunday, June 12, Omar Mateen slaughtered 49 and wounded 53 in an attack at a “gay bar” in Orlando, Florida. Following are some facts about this case: The Pulse nightclub is advertised as “Orlando’s hottest gay bar,” promising patrons “an unforgettable night of fun and fantasy.” Mateen had been known to attend the bar and had a profile on a “gay dating” app. Mateen is the son of Muslim immigrants from Afghanistan. His father has a YouTube channel supporting the Taliban. According to Pew Research, 99% of Afghan Muslims support Sharia law. Nearly 30,000 of them were permanently resettled in the U.S. between 2001 and 2013. More than 91% of recent Middle East immigrants in the U.S. are on food stamps and nearly 70% are on cash welfare. Mateen attended the Islamic Center of Fort Pierce for more than 13 years. He travelled to Saudi Arabia twice on Islamic pilgrimages and took an online course from the Fundamental Islamic Knowledge, a group that promotes terrorism. He was investigated by the FBI in 2013 and again in 2014. A former classmate said Mateen celebrated the destruction of the Twin Towers on 9/11. In telephone conversations with Orlando law enforcement during the assault, Mateen made a “pledge of allegiance to ISIS.” The Islamic State’s Jihadist radio claimed Mateen as “one of our soldiers of the caliphate in America.” An FBI source said that Mateen called the agency before the attack and claimed to be a follower of IS leader Abu Bakr al-Baghdadi. Mateen’s wife said he had scoped out Disney World as a possible target. In March, Sheikh Farrokh Sekaleshfar, an expert on Shariah or Islamic law, spoke at the Husseini Islamic Center of Sanford, Florida, near Orlando, on “How to Deal with the Phenomenon of Homosexuality.” He said, “We know there’s nothing to be embarrassed about this, death is the sentence. We have to have that compassion for people. With homosexuals, it’s the same. Out of compassion, let’s get rid of them now” (“The United West,” Breitbart, Apr. 6, 2016). Both Sekaleshfar and the Husseini Center have tried to distance themselves from these remarks since the shooting. But Abu al-Ayna al-Ansari, a senior official in the Gaza Strip, told NewsTalk 990 AM in Philadelphia the night of the Orlando attack, “When the Islamic State throws gays from the roofs, it is not a sanction that they decided upon. This is our Sharia.” The Pulse bar was a “gun free zone.” Mateen purchased his guns legally and was compliant with all gun laws. In fact, he was registered with the Florida Department of Agriculture as a private security officer with a Class G firearm license and a concealed carry permit, having completed 68 hours of training, multiple criminal background checks and medical examinations. Mateen’s shooting spree was stopped when he was killed by men wielding guns. The One World Trade Center building in New York and the Eiffel Tower in Paris were lit in rainbow “pride” colors to honor the dead.
_____________________________________________________

https://www.jihadwatch.org/2016/06/gun-shop-owner-says-he-reported-omar-mateen-before-orlando-jihad-massacre
Posted by John at 12:57 PM Links to this post

DE TOCQUEVILLE'S PROPHECY
BY DAVID CLOUD
SEE: http://www.wayoflife.org/friday_church_news/17_25.php;
QUOTE:
“Society will develop a new kind of servitude which covers the surface of society with a network of complicated rules, through which the most original minds and the most energetic characters cannot penetrate. It does not tyrannise but it compresses, enervates, extinguishes, and stupefies a people, till each nation is reduced to nothing better than a flock of timid and industrious animals, of which the government is the shepherd” (Alexis de Tocqueville, Democracy in America, 1835). 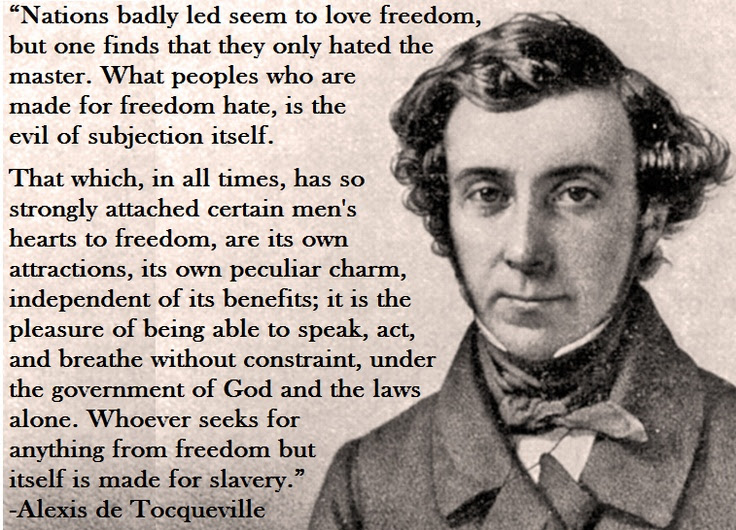 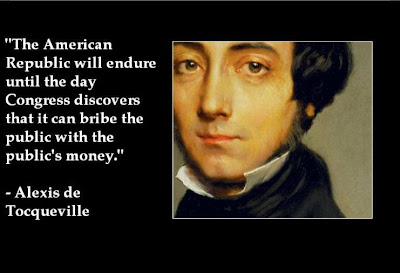 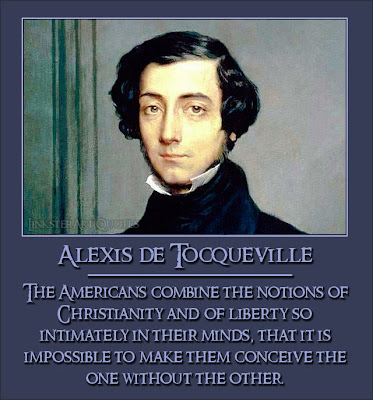