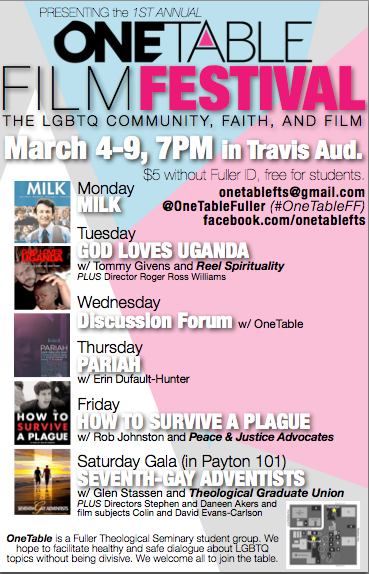 Fuller Seminary has given approval to a homosexual campus club called "One Table", http://onetablefuller.com/, as reported by The New American: http://thenewamerican.com/culture/faith-and-morals/item/16012-evangelical-fuller-seminary-says-yes-to-homosexual-campus-club.
Also reported by AZ Central: http://www.azcentral.com/news/free/20130713fuller-theological-seminary-christian-schools-gays-pasadena.html, from an Associated Press article.
The New American excerpt:
"Fuller's new president, Mark Labberton, to issue a statement in an attempt to clarify the school's somewhat muddied position on homosexuality. See: http://www.fuller.edu/printable.aspx?id=2147493985, titled: "Mark Labberton's Response to Recent AP Article". Labberton then mouthed One Table's own slogan, that the homosexual group exists to provide “a safe place to discuss issues related to sexuality and gender — issues that are vitally important, personal, and fraught with debate that is frequently divisive and contentious, not least in an evangelical context.” Ignoring that One Table was formed by a confirmed homosexual who is convinced he can embrace the Christian faith without rejecting what the Bible clearly says is sin, Labberton nonetheless insisted that the gay club “is not an advocacy group to alter seminary policy nor to direct any efforts in that direction.”

Mark Labberton Response in full as per above link:

Below is a response from Fuller's President Mark Labberton following the publication of an Associated Press article that ran on July 13, 2013 regarding an LGBT student group at Fuller Seminary.
Fuller has received comments about the Associated Press news article that ran over the weekend about OneTable and the seminary. We here at Fuller have long welcomed the opportunity to engage over vigorous issues of debate within the church and within culture. We understand that this leaves us vulnerable to critique from a broad spectrum.
We want to provide some clarity about the following points and questions that have been raised in response to the article: What is Fuller's position regarding same-sex marriage? What is the  OneTable student group and its purpose? What are Fuller's hopes in discussing issues of sexuality?
Fuller's position on same-sex marriage and behavior, reflective of our evangelical tradition's reliance on the scriptures, affirms that every student, faculty member, administrator, and staff person at Fuller is expected to abide by the Community Standards that “premarital, extramarital, and homosexual forms of explicit sexual conduct (are) inconsistent with the teaching of Scripture.” This position is clear.
OneTable at Fuller is one among 24 student-led groups, which can be formed when a number of students express interest in developing a discussion group on campus, such as the current Student Stewardship Group, G3 (Environmental) Initiative, and Students Serving Veterans.
OneTable provides a safe place to discuss issues related to sexuality and gender—issues that are vitally important, personal, and fraught with debate that is frequently divisive and contentious, not least in an evangelical context. OneTable at Fuller is not an advocacy group to alter seminary policy nor to direct any efforts in that direction. No student-led group "defines" Fuller's position, nor does it represent or encompass the many resources that Fuller has to offer. In terms of the topics of sexuality, marriage, and family, Fuller has been and will continue to teach about these issues in many ways both in the classroom and in campuswide workshops.
Fuller hopes to be a context in which many of the significant issues of our day can be discussed in relation to the Bible’s teaching for the life and witness of the church. As we are all aware, many evangelical and other churches are being asked questions related to sexuality by their congregations. As our students at Fuller train to become pastors and church leaders and for other vocations, issues about sexuality will likely be asked and discussed with some regularity. Our goal at Fuller Seminary is to help prepare our students to be able to minister lovingly, biblically, and faithfully on this and many other issues as well.
Finally, I would like to note how much we appreciate your questions and your prayers as we seek, in a spirit of humility, to be faithful witnesses—in word and in deed—to the gospel of Jesus Christ in the world.
Mark Labberton, President
Fuller Seminary
_______________________________________________________________________

Tony Jones, the emergent gay-affirming apostate alumnus and part-time faculty member of Fuller, had to add his support:

http://www.patheos.com/blogs/tonyjones/2013/07/16/gay-students-at-fuller-seminary/.
Excerpt:
"Fuller Seminary is both my alma mater (M.Div.) and a part-time employer (I teach a cohort in the D.Min. program). As far as I know, I am one of two faculty members at Fuller who publicly supports gay marriage and the full inclusion of GLBT persons in ordained ministry. As such, I’ve had many conversation about the issue of gays in the church with alumni, faculty, and administrators. I have the most conversations with prospective students, many of them gay and wondering if they will find Fuller a hospitable place."
See:
http://apprising.org/2006/12/22/tony-jones-and-the-emergent-church-christian-gay-is-a-ok/.
http://apprising.org/2010/01/05/tony-jones-stop-performing-legal-marriages/.
http://apprising.org/2008/11/20/tony-jones-influential-theologian-of-the-emergent-church-out-of-the-closet/.
http://apprising.org/2011/08/10/tony-jones-argues-for-open-marriage-and-polyamory/.

Tony Jones on Christian Leaders Coming out in Favor of Gay Marriage:

Posted by John at 3:24 PM Links to this post

THE DIGITAL AGE OF DISPENSING PAPERLESS INDULGENCES FOR THE PUNISHMENT DUE FOR SIN COMES TO THE CATHOLIC CHURCH. THE ESSENCE OF CUTTING EDGE HERESY COUPLED WITH SAVING THE TREES, BUT STILL A MATTER OF WORKS SALVATION THAT DENIES THE SUFFICIENCY OF CHRIST ALONE: From the Guardian UK: http://www.guardian.co.uk/world/2013/jul/16/vatican-indulgences-pope-francis-tweets?INTCMP=SRCH
"But a senior Vatican official warned web-surfing Catholics that indulgences still required a dose of old-fashioned faith, and that paradise was not just a few mouse clicks away. 'You can't obtain indulgences like getting a coffee from a vending machine,' Archbishop Claudio Maria Celli, head of the pontifical council for social communication, told the Italian daily Corriere della Sera. Indulgences these days are granted to those who carry out certain tasks – such as climbing the Sacred Steps, in Rome (reportedly brought from Pontius Pilate's house after Jesus scaled them before his crucifixion), a feat that earns believers seven years off purgatory.
But attendance at events such as the Catholic World Youth Day, in Rio de Janeiro, a week-long event starting on 22 July, can also win an indulgence. Mindful of the faithful who cannot afford to fly to Brazil, the Vatican's sacred apostolic penitentiary, a court which handles the forgiveness of sins, has also extended the privilege to those following the "rites and pious exercises" of the event on television, radio and through social media.
(See: http://en.wikipedia.org/wiki/Apostolic_Penitentiary)

'That includes following Twitter,' said a source at the penitentiary, referring to Pope Francis' Twitter account, which has gathered seven million followers. 'But you must be following the events live. It is not as if you can get an indulgence by chatting on the internet.'In its decree, the penitentiary said that getting an indulgence would hinge on the beneficiary having previously confessed and being 'truly penitent and contrite'." 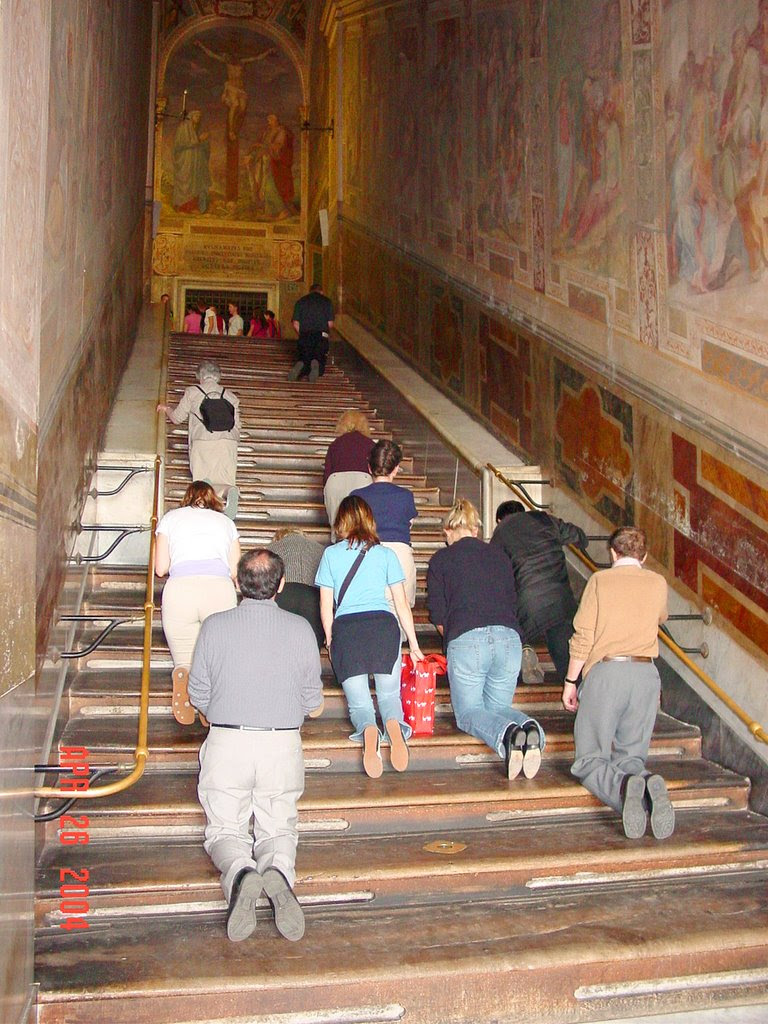 MARTIN LUTHER ON THE SCALA SANCTA

Erin Benziger of Do Not Be Surprised has done an excellent report about the damnable heresy of purgatory in connection with Pope Francis offering purgatorial indulgences for following his Twitter tweets, and also for Catholics following the live broadcasts of his activities in Brazil, namely his "rites and pious exercises" while he is there for the Catholic World Youth Day (and Week).
See Ms. Benziger's report here:
http://www.donotbesurprised.com/2013/07/the-vatican-uses-social-media-to.html.
Posted by John at 8:53 AM Links to this post