CATHOLICS & OTHER CHRISTIANS CALL ON TRUMP TO ADMIT MORE "REFUGEES", IGNORANT OF WIDESPREAD JIHADIST TERRORISM~POPE'S DOGMA OF "PEACEFUL" ISLAM A LIKELY CAUSE, AS WELL AS $535 MILLION OF TAXPAYER MONIES FOR REFUGEE RESETTLEMENT PROGRAMS

CATHOLICS & OTHER CHRISTIANS CALL ON TRUMP TO ADMIT MORE "REFUGEES", IGNORANT OF WIDESPREAD JIHADIST TERRORISM~POPE'S DOGMA OF "PEACEFUL" ISLAM A LIKELY CAUSE
BY ROBERT SPENCER
SEE: https://www.jihadwatch.org/2018/09/catholics-and-other-christians-call-on-trump-to-admit-more-refugees; republished below in full unedited for informational, educational and research purposes:
While these protesters may have a point about Christian refugees, they clearly want more Muslim migrants in the country as well. “We pray for the soul our country and the anti-refugee, anti-immigrant sentiment that is being fanned by those who want to divide us, rather than see our oneness as a human family.”
Is that really what the opponents of the Muslim migrant influx want to do? “Divide us”? Or do they have real concerns? Somali Muslim migrant Mohammad Barry in February 2016 stabbed multiple patrons at a restaurant owned by an Israeli Arab Christian; Ahmad Khan Rahami, an Afghan Muslim migrant, in September 2016 set off bombs in New York City and New Jersey; Arcan Cetin, a Turkish Muslim migrant, in September 2016 murdered five people in a mall in Burlington, Washington; Dahir Adan, another Somali Muslim migrant, in October 2016 stabbed mall shoppers in St. Cloud while screaming “Allahu akbar”; and Abdul Razak Artan, yet another Somali Muslim migrant, in November 2016 injured nine people with car and knife attacks at Ohio State University. 72 jihad terrorists have come to the U.S. from the countries listed in Trump’s initial immigration ban.
What’s more, all of the jihadis who murdered 130 people in Paris in November 2015 had just entered Europe as refugees. In February 2015, the Islamic State boasted it would soon flood Europe with as many as 500,000 refugees. The Lebanese Education Minister said in September 2015 that there were 20,000 jihadis among the refugees in camps in his country. On May 10, 2016, Patrick Calvar, the head of France’s DGSI internal intelligence agency, said that the Islamic State was using migrant routes through the Balkans to get jihadis into Europe.
The U.S. Catholic bishops have never expressed any concern about any of this. They are completely in line with Pope Francis, who has claimed risibly that “authentic Islam and the proper reading of the Koran are opposed to every form of violence.” This has become a super-dogma in the Catholic Church: if you don’t believe that Islam is a Religion of Peace, you will be ruthlessly harassed and silenced by the U.S. Conference of Catholic Bishops (USCCB) and the hierarchy elsewhere as well. The bishops of the Catholic Church are much more concerned that you believe that Islam is a religion of peace than that you believe in, say, the Nicene Creed. And so what possible reason could there be to be concerned about these “refugees”? It’s a religion of peace!
The bishops, of course, have 91 million reasons — indeed, 534 million reasons — to turn against the truth and disregard the safety and security of the American people: “In the Fiscal Year 2016, the United States Conference of Catholic Bishops (USCCB) received more than $91 million in government funding for refugee resettlement. Over the past nine years, the USCCB has received a total of $534,788,660 in taxpayer dollars for refugee resettlement programs.”
“Leave them; they are blind guides. And if a blind man leads a blind man, both will fall into a pit.” (Matthew 15:14)
It was not always thus. For centuries, in fact, as I detail in my book The History of Jihad From Muhammad to ISIS, the Catholic Church was at the forefront of efforts to resist jihad aggression in Europe. In it, you’ll discover:
Click here to order The History of Jihad From Muhammad to ISIS. 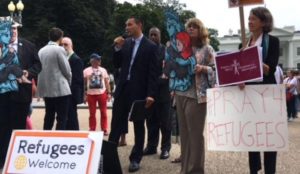 WASHINGTON, D.C. – Christians in the U.S. have taken the Trump administration to task for a dramatic drop in the numbers of persecuted Christian and other refugees being admitted into the country, even though administration officials promised last year to help.
While administration officials vowed on several occasions to help Christians in the Middle East facing what Vice President Mike Pence last year called an “exodus” from their ancestral lands, U.S. Christian groups trying to help them condemned the dramatic drop of refugees the Trump administration allowed into the United States last year and this year.
The Refugees Council USA said in a statement that policies “clearly aimed at Muslim refugees, ensure that Christians and other religious minorities from many of the countries on Trump’s list of suspect travel ban nations are also kept out. It suggests that the president has no real interest in religious persecution or the tenets of religious freedom.”
The U.S. Department of State recently released figures showing that 14,289 Christian refugees were admitted in 2018 compared to 25,162 the previous year.
Catholics joined a chorus of pleas by religious groups urging the administration to increase not just the number of Christian refugees but the number of people in general allowed to seek refuge in the U.S. On Sept. 12, they joined other groups outside the White House asking the administration to allow 75,000 refugees into the country next fiscal year.
“It is shameful that we even have to be pleading for a refugee admission goal of 75,000 for this next (fiscal year), when the United Nations reports that there are more refugees in the world today than at any other time since World War II – over 60 million. Other countries are taking in hundreds of thousands (of refugees), while our country is dismantling its refugee program,” said Jean Stokan, of the Sisters of Mercy justice team, in an email to Catholic News Service Sept. 13.
Stokan attended the Sept. 12 event outside the White House.
“We pray for the soul our country and the anti-refugee, anti-immigrant sentiment that is being fanned by those who want to divide us, rather than see our oneness as a human family,” she said….

POLICE STATE NEW JERSEY MIDDLE SCHOOL TEACHER SKIPS 9/11 LESSON FOR FICTIONAL TALE OF DISCRIMINATION AGAINST MUSLIMS
BY ROBERT SPENCER
SEE: https://www.jihadwatch.org/2018/09/new-jersey-middle-school-teacher-skips-9-11-lesson-for-fictional-tale-of-discrimination-against-muslims; republished below in full unedited for informational, educational and research purposes:
Here yet again we see it. When Muslims murder infidels, Muslims are victims. When racist, bigoted “Islamophobes” supposedly target Muslims, Muslims are victims. And when Muslims fake “Islamophobic hate crimes,” Muslims are victims. Always and in every situation, Muslims are victims, to be appeased and accommodated in every possible way. Once you understand, we can all lock arms and march together into our glorious multicultural, diverse future. 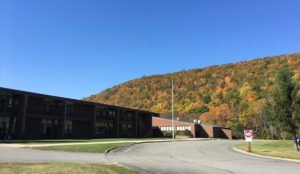 VERNON — On a day of mourning for the 3,000 people killed on Sept, 11, 2001, by Islamic terrorists inspired by Osama bin Laden, a middle school social studies teacher allegedly decided to skip that part of the discussion Tuesday and instead teach a fictionalized account of a Muslim boy being picked on because his name is Osama.
School officials thus far have been mostly mum on the matter beyond acknowledging that it was brought to their attention and dealt with internally, but one couple told the New Jersey Herald Wednesday that they are outraged and have since had their daughter pulled out of that teacher’s class.
Ed O’Rourke, a former Marine, said he and his wife, Jodi, found out about it almost by accident while having dinner with their daughter, who is in sixth grade, Tuesday evening.
“I thought it was a joke at first,” Ed O’Rourke said. “I couldn’t believe it.”
The story that the teacher had her students read, titled “My Name is Osama,” tells a made-up account of an Iraqi immigrant boy named Osama who faces taunts of “terrorist” in school by several students who tell him his mother, who wears a hijab, has “a bag on her head.” After pushing back against his tormenters, the boy is suspended from school for fighting.
The story included no mention of the ideology behind those who carried out the 9/11 attacks, which O’Rourke said should have been a part of the class discussion as well.
“It would be like, on a day about the Holocaust, doing a made-up lesson about a boy named Adolf being bullied by Jewish kids and saying we shouldn’t blame all Germans — or don’t pick on the poor kid named Adolf on the Jewish holidays,” O’Rourke said. “It’s grotesque.”
O’Rourke said he conveyed his concerns late Tuesday to Glen Meadow Middle School Principal Edwina Piszczek, who forwarded the message to Acting Superintendent Charles McKay.
After being invited to meet with them Wednesday morning, O’Rourke said he came away with a sense that they at least understood his concerns, though he received little in the way of specifics about how they planned to address it.
“They couldn’t have been better as far as letting me vent, and agreed that the timing couldn’t have been more horrific,” O’Rourke said. “They said they were unaware the teacher was planning to do this and that it fell through the cracks, though when I asked if they were planning any disciplinary action against the teacher, they said they weren’t sure at this point.”…