JEFF SESSIONS' PLAN TO EXPAND SLAVERY & GOVERNMENT THEFT
Civil Asset Forfeiture is going to expand under Sessions
If you have no property rights, YOU are the property.
Property rights are fundamental to a free people and a free society.
A society where there are no property rights, no judicial process before seizing property is a society of slaves where the owners can take whatever they wish, when they wish, under whatever pretense they choose.
“Civil” Asset Forfeiture allows “law enforcement” to steal property without ever charging anyone with a crime, let alone finding them guilty, in order to fund their bureaucracy.
Attorney General Sessions likes Civil Asset Forfeiture and has announced a plan to expand this unconstitutional, unlawful theft.

WHY PRESIDENT TRUMP SHOULD PARDON
THE BUNDYS & SUPPORTERS
Roger Stone: Trump's Friend Calls For POTUS To Pardon Obama Admin Political Prisoners
Trump friend and advisor Roger Stone calls for the full pardon of 14 Obama Admin political prisoners. Stone and Infowars are going to launch a petition to call for President Donald Trump to research their case and issue a pardon.
Roger Stone's Epic Speech For Bundy
Political Prisoners
Roger Stone speaks from the STAND! Event held in Las Vegas, Nevada on July 15, 2017. The event sought to bring a greater awareness to the political corruption suspending the rights of the Bundy family who have been held for expressing their First Amendment protected grievances for over 17 months.

Government Agents, Not Bundys, Were The Criminals

Govt Is Not God? Trump Needs To Tell Bundy Judge
Published on Jul 28, 2017
Trump tweeted “Government is Not God” and he was right to point out the founding principles of our country in the Declaration of Independence. We have God-given rights, not govt granted privileges. But those principles need to be put into practice in the trials of political prisoners who were exercising their right to peaceful assembly, to redress grievances, to legally keep and bear arms. The judge, however, is acting like God — forbidding any discussion of the actions of the BLM and keeping the jury in the dark.
Posted by John at 10:59 AM Links to this post

CANADA: NOT JUST OMAR KHADR, BUT THREE OTHER MUSLIMS RECEIVED MASSIVE PAYMENTS & GOVERNMENT APOLOGIES
BY  Christine Douglass-Williams
SEE: https://www.jihadwatch.org/2017/07/canada-not-just-omar-khadr-but-three-other-muslims-received-massive-payments-and-government-apologies;
There is a terrifying pattern in Canada now. In addition to rewarding jihadist Omar Khadr $10,500,000, leaving Canadians stunned, this message ended up in my inbox from a concerned Canadian citizen: “I can’t believe this was from March and no one remembers ever hearing about it. This would have caused quite the uproar, but somehow we missed it”: “Federal government reaches settlement with 3 Canadian men tortured in Syria and Egypt.”
Well, here is an excerpt from that article, which many Canadians may have missed:


After months of on and off negotiations, the federal government has reached a settlement with three Canadian men as compensation for the role Canadian officials played in their torture in Syria and Egypt.
Public Safety Minister Ralph Goodale and Foreign Affairs Minister Chrystia Freeland issued a statement Friday saying that with the settlement and an apology from government, the civil case involving Abdullah Almalki, Ahmad Abou-Elmaati and Muayyed Nureddin was now closed….
“On behalf of the government of Canada, we wish to apologize to Mr. Almalki, Mr. Abou-Elmaati and Mr. Nureddin, and their families, for any role Canadian officials may have played in relation to their detention and mistreatment abroad and any resulting harm,” the statement said.
“Our clients are gratified to have received an apology from the highest level of the Canadian government,” Phil Tunley, a lawyer representing the three men, told CBC News in an emailed statement. “They and their families are pleased that their long legal ordeal is over.”…
Ten years ago, they each filed $100-million lawsuits against the government but temporarily halted their legal proceedings to allow former Supreme Court justice Frank Iacobucci to conduct an internal inquiry. In his 2008 report, Iacobucci concluded that Canadian officials were indirectly responsible for their torture.

In case you read this through too quickly: they each filed lawsuits demanding $100,000,000, and they were actually paid an unknown sum of taxpayer dollars without taxpayers actually knowing what was going on. To read the full article, click HERE.
Canada still has not yet recovered from the grand payout of $10,500,000 to jihad killer Omar Khadr (accompanied by a government apology), and the fact that the well-being of Khadr’s American victims of jihad terror were completely disregarded also has Americans justifiably incensed:


“This story is repulsive,” said a Fox News host. To which former pizza entrepreneur and presidential candidate Herman Cain replied: “It is a pathetic interpretation of the law. Canada basically rewarded a murderer.”

Meanwhile, the Parliamentary Secretary to the Minister of Foreign Affairs, Omar Alghabra, who once “led an organization that opposed the designation of Hamas as a terrorist organization” and “supported sharia law for Ontario,” attended the Organization of Islamic Cooperation’s (OIC) 44th session of the Council of Foreign Ministers to learn how to advance “core values, including human rights, freedom, democratic governance and the rule of law” in Canada. So now the OIC, which is comprised of many human rights-violating nations that adhere to sharia norms, is teaching Canada. Canada is in deep trouble.
On a personal note, I am now being called up and taken aside by “certain folk” associated with the Canadian government with regard to my commitment to informing the public about the truth of what is going on. Human rights, democratic freedoms and equality of rights for all remain core concepts of all free nations, and every Canadian should enjoy these rights and freedoms. Those serving in the public sector should particularly honor these values as a matter of course. It is alarming to witness recent developments in Canada, from “anti-Islamophobia” motion M-103 to the reckless paying-out of taxpayers’ hard-earned dollars to jihad terrorists, with little to no accountability to Canadian citizens. The Canadian Press article below discusses the ongoing uproar on both sides of the border over the payout to Omar Khadr. Now, with Abdullah Almalki, Ahmad Abou-Elmaati and Muayyed Nureddin in the mix, Canadians should be demanding to know just how much was paid out to these men, and all the specifics of this shady case.


WASHINGTON — The federal payout to Omar Khadr was a big story in some conservative U.S. media outlets Monday, after nearly two weeks in which it had garnered barely a whisper south of the border.
It was the subject of a condemnatory national newspaper column; the top story on the Fox News website; fodder for cable-news chatter on Fox; and a huge surge in interest by Americans online.
“This story is repulsive,” said a Fox News host. To which former pizza entrepreneur and presidential candidate Herman Cain replied: “It is a pathetic interpretation of the law. Canada basically rewarded a murderer.”
The burst of attention started with a Wall Street Journal piece by a Canadian opposition MP.
Conservative Peter Kent published a scorching op-ed titled, “A Terrorist’s Big Payday, Courtesy of Trudeau,” that helped the story gain traction elsewhere.
The item began with a description of Khadr killing an American army medic, Christopher Speer, when he was 15 years old and fighting alongside al-Qaida in Afghanistan. It explained how Khadr won a court fight in Canada over how he was treated by Canadian intelligence officials while detained at Guantanamo Bay, was repatriated to Canada, released on bail and sued the Canadian government for $20 million for violating his rights.
The Ontario MP criticized the Trudeau government for settling with Khadr, while the victim’s family got nothing.
By Monday afternoon the issue was the No. 1 story on the Fox News website.
The Fox News item quotes Kent’s op-ed under the headline: “Gitmo Lottery: Canada makes millionaire out of terrorist who killed U.S. soldier.”
Google searches for Khadr’s name were up more than 700% Monday in the United States from the previous day, according to Google Trends.
The Fox News panel featuring Herman Cain didn’t delve too deeply into the fine points of the legal case. But one panellist raised the possibility that there was more to the story: “This is obviously a disgusting story,” she said. “But what do you do? Is there any other option under the law?”
Last week, Prime Minister Justin Trudeau said the Khadr issue had not come up in any meetings with U.S. state governors during a conference in Rhode Island.
But after Kent’s newspaper critique, Trudeau aide Gerald Butts tweeted: “A long (Conservative Party of Canada) tradition of airing Canadian disputes in the Wall Street Journal. It’s where Stephen Harper advocated for joining the Iraq War.”…..

ALSO SEE:
Palestinian Authority: Huge increase in jihad terror funding in 2017
SEE: https://www.jihadwatch.org/2017/07/palestinian-authority-huge-increase-in-jihad-terror-funding-in-2017
Posted by John at 10:38 AM Links to this post

PRESIDENT TRUMP'S FIERY HEALTHCARE MEETING WITH GOP SENATORS, SCOLDS THEM
President Trump tells GOP Senators not to leave town
until Obamacare is repealed and replaced
Posted by John at 10:24 AM Links to this post 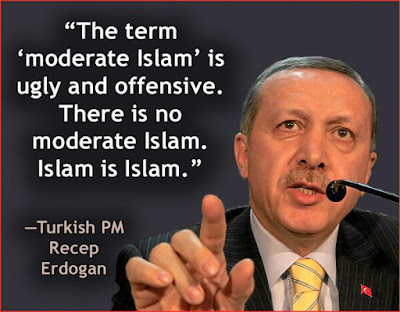 
Turkey’s new school curriculum drops Charles Darwin’s theory of evolution and adds the concept of jihad as patriotic in spirit.
The move has fuelled fears President Recep Tayyip Erdogan is subverting the republic’s secular foundations.
The chairman of a teachers’ union has described the changes as a huge step in the wrong direction for Turkey’s schools and an attempt to avoid raising “generations who ask questions”….
Mr Erdogan, accused by critics of crushing democratic freedoms with tens of thousands of arrests and a clampdown on media since a failed coup last July, has in the past spoken of raising a “pious generation”.
The curriculum, effective from the start of the 2017-2018 school year, also obliges Turkey’s growing number of “Imam Hatip” religious schools to teach the concept of jihad as patriotic in spirit.
“It is also our duty to fix what has been perceived as wrong. This is why the Islamic law class and basic fundamental religion lectures will include [lessons on] jihad,” Mr Yilmaz told reporters. “The real meaning of jihad is loving your nation.”
Jihad is often translated as “holy war” in the context of fighters waging war against enemies of Islam; but Muslim scholars stress that it also refers to a personal, spiritual struggle against sin.
Mehhmet Balik, chairman of the Union of Education and Science Workers (Egitim-Is), condemned the new curriculum.
“The new policies that ban the teaching of evolution and requiring all schools to have a prayer room, these actions destroy the principle of secularism and the scientific principles of education,” he said.
Under the AKP, which came to power in 2002, the number of “Imam Hatip” religious schools has grown exponentially. Erdogan, who has roots in political Islam, attended one such school.
He has spent his career fighting to bring religion back into public life in constitutionally secular Turkey and has cast himself as the liberator of millions of pious Turks whose rights and welfare were neglected by a secular elite.
Liberal Turks see Mr Erdogan as attempting to roll back the work of Mustafa Kemal Ataturk, the Western-facing founder of modern Turkey who believed education should be free of religious teachings.
Some government critics have said the new curriculum – which was presented for public feedback earlier this year – increased the emphasis on Islamic values at the expense of Ataturk’s role….