FIRST 100 DAYS
A MESSAGE FROM PRESIDENT ELECT
DONALD J. TRUMP
Published on Nov 21, 2016
The President-elect shares an update on the Presidential Transition, an outline of some of his policy plans for the first 100 days, and his day one executive actions.

ROBERT SPENCER ON OBAMA'S CLAIM
"NO RELIGIOUS RATIONALE"
FOR ISLAMIC TERRORISM
Published on Nov 22, 2016
Is there really "no religious rationale" for terrorism, as Barack Obama has said? Robert Spencer of Jihad Watch shows why that is a false assumption that leads to wrong and repeatedly failed policies. 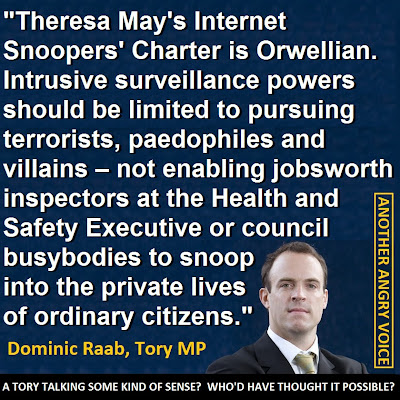 Last Thursday, the British parliament passed a bill granting the government “perhaps the most extreme spying powers in the developed world,” according to the U.K. Independent. The bill will, among other things, require Internet service providers to retain logs of their customers’ Web usage for up to a year and make them available to government agencies upon request. It will also force technology companies to make electronic devices less secure so that agencies can hack into them.
“The UK has just legalized the most extreme surveillance in the history of western democracy,” tweeted National Security Agency whistle blower Edward Snowden. “It goes farther than many autocracies.”
The Investigatory Powers Act, aptly dubbed the “Snooper’s Charter” by critics, is the latest version of a bill that the government has been trying to pass for years. A previous version, the Communications Data Bill, was prevented from becoming law in 2013. As usual, however, a government seeking greater power over the people it allegedly serves wouldn’t take no for an answer. Prime Minister Theresa May reintroduced the bill a year ago when she was Home Secretary, and it passed both houses of Parliament with, as the Guardian put it, “only token resistance.”
“In 20 years that I’ve been dealing with surveillance policy in this country I have never seen a more docile parliament,” Gus Hosein, executive director of the nonprofit Privacy International, told the Financial Times.
It’s enough to make one wonder what the intelligence agencies — which, according to the Guardian, just last month were found to have been “unlawfully collecting massive volumes of confidential personal data without proper oversight for 17 years” — have on these lawmakers. They were, after all, concerned enough to add an amendment to the bill protecting themselves from the new intrusions they are foisting on their fellow citizens.
The New Statesman summarized the most horrifying of the bill’s provisions, saying it will:
Force your Internet Service Provider to keep your Internet Connection Record (ICR) — a list of services and websites you use and when — for 12 months.
Oblige communications companies to retain your communications, hand them over when served with a notice, and remove encryption when requested.
Create new rules about who can intercept your communications, i.e. who can read your messages.
Explicitly legalize intelligence agencies, law enforcement and the armed forces interfering with (i.e. hacking) electronic equipment — for example, by covertly downloading the contents of your phone or remotely accessing your computer.
Allow security and intelligence agencies to use these powers in bulk to obtain large numbers of data about a large number of people.
Create warrants for authorities to examine “Bulk Data Sets” — basically, a lot of people’s personal information — such as medical records and tax histories.
Although the government claims the bill is needed to combat terrorism — the last refuge of the 21st-century scoundrel — it’s not hard to see how such powers could be abused. The Financial Times wrote that “dozens of public organizations and departments” — including “the Food Standards Agency and the Gambling Commission” — “will be able to access your communications, in some cases without a warrant.” Intelligence agencies will be free to scrutinize data from “an unlimited number of people who are not suspected of any criminal activity,” the paper added.
“All of us want to be safe, and protected from terrorists and the like — but the evidence that these powers are all needed is thin indeed,” observed Julian Huppert, a former member of Parliament who helped kill the 2013 bill. “However, the cost to all of our privacy is huge.” The bill, he declared, “should terrify all of us.”
Then there’s the danger from forcing tech companies to create “back doors” by which governments can hack into electronic devices. These companies, in fact, were among the few vociferous opponents of the bill, with Apple telling Parliament, “A key left under the doormat would not just be there for the good guys. The bad guys would find it, too.” What’s more, the bill allows U.K. agencies to hack into devices all over the world, not just within their own jurisdiction.
“The passage of the Snoopers’ Charter through Parliament is a sad day for British liberty,” Bella Sankey, policy director for the U.K. civil-liberties group Liberty, said in a statement. “Under the guise of counter-terrorism, the state has achieved totalitarian-style surveillance powers — the most intrusive system of any democracy in human history. It has the ability to indiscriminately hack, intercept, record, and monitor the communications and internet use of the entire population.”
Defenders of the bill claim that numerous safeguards were added to protect individuals’ privacy. Huppert, however, suggested that only “a tiny handful of cosmetic changes were made” to the bill — “most infamously, inserting the word ‘privacy’ into the title of one section, rather than actually doing something to support privacy.” The Independent reported that the bill contains “measures that are still undefined and so could be used by the government to force companies to do almost anything.” And the New Statesman pointed out that while the alleged safeguards sound good, “there are endless problems in practice,” such as “vague” requirements for obtaining a warrant that “could be stretched to rubber-stamp a lot of dubious requests.”
In short, the nation that gave the world George Orwell is now erecting Big Brother yet paradoxically expecting to remain a free country. But as Liberty policy officer Silkie Carlo asked, “Has any country in history given itself such extensive surveillance powers and remained a rights-respecting democracy?”
_____________________________________________________

Snoopers Charter to become law
in next few weeks