NAZI YELLOW STAR BADGES FOR JEWS USED BY IRANIAN PROFESSOR & HER STUDENTS
TO PROTEST ANTI MUSLIM RHETORIC & ISLAMOPHOBIA
INSENSITIVITY TO JEWS DELIBERATE? SEEMS SO!
ALTHOUGH SHE DENIES IT 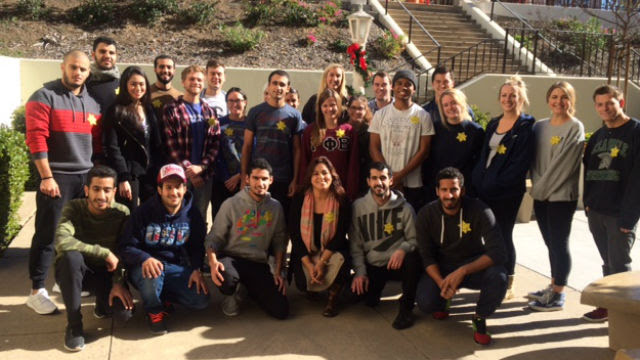 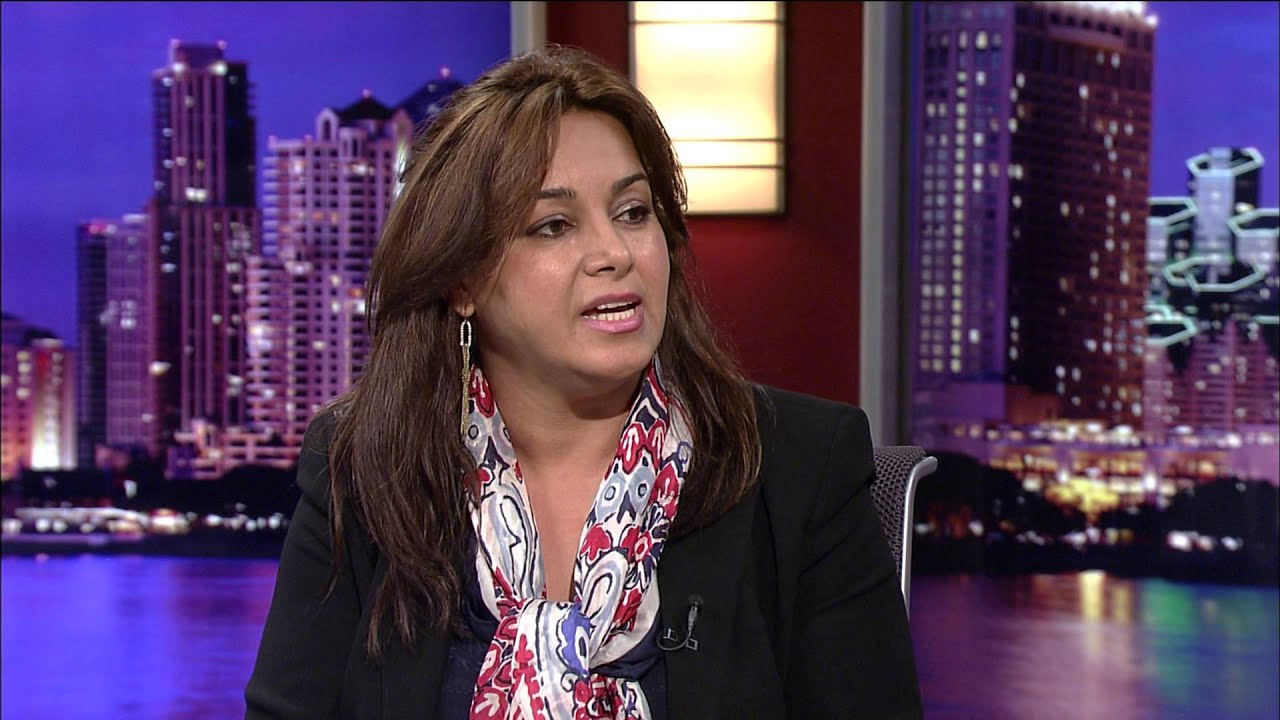 PROFESSOR DAVARY'S HATE FILLED CREATIVE EXPRESSION
THAT SHE USED TO BRAINWASH HER STUDENTS
ARE WE TO BELIEVE THIS ACCOUTREMENT REPRESENTS THE VICTIMHOOD WE ARE IMPOSING ON INNOCENT MUSLIMS?

THE IMPLICATION, IF WE DON'T BOW TO ISLAM
THE FINAL SOLUTION TO COME FOR JEWS, CHRISTIANS AND ALL OTHER "INFIDELS", IMPOSED BY RADICAL ISLAMOFASCISTS
ISLAMIC VICTIMHOOD??? 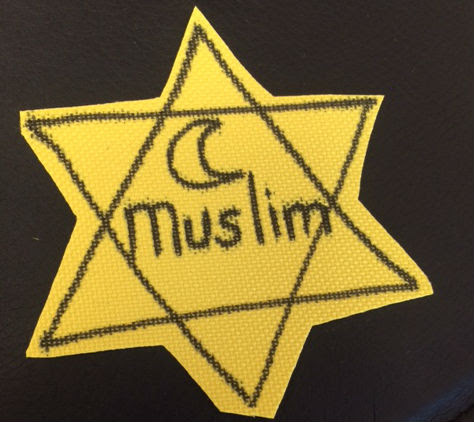 THE YELLOW STAR OF DAVID DURING THE NAZI PERIOD; MUSLIMS DID NOT SUFFER THEN AND NEITHER DO THEY SUFFER NOW. THE COMPARISON IS INAPPROPRIATE AND INACCURATE:
FOR THOSE WHO HAVE FORGOTTEN OR CHOOSE TO IGNORE HISTORY PRIOR TO THEIR BIRTHDAY:

MOST PEOPLE REMEMBER & ASSOCIATE THE YELLOW STAR WITH THE NAZI PERSECUTION & KILLING OF JEWS DURING THE HOLOCAUST, NOT THE ALLEGED PERSECUTION OF MUSLIMS IN THE 21ST CENTURY OR THE FORCED WEARING OF SPECIAL CLOTHING DATING BACK TO THE EIGHTH CENTURY
SEE: https://en.wikipedia.org/wiki/Yellow_badge;
EXCERPTS: The yellow badge (or yellow patch), also referred to as a Jewish badge (German: Judenstern, lit. Jews' star), was a cloth patch that Jews were ordered to sew on their outer garments to mark them as Jews in public at certain times in certain countries. Intended or not, it served as a badge of shame.
The practice of wearing special markings in order to distinguish Jews and other non-Muslims (Dhimmis) in Islam dominated countries seems to have been introduced by Umayyad Caliph Umar II in early 8th century.The practice was reissued and reinforced by Caliph Al-Mutawakkil (847–61), subsequently remaining in force for centuries. A genizah document from 1121 gives the following description of decrees issued in Baghdad:

Two yellow badges [are to be displayed], one on the headgear and one on the neck. Furthermore, each Jew must hang round his neck a piece of lead with the word Dhimmi on it. He also has to wear a belt round his waist. The women have to wear one red and one black shoe and have a small bell on their necks or shoes.

In largely Catholic Medieval Europe Jews and Muslims were required to wear distinguishable clothing in some periods.

Nazi propaganda leaflet: "Whoever bears this sign is an enemy of our people" 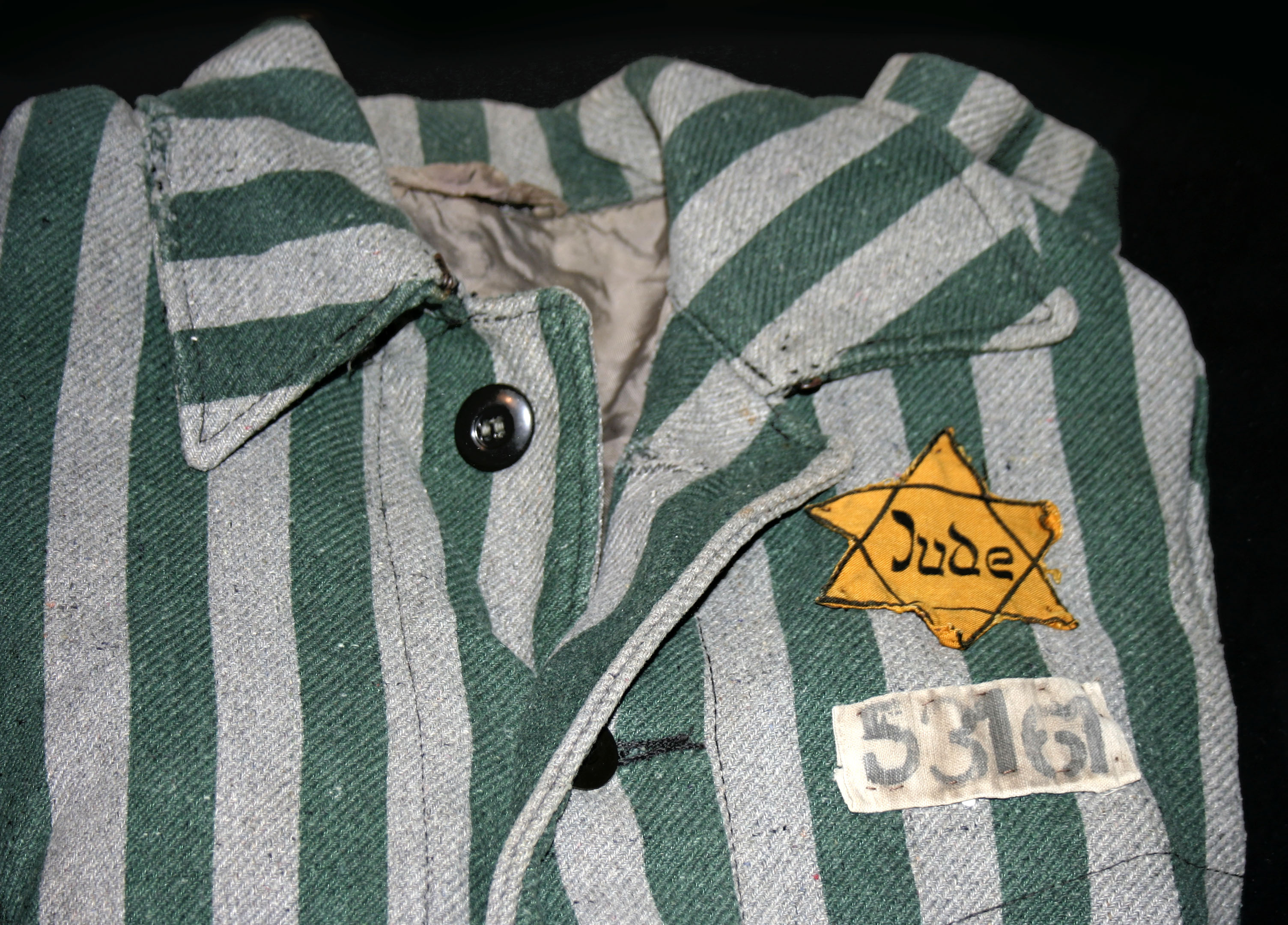 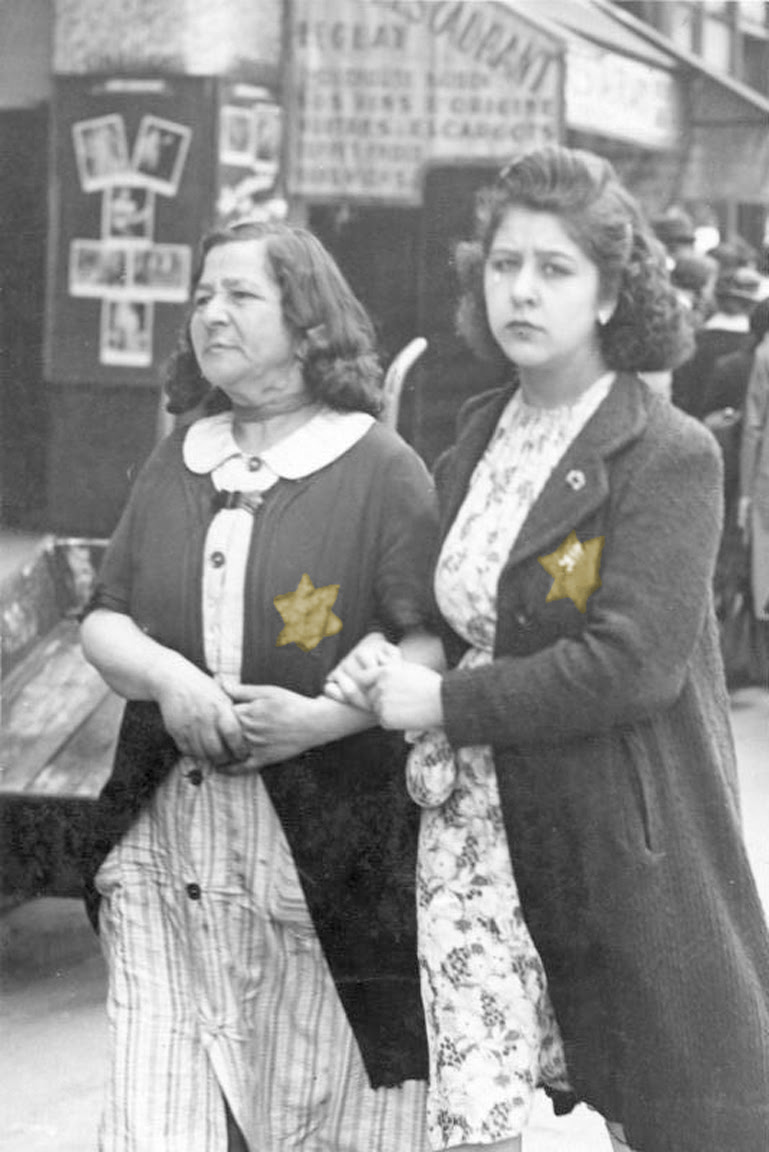 BAHAR DAVARY, IRANIAN AMERICAN, ASSOCIATE PROFESSOR OF THEOLOGY & RELIGIOUS STUDIES, UNIVERSITY OF SAN DIEGO, CALIFORNIA
Religious Studies, Islam, World Religions, comparative study of religion
EMAIL: davary@sandiego.edu; Phone: (619) 260-6864
SEE: http://www.sandiego.edu/cas/theo/faculty/biography.php?ID=280;
EXCERPTS:
Bahar Davary, PhD, has been a member of the faculty at USD since 2005. She is an associate professor of Religious Studies and an affiliate member of the Ethnic Studies program. Davary offers undergraduate courses on world religions, Islamic faith and practice, diversity courses and Honors courses, as well as preceptorials. She has team-taught a study abroad course Negotiating Religious Diversity in India. At the graduate level she has taught Comparative Religious Ethics at the Joan B. Kroc Institute for Peace and Justice. She will be team-teaching an Honors course, Women in Confucianism and Islam.

Davary’s scholarly research focuses on the interpretation of the classical Islamic canon as well as engagement with the concrete lives and social situations of women in various parts of the Muslim world. Her book Women in the Qur’an: An Islamic Hermeneutic, will be published by Edwin Mellen Press. In “Violence to the Text: Violence through the Text” she argues that the use of specific verses of the Qur’an, as if they were proverbs, violates the tenor of the text as a whole by rendering women as “the other.” In her article “Miss Elsa and the Veil: Shame, Honor, and Identity Negotiations” in Journal of Feminist Studies in Religion (2009), she furthered the theme of women as the “gendered other,” by focusing on the “veiled other.” In her publication “Muslim and Christian Women: The Image of God and the Common Legacy of Patriarchy” in Pakistan Journal of Women’s Studies: Alam-e Niswan she draw elements from both Christian and Islamic feminist thought in order to point to similarities and differences in their approaches to their respective textual tradition. In “Forgiveness in Islam: Is it an Ultimate Reality?” she addressed an essential element of Islamic ethics that has not been addressed in Islamic academic writings.

In the past years, Davary has taught a variety of courses in Religious Studies, including: Religions of the World, Introduction to Islam, Gender and Islam, Muslim Women in Literature, Ecology and the Sacred, Islamic Mysticism, Specific Topics in Islamic Thought. She has also team-taught courses including Religion and Resistance, and Crisis and Cultural Change.

SEE: http://iranianstudies.com/civicrm/profile/view?reset=1&id=892&gid=5;
DAVARY'S ISLAMIC/CATHOLIC EDUCATION AND INTERESTS:
CV2009USD_16a23cb78c676022866eaf709a8a2072.doc
VIDEO:
THE ISLAMOFASCISTS ARE NOT BEING PERSECUTED; THEY ARE THE PERSECUTORS & KILLERS, WHILE JUSTIFYING THEIR ACTIONS BASED ON THE KORAN

SCREWING UP THE MILITARY
WITH SOCIAL ENGINEERING:
THE WAR AGAINST GENDER ROLES
FUNNY BUT NOT SO FUNNY:
Group Leaks New Star Wars Movie Secrets
PENTAGON PROPAGANDA
TO GET WOMEN TO JOIN U.S. MILITARY!

ALEX JONES & CRYOTHERAPY FREEZING
"LIFE IMITATING ART WAY TOO MUCH"
Published on Dec 18, 2015
Alex Jones looks at the Pentagon placed propaganda in Star Wars The Force Awakens which is aimed at getting women to enlist on the front lines in the army. The NWO is looking for new females to fight on the battlefield which is why you see so many manly female hero leads in movies today.

Posted by John at 8:04 AM Links to this post