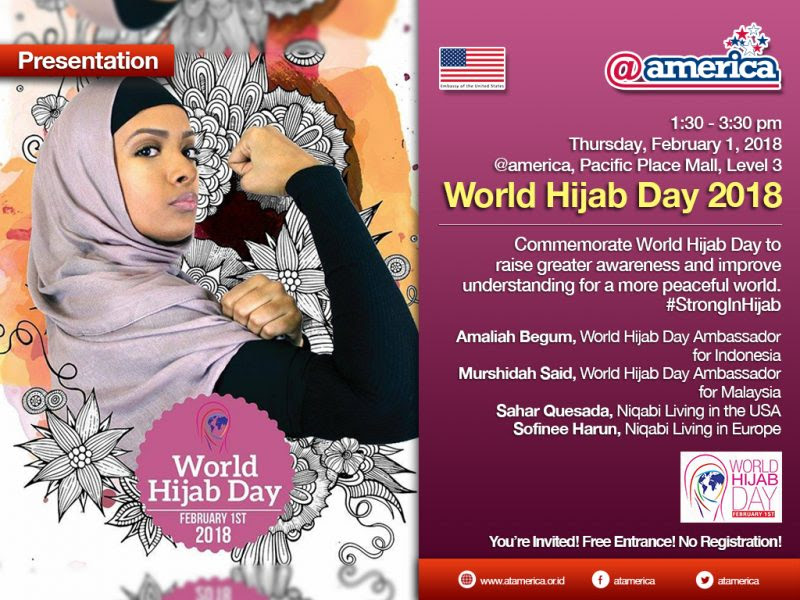 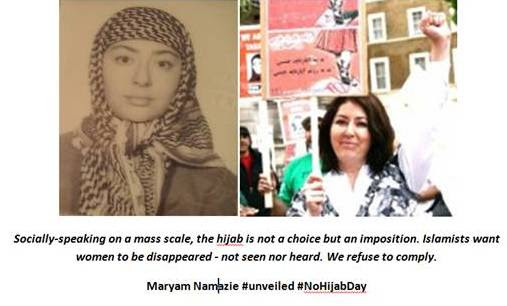 ABOVE: NAZMA KHAN EXTOLS THE VIRTUES OF THE HIJAB
WORLD HIJAB DAY ENCOURAGES NON-MUSLIMS TO DON HIJABS IN SOLIDARITY WITH MUSLIMS; IGNORES VICTIMS OF FORCED VEILING
BY ROBERT SPENCER
SEE: https://www.jihadwatch.org/2018/12/world-hijab-day-encourages-non-muslims-to-don-hijabs-in-solidarity-with-muslims-ignores-victims-of-forced-veiling
republished below in full unedited for informational, educational and research purposes:

Courageous women in the Islamic Republic of Iran are taking off their hijabs as a sign of resistance to the oppressive Sharia regime under which they live, and at least 29 women have been arrested for doing so. Who is standing in solidarity with them? Not the participants in World Hijab Day. 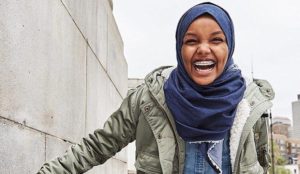 “World Hijab Day Encourages All Women to Wear Veil in Solidarity with Muslims,” by Edwin Mora, Breitbart, December 26, 2018 (thanks to the Geller Report):


The World Hijab Day (WHD) non-profit organization launched its 2019 campaign Wednesday, encouraging women and girls of all faiths, backgrounds, and ethnicities to “voice their choice” of wearing the headscarf for 24 hours on February 1, in solidarity with Muslim women across the world.
“#FreeInHijab is the much-needed hashtag for our current global situation where women in hijab are labeled by media as oppressed and symbolically imprisoned,” Nazma Khan told Turkey’s state-run Anadolu Agency (AA).
“Through this hashtag, women are encouraged to voice their choice of wearing the hijab; thus dispelling common misconceptions,” Khan added.
Each year since its inception in 2013, WHD has invited women to wear a hijab — a headscarf worn by Muslim women — for one day on February 1.
“Perhaps, this one-day experience will make them see the hijab in a different light,” Khan told AA.
“More than 70 global ambassadors from over 45 countries have been involved, and women from around 190 countries participate in the annual event,” Al Jazeera noted last year.
Khan explained that WHD’s 2019 motto is “Breaking Stereotypes, Shattering Boundaries,” noting that the campaign also includes “promoting World Hijab Day both online and offline globally.”
Each year, the non-profit organization prepares for World Hijab Day weeks in advance.
In 2017, WHD became a nonprofit organization focused on fighting discrimination against Muslim women through awareness and education, according to the organization’s official webpage.
Khan has told several news outlets that the hardships she faced growing up in New York City due to her hijab motivated her to establish World Hijab Day.
“I was constantly bullied in middle school and high school. Discrimination took on a different height after 9/11,” she said, referring to the Sept. 11, 2001 attacks in the United States.
She added, “Every day, I would face different challenges just walking on the street; I was chased, spat on, surrounded by goons, called a terrorist, Osama bin Laden, etc.”
Khan described her experience as “devastating,” adding that she did not want anyone else to go through the same thing.
“Therefore, I thought to myself, if I could invite sisters from all faiths and backgrounds to walk in my shoes just for a day, perhaps things would change,” she said.
In 2017, New York state and the House of Commons of the U.K. recognized February 1 as World Hijab Day. The Scottish Parliament and the Philippines have reportedly followed suit.
Khan dismissed accusations that the organization is spreading a political Islam ideology….

VIDEOS EXPOSING THE BRAINWASHING/PROPAGANDA OF THE HIJAB
& ITS REAL SYMBOLISM
The Unknown: Lies About Hijab 101
By Aynaz Anni Cyrus, Ex-Muslim Refugee From Iran
SEE: www.jamieglazov.com
AND: https://www.youtube.com/user/TheFMPMG/videos
Saudi Ex-Muslim: 'World Hijab Day
insults millions of women'
“#WorldHijabDay is an insult to millions of women and girls who do not have the choice to take off their hijab.” Saudi #ExMuslim Each time a new ex-Muslim voice rises, a thousand more realize another life is possible. Support the ExMuslim TV platform: https://ex-muslim.tv/support Watch http://ex-muslim.tv and share: http://twitter.com/exmuslimtv http://youtube.com/exmuslimtv http://facebook.com/exmuslimtv ExMuslim TV is a video platform at the service of the ex-Muslim movement. #ReligiousFreedom is the first freedom and now is the time to normalize #LeavingIslam without consequences. Universal Declaration of Human Rights, Article 1: All human beings are born free and equal in dignity and rights. They are endowed with reason and conscience and should act towards one another in a spirit of brotherhood.
"Wear Hijab Day"? Asra Nomani exposes the global PROPAGANDA campaign behind the Hijab
Asra Nomani discusses the oppressive politics of the hijab and exposes the global propaganda campaign behind "Wear Hijab Day". Excerpted from the debate "Politics & Clothing: The Hijab" at the Chicago Humanities Festival, April 30, 2016. Watch the full debate here: https://www.youtube.com/watch?v=twqAw... Asra Nomani is a journalist, former Wall Street Journal correspondent, and author of the book "Standing Alone: An American Woman’s Struggle for the Soul of Islam". She co-wrote the Washington Post opinion piece: "As Muslim women, we actually ask you not to wear the hijab in the name of interfaith solidarity":
https://goo.gl/FgcimN
Christian Commentary World Hijab Day

Prophecy Watchers
Published on Feb 16, 2016
A school in Rochester, NY is in the news for presenting hijabs
for the female students to wear on World Hijab Day.
What does the Bible say about head coverings?
Saudi Arabia and
Fetishizing the Hijab
(Yasmine Mohammed Pt. 2)
The Rubin Report
Published on Apr 17, 2017
Yasmine Mohammed (Author and Activist) joins Dave Rubin to discuss Saudi Arabia, the soft bigotry of low expectations, fetishizing the hijab and much more.
Gad Saad on Fetishizing the Hijab, Jew Hatred, and the Personal Cost of Being Public
Posted by John at 11:00 AM