As Marcus Cicero warned: “A nation can survive its fools and even the ambitious, but it cannot survive treason from within. An enemy at the gates is less formidable, for he is known and carries his banners openly, but the traitor moves amongst those within the gates freely, his sly whispers, rustling through all the alleys, heard in the very halls of government itself. For the traitor appears not a traitor; he speaks in accents familiar to his victims, he wears their face and their arguments, he appeals to the baseness that lies deep in the hearts of all men, he rots the soul of a nation, he works secretly and unknown in the night, to undermine the pillars of the city, he infects the body politic, so that it can no longer resist. A murderer is less to be feared.” 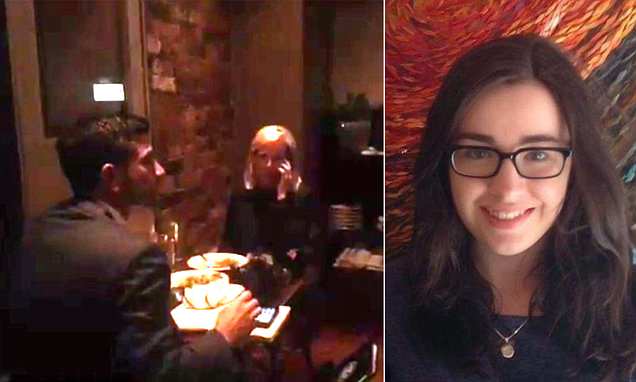 Socialist protester who hounded Homeland Security chief out of D.C. Mexican restaurant works for the Justice Department and joined during the Obama administration

‘What’s kind of lucky is at the DOJ,

we can’t really get fired’

BY JAMIE WHITE
SEE: https://www.infowars.com/project-veritas-unmasks-doj-official-using-databases-to-push-socialism-dox-business-owners/; republished below in full unedited for informational, educational and research purposes:
A Department of Justice paralegal reportedly utilizes government software to push her socialist agenda, as revealed in the latest installment of Project Veritas’ “Deep State Unmasked” undercover exposé series.
The undercover video shows anti-Trump DoJ employee Allison Hrabar, a member of the Democratic Socialists of America (Metro DC DSA) who was involved in driving DHS Secretary Kirstjen Nielson from a DC restaurant in July, discussing the use of DoJ resources to obstruct Trump administration policies.
“So Allison is a paralegal, so she, her living is researching people, so she’s very good at researching people. So, they just find the companies, and then the people that run those companies, and then they find their home address. She uses Lexis Nexis and a couple other software things,” said DSA member Cliff Green to a PV journalist.
Green goes on to say Hraber likely breaks the law using her position to push a socialist agenda.
“That’s the kind of thing that you would get fired for…people do not have the silver bullet, the smoking gun or whatever. Um, if they were able to get proof of that, you know? So, we’re all walking that line.”
Also featured is Jessica Schubel, the former Chief of Staff for the Centers for Medicare and Medicaid Services during the Obama administration.
“It’s kind of like the Nixon, ‘deep throat’ type of thing,” she says in the video.
The DoJ has issued a statement in reaction to PV’s latest video:
“These allegations are deeply concerning. Department policy prohibits misuse of government resources to advance personal interests. We are looking into this immediately and have referred this matter to the Inspector General as well.”
PV’s first Deep State installment featured State Department employee Stuart Karaffa discussing how he carries out socialist political activities on the taxpayer’s dime.
“Resist everything. Every level. F*ck sh*t up,” he said.
The State Department said Monday they have opened an investigation into Karaffa.
Twitter:

Posted by John at 9:54 AM Links to this post