Posted by John at 2:51 PM Links to this post

WARNING: THIS VIDEO IS ABOUT ABORTION COUNSELING AT AN ABORTION FACILITY IN THE BRONX, NY. FOR MATURE VIEWING ONLY
This video from YouTube was uploaded by Live Action Films:

Posted by John at 9:05 AM Links to this post

Dave Mosher of Christians United Against Apostasy has a very good post about how some publishers of homeschool materials are including evolutionary theories in them.
See: http://davemosher.wordpress.com/2013/04/29/parents-beware-christian-homeschool-publishers-increasingly-including-evolutionary-theories/.
Posted by John at 8:54 AM Links to this post

The interest in Messianic/Hebraic roots, history and experiential religious practices such as the Seder meal has grown tremendously. Its popularity can be credited no doubt to the desire of postmodern Christians and others for the next great mystical experience, signs and wonders, and of course non-doctrinal, non-dogmatic, non-judgmental religion, devoid of the Biblical focus on Jesus Christ alone, or anything else related to the Protestant Reformation, or the constraints of the five solas.
So, true to its signs and wonders theology and Messianic purposes, Debra Groller Ministries (Pentecostal/Word of Faith) of Deptford, NJ, will be hosting "The Tabernacle Experience" at Christian Camp Haluwasa, Hammonton, New Jersey, http://christian-camping.com/, September 14-22, 2013. See: http://debragrollerministries.com/#/the-tabernacle-experience. 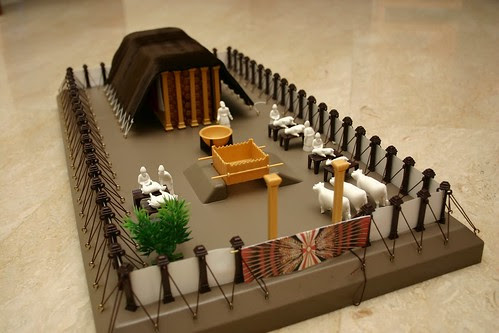 The Tabernacle Experience is another ministry of First Presbyterian (Reformed/Covenantal) Church of Florence, South Carolina, http://www.florencefirst.org/tabernacle_experience.html, and is described here: http://www.tabernacleexperience.com/journey.shtml, and below in their words:


"It is our mission to provide a life-size interactive Tabernacle of The Wilderness to
Communities, Churches and Individuals across the United States revealing Jesus the Christ in every aspect of the Spiritually impacting, Life Changing narrated driven journey."

The Tabernacle Experience is not a museum.It is not a theatre production.
The Tabernacle Experience is an Encounter with the Living God!
One step inside the Tabernacle Courtyard will translate you into Old Testament times. You will experience a day in the life of an Old Testament priest as you engage in the duties and rituals within the Tabernacle.
First you will be 'clothed' in the White Linen Garment of the priest. At the Altar of Burnt Offering you will lay your sacrifice on it's consuming fire. You'll approach the Laver and wash your hands in preparation for the work of The LORD.  At the Lampstand you'll light an oil lamp and participate in Communion at The Table of Bread. The smoke rising at The Altar of Incense will heighten your senses and remind you of your prayers ascending to the very throne of God. As you draw back the Curtain and enter The Most Holy Place your journey will culminate before the Ark of The Covenant and The Mercy Seat.
The truths of the Tabernacle are life changing. The Tabernacle Experience is a tangible, multi-sensory encounter that will stir your emotions and faith in the person of Jesus Christ.
Did you know Jesus said that the Scriptures point to him?
"If you had believed Moses you would have believed me because he wrote about me!”
Isn't this awesome?  The Old Testament Scriptures point directly to Christ! The Scriptures concerning the Tabernacle are no exception.
Just a short time after His resurrection, Jesus met two disciples on the road to Emmaus and joined them on their walk.  Jesus inquired why they were so sad and down and out. With heavy hearts they shared why they were filled with sorrow and disappointment. The very man they had trusted and believed in to be the Messiah was now dead. When the disciples arrived at their destination they invited Jesus into their home to share a meal and He accepted. They continued to engage in conversation and Jesus began rehearsing the Scriptures with them beginning with Moses and all the Prophets. He explained all the things concerning Himself. When Jesus had departed they said to one another, 'Did not our heart burn within us while He talked with us on the road and while He opened the Scriptures to us?" This is our prayer for you; that your heart will burn within you as you are tenderly escorted through The Tabernacle Experience by your High Priest Jesus.
You will be ushered out of the ordinary and into His extraordinary presence.
The narrated journey through the Tabernacle Experience is individual, private and intimate. The Tabernacle Experience is simple, yet utterly profound. The LORD’S profound Love, Compassion and Mercy towards us is evident in every aspect of The Tabernacle. His plan for our redemption is revealed and His desire to live among us is evident.
Our Mission and His Leading
It is our mission to travel from location to location bringing a life-size Tabernacle of The Wilderness and the full Spiritual impact it brings revealing Jesus the Christ in every aspect."
______________________________________________________________

The founder of "The Tabernacle Experience" is Jeanne Whittaker, who in her own words, describes her mystical experiences of being "whispered" to by a spirit entity who she believed to be God Himself saying ‘Bring Israel to them, build my Tabernacle” here: http://www.tabernacleexperience.com/story.shtml.
Whittaker herself describes what her vision was in this video:
http://www.youtube.com/watch?v=nQY65mAhbQU

Here is a 6+minute video which is more descriptive: http://www.youtube.com/watch?v=zFdNnhpIDMw.


A Messianic/Hebraic ministry called "Messiah's Mandate" headed by Ron Cantor www.messiahsmandate.org,  is purporting to claim that the identity of Jesus was robbed of His Jewishness in his book "Identity Theft", and therefore should be called Yeshua by Christians and Jews. Likewise, Cantor claims that all the apostles, Mary, Peter, Paul etc. were renamed by transliteration from Aramaic, Hebrew and Greek.
In "Eight Reasons Gentiles Should Care About the Jewish Roots", http://messiahsmandate.org/category/jewish-roots/, Cantor attempts to place a load of guilt on Christians by alleging that when such roots are not continuously remembered and honored, certain unfortunate consequences result almost by default: accusations of Jewish deicide (killing of God), holocausts (i.e. death of Jews), replacement theology (Church replaces Israel), Jews ignorant of their own Messiah, Christians being "cut off" for mistreating Jews (misuse of Romans 11:17-23). Other spurious claims are that Jesus will come back as a Jew to Jerusalem, and "no Israel equals no salvation".
This is just one more Messianic ministry attempting to convince Christians they are and have been neglecting their Jewish roots, and that they ought to reform their thinking, beliefs and worship to be more Jewish, and to help Israel accept Jesus as Messiah.


The New American blasted Obama at: http://thenewamerican.com/culture/faith-and-morals/item/15237-obama-addresses-pro-abortion-gala-condemns-efforts-to-protect-unborn.
Quote from this article:
"Ridiculing the over 40 states where lawmakers have introduced or passed laws to protect the unborn, Obama quipped to the supportive chuckles of the pro-abortion audience: “When you read about these laws you want to check the calendar. You want to make sure you're still living in 2013. Forty years after the Supreme Court affirmed a woman's constitutional right to privacy, including the right to choose [abortion], we shouldn't have to remind people that when it comes to a woman's health, no politician should get to decide what's best for you.”"
Posted by John at 10:49 AM Links to this post

POPE SAYS JESUS CAN ONLY BE FOUND WITHIN CATHOLIC (MOTHER) CHURCH


Mike Gendron of Proclaiming the Truth Ministries, a former Roman Catholic, said that certain key words in the address indicated that the Pope was referring to the Catholic religion. “He must be referring to the Roman Catholic Church since he said, ‘the Mother Church which gives us the faith that is our identity,’” Gendron told Christian News Network. “So often when we witness to Catholics and ask if they are a Christian they say, ‘No, I am a Catholic.’ That is their identity. We know that the true Church does not give anyone faith. It is given by God as a gift of His grace.”

It is evident that David Ashcraft, senior pastor of LCBC Church (Lives Changed by Christ) of Manheim, PA, http://www.lcbcchurch.com/, has brazenly plagiarized a sermon for his recent Easter service, once given by Andy Stanley titled "The Juno Dilemma". For the most part this was a word for word plagiarization.
This is the six campus mega-church of about 11,000 members which recently was joined by the Branch Creek Community Church www.branchcreek.org, of Harleysville, PA headed by Craig Bishop,

whose leadership was originally composed of disaffected, parting of the ways Mennonites from the mother Franconia Mennonite Church & Conference, among other Mennonite churches in the Souderton, Montgomery County, PA area. Montgomery Media reported on this September 12, 2012 here: http://www.montgomerynews.com/articles/2012/09/12/souderton_independent/news/doc5049422921736647302467.txt.
Chris Rosebrough of Fighting for the Faith has this audio comparison, section by section, of the two pastors, showing that it is truly word for word.

Americans for Truth Against Homosexuality, www.aftah.org, has an important update regarding the Boy Scouts new positions about homosexuality within its ranks:

WHAT GOES ON AT JOHN MACARTHUR'S "THE MASTER'S COLLEGE"

A followup report from Ralph Ovadal, pastor of Pilgrims Covenant Church, Monroe, Wisconsin, pcc@pccmonroe.com, about the youth events at The Master's College is below.

Posted by John at 7:26 AM Links to this post