DEFIANT CREFLO DOLLAR: YOU CAN'T STOP ME FROM BUYING $65 MILLION JET PLANE~SPACE SHUTTLE IS NEXT NAME AND CLAIM IT ITEM

"IF THEY FIND LIFE ON MARS, I'LL HAVE TO BELIEVE GOD FOR A SPACE SHUTTLE"

by Heather Clark
SEE: http://christiannews.net/2015/04/23/you-cannot-stop-me-televangelist-creflo-dollar-defies-opponents-in-effort-to-buy-65-million-jet/; republished below in full unedited for informational, educational, and research purposes: 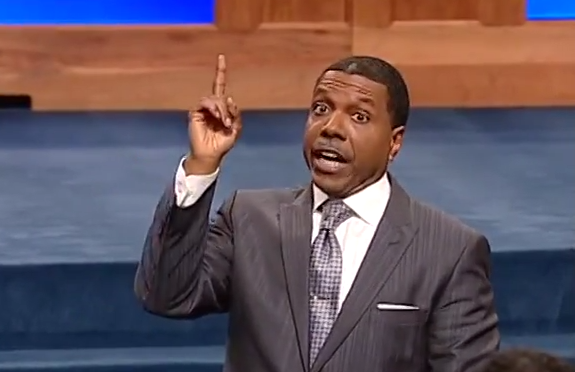 COLLEGE PARK, Ga. – Televangelist Creflo Dollar defied opponents of his global effort to purchase a $65 million dollar jet in a recent message delivered to his congregation.
“Let me tell you something about believing God. I can dream as long as I want to. I can believe God as long as I want to,” he states in a video posted to YouTube by a group not affiliated with Dollar. “If I want to believe God for a $65 million plane, you cannot stop me. You cannot stop me from dreaming.”
As previously reported, staff World Changers Church International in College Park, Ga. had posted an online plead on the organization’s website last month as Dollar asked for 200,000 people to donate $300 dollars each so that he could purchase a new G650 airplane.
Dollar explained that his current 1984 jet, which he purchased in 1999, experienced engine failure in London on a recent trip to Australia. He said that the plane is grounded and is in need of being replaced.
“The plane is not so Creflo Dollar can get on by himself and fly,” public relations representative Juda Engelmayer told the Christian Post. “They take a ministry team of 10 to 15 people with them. They take thousands of pounds of food and provisions with them when they go around the world. If he’s coming to the New York church, he’ll hop on a Delta flight. If he’s taking 12 people plus 100,000 pounds of food, it’s not that simple.”
But as word broke about the project, some still expressed dismay as to why Dollar, who leads a 30,000-member megachurch and lives in a million dollar home, needs such an expensive aircraft, which is reportedly sought out by billionaires. David Graham, Global Express aircraft captain with Advanced Air Management, told the publication that Engelmayer’s claims don’t add up.
“[The aircraft] cannot carry 12 people and 100,000 pounds of food and supplies,” he said.
Dollar’s staff removed the online plea from the World Changers website following negative public reaction and said that the televangelist would be flying commercial while the campaign was being reassessed. However, in a recent message delivered to his congregation, Dollar appeared determined to purchase the jet despite opposition.
“You cannot stop me from dreaming. I’m going to dream until Jesus comes,” he said as his congregation stood to their feet and broke out into cheers. “And here’s another thing I want you to understand: … If they discover life on Mars—if you think a $65 million plane was too much—if they discover that there’s life on Mars, they’re going to need to hear the gospel and I’m going have to believe God for a billion dollar space shuttle because we got to preach the gospel on Mars.”
Dollar urged those gathered to likewise “dream big.”
“I dare you to tell me I can’t dream. I dare you to tell me that I can’t believe God,” he said. “Dream on, baby. Don’t dream on what you can have, dream about what the devil says you can’t have. Dream for the best. Dream for the best healing. Dream for the best deliverance. Dream for the best house. Dream for the best car. Just ’cause the world don’t have it, doesn’t mean you can’t have it.”
Dollar, who has drawn criticism for years over his prosperity preaching and video clips showing the televangelist dancing in tithes with “money cometh” preacher Leroy Thompson, told his congregation that he believes God is on his side and that the effort is therefore unstoppable.
“You cannot stop and you cannot curse what God has blessed,” he asserted. “Half the people that are commenting on the Internet don’t even know me. They don’t know this ministry. They don’t know what we do. That’s why they ask the question, ‘What does a preacher need with an airplane?’ If you knew what we did then you wouldn’t ask that question. But you don’t know what we do.”
“The early Church was married to poverty, prisons and persecutions. Today, the Church is married to prosperity, personality and popularity,” the late preacher Leonard Ravenhill once stated.

PAYPAL'S INSANITY ON DISPLAY: ABSOLUTE OWNERSHIP OF USERS MATERIAL AND BRAIN CHIPS IN THE BACK OF YOUR SKULL

PAYPAL'S INSANITY ON DISPLAY:
ABSOLUTE OWNERSHIP OF USERS MATERIAL AND BRAIN CHIPS
IN THE BACK OF YOUR SKULL
by Paul Joseph Watson
SEE: http://www.infowars.com/paypal-asserts-copyright-ownership-over-all-intellectual-property-of-its-users/; republished below in full unedited for informational, educational, and research purposes:

In an alarming new update to its user agreement released this week, PayPal has announced that it will assert copyright ownership over all intellectual property of anyone who uses its payment services.
The update comes in the aftermath of the announcement that eBay and PayPal will split apart into two separate companies.
Under the heading “Intellectual Property,” PayPal announces that it is introducing a new paragraph to its agreement, effective July 1, 2015, that will allow the company to “use content that you post for publication using the Services”.

“When providing us with content or posting content (in each case for publication, whether on- or off-line) using the Services, you grant the PayPal Group a non-exclusive, worldwide, perpetual, irrevocable, royalty-free, sublicensable (through multiple tiers) right to exercise any and all copyright, publicity, trademarks, database rights and intellectual property rights you have in the content, in any media known now or in the future. Further, to the fullest extent permitted under applicable law, you waive your moral rights and promise not to assert such rights against the PayPal Group, its sublicensees or assignees. You represent and warrant that none of the following infringe any intellectual property right: your provision of content to us, your posting of content using the Services, and the PayPal Group’s use of such content (including of works derived from it) in connection with the Services.”

PayPal users reacted to the terms of agreement update by expressing their shock and confusion.
“Wow! Does this mean that anything I might funnel through Paypal will belong to them, and that they can do what they like with it, without consultation, interference or redress?” asked one respondent. “So, for example, my business website: they could override my copyright if I channel it through them in any of their services?”
“This paragraph really made my hair stand on end,” remarked another Paypal user. “I hope someone better qualified than myself will be along to reassure us soon. Alas, PayPal is a necessary evil in order to do business online but, boy, they do take liberties from their position of power.”
In 2012, some Facebook users began posting status updates asserting that they maintained copyright ownership of the content they posted on the social media network in the mistaken belief that Facebook had claimed permanent ownership of all intellectual property posted on their website.
In reality, Facebook’s own terms stated, “You retain the copyright to your content. When you upload your content, you grant us a license to use and display that content.”
However, the Paypal update, which copyright lawyers have yet to weigh in on, appears to be a lot more draconian and is sure to cause controversy.
_______________________________________________________


Paypal Wants Brain Chips to Replace Passwords:
Published on Apr 20, 2015
Paypal's 'Global Head of Developer Evangelism' Jonathan LeBlanc is pushing implantable brain chips as a replacement for passwords, but insists that such technology must be made to fit inside "cultural norms" before it is accepted by the general public.