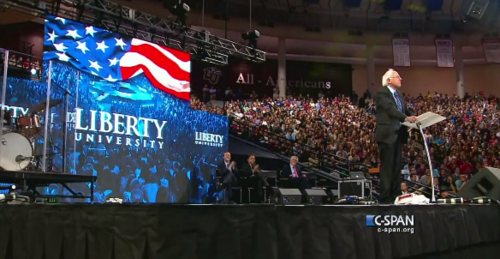 FROM: http://www.huffingtonpost.com/2015/04/30/bernie-sanders-faith_n_7174514.html; EXCERPT:
"Sanders is the presidential contender most willing to dissociate himself from religion. Though he identifies as Jewish and by Jewish law is Jewish, he has freely acknowledged that he is not a religious person. He scored a solid zero from Ralph Reed’s Faith and Freedom Coalition in its most recent scorecard and a 100 from the abortion rights group NARAL Pro-Choice America."
TRYING TO GET "CHRISTIANS" TO COMPROMISE;
WHEN CONFRONTED HE PRETENDS TO BE LIBERTARIAN,
VERMONT STYLE

BORN IN BROOKLYN, NEW YORK; BECAME MAYOR OF BURLINGTON, VERMONT; THEN SENATOR
SEE: https://en.wikipedia.org/wiki/Bernie_Sanders
QUOTES: He was a member of the Young People's Socialist League, the youth affiliate of the Socialist Party of America. Sanders has said he is "proud to be Jewish" but "not particularly religious." Sanders's wife is Roman Catholic and he has frequently expressed admiration for Pope Francis, saying: "the leader of the Catholic Church is raising profound issues. It is important that we listen to what he has said." Sanders often quotes Francis on economic issues and has described him as "incredibly smart and brave."
SCREAMS OF APPROVAL FOR
WOMEN'S & GAY RIGHTS,
WEALTH REDISTRIBUTION
AT A "CHRISTIAN" UNIVERSITY;
HE BEMOANS WEALTH "INEQUALITIES"
28 MINUTE VIDEO:


LIBERTARIAN TOO??? JUST NOT BELIEVABLE:
WANTS GOVERNMENT OUT OF DECIDING
WOMEN'S RIGHT TO ABORTIONS

A SOCIALIST, UNBIBLICAL PERSPECTIVE ON "FAMILY VALUES"; APPEALS TO CATHOLICS AND SOUTHERN BAPTISTS LIKE RICK WARREN WHO ARE "SLOWLY BECOMING CATHOLIC"

"RADICAL TRANSFORMATION OF CULTURE" THROUGH FIGHT FOR GAY RIGHTS

BERNIE IS PREFERRED OVER HILLARY CLINTON FOR LGBT RIGHTS

AHEAD OF HIS TIME ON CIVIL RIGHTS & ESPECIALLY GAY RIGHTS; WANTED ABOLISHMENT OF ALL LAWS AGAINST LGBT UNIONS AS FAR BACK AS THE 1960s
Published on Jul 7, 2015
Details emerged about Bernie Sanders' history as a civil rights activist. It stems all the way back to the 1960s, where he fought to end segregation. He also was a pioneer for LGBT rights back in the '70s and '80s. This demonstrates that Bernie Sanders was ALWAYS fighting for the disadvantaged and will not stop doing so even if he becomes the next president.

Is Bernie Sanders the New Age Messiah?
Published on Aug 22, 2015
Could the New Age movement use Pope Francis and the United Nations in their campaign for a New World Order? Constance Cumbey discusses how New Agers like Marianne Williamson abandoned Hillary Clinton for Bernie Sanders, the “revolutionary” socialist running for president of the U.S. The anti-Christian New Age Movement has "revolutionary aims” and spawned such groups as the “Occupy” movement, underwritten by the Tides Foundation. Cumbey’s books, including Hidden Dangers of the Rainbow (1983), sparked a backlash against the New Age movement. But the New Agers are back in a big way, working through the Democratic Party and the Sanders for president campaign. They use techniques of “altered states of consciousness” to get people into the movement. The new technique is called “mindfulness.” 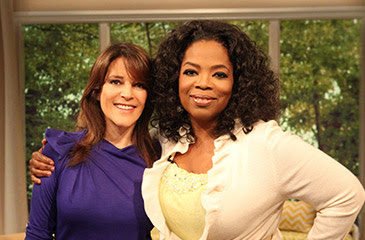 SEE: https://en.wikipedia.org/wiki/Marianne_Williamson
"According to Time magazine, "Yoga, the Cabala and Marianne Williamson have been taken up by those seeking a relationship with God that is not strictly tethered to Christianity." Williamson bases her teaching and writing on a set of books called A Course in Miracles, a self-study program of spiritual psychotherapy, based on universal spiritual themes."
EXCELLENT VIDEO: 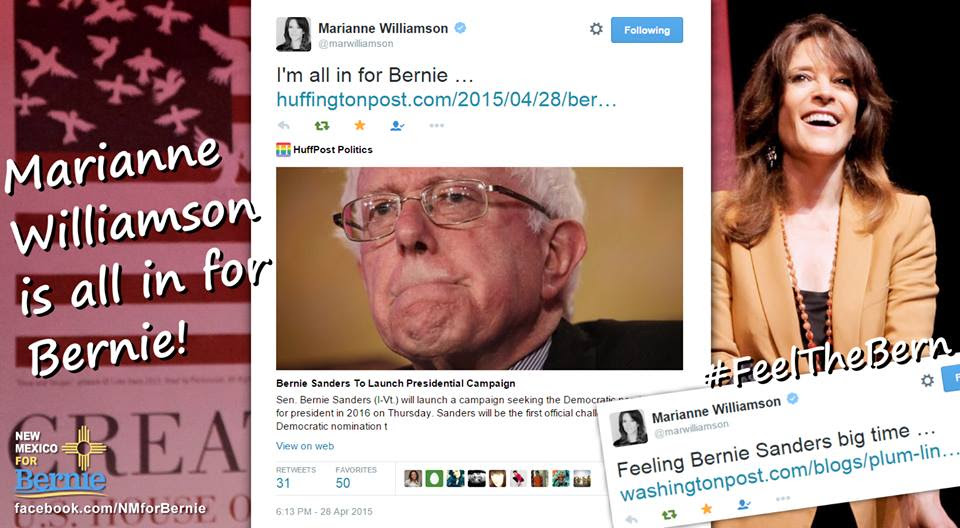 SEE: http://www.sevendaysvt.com/OffMessage/archives/2014/09/17/sanders-nemesis-to-air-tv-ad-bashing-wifes-golden-parachute;
QUOTES: "Gasoline distributor and retailer Skip Vallee, a prominent Republican fundraiser, has produced a 60-second television advertisement accusing Sanders of hypocrisy for railing against "golden parachutes" while benefiting from one himself. The ad notes that the senator's wife, Jane O'Meara Sanders, received a $200,000 severance package when she stepped down as president of the now-financially struggling Burlington College in October 2011. The ad features footage of Sanders speaking at New Hampshire's St. Anselm College in April, criticizing corporate leaders for outsourcing American jobs and then benefiting from tax breaks and "getting golden parachutes.""
THE RICH ARE STEALING FROM THE POOR; BUT HIS WIFE TOO?
_______________________________________________________
BERNIE SANDERS AGREES WITH SOCIALIST POPE FRANCIS,
CONDEMNS "CASINO" CAPITALISM (UNREGULATED):

IDENTIFIES WITH POPE'S RADICALISM
$18 TRILLION
TOWARD A SOCIALIST AMERICA:
"FREE COLLEGE" FOR STUDENTS;
"STARTS WITH A POLITICAL REVOLUTION";
"TAKE ON THE BILLIONAIRE CLASS"