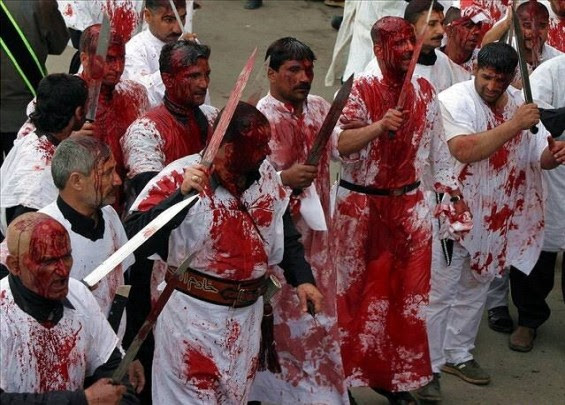 As Part of Annual Islamic Ritual

SEE: http://christiannews.net/2014/11/08/muslims-slashing-babies-heads-with-knives-as-part-of-annual-islamic-ritual/;
EXCERPT:
"In addition to cutting a gash in the forehead of children and babies, some children and adults voluntarily slash their bodies with knives or flagellate themselves with whips in order to reinact the death of Ali. One saying claims, “A single tear shed for Husayn washes away a hundred sins.” Participants are seen in some cities walking the streets with blood staining their clothing and dripping from their head, chest and back."
WARNING: VERY OFFENSIVE VIDEOS

Email ThisBlogThis!Share to TwitterShare to FacebookShare to Pinterest
Labels: Muslim 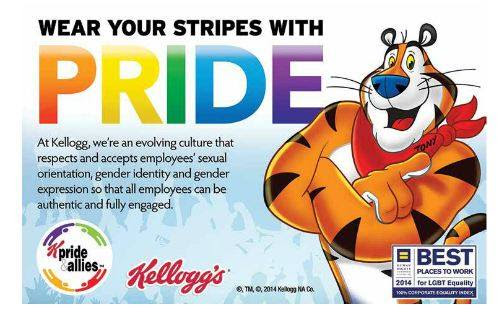 SEE: http://christiannews.net/2014/11/10/christians-outraged-as-kellogg-uses-tony-the-tiger-in-gay-pride-advertisement/;
EXCERPT:
"But Kellogg is not the first cereal company to openly express its support for homosexuality. As previously reported, in 2012, General Mills announced its support for same-sex “marriage” and its disdain for any laws that would attempt to prevent it. CEO Ken Powell appeared at a Minnesota homosexual pride event declaring his opposition for a then-proposed state constitutional amendment that would enshrine marriage as being solely between a man and a woman.
Ken Charles, General Mills’ Vice President of Diversity, also issued a letter throughout the company, outlining that he believed homosexual “marriage” would benefit employee productivity, and that if the amendment passed, it would be more difficult to retain skilled workers." 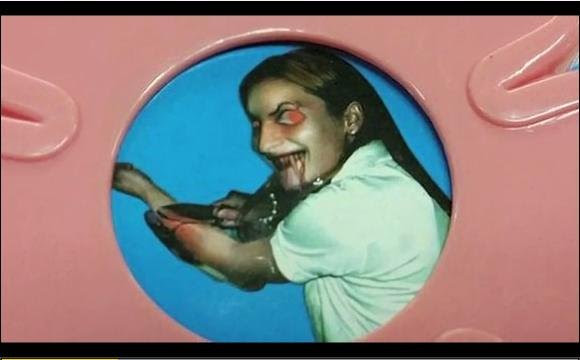 SEE: http://christiannews.net/2014/11/12/mom-finds-arm-slitting-photo-in-evilstick-wand-toy-purchased-for-toddler/;
EXCERPT:
DAYTON, Ohio – "A mother in Ohio is expressing horror after discovering that what appeared to be a pink princess wand that she purchased for her toddler at a local dollar store included a hidden photo of a girl slashing her arm with a knife."

for your kids this Christmas!:

Email ThisBlogThis!Share to TwitterShare to FacebookShare to Pinterest
Labels: Occult/Witchcraft

A FOOL FOR CHRIST?
NO, A PAWN OF THE POPE!
1 Corinthians 2:14-
"But the natural man does not receive the things of the Spirit of God, for they are foolishness to him; nor can he know them, because they are spiritually discerned." 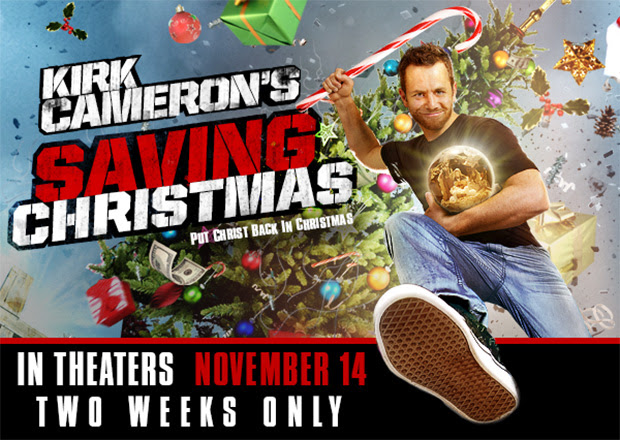 Published on Nov 14, 2014
Here are two promotional videos trying to hype up the atrociously bad 'film' Saving Christmas. The reviews are out on this film and they are pricelessly harsh. It is actually worse than I would have thought, which is saying a lot.

Kirk Cameron Raising Concerns After Coming Out
in Support of Santa Claus:
SEE: http://christiannews.net/2014/11/12/kirk-cameron-raising-concerns-after-coming-out-in-support-of-santa-claus/;
EXCERPT:
"Was Santa Claus a Christian? A ‘defender of the faith’? Is this reason to sit on the lap of the bearded man at the mall who “knows if you’ve been naughty or nice”? That is what Kirk Cameron is claiming as proof why Christians should celebrate Christmas in a new documentary that opens this Friday in theaters across the country—an assertion that is raising concerns over Cameron’s confusion of Roman Catholicism with Christianity."
_____________________________________________________________
SEE OUR PREVIOUS POST ABOUT KIRK CAMERON'S
LOVE FOR THE CATHOLIC CHURCH AND YET
CALLING HIMSELF "CHRISTIAN":

"UNCLE" KIRK CAMERON STILL PUSHING HIS OWN FORM OF CHRISTIANITY~

NOW APPROVES OF HALLOWEEN BECAUSE OF ITS CATHOLIC ORIGINS

KIRK CAMERON, SALESMAN FOR
"THE UNFRUITFUL WORKS OF DARKNESS"
EPHESIANS 5:11
ECUMENICAL COMPROMISE
"BORN AGAIN CHRISTIAN PATRIOT" & WOULD BE APOLOGIST
SAW NOTHING WRONG WITH GLENN BECK'S MORMONISM;
NOW FINDS NO FAULT WITH PAGAN CATHOLICISM AS THE
SOURCE OF HALLOWEEN
http://ratherexposethem.blogspot.com/2014/11/uncle-kirk-cameron-still-pushing-his.html

FROM: http://the-trumpet-online.com/gruber-4th-video-obama-stupid/
"Yet another video has surfaced of Massachusetts Institute of Technology professor Jonathan Gruber, who was paid hundreds of thousands of dollars for consulting on Obamacare and has stated that he counted on the “stupidity” of Americans for the law to be adopted, but this one shows he puts Barack Obama in a different league.
In this, Gruber, who teaches in the school’s economics department, said, “Now Barack Obama’s not a stupid man.”
His comment was in the context of Obama knowing that “the American public doesn’t actually care that much about the uninsured.”
That’s why, he said, although the Obamacare legislation was 90 percent about health insurance coverage and 10 percent about cost control – all the American public heard was about that cost control.
There has been a firestorm stirred up around Gruber’s comments as several videos have surfaced of his opinion of the American public: “Stupid,” “Stupid,” and they don’t really comprehend. He was talking about the strategies used by the Obama administration to push Obamacare into law.
He has praised the deceptive maneuvering by the Obama administration and said it was well worth it because he wanted the law.
It brought a reaction from Fox News’ commentator Charles Krauthammer that his comments prove that those who opposed Obamacare were correct all along."
Read more at http://www.wnd.com/2014/11/voters-stupid-prof-says-obama-is-different/#A4Gsdxz7bVEqZY7R.99
___________________________________________________________________


All of #GruberGate in Two Minutes:


Published on Nov 14, 2014
Affordable Care Act architect Jonathan Gruber describes how its authors used deception to describe a new tax on high-end insurance plans scheduled to go into effect in 2018. New clips of Gruber from 2011 have surfaced and are adding more ammunition to Republicans in their fight against the law. Nancy Cordes reports.

At Meeting With CBO Director:

Published on Nov 14, 2014
MIT Professor Jonathan Gruber just can’t keep his mouth closed. A fourth video solidifying the relationship between him and the Obama Administration has now surfaced. What follows is a compendium of brazen directives to undermine the American people. His treasonous cult like zeal for the financial burden he and others campaigned into the lives of the average citizen should be viewed by everyone in this country. The video speaks for itself.
http://www.infowars.com/grubers-goobe...

"Too Stupid to Understand" the Plan:

GRUBER: "We all know it's really a tax on people.":

Fox Anchor: CNBC ‘Silenced’ Me For Reporting On Obamacare:

Francis highlighted Obamacare architect Jonathan Gruber’s comments about the “stupidity” of American voters and the administration intentionally misleading the public about what’s in the law and said in her experience, some of the media helped to hide the truth about the law.

“It’s shocking, but it doesn’t surprise me because when I was at CNBC, I pointed out to my viewers that the math of Obamacare simply didn’t work,” Francis said Friday. “Not the politics by the way, but just the basic math. And when I did that, I was silenced.”