BORDER WALL IS AN INEFFECTIVE WASTE, DEMOCRATS SAY~ HERE'S THE REAL WASTE
BY R. CORT KIRKWOOD
SEE: https://www.thenewamerican.com/usnews/politics/item/31164-border-wall-is-an-ineffective-waste-democrats-say-here-s-the-real-waste?vsmaid=2898&vcid=3987;
Besides their false claim that a wall on the southern border of the United States would be “ineffective,” Democrats oppose a wall because it would “waste” taxpayer money.
Thus, they adamantly refused to provide money for a wall in the spending bill the House passed and the Senate didn’t.
Yet amazingly, the Democrats found plenty of money to fund for pet projects that provide no benefit to the American citizen whatsoever.
The list is long — and instructive. For Democrats, the end game is this: wasting money and open borders.
What They Will Fund
As the Office of Management and Budget noted of the Democratic spending bill passed in early January, “despite not meeting the minimum requirements identified by those who are directly responsible for the Nation’s border security, this package funds a number of unnecessary programs at excessive levels well beyond what was put forward in the FY 2019 Budget.”
The Democrats want “funding at levels nearly 20 percent higher than the President’s FY 2019 Budget,” the OMB reported.
Among the goodies the open-borders Democrats want are $12 billion more for international affairs programs, or 29 percent more than the president wanted. That includes $2.9 billion more for economic and development assistance to foreigners in the Middle East.
Why funding to Israel, Syria, and Pakistan is more important the security at the southern border of our own country is a mystery, as is the “$700 million more than requested for the United Nations, including restoring funding for the United Nations Population Fund.”
Of course, that funding contains money, OMB observed, that would “undermine the President’s Mexico City Policy ... which prohibits the funding of foreign nongovernmental organizations that promote or perform abortions.”
The House bill also included “$2 billion in excessive Environmental Protection Agency funding, providing funds beyond the Agency’s core mission and including funding for programs that can and should be executed at the local level.”
More unnecessary — and blatantly unconstitutional — spending includes $7.1 billion for “rental assistance programs” in the Housing and Urban Development Department, itself a massive unconstitutional agency.
And those are just the worthless programs OMB mentioned.
More Waste, Unconstitutional Spending
Citizens against Government Waste unearths much ridiculous and unconstitutional spending in its annual Prime Cuts Summary.
Among programs that are expending money that could be used to defend the border are these, which the summary reported in September just weeks before the border-wall fight began:
• Scrapping one program alone, the Rural Electrification Administration, could fund nearly two walls. Cutting the REA for one year would save $8.2 billion, or $41 billion through the next five years. Given that just about 100 percent of rural America now has electricity and phone service, why does Congress continue funding a program born in 1935?
• Stopping improper Medicare payments, the summary shows, would save $3.6 billion annually, or $18.1 billion through the next five years, or almost three times what the president wants for border security.
• Returning to HUD, eliminating Community Development Block Grants — again, unconstitutional spending — would save $3 billion annually.
• The United States contributes $10 billion annually to the anti-American United Nations, the creation of communists and one-worlders after World War II. UN funding should be cut entirely, but even knocking the U.S. contribution back 25 percent would save $2.5 billion.
• Eliminating sugar subsidies, the summary reports, would save $1.2 billion annually, while cutting dairy and peanut subsidies would save almost $300 million.
Annual savings on these programs? $18.8 billion. That’s enough to build three walls and return $1.7 billion to taxpayers.
Pelosi’s Lie
In her speech on Tuesday night that did not refute a single word of President Trump’s remarks from the Oval Office, House Speaker Nancy Pelosi claimed that he will not agree to a bill to reopen the government “over his obsession with forcing American taxpayers to waste billions of dollars on an expensive and ineffective wall.”
If the wall would be ineffective, perhaps Pelosi and her partner in immigration crime, Senate Minority Leader Chuck Schumer, can explain why Israel built a (very effective) wall, and why Democrats continue voting to send foreign aid to Israel given that walls are a “waste” and “ineffective.”
And perhaps they can explain why they are “forcing American taxpayers to waste billions of dollars on ... expensive and ineffective” programs that benefit no one.
They can’t. And won’t.
They have two priorities, the first of which is sending tax money to their coalition of angry, anti-American special interests.
But the second, and more important to the wall debate, is this: Keeping the borders open to bring in future Democratic voters.

VICTIMS OF ILLEGAL IMMIGRATION VS. GOVERNMENT WORKERS NOT GETTING THEIR PAYCHECKS DRUG CARTELS AT SOUTHERN BORDER FUNDING DEEP STATE & DEMOCRATS WITH BRIBES, EXTORTIONS TOWARDS IMPEACHING TRUMP
MILLIE WEAVER OF INFOWARS REPORTS
MSM is distracting the American people from the real dangers along the southern border, while money from drug trafficking is being used to fund deep state operations in the U.S. Millie Weaver joins Alex to expose the lying fake press that promotes the cartels agenda.
Posted by John at 9:09 AM 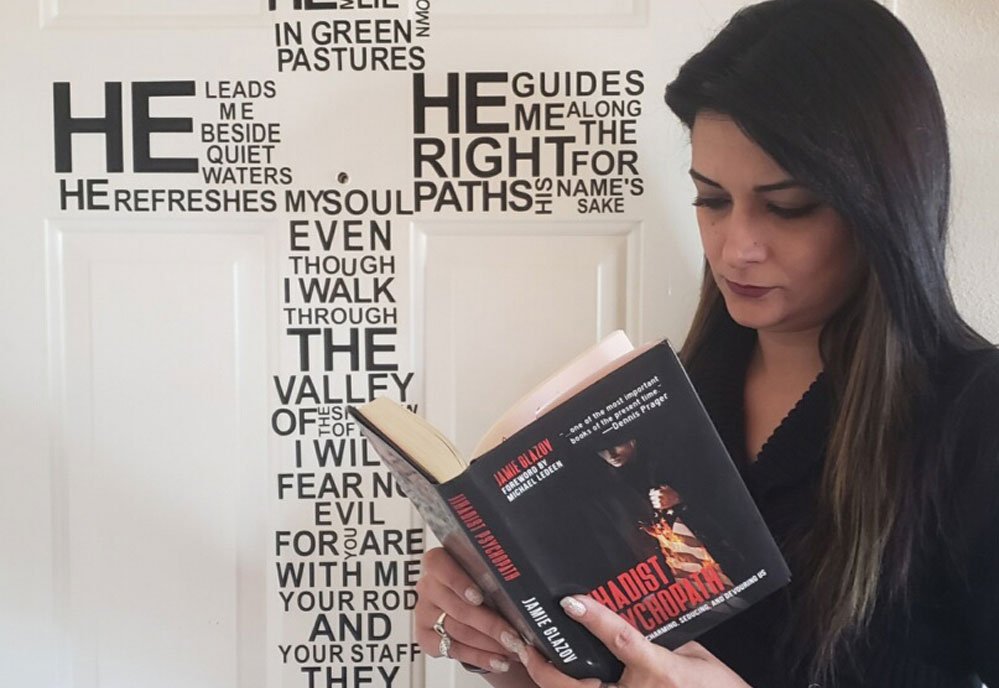 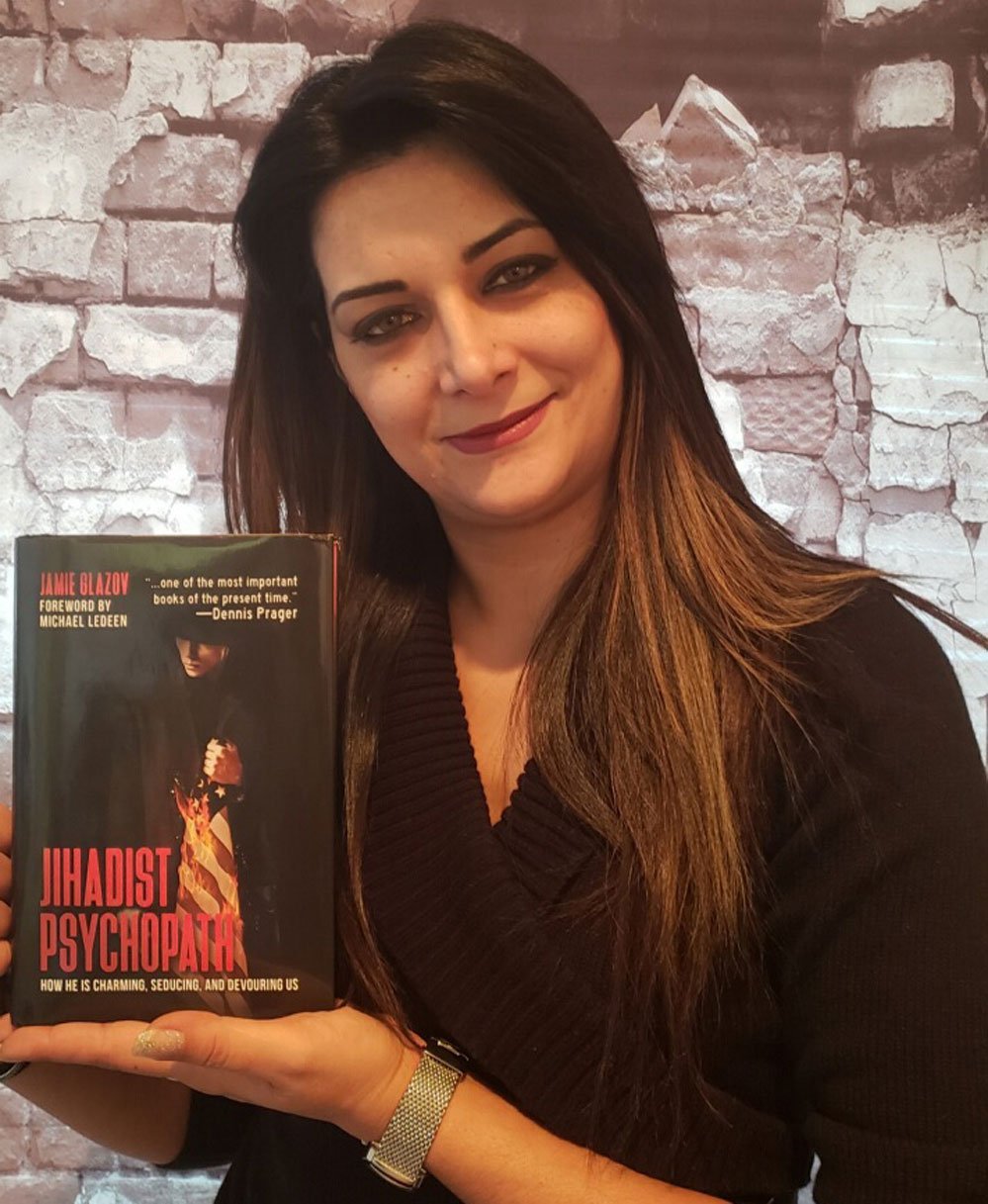 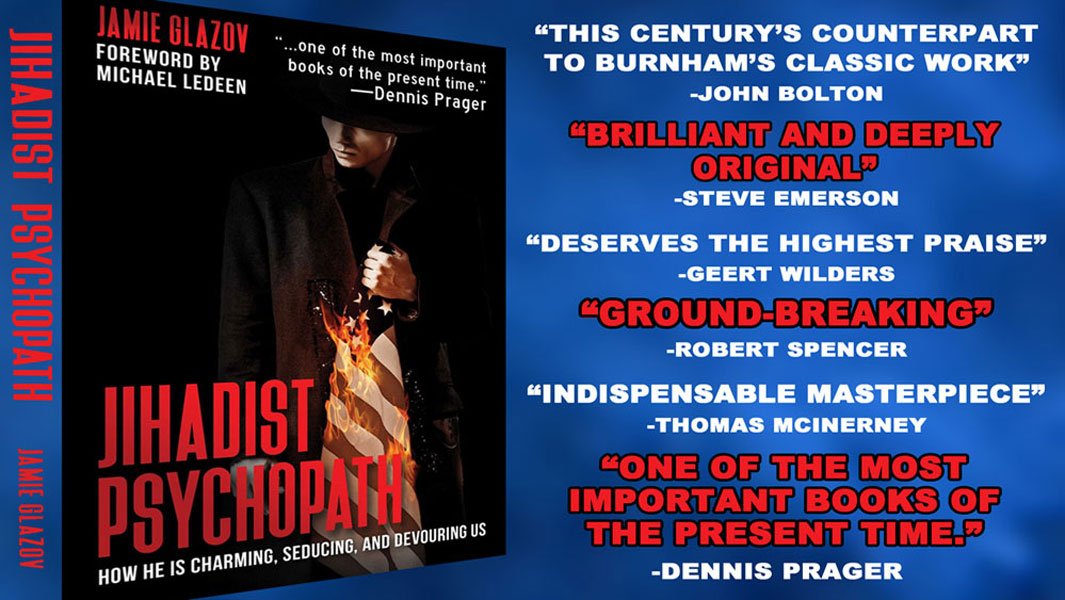 AYNAZ ANNI CYRUS, EX-IRANIAN MUSLIM CALLS JAMIE GLAZOV'S NEW BOOK "JIHADIST PSYCHOPATH" A "MASTERPIECE"
BY JAMIE GLAZOV
SEE: https://www.jihadwatch.org/2019/01/ex-muslim-calls-glazovs-jihadist-psychopath-a-masterpiece;
In this new Glazov Gang episode, Ex-Muslim Anni Cyrus Calls Jamie Glazov’s “Jihadist Psychopath” a “Masterpiece.”
As a Sharia survivor, she says that the book deciphers the Jihadist seduction/terror gambit dead on.
Don’t miss it!
[Jamie Glazov will be speaking at Beverly Hills Hotel on Feb. 6 about his new book: Jihadist Psychopath: How He Is Charming, Seducing, and Devouring Us. Register HERE. Order the book HERE.]
Subscribe to the Glazov Gang‘s YouTube Channel and follow us on Twitter: @JamieGlazov.
Please donate through our Pay Pal account.
Posted by John at 8:45 AM

HORROR AT GROUND ZERO, NYC REVISITED: GIANT SCULPTURE PROCLAIMING "THERE IS NO GOD BUT ALLAH & MUHAMMAD IS HIS PROPHET" INSTALLED~MAKES A MOCKERY OF ALL THOSE KILLED BY JIHADISTS

NYC: Giant sculpture proclaiming “There is no god but Allah and Muhammad is his prophet” goes up at Ground Zero

republished below in full unedited for informational, educational and research purposes:

Said Jenkell: “Given the unique and justified sensitivities surrounding the World Trade Center, it came to my mind to propose to remove the sculpture showcasing the flag of Saudi Arabia, or relocate it to a less sensitive location. But there is no way I can do such a thing as the flag of Saudi Arabia is entirely part of the G20 just like any other candy flag of this Candy Nations show.”

City officials should move it. Would a giant sculpture containing Shinto inscriptions be put up at Pearl Harbor? But nothing will be done about this. To move it would be “Islamophobic,” and the de Blasio administration would rather have its teeth pulled out with rusty pliers than do anything that might even give the appearance of “Islamophobia.” 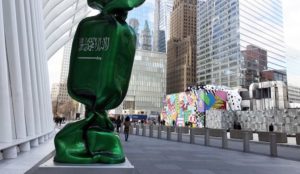 “A Sculpture Celebrating Saudi Arabia Has Been Erected on Ground Zero,” by Davis Richardson, Observer, January 9, 2019 (thanks to The Religion of Peace):


A sculpture celebrating Saudi Arabia’s place in the G20 Summit was erected on the World Trade Center grounds last week, a stone’s throw away from the 9/11 memorial.
Shaped to resemble a piece of candy, the nine-foot-tall statue bears the Kingdom’s emerald flag emblazoned with the Arabic inscription, “There is no god but Allah, and Mohammed is the prophet.”

It was created by French sculptor Laurence Jenkell in 2011 as part of the larger installation “Candy Nations” which depicts G20 countries as sugary delights….
“I first created flag candy sculptures to celebrate mankind on an international level and pay tribute to People of the entire world,” Jenkell told Observer in a statement. “Given the unique and justified sensitivities surrounding the World Trade Center, it came to my mind to propose to remove the sculpture showcasing the flag of Saudi Arabia, or relocate it to a less sensitive location. But there is no way I can do such a thing as the flag of Saudi Arabia is entirely part of the G20 just like any other candy flag of this Candy Nations show.”
The installation was curated and installed by the Port Authority of New York and New Jersey….
Although the installation was originally created in 2011 to convey “an optimistic message of unity beneath external differences,” its placement at the World Trade Center raises questions given longstanding accusations directed toward Saudi Arabia in the aftermath of the September 11 attacks. In 2003, hundreds of families affected by the 9/11 terror attacks sued the Kingdom over its alleged involvement in harboring terrorism—given that 15 of the 19 hijackers were Saudi.
Last March, a U.S. federal judge rejected Saudi Arabia’s motion to drop the charges.

A Sculpture Celebrating Saudi Arabia Has Been Erected on Ground Zero

This statue representing Saudi Arabia is just one of 20 nations featured in artist Laurence Jenkell’s ‘Candy of Nations.’ Davis Richardson, Observer
A sculpture celebrating Saudi Arabia’s place in the G20 Summit was erected on the World Trade Center grounds last week, a stone’s throw away from the 9/11 memorial.
Shaped to resemble a piece of candy, the nine-foot-tall statue bears the Kingdom’s emerald flag emblazoned with the Arabic inscription, “There is no god but Allah, and Mohammed is the prophet.” It was created by French sculptor Laurence Jenkell in 2011 as part of the larger installation “Candy Nation” which depicts G20 countries as sugary delights, and has since been featured in over 25 countries. All 20 sculptures are currently on display outside the Oculus shopping center.
The installation was curated and installed by the Port Authority of New York and New Jersey. When reached for comment, the organization pointed Observer to a December press release announcing the exhibit.

| By Paul Sperry, New York Post, December 15, 2013
After the 9/11 attacks, the public was told al Qaeda acted alone, with no state sponsors.
But the White House never let it see an entire section of Congress’ investigative report on 9/11 dealing with “specific sources of foreign support” for the 19 hijackers, 15 of whom were Saudi nationals.
It was kept secret and remains so today.
President Bush inexplicably censored 28 full pages of the 800-page report. Text isn’t just blacked-out here and there in this critical-yet-missing middle section. The pages are completely blank, except for dotted lines where an estimated 7,200 words once stood (this story by comparison is about 1,000 words).
A pair of lawmakers who recently read the redacted portion say they are “absolutely shocked” at the level of foreign state involvement in the attacks.
Reps. Walter Jones (R-NC) and Stephen Lynch (D-Mass.) can’t reveal the nation identified by it without violating federal law. So they’ve proposed Congress pass a resolution asking President Obama to declassify the entire 2002 report, “Joint Inquiry Into Intelligence Community Activities Before and After the Terrorist Attacks of September 11, 2001.”
Some information already has leaked from the classified section, which is based on both CIA and FBI documents, and it points back to Saudi Arabia, a presumed ally.
The Saudis deny any role in 9/11, but the CIA in one memo reportedly found “incontrovertible evidence” that Saudi government officials — not just wealthy Saudi hardliners, but high-level diplomats and intelligence officers employed by the kingdom — helped the hijackers both financially and logistically. The intelligence files cited in the report directly implicate the Saudi embassy in Washington and consulate in Los Angeles in the attacks, making 9/11 not just an act of terrorism, but an act of war.