MAINE: MUSLIM POLICE OFFICER PUT ON LEAVE, CHARGED WITH FIVE MISDEMEANORS, INCLUDING ASSAULT & BATTERY
BY ROBERT SPENCER
SEE: https://www.jihadwatch.org/2018/01/maine-muslim-police-officer-put-on-leave-charged-with-five-misdemeanors-including-assault-and-battery;
Mohamed Noor, the Muslim cop in Minneapolis who shot an unarmed woman, Justine Damond, had been fast-tracked onto the force so that the Minneapolis police could showcase their “diversity.” Now it looks as if the Portland, Maine Police Department was trying to do the same thing with Zahra Munye Abu. After the shooting of Justine Damond, there should have been a searching reevaluation of the wisdom of hiring police officers based on their religion and ethnicity rather than their merit. But of course there was not. And so Muslim police officers keep being hired because they’re Muslim, not because they’re competent police officers, and here we are again. 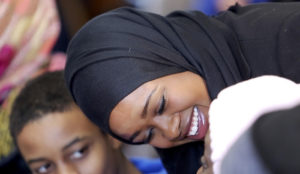 “Portland police officer whose hiring made history is put on leave after arrest in Massachusetts,” by Matt Byrne, Press Herald, January 16, 2018 (thanks to the Geller Report):


A 24-year-old Portland police officer has been charged with five misdemeanors, including assault and battery, after being arrested Saturday night at a concert venue in Worcester, Massachusetts.
Worcester police said Zahra Munye Abu, of Portland, is also facing charges of trespassing, resisting arrest, disorderly conduct and disturbing the peace.
Abu caused a disturbance while attending a Ja Rule and Ashanti concert at the Palladium Nightclub on Main Street, said Worcester police Sgt. Kerry F. Hazelhurst.
“The nightclub was hosting several live musical acts,” Hazelhurst said in an email. “She was (given) several opportunities to leave and refused. Eventually she was placed under arrest.”
Worcester police would not provide more details about the incident, and members of Abu’s family declined to comment when contacted by phone at their home.
Portland Police Chief Michael Sauschuck said Abu has been placed on administrative leave with pay pending a review of the matter….
Abu is a high-profile member of the Portland police force because she is the first member of Maine’s Somali immigrant community to become a police officer in Maine.
She was born to Somali parents in a Kenyan refugee camp and has lived in Portland since she was 2 years old. She graduated from Deering High School in Portland and studied criminal justice and women-and-gender issues at the University of Southern Maine.
If convicted, Abu faces a maximum penalty of up to 2½ years in a county jail on the assault and battery and the resisting arrest charges. Each of the other charges include less severe maximum penalties. LIBERAL NEW JERSEY GOVERNOR IGNORES PENSION CRISIS, WANTS MORE SPENDING
BY BOB ADELMANN
SEE: https://www.thenewamerican.com/usnews/politics/item/28053-new-jersey-governor-ignores-pension-crisis-wants-more-spending;
While running for governor of New Jersey, Democrat Phil Murphy (shown) was asked what he would do about the state’s overwhelming pension crisis, and he waffled: there’s “no easy answer," he said. He added that the state would have to do something about the problem. Said Murphy, “The state has to stand up for its side of the bargain. Period. If the state doesn’t, there’s no use in having [any further] discussion.”
Murphy was inaugurated as the New Jersey’s 56th governor on Tuesday and promptly forgot all about the pension tsunami about to engulf the state. Instead he offered both a “wish list” and a “to-do list" for his supporters and Democratic legislators in attendance. His “wish list” contained the usual collection of liberal promises, while his “to-do” list is what he wants the state legislature to bring to his desk within the next 30 days.
His “wish list” was a rehash of his campaign promises — long on generalities but short on specifics — including legalizing marijuana, protecting illegal immigrants from ICE, providing free tuition at the state’s community colleges, eliminating “tax breaks” that large corporations are allegedly unfairly enjoying, investing state funds in more costly “green energy” projects, and paying for it all by raising taxes on those few millionaires still residing in one the country’s highest-tax states.
He was much more specific with his “to-do” list. He ordered the state’s liberal and heavily Democratic legislators to get off the snide and send him six bills within the next 30 days, each of which, said Murphy, “will be met with a signing ceremony.” Their marching orders from Murphy included new funding for “women’s health” and Planned Parenthood, raising the minimum wage in the state to $15 an hour, mandating “equal pay” for women, requiring employers in the state to provide paid sick leave to their employees, passing laws removing barriers to having illegals vote, and, of course, additional attacks on the state’s more than three million law-abiding gun owners.
He mentioned not a word about the state’s pension crisis, which has been brewing for years and accelerating nearly exponentially. It’s not that Murphy doesn’t know about the crisis or its extent and potential for bankrupting the state. In 2005, acting New Jersey Governor Richard Codey convened a commission to study “the problem,” naming Phil Murphy as its head. In its conclusion, that study urged the state in no uncertain terms to end immediately all “pension holidays” (the skipping of payments to the state’s five pension plans for a period of time), to avoid actuarial “gimmicks” commonly used to make those liabilities appear to be smaller than they actually are, and to eliminate borrowing to pay the state’s contributions. It also recommended a series of reforms, including an end to pension “spiking” (by which employees can sweeten their final payouts as they approach retirement), and raising the age at which plan beneficiaries could retire with full benefits. That last recommendation, which was never implemented, would have raised the full-benefit retirement age from 55 to 60.
So Murphy cannot claim ignorance. He is also certain to know of the accounting chicanery that took place last year, i.e., using the state’s lottery program to help pay the state’s pension contributions. But it was chicanery taken to level of audacity rarely seen even in states as corrupt as New Jersey. Instead of demanding that the lottery’s annual $1 billion proceeds flow into the pension funds’ coffers, the legislature actually transferred the entire program into those coffers and then declared that the future value of those annual proceeds (happily and likely generously estimated at more than $13 billion) was now an asset, reducing (on paper at least) the amount of the unfunded liability.
Moody’s Analytics was not impressed: “The lottery transfer does not change the state’s weak [and] steeply rising pension contribution schedule. [Even after the transfer] there remains considerable risk that the state will be unable to afford rapidly growing pension contributions.”
Also not impressed were two senior fellows at the Manhattan Institute, who just released their study of New Jersey’s pension problems. In January, well before Murphy neatly demurred on even mentioning them, the authors concluded: “It is highly unlikely that New Jersey will generate enough new revenues to meet its pension obligations without severely hobbling the rest of the state’s budget. At the same time, allowing its pension system to continue to accumulate debt by not contributing adequately to it will push New Jersey toward a potentially catastrophic failure of its government pensions.”
At the moment, those five government pension plans have the lowest funding ratio of any state in the union, with a liability estimated to be $124 billion. Those plans are only 30-percent funded currently and declining with each passing day.
But Murphy’s term is for only four years, and if he wins reelection, his tenure ends in eight years. Those plans will likely remain in place, continuing to threaten pensioners who still think they will be getting their benefits, and threatening the state with bankruptcy if it tries to fund them properly. But Murphy will be long gone, proving once again the old adage: Politicians come and go, but the unfunded promises they make live long after them.

Posted by John at 2:24 PM Links to this post

"SHE DECIDES" WHEN TO TERMINATE LIFE; AND APOSTATE GLOBALIST/SOCIALIST ANTI-CHRIST POPE GIVES BLESSING & HONOR
TO APOSTATE LIKE HIMSELF SEE: http://www.breitbart.com/national-security/2018/01/17/pope-francis-honors-dutch-abortion-activist-with-pontifical-medal-of-knighthood/;
In an email to the Catholic Herald, Ms. Ploumen said that she was “very honoured” by the pontifical medal, which was sent via the Dutch Ministry of Foreign Affairs last month.
In an interview with Dutch radio, Ploumen said she views the honor as a sign of the pope’s progressivism, as well as acknowledgement for her work in supporting abortion rights.
Ms. Ploumen said that the award came after much personal investment in contacts with the Vatican, which she defined as “lobbying.”
“Yes, because you know, the Vatican, especially under prior popes, had a rather rigid attitude when it came to the rights of girls and women,” she said.
The Order of St Gregory the Great was founded by Pope Gregory XVI in 1831, under the patronage of Pope St Gregory I. It is bestowed on those who have distinguished themselves in public service or given support to the Church.
During the investiture ceremony, the prelate sponsoring the candidate recites a formula noting that membership in the Pontifical Order of St Gregory the Great “is conferred as a reward for services to the Holy See and the Church on gentlemen/ladies of proved loyalty who must maintain unswerving fidelity to God, the Supreme Pontiff, the Holy See and the Church.”
“Becoming a Knight/Dame does not merely mean receiving a title of honour—even though it is well deserved—but fighting evil, promoting good and defending the weak and oppressed against injustice,” the rite continues.
The approval of candidates for this high honor must be given by the pope himself.
The Vatican press office has confirmed that the honor was indeed awarded to Lilianne Ploumen, but insists that it was not meant to signal approval of her pro-abortion activities.
On Monday, Paloma García Ovejero, deputy spokesperson of the Holy See Press Office, said the medal was part of an exchange of honors between delegations after she took part in an official state visit to the Vatican last year of Dutch King Willem-Alexander and Queen Maxima.
“The honor of the Pontifical Order of St. Gregory the Great received by Mrs. Lilianne Ploumen, former Minister of Development, in June 2017 during the visit of the Dutch Royals to the Holy Father, responds to the diplomatic practice of the exchange of honors between delegations on the occasion of official visits by Heads of State or Government in the Vatican,” García said.
“Therefore, it is not in the slightest a placet [a mark of approval] to the politics in favor of abortion and of birth control that Mrs. Ploumen promotes,” she added.
According to the National Catholic Register, abortion is just one area where Ploumen’s public advocacy departs from Catholic moral teaching.
As “a radical supporter of homosexual rights,” Register correspondent Edward Pentin states, Ploumen “urged homosexuals to disrupt Mass in a Dutch cathedral after an openly homosexual man was denied Holy Communion” in 2010.
Last September, Ploumen also gave a prominent address at the LGBT’s Core Group at the United Nations.
For his part, Pope Francis has been an outspoken critic of abortion, calling it a “very grave sin” and a “horrendous crime.”
______________________________________________________