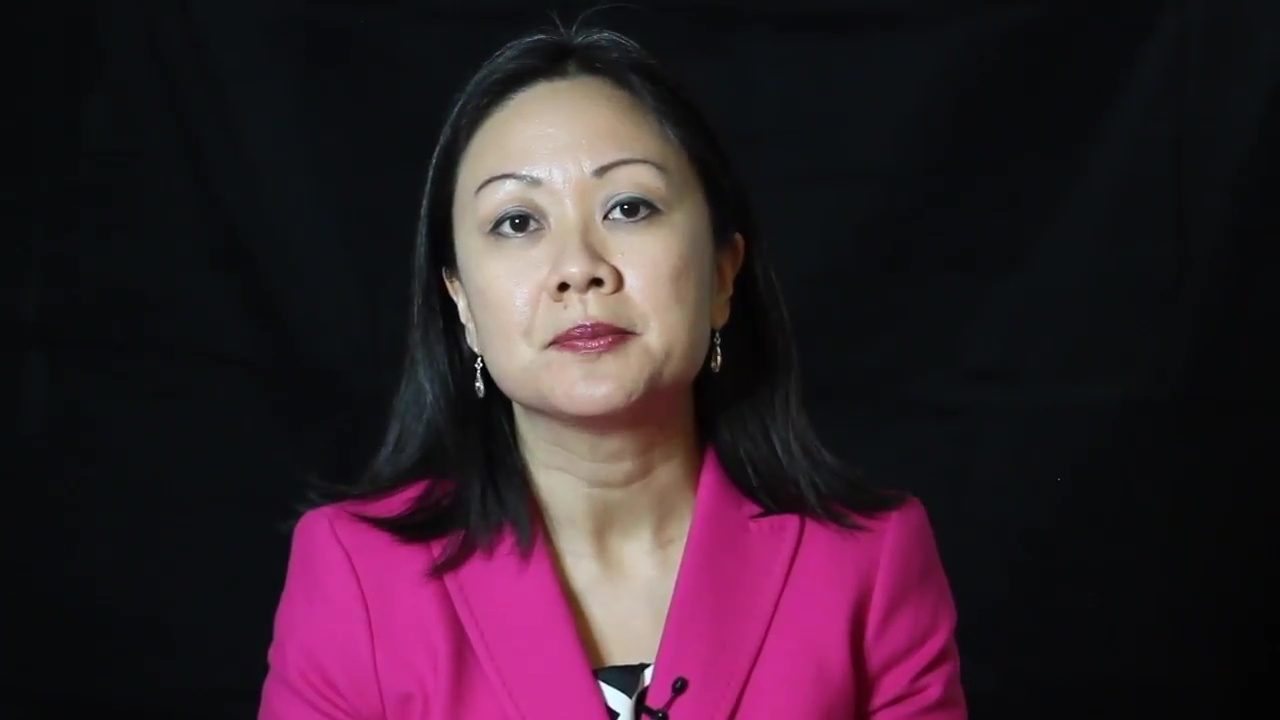 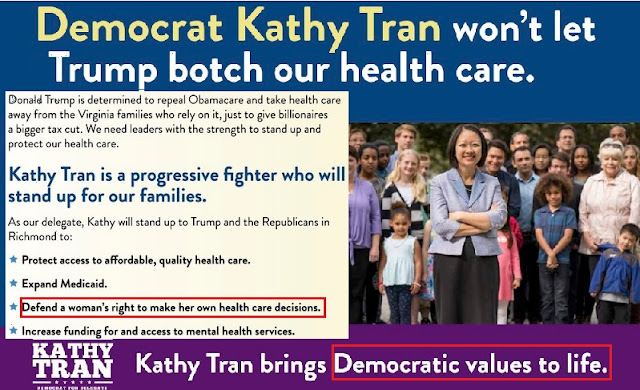 Main article: Repeal Act (Virginia)
On the first day of the 2019 legislative session, Tran introduced the Repeal Act, a bill that would broaden the circumstances under which women in Virginia can receive late-term abortions. Tran's bill would allow third-trimester abortions to occur if a single physician determines that continued pregnancy would pose any risk to a woman's physical or mental health. Currently, Virginia law states that such abortions are only legal if three physicians agree that continued pregnancy would pose "substantial and irremediable danger" to a woman's health. The Repeal Act would also allow second-trimester abortions to be performed in clinics instead of hospitals and would remove the requirement that an ultrasound be performed before an abortion.
While testifying in the House of Delegates, Tran said that her bill would maintain Virginia's current law allowing third-term abortions to occur up to the point of dilating, which was accused by Republicans of allowing legal infanticide. Tran's bill would not allow abortions to be performed as the fetus is entering a woman's birth canal. Although Tran's bill failed to pass the state legislature, video of her testimony went viral after being shared by conservative media outlets. Tran suspended her social media accounts in response to threats against herself and her family. She said that she misspoke, and that when asked about when a woman is dilating, she should have said, "Clearly, no, because infanticide is not allowed in Virginia, and what would have happened in that moment would be a live birth."
_________________________________________________________

"STANDING UP FOR WOMEN" SEE: https://www.kathyfordelegate.com/womens-rights
EXCERPTS:
"The fight for women’s equality has defined America. While we have made great strides, we have far to go. Women continue to face gender-based discrimination and violence. We continue to be underrepresented in critical areas, including in in-demand industries that can lead to better prosperity for ourselves and our families, and elected and appointed office. Kathy will continue the fight for women’s equality in Virginia – all of Virginia prospers when women are treated equally, when women thrive economically, and when women are free from violence.
Kathy will oppose any attempt by politicians to interfere in a woman’s right to make decisions about her own body. She will fight against any proposed legislation that would impose medically unnecessary restrictions on reproductive health care providers or limit the ability of a woman to make the best decision for her health with her doctor."

TO SAVE CATERPILLARS ON SAME DAY AS

BY WILLIAM DAVIS
SEE: https://dailycaller.com/2019/01/31/kathy-tran-caterpillars-same-day-abortion/; republished below in full unedited for informational, educational and research purposes:
The Democratic Virginia delegate who has recently come under fire for sponsoring a bill in the Virginia House of Delegates that would allow the termination of a pregnancy up to 40 weeks old, is also the chief patron of a bill that would protect the lives of “fall cankerworms” during certain months.
Democratic Virginia Del. Kathy Tran introduced “House Bill No. 2495 – Fall cankerworm; spraying prohibited during certain months” on Jan. 9, the same day as “House Bill No. 2491 — Abortion; eliminate certain requirements.”
Tran came under fire Tuesday for her support of legislation that would allow an abortion to be performed just moments before the birth of a child. (RELATED: VA Considering Bill Legalizing Abortion Until 40 Weeks In Pregnancy) 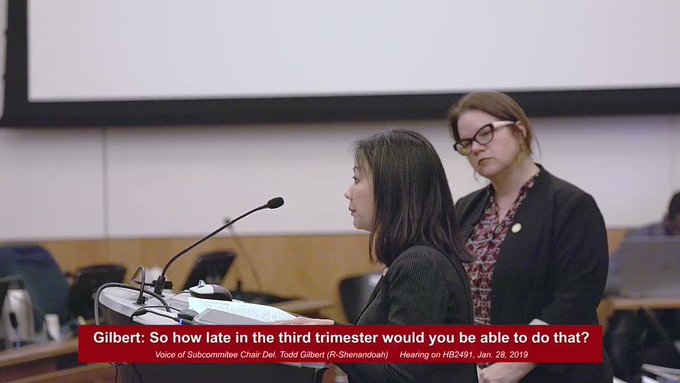 Todd Gilbert (R): Where it’s obvious a woman is about to give birth...would that be a point at which she could still request an abortion?

Kathy Tran (D): My bill would allow that, yes


11.7K people are talking about this


“Where it’s obvious a woman is about to give birth…would that be a point at which she could still request an abortion?” Republican Del. Todd Gilbert asked Tran. (RELATED: Trump Rips Virginia Democrats On Abortion Comments)
“My bill would allow that, yes,” she confirmed.
Tran’s other piece of legislation aims to protect insects such as “gypsy moths” and “cankerworms.”
According to Virginia’s Legislative Information System, House Bill No. 2495 is:

Tran apparently deleted all of her social media following backlash to her abortion bill.

What do an unborn baby in the third trimester and Delegate Kathy Tran's Twitter account have in common?


241 people are talking about this 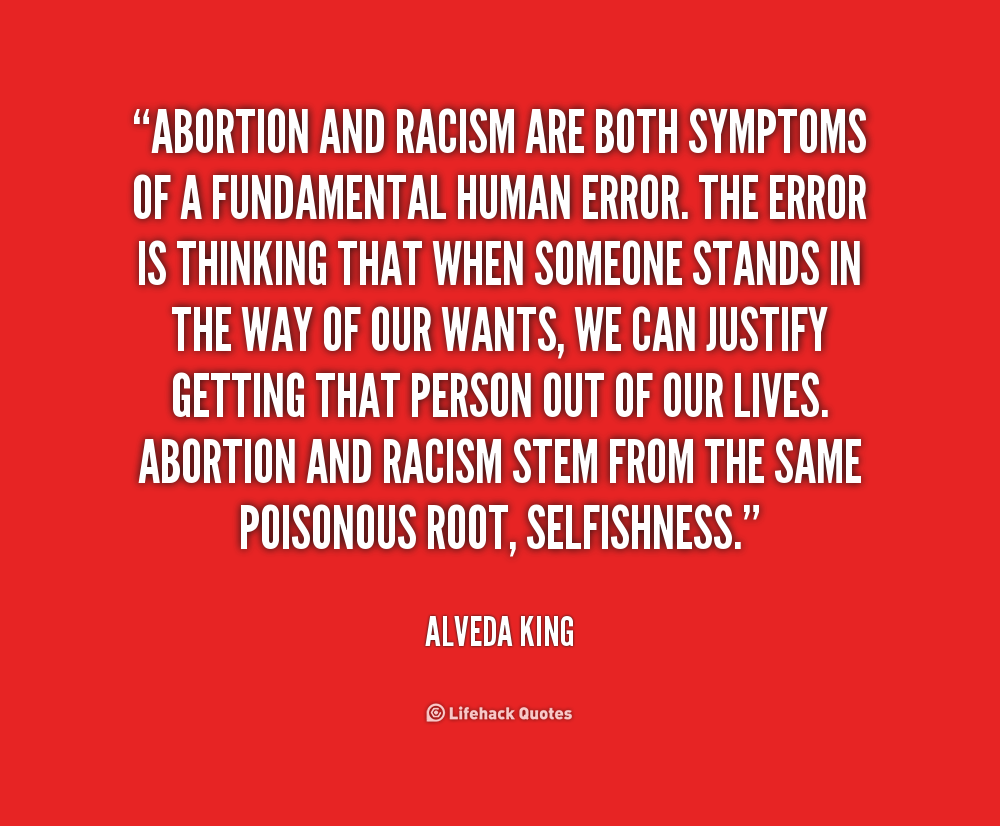 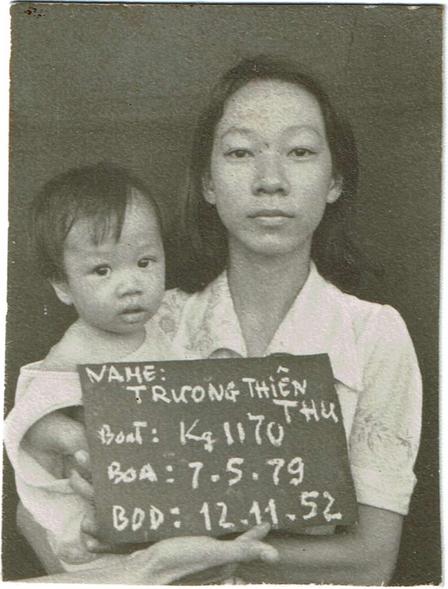 Mark Levin on Kathy Tran’s ‘abortion’ bill “this is a murder bill”
MUST SEE: For $17,000-How Easy It Is To Schedule Abortion
At Nine Months Pregnant!
Infowars Reporter Millie Weaver challenges the Democrat talking point that "late-term abortions are only available for medical emergencies" by showing she was able to schedule an abortion appointment in her 9th month of pregnancy simply using the vague excuse of depression.
Jeanine Pirro Rips Cuomo & Northam a New One
Pro-Life Rally to Stop Abortion Extremism in Virginia
Lila Rose on Fox debating New York's Abortion Law

THE TRUTH BEHIND THE NEW RADICAL ABORTION LAWS

BY GREG REESE
SEE: https://www.infowars.com/the-truth-behind-the-new-radical-abortion-laws/; republished below in full unedited for informational, educational and research purposes:
Infowars’ Greg Reese presents a special report exposing the truth behind the latest Democrat abortion laws causing controversy nationwide.
Learn how the left is assisting Planned Parenthood and making sure the abortion industry will survive if Roe v. Wade is repealed. 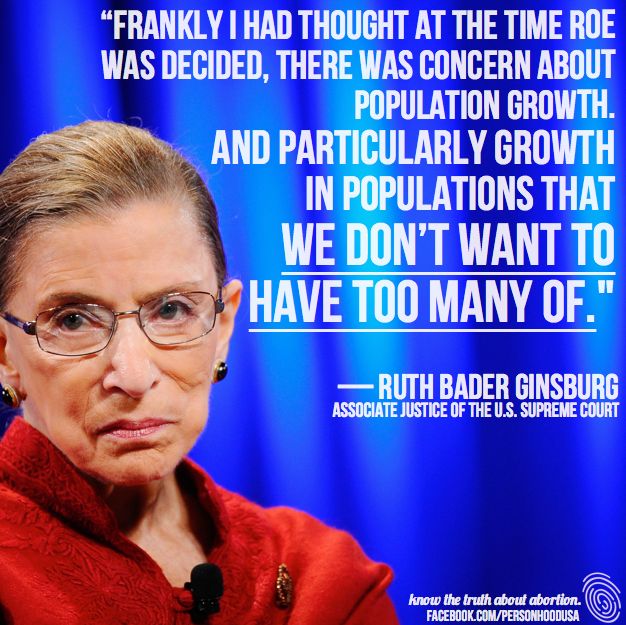