On a highway overpass in Missouri, several highway patrol police cars showed up and a group of police demanded that the Impeach Obama demonstration cease, but they could not cite any law or ordinance broken, claiming they didn't have to give a legal reason. They ignored the demonstrators claims for the constitutional rights of assembly and free speech. They arrested them and cuffed them, even tackling one man to the ground even though the video clearly shows he did not resist arrest. They were put in jail for 24 hours. This is an unbelievable violation of numerous constitutional guarantees.
See: overpasses.org.

Published on Aug 18, 2013 on YouTube:
Make a donation to help with their legal fees here:http://www.gofundme.com/3zsxmk
Survival Doc (the videographer) and Mark M. are arrested for not obeying an officer and Mark was also charged with resisting arrest. Did he resist arrest? You be the judge. Oh, and they never read us our Miranda Rights. We spent 24 hours in the St. Charles Count Jail with Missouri Hwy Trooper Jenkins acting as judge, jury and executioner. (Note: I am the videographer of this video and the activist who was arrested wearing the yellow t-shirt. Near the end, as a cop had my left hand in a handcuff behind my back I am holding the camera in my right hand and as the cop is reaching for my right hand I pass the camera off to Constitution Kim who finishes the recording documenting my arrest.)
Follow SayNoToTyranny on Twitter
Survival Doc's web site: http://www.TheNewSurvivalist.com

Some pictures were taken by unknown sources: 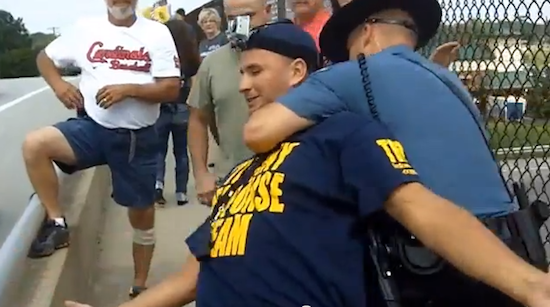