FEELINGS DETERMINE WHICH RESTROOM YOU USE? 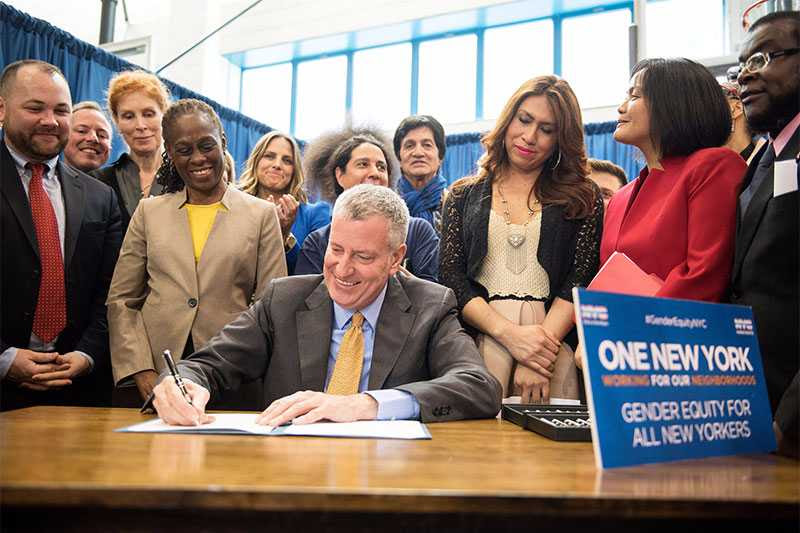 NEW YORK — The Democratic mayor of New York City has signed an executive order that allows those of the opposite sex to use city-owned restroom facilities and locker rooms in accordance with their “gender identity.”
The order applies to parks, pool areas, playgrounds, recreation centers, office buildings and other city-owned facilities, and allows persons to use the desired restrooms without having to first show identification or any medical documentation.
“Today’s order makes it clear that New York City fully supports the right of every New Yorker to use the single-sex facility consistent with their gender identity,” Bill de Blasio said in a statement. “New York City is the birthplace of the fight for LGBT rights, and we continue to lead in that fight so every New Yorker can live with dignity.”
The order applies to both transgender and “gender non-conforming” persons, the latter of whom are defined as those “who do not follow other people’s ideas or stereotypes about how they should look or act based on the female or male sex they were assigned at birth.”
There are an estimated 25,000 residents who identify as transgender or gender non-conforming in New York City.
“Every day, no matter where they go, transgender and gender non-conforming New Yorkers are burdened with worry, that when they need the certainty of privacy for personal needs, it won’t be there for them,” said de Blasio’s wife, Chirlane McCray. “Today, we take a step towards equity for those New Yorkers.”
The order comes just months after the New York City Commission on Human Rights announced new guidelines under the city’s Human Rights Law that may impose fines on employers who use masculine pronouns for male workers who wish to identify as women and vice versa.
As previously reported, the Commission released its interpretive guide in December, which includes a prohibition on “[i]ntentionally failing to use an individual’s preferred name, pronoun or title,” such as “repeatedly calling a transgender woman ‘him’ or ‘Mr.’ when she has made it clear that she prefers female pronouns and a female title.”
The guidelines further state that employers “should not limit the options for identification to male and female only,” as “[s]ome transgender and gender non-conforming people prefer to use pronouns other than he/him/his or she/her/hers, such as they/them/theirs or ze/hir.”
Employers are also banned from having dress codes that would require men to dress as men and women to dress as women or to require workers to use the restroom that correlates with their birth gender. Businesses are likewise required to offer health benefits for employees seeking to obtain sex change treatments.
Violations could result in penalties up to $125,000 and up to $250,000 for transgressions of the law that are considered to be “willfull, wanton or malicious conduct.”
However, not all believe that one must support and affirm a person’s desire to live as those of the opposite sex. As previously reported, Walt Heyer, a 75-year-old man who obtained a sex change operation in the 1980’s to live as a woman for eight years before reverting back to his biological gender, is now sharing his story with the world of how Christ redeemed his life and gave him hope.
“Nobody’s ever born a transgender,” he told the Daily Mail last January. “They’re manufactured as a result of something, a developmental childhood issue that has yet to be determined for many people.”
“All of them have some level of depression, and we’re not treating them,” Heyer lamented. “We’re just cutting off body parts and giving them a new name and a new gender.”
“God designed man; He designed women,” he also said in a video recorded last year. “God will redeem the lives of people who struggle with gender identity issues just like I did. He redeemed my life, and I’ve been free from it as a result of that.”

Posted by John at 6:36 PM Links to this post

The West Virginia legislature successfully overturned the veto of Democratic Gov. Earl Ray Tomblin’s veto on Saturday in a bipartisan effort to enact permitless gun carry in the state.
Beginning June 5, anyone over age 21 who can legally possess a firearm will be allowed to carry it concealed on their person without having to obtain a permit. West Virginia has long allowed permitless open carry but, like most states, required a permit to carry a concealed firearm. With the new law the state will become the eighth in the nation to implement what gun rights activists call “constitutional carry.”
The law also creates a provisional permitting process for those between the ages of 18 and 20 who wish to carry a concealed firearm within the state. Individuals between the ages of 18 and 20 had previously been excluded from the permitting process altogether.
West Virginia’s move to permitless carry marks the continuation of a national trend that began in 2003. Before then, only Vermont allowed law-abiding adults to carry concealed firearms without a permit. The pace accelerated over the last five years, with seven states adopting the policy.
Concealed carry laws vary from state to state, but most adhere to one of three basic structures. The most popular, which is in effect in 34 states, is commonly referred to as a “shall-issue” structure, where applicants must be issued a permit if they pass a background check along with whatever training and identification requirements are set by the state.
The most restrictive type of concealed carry law, adopted by only eight states, is the “may-issue” structure in which applicants can still be denied a permit even if they meet all of the requirements set out by the state. May-issue concealed carry laws often issue very few concealed carry permits to residents.
The last type of gun carry law, adopted by only eight states, is the “Constitutional carry” permitless structure that West Virginia has now approved.
The trend toward less restrictive gun carry laws has been cheered and promoted by gun rights activists at the national and state level. The West Virginia Citizens Defense League, which helped write their state’s law, applauded the bipartisan vote to override the governor’s veto.
“We’re extremely pleased that the legislature stood with West Virginia gun owners, showed their trust in lawful gun owners, and overrode the veto of Governor Tomblin,” Art Thomm, the group’s vice president and head lobbyist, told the Washington Free Beacon. “It’s certainly a great day for West Virginia gun owners.”
The National Rifle Association echoed the West Virginia group’s sentiment. “Self-defense is a fundamental right that must be respected,” Chris Cox, head of the NRA’s lobbying arm, said in a statement. “Law-abiding West Virginians are now free to choose the method of self-defense that best suits their needs. The NRA and our five million members are pleased that the legislature voted in support of West Virginians’ Second Amendment freedoms.”
_______________________________________________________
SEE ALSO:
http://www.thenewamerican.com/usnews/constitution/item/22731-west-virginia-legalizes-permitless-concealed-carry
Posted by John at 6:26 PM Links to this post

how about europe's very existence? 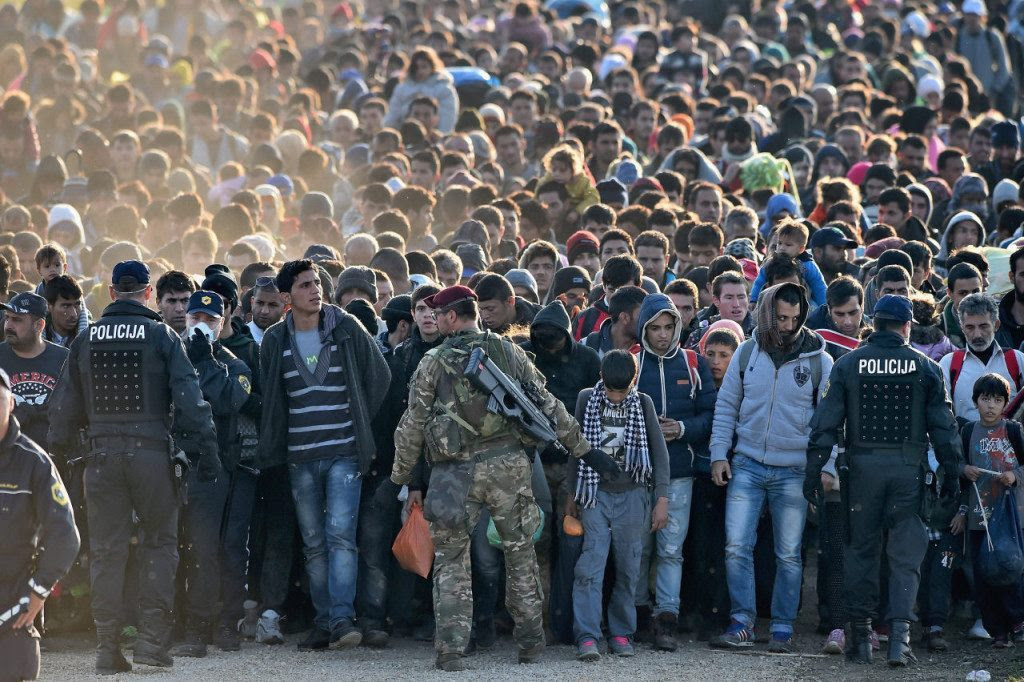 Thousands of migrants march from Croatia into Slovenia as authorities struggle to cope with Europe’s largest migration of people since World War II – October 26, 2015. (Getty)

BY Liam Deacon | Breitbart
SEE: http://www.infowars.com/pope-calls-migrant-crisis-arab-invasion-says-europe-must-rediscover-its-cultural-roots/; republished below in full unedited for informational, educational, and research purposes, from:
http://www.breitbart.com/london/2016/03/05/pope-calls-migrant-crisis-arab-invasion-says-europe-must-rediscover-its-cultural-roots/

Pope Francis has described the European migration crisis as an “Arab invasion”. He said that “Europe weakens” by “forgetting its own history”, but, because of its low birth rate and colonial history, the mass migration could be beneficial.
“Today we can talk about an Arab invasion”, the Roman Catholic leader told the Vatican newspaper L’Osservatore Romano this Thursday. “It is a social fact”.
“How many invasions has Europe experienced in the course of its history?” he asked. “But [Europe] has always been able to overcome herself… increased by the exchange between cultures”, he answered.
Millions of migrants from the Muslim world walked into Europe last year, and more than 131,000 have arrived via the Mediterranean in the first two moths of this year alone – more than the total number who made it in the first half of 2015.
“There’s something that bothers me,” added Pope Francis, who has been considered a relatively liberal Pontiff. “Of course, globalization unites us and thus has positive aspects. But, I think there are good and less good [aspects of] globalization”, he said.
In his view, a good version of globalization would allow humanity to remain “united, but, every people, every nation, retains its identity, its culture, its wealth”.
“The only continent that can bring some unity to the world is Europe,” he went on. “China has perhaps a more ancient culture, more profound. But only Europe has a vocation of universality and of service”, the Pope said.
“If Europe wants to rejuvenate, it must rediscover it’s cultural roots. Of all the Western countries, Europe has the stronger and deeper roots.
“Through colonization, these roots have even reached the new world. But forgetting its own history, Europe weakens. It is then that it risks becoming an empty place”, he stated.
Next he addressed the European Union (EU). “Sometimes I wonder where you’ll find a Schumann or Adenauer, these great founders of the European Union”, he said, appearing to imply that the EU was in need of reform.
His criticism was cryptic: “It [the EU] confuses politics with circumstantial solutions. Of course, you must come to the negotiating table, but only if you are aware that you have to lose something because we all earn.”
“Your secularism is incomplete… We need a healthy secularism”, he added, taking aim at France’s fiercely secular constitution. “In the Hispanic world it is said that France is the eldest daughter of the Church, but not necessarily the most faithful daughter”.
Finally, he seemed to recognize that radical Islam was the root cause of much violence in the world. “We work hard to build dialogue between Christians and Muslims… Every religion has its extremists. The ideological degeneration of religion is at the origin of the war”, he concluded.
_______________________________________________________

Posted by John at 6:17 PM Links to this post