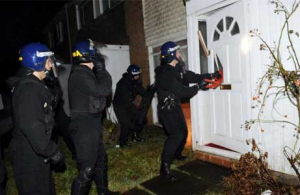 SEE: http://www.thenewamerican.com/usnews/constitution/item/19642-lawsuit-filed-in-homeschool-pepper-spray-incident;
EXCERPT:
Glidden and Sheriff Darren White, working together, forced entry through the closed front door and attacked Jason and Laura, who were still reeling from the previous attack by Glidden. Wrote HSLDA’s Jim Mason:
Together they forced open the door and found Laura and Jason lying on the floor. Glidden sprayed Laura in the face a second time while White sprayed Jason and tried to turn him over onto his stomach.
When the Hagan’s dog started barking, the officers also sprayed it and threatened to shoot it if it didn’t shut up. Having overpowered the Hagans, the officers handcuffed them both, arrested them, charged them with resisting arrest and child endangerment, and booked them into the county jail. The kids were remanded to the tender mercies of social services for the duration.
______________________________________________________________

SEE: http://www.thenewamerican.com/usnews/politics/item/19634-obama-s-latest-executive-order-263-million-federal-police-aid-program;
EXCERPT:
The Washington, D.C. newspaper The Hill  noted that Obama's new local police program would cost taxpayers some $263 million over three years ($75 million of which would purchase the cameras), all spent without so much as a “by your leave” from Congress. Sure, Obama talked about working with Congress in the speech excerpted above. But he also made abundantly clear that the new program would spend the specified money whether Congress sent him more funds or not. Obama essentially announced that he had found $263 million under the seat cushions of the White House couch that he could spend at whim.

AMNESTY FOR ONE?
THE PARDONING CEREMONY FOR THANKSGIVING SPARES THE LIFE WITH ONE WAVE OF THE LEFT HAND
FROM THE BENEVOLENT MONARCH;
OBAMA'S SINGLE WHITE BENEFICIARY OF AN EXECUTIVE ORDER:

BUT WILL ALL THE OTHER JIVE WHITE TURKEYS
SURVIVE UNSCATHED? NOT IF HE CAN HELP IT!
NOT A SINGLE FINGER RAISED FOR U.S. CITIZENS
AND THEIR CONSTITUTIONAL RIGHTS

Farrakhan Brands Black Leaders as Compromisers; Calls for Retribution to Bring Equanimity With Whites Under a New Race War; Calls For Obama To Confront White Police; Calls For Black Separation:

Published on Dec 4, 2014
The government is taking away our constitutional rights at every turn. Will the constitution even be relevant anymore? Will we turn into a dictatorship or Monarchy by the end of this decade.

Published on Jan 10, 2014
Alex continues with Constitutional Law Professor Elizabeth Price Foley on the topic of the rampant abuses of power by the Obama administration and the dangers of the approach of Tyrrany on the horizon.
http://www.elizabethpricefoley.com/

At the Belle hotel in Baton Rouge on Monday, December 1, 2014, the Black Conservatives Fund revealed footage of Democratic Mayor Don Cravins, Sr. encouraging voters to vote twice. He went on to say that if they reelected Earl Taylor as District Attorney he wouldn't prosecute them for voting twice.