ROBERT SPENCER: WHY ISN'T OBAMA CHARGED WITH TREASON FOR HIS IRAN DEALINGS, SUCH AS HELPING THEM SKIRT SANCTIONS?

ROBERT SPENCER: WHY ISN'T OBAMA CHARGED WITH TREASON FOR HIS IRAN DEALINGS?
Jihad Watch director Robert Spencer discusses new revelations about how the Obama administration helped the Islamic Republic of Iran skirt sanctions, and discusses how Obama's dealings with Iran are arguably treasonous.

Posted by John at 3:18 PM Links to this post

Establishment collaborates to dehumanize conservatives ahead of violent uprising

Posted by John at 3:11 PM Links to this post

Street art fights back against #resistance attacks on conservatives

SEE: https://www.infowars.com/republicans-are-forbidden-nazi-style-democrat-propaganda-floods-la/; republished below in full unedited for informational, educational and research purposes:
Street artist Sabo and his Unsavory Agents placed Nazi-style propaganda posters around Los Angeles this week in an effort to bring attention to growing anti-conservative rhetoric being promoted by the left.

One poster declares “Republicans Are Forbidden,” in both German and English and another orders Dems to “Buy Only At Democrat Shops.”
Sabo gave a statement to Daily Wire Wednesday, saying the project was inspired by the Red Hen restaurant’s treatment of Sarah Sanders last week and admitting “it sent a chill” through him.
“It seems the Democrat owners don’t welcome the patronage of Republicans,” he said.
“Recently while visiting Austin, Texas me and my party were asked to leave no less than three bars because one of us dared wear a MAGA hat.”
Sabo continued, “We were told that our kind weren’t welcomed there. What the hell ‘kind’ is that I wondered. Patriots, Republicans, Americans? It really freaked me out.”
The prolific street artist says he created the signs to remind people that this has happened before and that we should learn from the past.
See photos of the Democrat-Nazi propaganda posters below: 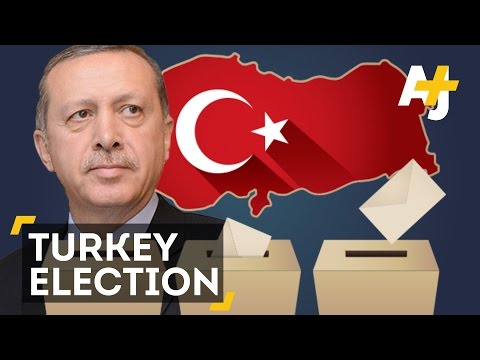 TURKEY ELECTION: ERDOGAN DECLARES A WIN FOR "DEMOCRACY" DESPITE CORRUPTION, FRAUD, ARRESTS
BY CHRISTINE DOUGLASS-WILLIAMS
SEE: https://www.jihadwatch.org/2018/06/turkey-election-erdogan-declares-a-win-for-democracy-despite-corruption-fraud-arrests;
Posted by John at 10:36 AM Links to this post

PEDIATRICIANS ON TRANSGENDERISM: A MENTAL ILLNESS IS NOT A CIVIL RIGHT~"TRANSGENDER MEDICINE" A TERRIBLE FRAUD

TRANSGENDERISM:
A MENTAL ILLNESS IS NOT A CIVIL RIGHT
DR. MICHELLE CRETELLA
TFP Student Action interviews Dr. Michelle Cretella, M.D., president of the American College of Pediatricians. She debunks the lies behind transgender ideology with sound science and denounces the new wave of child abuse caused by the transgender movement. Read the transcript of the entire interview: https://www.tfpstudentaction.org/blog...
The terrible fraud of
'transgender medicine'
At the Teens4Truth Conference, Ft. Worth, TX, Nov. 18, 2017. A physician who was in the Johns Hopkins Univ. Hospital group where "transgender medicine" was developed describes the lies, bad medicine, and fraud behind that movement. Quentin Van Meter, MD, FCP is a pediatric endocrinologist. He is a Fellow of the American College of Pediatricians and the American Association of Clinical Endocrinologists. 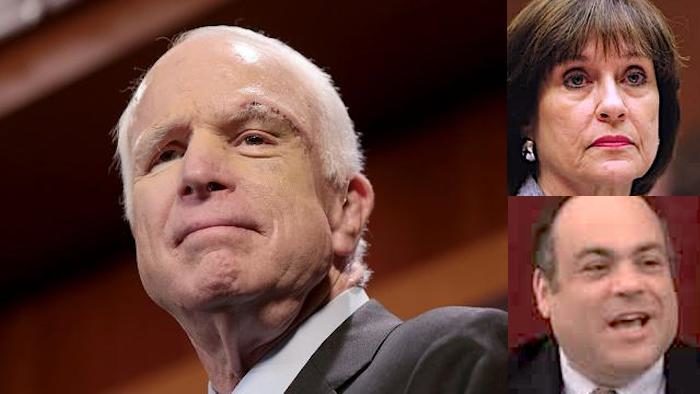 Little is as unnerving as trouble with the IRS, especially if you haven’t done anything wrong. That happened repeatedly during President Barack Obama’s administration, as his IRS enthusiastically targeted conservative groups.

We’re now understanding why the Congress didn’t do much of anything about it.
Judicial Watch released internal IRS documents revealing that Sen. John McCain’s former staff director and chief counsel on the Senate Homeland Security Permanent Subcommittee, Henry Kerner, urged top IRS officials, including then-director of exempt organizations, Lois Lerner, to “audit so many that it becomes financially ruinous.” President Trump, presumably unaware of these new facts, appointed Kerner as Special Counsel for the United States Office of Special Counsel.
The explosive exchange was contained in notes taken by IRS employees at an April 30, 2013, meeting between Kerner, Lerner, and other high-ranking IRS officials. Just ten days following the meeting, Lois Lerner admitted that the IRS had a policy of improperly and deliberately delaying applications for tax-exempt status from conservative non-profit groups.
Lerner and other IRS officials met with select top staffers from the Senate Governmental Affairs Committee in a “marathon” meeting to discuss concerns raised by both Sen. Carl Levin (D-MI) and Sen. John McCain (R-AZ) that the IRS was not reining in political advocacy groups in response to the Supreme Court’s Citizens United decision. Senator McCain had been the chief sponsor of the McCain-Feingold Act and called the Citizens United decision, which overturned portions of the Act, one of the “worst decisions I have ever seen.”
In the full notes of an April 30 meeting, McCain’s high-ranking staffer Kerner recommends harassing non-profit groups until they are unable to continue operating. Kerner tells Lerner, Steve Miller, Nikole Flax, then chief of staff to IRS commissioner, and other IRS officials, “Maybe the solution is to audit so many that it is financially ruinous.” In response, Lerner responded that “it is her job to oversee it all:”
Henry Kerner asked how to get to the abuse of organizations claiming section 501 (c)(4) but designed to be primarily political. Lois Lerner said the system works, but not in real time. Henry Kerner noted that these organizations don’t disclose donors. Lois Lerner said that if they don’t meet the requirements, we can come in and revoke, but it doesn’t happen in a timely manner. Nan Marks said if the concern is that organizations engaging in this activity don’t disclose donors, then the system doesn’t work. Henry Kerner said that maybe the solution is to audit so many that it is financially ruinous. Nikole noted that we have budget constraints. Elise Bean suggested using the list of organizations that made independent expenditures. Lois Lerner said that it is her job to oversee it all, not just political campaign activity.
Judicial Watch previously reported on the 2013 meeting. Senator McCain then issued a statement decrying “false reports claiming that his office was somehow involved in IRS targeting of conservative groups.” The IRS previously blacked out the notes of the meeting, but we found the notes among subsequent documents released by the agency.
Judicial Watch separately uncovered that Lerner was under significant pressure from both Democrats in Congress and the Obama DOJ and FBI to prosecute and jail the groups the IRS was already improperly targeting. In discussing pressure from Sen. Sheldon Whitehouse (D-RI) to prosecute these “political groups,” Lerner admitted, “it is ALL about 501(c)(4) orgs and political activity.”

The April 30, 2013 meeting came just under two weeks prior to Lerner’s admission during an American Bar Association meeting that the IRS had “inappropriately” targeted conservative groups. In her May 2013 answer to a planted question, in which she admitted to the “absolutely incorrect, insensitive, and inappropriate” targeting of Tea Party and conservative groups, Lerner suggested the IRS targeting occurred due to an “uptick” in 501 (c)(4) applications to the IRS but in actuality, there had been a decrease in such applications in 2010.
On May 14, 2013, a report by Treasury Inspector General for Tax Administration revealed: “Early in Calendar Year 2010, the IRS began using inappropriate criteria to identify organizations applying for tax-exempt status” (e.g., lists of past and future donors). The illegal IRS reviews continued “for more than 18 months” and “delayed processing of targeted groups’ applications” in advance of the 2012 presidential election.
All these documents were forced out of the IRS as a result of an October 2013 Judicial Watch Freedom of Information (FOIA) lawsuit filed against the IRS after it failed to respond adequately to four FOIA requests sent in May 2013 (Judicial Watch, Inc. v. Internal Revenue Service (No. 1:13-cv-01559)). Judicial Watch is seeking:
The Obama IRS scandal is bipartisan – McCain and Democrats who wanted to regulate political speech lost at the Supreme Court, so they sought to use the IRS to harass innocent Americans. The Obama IRS scandal is not over. Judicial Watch continues to uncover smoking gun documents that raise questions about how the Obama administration weaponized the IRS, the FEC, FBI, and DOJ to target the First Amendment Rights of Americans.
Tom Fitton is President of Judicial Watch.
Posted by John at 9:46 AM Links to this post

FORMER SECRET SERVICE AGENT FILES SUIT AGAINST CLINTONS & PODESTA
FOR CONSPIRACY CHARGES
Gary Byrne joins Alex Jones live via Skype to break down the lawsuit he has filed against Bill, Hillary, and Podesta for a criminal conspiracy waged against him during his time as a Secret Service Agent.

BY DAILY MAIL
SEE: https://www.infowars.com/child-abuse-charity-head-arrested-for-attempted-child-rape/; republished below in full unedited for informational, educational and research purposes:
The head of a charity that campaigns against sexual violence has been arrested in New York for child pornography and allegedly trying to meet with children as young as two for sex.
Joel Davis, 22, is accused of trying to set up sexual encounters between himself and young children, as well as soliciting an undercover FBI agent to send sexually explicit videos of minors.
The New Yorker was arrested on Tuesday on child sex abuse and child pornography charges.
Davis is the chairman of the International Campaign to Stop Rape and Gender Violence in Conflict – an organization devoted to ending sexual violence.
Read more
Also watch the following:

RADICAL MUSLIM LINDA SARSOUR OF BAY RIDGE, BROOKLYN, N.Y.: "ALEXANDRA OCASIO-CORTEZ IS THE HOPE WE HAVE BEEN WAITING FOR"

Linda Sarsour: Alexandria Ocasio-Cortez Is the Hope We Have Been Waiting For

Posted by John at 8:42 AM Links to this post

‘Yesterday when I confronted her on Capitol Hill, she ASSAULTED me,’ says Laura Loomer

SEE: https://www.infowars.com/reporter-files-assault-charges-against-maxine-waters-following-encounter/; republished below in full unedited for informational, educational and research purposes:
Investigative reporter Laura Loomer filed a police report Tuesday accusing Democrat congresswoman Maxine Waters of assaulting her.
Loomer announced on Twitter she had filed charges against Waters with the Capitol Police, claiming, “Yesterday when I confronted her on Capitol Hill, she ASSAULTED me. She hit my hand, then she swatted me in the face twice w/ her papers.”

Loomer confronted the California House rep on camera in Washington DC earlier that day, following up on recent comments encouraging Democrats to publicly confront Trump supporters and admin officials.
Laura Loomer Confronts Maxine Waters
In the video, Waters rejected Loomer’s questions asking what places Trump supporters can go without fear of being harassed, as she proceeds to bat Loomer’s camera away while telling her to schedule an appointment.

Posted by John at 7:48 AM Links to this post