ITALY IN STATE OF COLLAPSE~OVERWHELMED AS 13,500 AFRICAN MIGRANTS ARRIVE IN PAST TWO DAYS 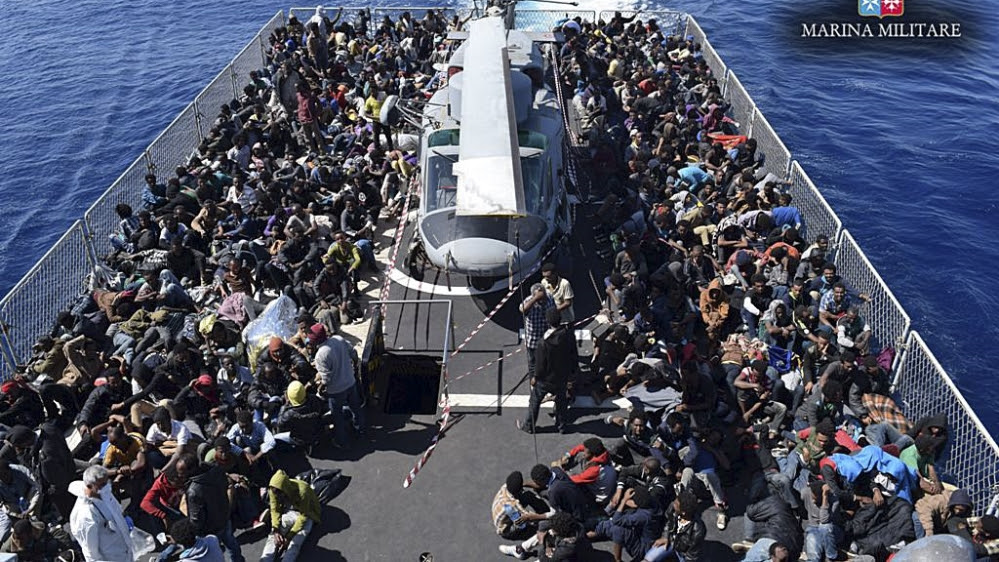 State of “collapse”: Italy overwhelmed as 13,500 African migrants arrive in past two days

Italy is doomed to go the way of Germany and Sweden unless it finds a solution quickly to its sudden migrant “invasion” problem, before even more arrive:


The exodus from Libya to the Italian coast has continuing unabated with no visible action on the part of the Italian government or the European Union to halt it.

The Islamic State has  expressed its plan to “conquer Rome” as central to its mission to “defeat Christianity.” An Islamic State video also warned that “Libya could be used as a springboard for attacks” in Italy. More problematic for Italy is that Libyan president Fayez al-Sarraj has been refusing to take back his own people who are sent back.
In April, Italy faced a similar crisis of migrants flooding in, and sent 6,242 migrants back home to North African countries.


Italy’s migrant welcome centers are in a state of “collapse” as huge waves of African migrants take advantage of the temperate climate to make the crossing from Libya to the Italian peninsula.
On Tuesday, 8,500 African migrants are reaching Italian shores aboard 14 different ships, adding to the 5,000 who arrived on Monday. The massive arrivals have led local media as well as politicians to speak of an authentic immigrant “invasion” exceeding the country’s capacity of assimilation.
Officials reported on June 15 that more than 65,000 migrants had arrived since the beginning of the year, but that was prior to the latest influx. Figures for the year now stand at 73,380 migrants into Italy, or a rise of 14.42 percent over the same period in 2016, when then-record arrivals had reached 64,133.
The exodus from Libya to the Italian coast has continuing unabated with no visible action on the part of the Italian government or the European Union to halt it.”…
The head of Italy’s Northern League party, Matteo Salvini, expressed his exasperation in a tweet to his followers, noting that Tuesday’s arrival of 8,500 illegal immigrants onto Italian soil was “f---ing enough.” CONGRESS RIPS OBAMA ON COVER UP OF
FAST & FURIOUS GUN RUNNING
BY ALEX NEWMAN
SEE: https://www.thenewamerican.com/usnews/crime/item/26360-congress-rips-obama-on-cover-up-of-fast-and-furious-gun-running;
Despite leaving office without facing justice, Obama and his top administration officials are still not out of the woods yet on the “Fast and Furious” scheme to arm Mexican drug cartels under the guise of conducting an “investigation.” This month, the House Oversight Committee and the Senate Judiciary Committee released a damning report blasting the former administration for the scandal and the subsequent ham-handed attempt to cover it up, including obstruction of Congress and shady dealings with the press and victims' families. Many key documents are still being withheld. Unsurprisingly, the establishment media has completely ignored the latest developments in the explosive story. But with more facts coming out, activists and victims' families hope former officials involved in the deadly gun-running program may still be brought to justice for a wide range of crimes.
Operation Fast and Furious was an Obama program in which the Bureau of Alcohol, Tobacco, Firearms and Explosives (ATF) helped put heavy weapons into the hands of murderous drug cartels in Mexico. The whole scandal exploded when a federal agent was murdered with a Fast and Furious gun. As the story threatened to bring down key Obama officials, the spin was put out that it was all part of a supposed “investigation” into “drug cartels.” However, massive amounts of evidence emerged in the subsequent months and years suggesting that it was actually a criminal operation to blame the Second Amendment for violence, with the supposed targets of the alleged “investigation” already on the FBI payroll. Indeed, top lawmakers and gun-rights activists have said the operation was intended to be exploited by Obama to push gun-control, but it blew up in the administration's face when federal agents blew the whistle.