TRUMP SAYS HE WILL OPEN THE GOVERNMENT FOR THREE WEEKS~DEMOCRATS APPEAR TO HAVE CAVED ON BORDER WALL SECURITY & IMMIGRATION REFORM
"WE HAVE REACHED A DEAL"
INCLUDES NO WALL FUNDING?

Posted by John at 4:42 PM Links to this post

BY PAUL JOSEPH WATSON
SEE: https://www.infowars.com/cnn-producer-admits-he-was-waiting-outside-roger-stones-house-an-hour-before-arrest/; republished below in full unedited for informational, educational and research purposes:
Exclusive First Statement From Roger Stone After His Arrest
WATCH INFOWARS’ LIVE COVERAGE OF STONE’s ARREST HERE
CNN producer David Shortell admitted that he was “waiting” outside Roger Stone’s house at 5am, an hour before FBI agents and police arrived to arrest the former Donald Trump associate.
Stone was arrested at 6am at his home in Ft. Lauderdale, Fla on a seven-count indictment which includes one count of obstruction, five counts of making false statements and one count of witness tampering.
However, Shortell subsequently gave an interview with New Day host Alisyn Camerota during which he admitted, while smiling throughout, that “we were here at 5am waiting for whatever was going to happen – it was dark – 6am just after the hour about a half dozen police vehicles with sirens….pulled in front of this Ft. Lauderdale home where Roger Stone lives.”
CNN‏Verified account @CNN

CNN producer @davidgshortell describes the moment Roger Stone was taken into custody by the FBI. The longtime Donald Trump associate has been indicted by a grand jury on charges brought by special counsel Robert Mueller https://cnn.it/2RcoLHS

Correspondent Alex Newman discusses the suspicious pretenses of Roger Stone’s arrest this morning. Newman, who has interviewed Roger Stone, questions the motives behind the arrest, and even argues that it’s the work of the deep state at hand.
Related links:
The New American's interview with Roger Stone

Posted by John at 4:36 PM Links to this post 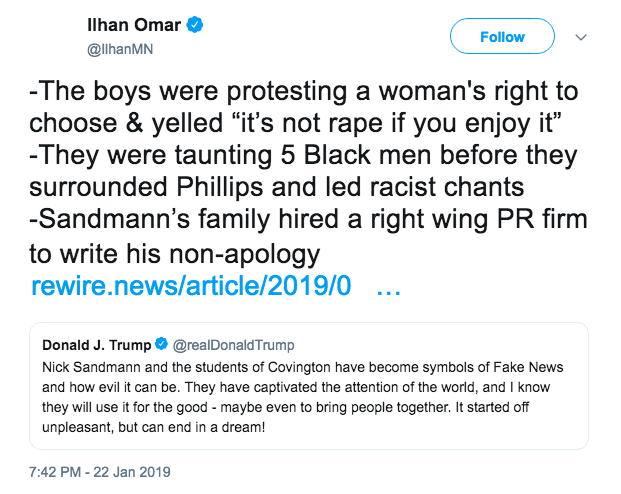 What Will Congress Do?

BY R. CORT KIRKWOOD
SEE: https://www.thenewamerican.com/usnews/item/31289-muslim-rep-defamed-convington-boys-in-now-deleted-tweet-what-will-congress-do?vsmaid=3108&vcid=3987; republished below in full unedited for informational, educational and research purposes:
The Muslimas whom the voters of Michigan and Minnesota sent to Congress are making quite a name for themselves — a bad name.
Representative Rashida Tlaib of Michigan’s 13th district, who took her oath of office on a Koran, famously told a group of leftist subversives that “we’re going to impeach the motherf***er,” a reference to the plan among Democrats to impeach President Trump. Tlaib, the daughter of Palestinian immigrants, thinks she’s in Congress to represent “Palestine,” not her constituents.
Representative Ilhan Omar (shown) may even be more of an embarrassment and more exemplify the clash of cultures that often accompanies Third World immigration to the United States. Omar started her career in Congress by ridiculing the Christian faith of Vice President Mike Pence. Then without evidence, she claimed that Senator Lindsey Graham, the Republican from South Carolina, was “compromised,” a veiled accusation that Graham might be a closeted homosexual.
And now we learn the Mogadishu-born immigrant briefly joined the seething social-media lynch mob that falsely accused the boys of Covington Catholic High of harassing and otherwise disrespecting a “Native American elder” during a “confrontation” at the Lincoln Memorial.
Omar posted then deleted a tweet that falsely accused the Covington boys of terrible things.
Questions: Will they sue her for defamation?
And will the GOP’s politically correct posse on Capitol Hill, which so quickly turned on one of its own after he was falsely accused of supporting white supremacy, demand action as quickly on the hijab-adorned Democrat?
The Tweet
Having distinguished herself by ridiculing Pence and defaming Graham, the Somali immigrant joined the anti-Covington lynch mob after the leftist media wove a false narrative about their encounter with Nathan Phillips, the left-wing activist who confronted the boys at the Lincoln Memorial during the March for Life on January 18. Phillips, of course, has a violent criminal past and lied about his service in the Marine Corps.
But Omar’s finger on the Twitter trigger was quick. She tweeted multiple big lies, all of which are defamatory and possibly grounds for a lawsuit.
Wrote Omar:
-The boys were protesting a woman's right to choose yelled “it’s not rape if you enjoy it”
-They were taunting 5 Black men before they surrounded Phillips and led racist chants
-Sandmann’s family hired a right wing PR firm to write his non-apology
In fact, the boys in question were not chanting any such thing, the “5 black men” taunted the white boys and the Indians with viciously racist chants, and they did not surround Phillips. The drumming, chanting “Native American elder” confronted them. Then he led a raiding party to the Basilica of the Shrine of the Immaculate Conception at Catholic University.
Anyway, the tweet inspired this comeback from Robert Barnes, the lawyer who offered to represent the boys pro bono: “This is libel. Retract, or get sued.”
Omar deleted the tweet.
That might not help her case, given that she has 450,000 followers on Twitter, and of course, the allegations in her tweet constituted per se defamation. They were defamatory on their face.
Barnes also threatened to go after the reporters whose vicious attacks on the boys and false reporting about Phillips have inspired crazy leftists to threaten them and their families.
Barnes, who represented actor Wesley Snipes, gave the media 48 hours to retract their statements.
Will Congress Pass a Resolution
Omar’s tweet should, it would seem, invite action from Congress, and not just Republicans, although they should lead the crusade if their Democratic colleagues can’t or won’t move against the anti-Christian legislator.
Last week, after the New York Times published a story containing quotes that suggested Iowa’s GOP Representative Steve King supports “white supremacy,” Democrats erupted in fury. Terrified Republicans collapsed in hysterics and ignored King’s explanation. The Times, he said, garbled his remarks and because of a punctuation error, created a false impression.
Although Democrats feared censuring King because of their own loose cannons such as Tlaib, they proposed and with hearty Republican support passed a resolution condemning “white supremacy.”
But unlike Omar, King didn’t attack anyone. He said nothing that was untrue. Indeed, the Times erred and imputed to King beliefs he does not espouse.
Omar flat-out lied. She defamed those high-school boys. Then she deleted her lies.
As yet, the leaders on Capitol Hill have not condemned her.
_____________________________________________________________
SEE ALSO:
https://www.jihadwatch.org/2019/01/muslim-rep-ilhan-omar-called-for-lighter-sentences-for-muslims-who-tried-to-join-isis
_____________________________________________________________ 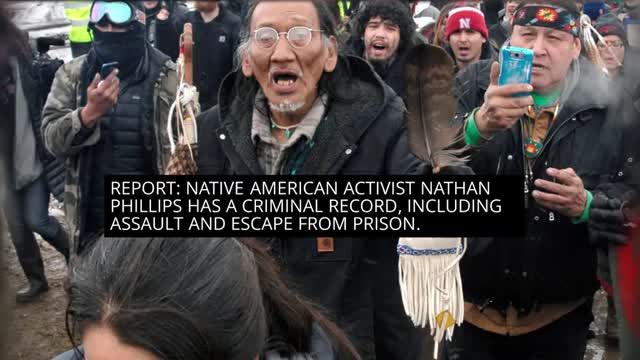 Tried To Disrupt Mass at Basilica

BY R. CORT KIRKWOOD
SEE: https://www.thenewamerican.com/usnews/crime/item/31288-indian-drummer-was-violent-criminal-escaped-jail-tried-to-disrupt-mass-at-basilica?vsmaid=3108&vcid=3987; republished below in full unedited for informational, educational and research purposes:
In the matter of Indian activist Nathan Phillips, it seems, the media speak with a forked tongue.
The heretofore relatively unknown agitator, who became a left-wing hero after he provoked a confrontation with Catholic high-school boys protesting abortion at the March for Life, didn’t just fake his military past. He has also a rap sheet that shows he was a violent criminal.
And he had a big problem with the firewater.
Of course, the media didn’t look into Phillips’ past before they portrayed the bedraggled “Native American elder” as a “victim” of “privileged” white boys who ridiculed his drum-pounding and chanted gibberish.
Nor have they said much about his attack on the Holy Sacrifice of the Mass at the Basilica of the National Shrine of the Immaculate Conception.
Story Unravels
The Fake News story about the confrontation at the Lincoln Memorial between Phillips and the boys of Covington Catholic High began with the usual leftist narrative. But it quickly collapsed after a full video account surfaced, which undermined the short video with which leftists in the media gleefully savaged the boys.
Such was the hysteria that the boys and their families received death threats. Representative Ilhan Omar, the hijab-wearing, anti-Christian, Muslim Democrat from Minnesota, attacked them in a defamatory, now-deleted tweet.
But then, as is typical, the wheels came off the wagon that pulled the leftist narrative.
Nathan Phillips isn’t the man the media said he was. The put-upon Omaha Indian has something of a checkered past. Very checkered.
The Washington Examiner has disclosed that Phillips was a violent criminal who escaped jail.
As The New American reported yesterday, when Phillips enlisted in the Marine Corps Reserve in 1972, he enlisted under another name, Nathaniel Stanard. In his late teens and early 20s, the Examiner found, Phillips, then Stanard, was a dangerous and violent criminal who tangled more than once with John Barleycorn — and lost.
At 19, Phillips was “charged with escaping from the Nebraska Penal Complex where he was confined May 3,” the newspaper reported, citing an article in the Lincoln Star.
As well, “he pleaded guilty to assault on June 19, 1974, and was fined $200. In addition, he was charged with underage possession of alcohol in 1972, 1973, and 1975, as well as negligent driving. A destruction of property charge against him was dropped in August 1973, but Phillips was sentenced to one year probation for a related charge of alcohol possession by a minor. In December 1978, he was charged with driving without a license.”
But even before the Examiner disclosed Phillips’ lengthy rap sheet, news surfaced that he lied about his military record. He told Vogue magazine that he was “recon ranger” in the Marines. And the media turned Phillips into a “Vietnam veteran,” and “Native American elder” who “fought in Vietnam.”
Of course, it was all false.
Phillips was not a “recon ranger” and didn’t serve in Vietnam. He was a refrigerator repairman who never left the states. And he went AWOL — Absent Without Leave — multiple times.
To his credit, it appears that Phillips never claimed he fought in Vietnam. The media simply assumed he did. And that, as former Navy SEAL Don Shipley said, made the narrative even better, or conversely, made the scene at the Lincoln Memorial “look even worse, him being a Vietnam vet and getting harassed.”
Shipley posted a video on YouTube that exposed the military record of Phillips.
Attack on the Mass
But the former jailbird and Marine Corps refrigerator repairman wasn’t satisfied with nearly starting a riot at the Lincoln Memorial.
Phillips and some fellow “Native American activists” went to the Basilica of the National Shrine of the Immaculate Conception at Catholic University. There, they demanded that the boys be punished, and, somewhat amusingly, that the papal bull encouraging the age of discovery be “revoked.”
A spokesman for the basilica confirmed for the Catholic News Agency that Phillips led the raid that aimed to disrupt a special Mass on January 19.
“A group of approximately 50 individuals attempted to gain entrance to the basilica while chanting and hitting drums,” the spokesman told CNA. They assembled “across the road from the shrine before setting off toward its main entrance, chanting and playing drums.”
Security guards, CNA reported, were forced to lock the doors to keep the angry protesters out.
A California seminarian told CNA that protesters pounded on the basilica’s doors.

Posted by John at 4:00 PM Links to this post

VIDEO: GLAZOV ON “AMERICA CAN WE TALK?” DISCUSSING “JIHADIST PSYCHOPATH”

VIDEO: GLAZOV ON “AMERICA CAN WE TALK?” DISCUSSING “JIHADIST PSYCHOPATH”

Debbie Georgatos talks to Frontpage Editor about how Islamic Supremacists are charming, seducing and devouring us.

SEE: https://www.frontpagemag.com/fpm/272675/video-glazov-america-can-we-talk-discussing-frontpagemagcom; republished below in full unedited for informational, educational and research purposes:

[Jamie Glazov will be speaking at Beverly Hills Hotel on Feb. 6 about his new book: Jihadist Psychopath: How He Is Charming, Seducing, and Devouring Us. Register HERE. Order the book HERE.]
In this new episode of America Can We Talk?, host Debbie Georgatos talks to Frontpage Editor Jamie Glazov about his new book, Jihadist Psychopath. Jamie reveals how Islamic Supremacists are charming, seducing and devouring us -- and how President Trump offers tremendous hope that the tide can be turned. Don't miss it!
[To learn more about Jamie's unveiling of the Jihadist Psychopath's plantation -- and how we can escape from it, CLICK HERE.]

Posted by John at 3:22 PM Links to this post