"Common Core: Dangers And Threats To American Liberty And Education":

Posted by John at 2:37 PM Links to this post 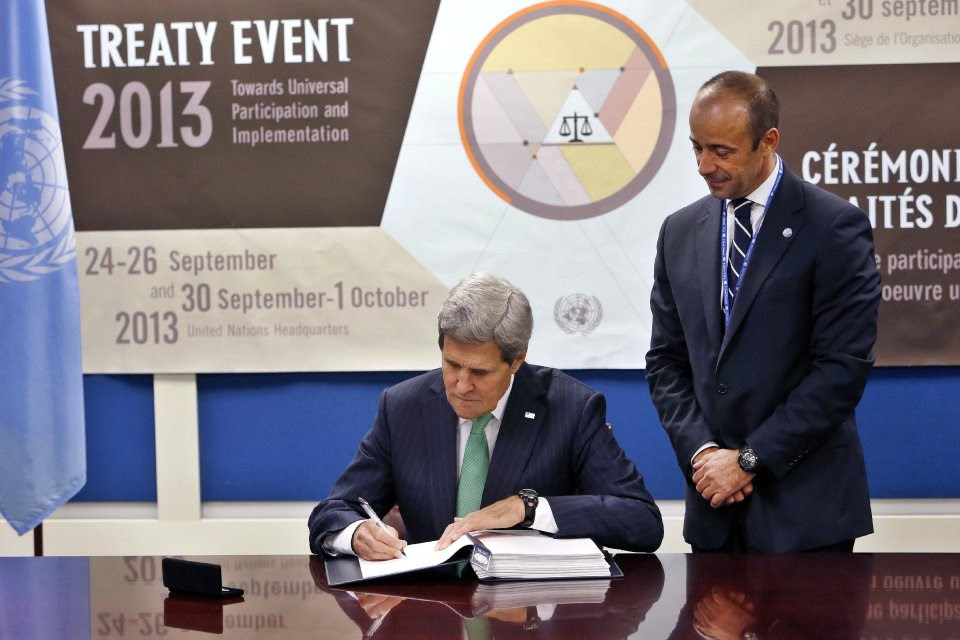 The New American has reported here
http://thenewamerican.com/usnews/constitution/item/16618-kerry-signs-un-arms-trade-treaty-civilian-disarmament-advancing, that John Kerry has signed thew United Nations Arms Trade Treaty for the United States, in violation of the Constitution and the will of the American people and their representatives.
See:

Good morning, everybody. Good morning, all – Mr. Under Secretary-General and Mr. Legal Counsel, I believe. And thank you very much for the privilege of being here.

On behalf of President Obama and the United States of America, I am very pleased to have signed this treaty here today. I signed it because President Obama knows that from decades of efforts that at any time that we work with – cooperatively to address the illicit trade in conventional weapons, we make the world a safer place. And this treaty is a significant step in that effort.
I want to be clear both about what this treaty is, but I also want to be clear about what it isn’t. This is about keeping weapons out of the hands of terrorists and rogue actors. This is about reducing the risk of international transfers of conventional arms that will be used to carry out the world’s worst crimes. This is about keeping Americans safe and keeping America strong. And this is about promoting international peace and global security. And this is about advancing important humanitarian goals.
I also want to be clear about what this treaty is not about. This treaty will not diminish anyone’s freedom. In fact, the treaty recognizes the freedom of both individuals and states to obtain, possess, and use arms for legitimate purposes. Make no mistake, we would never think about supporting a treaty that is inconsistent with the rights of Americans, the rights of American citizens, to be able to exercise their guaranteed rights under our constitution. This treaty reaffirms the sovereign right of each country to decide for itself, consistent with its own constitutional and legal requirements, how to deal with the conventional arms that are exclusively used within its borders.
What this treaty does is simple: It helps lift other countries up to the highest standards. It requires other countries to create and enforce the kind of strict national export controls that the United States already has in place. And I emphasize here we are talking about the kind of export controls that for decades have not diminished one iota our ability in the United States as Americans to exercise our rights under the constitution – not one iota of restriction in the last decades as we have applied our standards.
So here’s the bottom line: This treaty strengthens our security, builds global security without undermining the legitimate international trade in conventional arms which allows each country to provide for its own defense. I want to congratulate everyone who has worked hard in order to help bring this agreement into fruition, including our international partners and the civil society organizations’ commitment was absolutely vital to winning support for this treaty. The United States is proud to have worked with our international partners in order to achieve this important step towards a more peaceful – and a more peaceful world, but a world that also lives by international standards and rules.
And we believe this brings us closer to the possibilities of peace as well as a security, a higher level of a security, and the promotion and protection of human rights. That, frankly, is a trifecta for America, and that’s why we’re proud to sign this treaty today.
Thank you very much. (Applause.)
________________________________________________________________________
See The New American's article:


"Treaties Violating the Constitution Are Not Law of the Land":

http://thenewamerican.com/usnews/constitution/item/16621-attn-john-kerry-treaties-violating-the-constitution-are-not-law-of-the-land.
Posted by John at 2:22 PM Links to this post